Minutes away from the sunset at Pointe du Raz, Brittany, France | © Hristos Fleturis

There is one small place on the French west coast, where the sun and the Atlantic Ocean come together. It’s called Finistère, which means ‘End of the World’, and it’s the perfect place to watch a sunset. 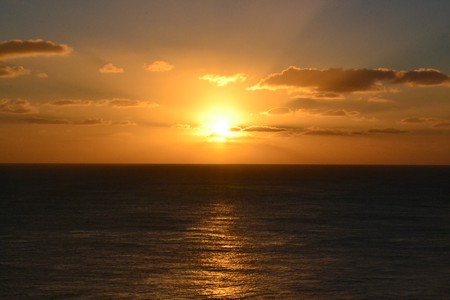 Pointe du Raz is a rocky place in western Brittany. It is the second furthest point in the west of France. The westernmost point is a bit further north of Brittany, near Brest, called Pointe de Corsen.

Date: sometime during this winter 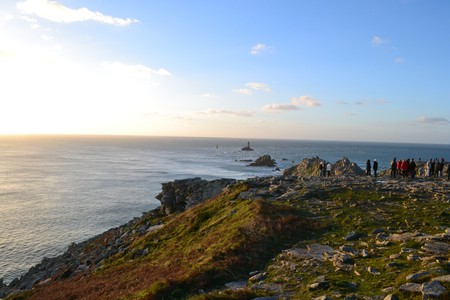 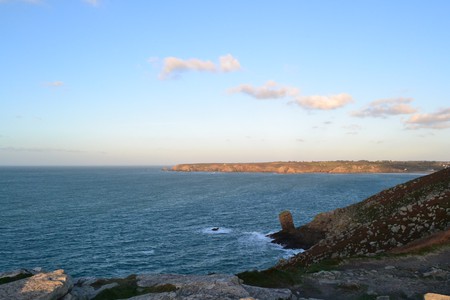 The name comes from the Breton and old Norse word raz or ras, meaning ‘strong current of water.’ Here, you are at the point where strong currents meet, with calm water on one side and big waves on the other. 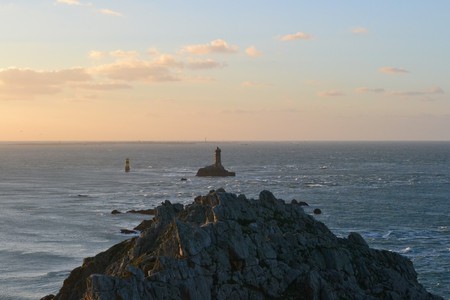 What makes this sunset particularly special is the lighthouse that can be seen in the distance called La Vieille (The Old Lady). It has been there since 1887 and continues to light the way on the sea. Farther away into the ocean, you can see the Ar Men Lighthouse as well, and beyond that point, nothing else but sea. 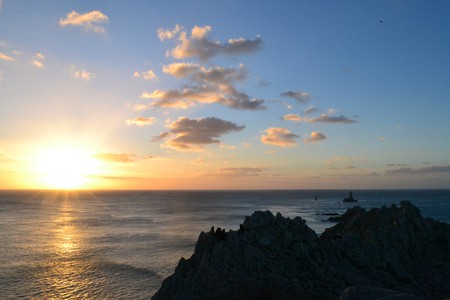 The rocks give way to a beautiful view. 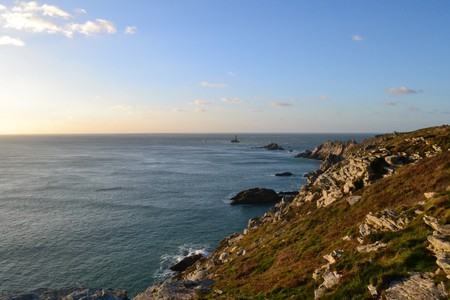 Be careful though, as the wind is sometimes very strong, and it can be dangerous to stand too close to the edge. 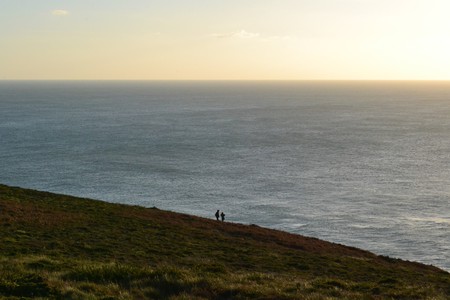 Most people come here during the day; therefore, in the evening, don’t expect to find the place too crowded. You can easily find yourself a spot on the rocks somewhere to enjoy the sunset quietly.

How do you to get to this beautiful place? There are buses that leave Quimper every day; they are less frequent during the winter, but during high season, you will not have a problem getting there. TCT’s best recommendation: walk or bike. Pointe du Raz is at the end of the E5 European Path, starting in Verona, Italy, so you are in for a long and beautiful trip. Signs are everywhere, and the route can at times be much more interesting than the final destination itself!

For more details on how to get there and more, check out the official website of Pointe du Raz here. 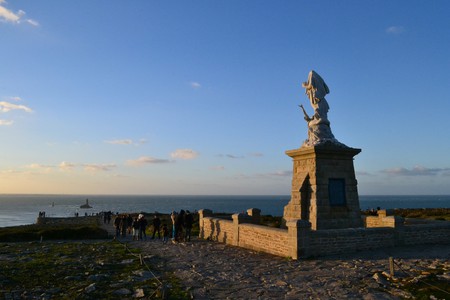 The statue of Notre Dame de Naufrages (Virgin Mary of the Shipwrecks) keeps an eye out for the sailors passing by, and it is also the reason why many photos are taken there. It is also perfectly aligned with the lighthouse of La Vieille and Ar Men. 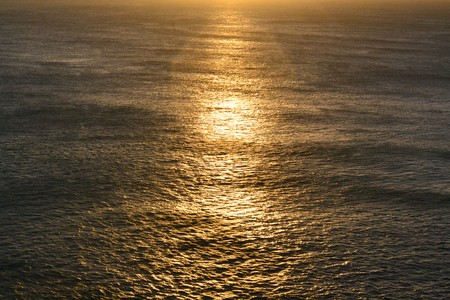 Don’t be fooled by how calm the sea looks in the above photo: waves can be huge here, reaching up to ten meters, and it is better to not go near the Pointe du Raz when storms are expected. 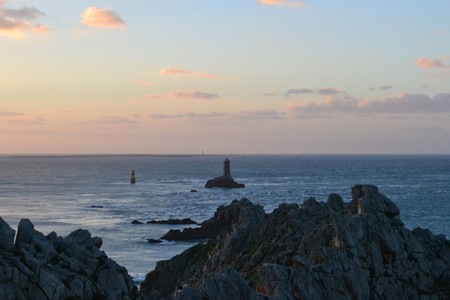 View on the lighthouses of Brittany, France | © Hristos Fleturis

As time passes by and the more you wait, the better the view becomes. 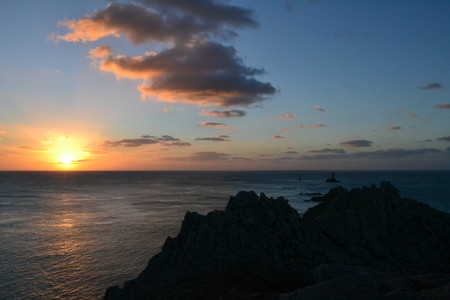 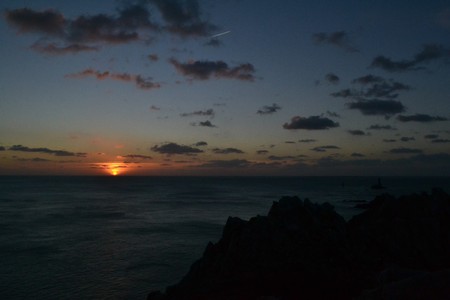 Minutes away from the sunset at Pointe du Raz, Brittany, France | © Hristos Fleturis

The name of the westernmost department of France, Finistère, truly makes sense once you are there and you see for yourself the vastness of the ocean and the absence of land. Finistère literally means ‘End of the World,’ and it literally feels as such.

Not to be mistaken with the Spanish Finisterre, which is much farther south. 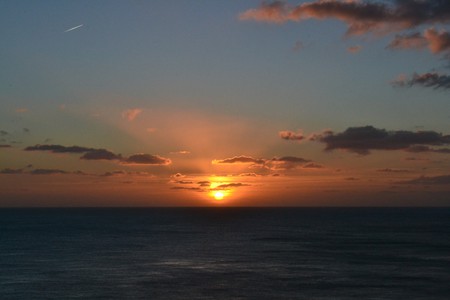 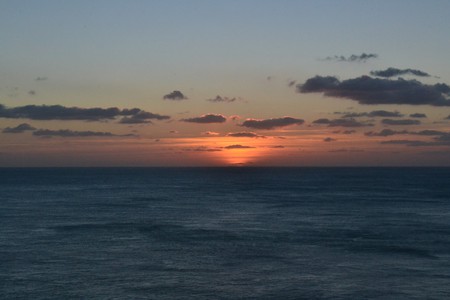 Colors of the sea in Brittany | © Hristos Fleturis

Wait a bit longer because a few minutes after the sunset, the colors are even more alluring, and you can appreciate the lighthouses even better. 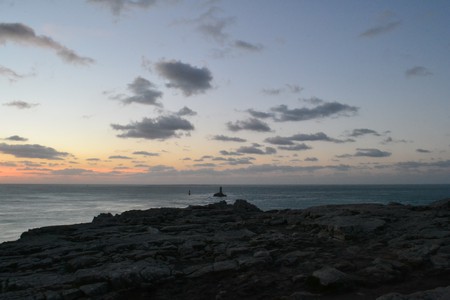 Lighthouses in the sunset | © Hristos Fleturis

Some people bare the wind and cold to see the sunsets here. Most of them, however, venture out on the rocks for the best photos. 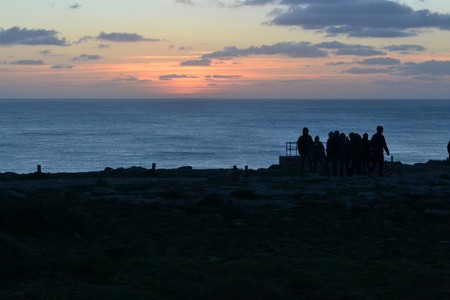 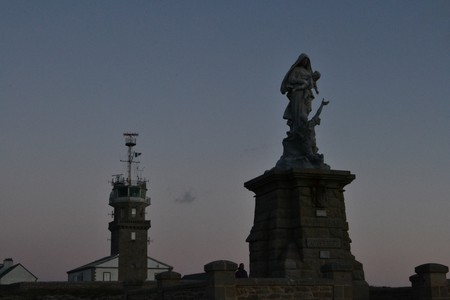 The newer lighthouse on land and the statue are definitely worth taking a photo of during the sunsets. The command center there is very important for the ships passing by. It’s also fascinating to see the contrast between the older lighthouses out on the sea and this newer one with the statue separating the land and the sea. 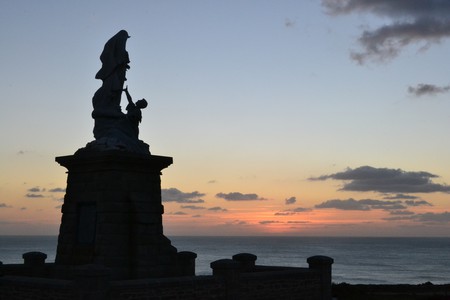 At the end of the day, the landscape is completely different. You have to like the saying of the Pointe du Raz website and of the department: Tout commence en Finistère. In other words: Everything begins in Finistére – at the end of the world. Good memories of great sunsets for sure start here. 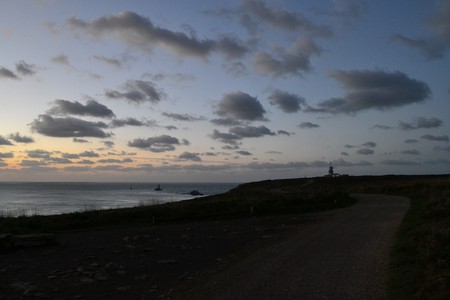