France’s Stunning Sculpture Parks and Gardens You Should Visit 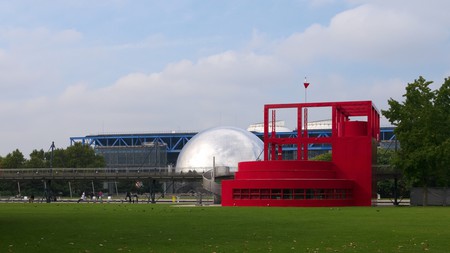 France is home to countless museums, art galleries, and exhibition spaces – but it also boasts some of the most beautiful sculptures and installations in the world, dotted in various parks and open spaces across the country. We take a cultural tour de France and explore nine of the best sculpture parks and gardens in France, from Paris to Provence, and from Haute Savoie to Brittany. 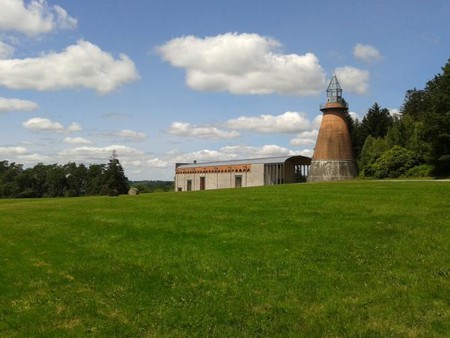 Image Courtesy of The International Centre of Art and Landscape

The next étape heads down to Provence where the Fondation Maeght in Saint-Paul-de-Vence showcases modern art in all its forms. Works by the giants of modern art including Miro, Chagall, and Tal Coat are all an integral part of the foundation, whose beautiful architecture is signed by Luis Sert. The sculpture garden is home to the Miro Labyrinth, featuring a large collection of the artist’s ceramics as well as bronze and marble sculptures, and to Takis’ wind turbines and Belgian artist’s Pol Bury’s fountain. 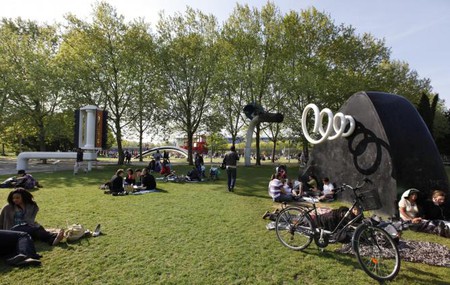 The natural way to begin a Tour de France is with a bicycle, and that is just how this sculpture tour begins in the city of Paris’s vast urban project Le Parc de la Villette. The park is home to a giant size sculpture of a bicycle buried in the ground, the brainchild of Claes Oldenburg and Coosje Van Bruggen, known for their large-scale projects based on everyday objects. When commissioned to create a sculpture for the Villette they got their source of inspiration from the importance of cycling in France and, more poetically, one of Samuel Beckett’s characters, Molloy who after falling from his bicycle suffered a loss of memory and could not give a name to the offending object. The Bicyclette Ensevelie shares a play area with Parisian children who have fun sliding down the front wheel emerging from the ground and clambering on the half saddle. 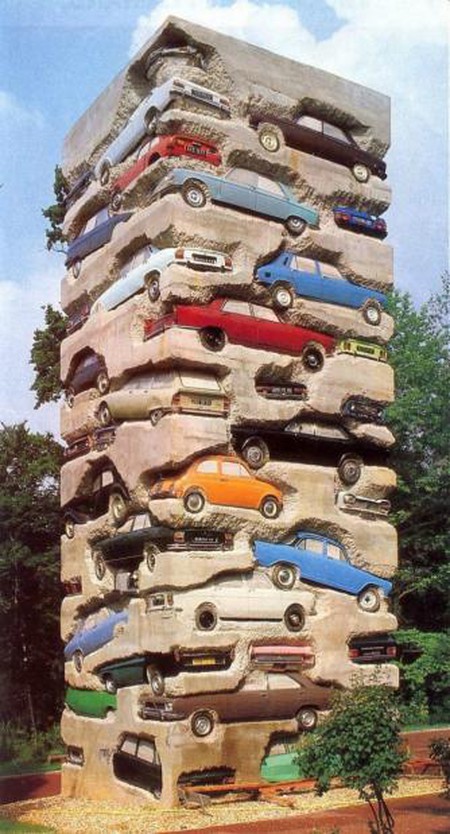 The first étape at the Château de Montcel, situated close to Versailles, does not offer a more functional form of transport than the buried bicycle. The grounds of the Château feature a 60-foot-high sculpture consisting of some 60 real cars embedded in concrete, the work of the famous French-born American Nouveau Realist artist Arman. Installed in 1982 and entitled ‘Long-term Parking’, the sculpture symbolises waste generated by mass production, heralding the awareness of environmental issues.

Leaving environmental issues behind, the tour continues to Franche Comté and the natural sculptures of Polish-born Morice Lipsi (né Lipszyc) carved out of lava stone. The vast grounds of the Morice Lipsi Museum in Rosey near the Swiss border, where Lipsi spent much of his later life, takes its visitors on a journey of the sculptor’s career. Lipsi’s style evolves from realistic representations in wood, bronze or stone to his later abstract sculptures in Brittany granite or Volvic lava using his preferred direct carving technique. Although both carved in stone, his 1935 ‘Venus’ is a direct contrast to his 1980 ‘Lumière à travers le Volume’. Morice Lipsi is known for his monumental sculptures including his post-war ‘La Cabbalistique’, which, dedicated to Israel, was erected in Tel Aviv after his death in 1989.

Skirting the Swiss border, the next part of the tour leads to the Chartreuse de Mélan in the mountainous region of the Haute Savoie. Chartreuse de Mélan is a chateau-cum-art centre, which invites contemporary artists to create installations that link the past with the present and that are in harmony with the landscape and architecture of the domain. Following these criteria, the many sculptures include ‘Mes’anges’ by Régine Raphoz, a memorial to the eighteen children who died in the 1967 fire that ravaged the domain. The installation consists of 18 bronze stems, each with a bronze blue tit at the tip and erected on a bed of wild grass where real birds come to feed. Another eye-catching installation is ‘La Girouette’, a seven-metre-high mobile stainless steel installation by René Broissand, which stands out perfectly against the mountain backdrop of the Giffre valley with its mobile discs rotating with the wind and reflecting the changing light. 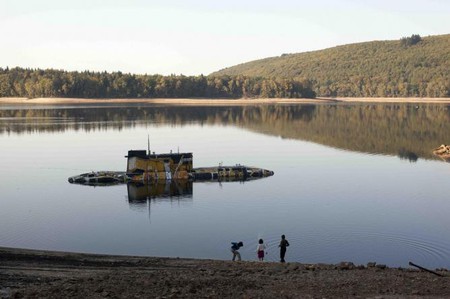 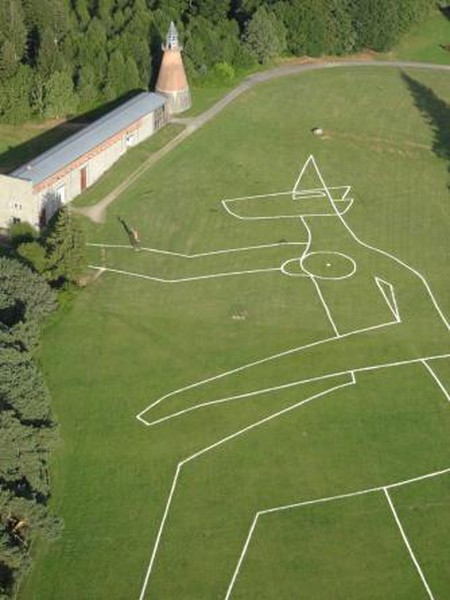 International Centre of Art and Landscape

The next part of the tour requires crossing a lake via a bridge to reach the island of Vassivière in the Limousine region, where the International Centre of Art and Landscape allows French and international artists to turn their wildest and most innovative ideas into tangible works of art. The whole island is dedicated to art and the only buildings are architectural wonders including a lighthouse designed by Aldo Rossi and Xavier Fabre and a chateau signed by Berger & Berger, which accommodates the artists in residence. The many sculptures dispersed over the island are either temporary or permanent exhibits. Some examples of the permanent works include German-born Hans Walter Müller’s Three Inflatable Modules, a series of PVC structures evoking the nomadic way of life, which are hidden in different corners of the woods or ‘The Toilet on the Mountain’ by Russian artists Ilya and Emilia Kabakov, an installation whose absence of doors open out onto the panorama of the lake. The grassland was used to exhibit Hungarian-born Yona Friedman’s ‘Balkis’, a land sculpture using buckwheat to depict a giant sketch of the artist’s dog and one of the major works of Russian artist Alexander Ponomarev, ‘SubTiziano’, is anchored in the lake. 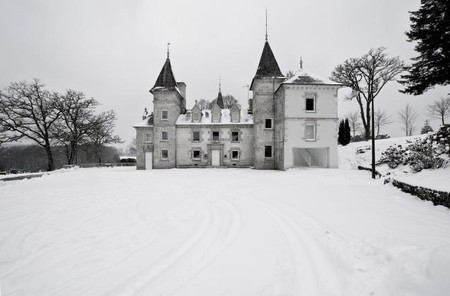 Notus Loci, 2008-2012, Image Courtesy of The International Centre of Art and Landscape | Photography by Thomas Raynaud

Our penultimate deviation takes us to the Forest of Milly outside the capital to wonder at the immense work of Jean Tinguly: ‘Le Cyclop’. The monumental 74-feet-high sculpture featuring a head, a single eye and a giant tongue serving as a toboggan, is made of 350 tonnes of steel and took over 20 years to reach completion. Swiss-born Jean Tinguely started building his bodiless head in the forest of Milly in 1969, calling upon a community of contemporary artists including his partner Niki de Saint Phalle and well-known names in French sculpture such as Arman and César, to contribute to the his creation. It was only after his death that Niki de Phalle brought the final touches to the work and it was finally inaugurated in 1996 by the then French president François Mitterand. Visitors can walk through the head’s labyrinth of various contemporary works including sound sculptures and a mechanical theatre. 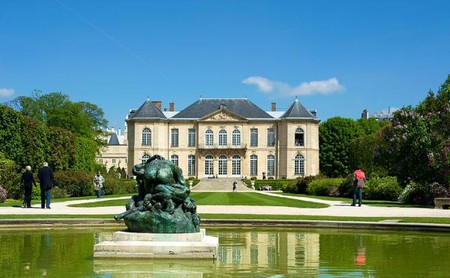 And so back to Paris where the tour could go and on with more works by Jean Tinguely such as the Stravinsky Fountain facing the Centre Pompidou, the Takis installation in the business area of La Défense, or Arman’s clocks on the esplanade of the Gare Saint Lazare. But art is cyclical and just as the Tour de France carves out a different route every year, so will more artists leave their mark in improbable places around the hexagon of France creating new étapes of the future. We end the tour in the Rodin museum where philosophical questioning can be left to the famous Le Penseur.

Heading north to Brittany and the Morbhian, the next part of the tour leads to one of the biggest sculpture parks in Europe, the Domaine de Kerguéhennec. This 18th-century chateau became a cultural centre in 1986 when it commissioned 20 major thought-provoking works from well-known contemporary artists. Visitors can see one of the British artist Richard Long’s stone circles, a rarity given that Long is apt to creating similar installations in inaccessible places across the planet that can only be viewed through photography. His ‘Un Cercle en Bretagne’ installation uses stones from the Yvoir Quarries in Saint-Just, Belgium. Another installation, ‘Step to Entropy’ by the American artist Richard Artschwager, consisting of a monumental armchair, a temple and a path leading to an undetermined destination, all representing an organised world juxtaposed with the chaos of society, invites visitors to release the energy in the stone by physically exploring the three elements. For further reflection, Jean-Pierre Raynaud’s 1000 painted flowerpots filled with concrete evoke the life-death question.