Typically recognised as a rival of Picasso, a Fauvist French oil painter and draughtsman, Henri Matisse began to ‘paint with scissors’ in the later stages of his career. His vibrant paper cut-outs, currently on display at the Tate Modern, conveyed an energy and sense of artistic invention that defines Matisse to this day. We take a look at the lesser-known side of Matisse’s work and explore his colourful, spectacular cut-and-paste oeuvre. 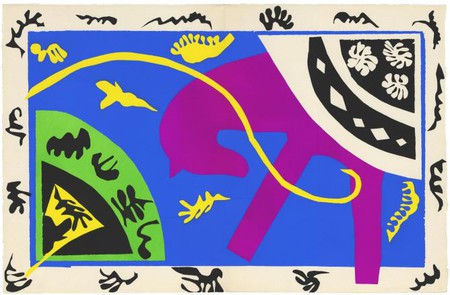 ‘Flirted too long with these enchanted colours’ are the words that resonate through the audio guide and the text of Tate Modern’s current Henri Matisse: The Cut-Outs exhibition, running until 7 September. Written by Matisse himself in a letter to a friend, this proud and poetic comment arises out of a period in his late years during which he suffered partial blindness. The official diagnosis? Too much intensity of looking and seeing colours.

Many have heard of the afflictions of other artists, of Van Gogh’s ears, or rather the loss of one, of John Milton’s infamous macular degeneration and Antoni Gaudí’s tragic and premature death after walking into the path of a tram. Matisse’s many illnesses, personal crises and nebulous vision in his third age are little documented. So too are the cut-outs, the paper images and the coloured shapes that came to fill the years during which he identified as an invalid, but also beyond this state, into full health.

In this landmark exhibition, curator Nicholas Cullinan of the Metropolitan Museum of Modern Art has collected these splendid pieces of Matisse’s work that are rarely enjoyed as a collection, in spite of contemporary critics and colleagues who frequently claimed that the iconic oil painter’s transition to cut and paste was merely the delusional activities of a man entering his second childhood. The cut-outs are rarely exhibited today – not for their perceived immaturity – but because of the inherent fragility and beauty of the work. 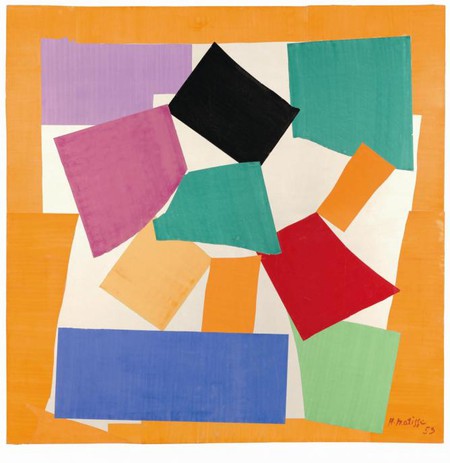 Henri-Émile-Benoît Matisse (1869-1954) was undoubtedly a pioneering colourist, and a figure guiding modern art. His long love affair with still life, oil paintings and the living, breathing hues of his world in the country and people of Southern France is celebrated worldwide in modernist and modern art shows alike. The cut-out exhibition brings the typical celebratory colour and richness of these paintings to life. Highly compelling, and self-consciously three dimensional, the Tate has gathered nearly 130 works, including banners, collages, maquette, murals and oil paintings.

Indeed, it has been near forty years since such a collection has been brought together, and it seems fitting that half a century following the artist’s death, such a visceral show acts as a commemoration as well as a looking forward, prompting us to reconsider our notions of form, genius and light. His formative years were dominated by developing his style as draughtsman, progressing into painting, printmaking and sculpting.

It is noteworthy that it is from dismal circumstances that Matisse took to scissors in 1941 following surgery for a colostomy, which left him dependent on a wheelchair for sweeping movements, but with little physical strength. Large and small, long bladed, curved, from his insomniac wakefulness, Matisse started to cut. To cut into coloured paper, in the dead of night to cover watermarks and stains on his bedroom wall. Each dawn would arrive, and a new paper creature or shape would have been added to the mural menagerie. From these simple beginnings, in a state of exhaustion, illness and amidst the terror of Allied shells sinking into his garden, came what was to become a prolific and frenetic production of work quite unlike that which Matisse – or indeed, anyone – had ever made, or seen, before. 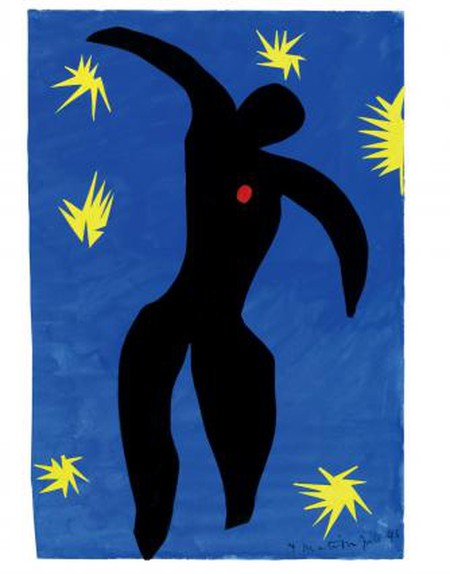 When later asked how he managed to crystallise his thoughts and movements in this way, he said is was ‘self-defence’. Soon Matisse had gathered a team of assistants around him, who mixed colours to his specification and painted plain paper. He then began to cut into colour, thereby corrupting the traditional boundaries of form and ideas of process, before positioning these gouaches découpés on the walls of his studio, making tweaks and rearrangements. Reports from this time suggest that Matisse was fuelled by a race against the dark oppression of death, and although such vitality and frenetic artistic production left one assistant unable to continue due to fatigue, the French artist out-lived medical estimations by over half a decade.

One of the most striking and joyful rooms in the exhibition hangs many of his collages together, with the hope of re-creating the space and condensed focus in which Matisse worked, with the walls literally layered with cut-outs. With the exception of a couple of sculptures of the female nude, the rest of the exhibition moves into the bigger, more confident decoupage works. From the introductory sketches on tracing paper, and the twinning of a cut-out still life with its oil painting inspiration (Still Life with Shell, 1940) one moves into rooms featuring the deconstructed pages of Jazz, Matisse’s book, with the introduction of paper typography as well as human forms. Next, the starry spikes of the night sky behind his infamous Icarus (1943) takes a dark turn with the connotations of the bleeding heart and the stars as the bombs and distress at the chaos of the Second World War.

Through another arch, a film and grayscale photographs capture the man at work, slicing into scrolling ferns, curving limbs, and creatures inspired by his holiday to Tahiti many years earlier. Two arched paper windows face us next; the maquettes representing the glass windows, ceramic panels and rich apparel in his designs for the Chapel of the Rosary of Vence upon which Matisse embarked in 1946. The scale and refinement develops with each move as the exhibition tracks his chronological development. Most peaceful and still of all is the series of blue nudes, which marks his desire to reposition the human form at the heart of his ‘painting with scissors’. 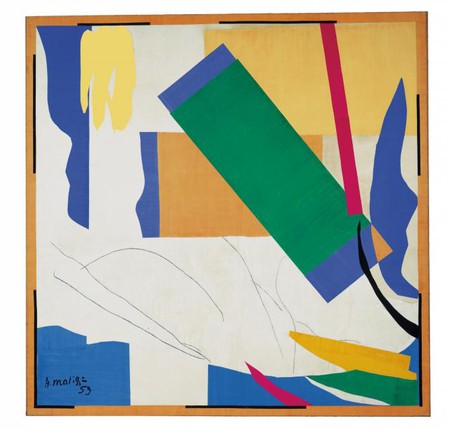 Rarely seen together, these four silhouettes embrace the contours of the female form, with the sensitivity and vision only enjoyed by an artist well grounded in paint and pencil sketches of anatomy. An extra curling lip of the paper’s edge, or wider negative space between the thighs differentiates the one from the other, but the distinctive ‘blue’ ties them together in a manner that is at once recognisable and calming. His early Fauvist influences reappear throughout his cut works, most notably in the seaweed fronds of The Sheaf (1953) and in naming the iconic The Snail (1953), which was originally envisaged to be part of one enormous creation, with Large Decoration with Mask (1953) and Memory of Oceania (1952-early 1953). However, the scope of the piece as a stand-alone artwork is remarkable. The complexity of life is pushed further towards the simple distillation into simple symbols – a purity Matisse sought throughout his late work. He described the overlapping spiral of coloured shapes in this work as ‘abstraction rooted in reality’.

The close of the show sees a return to the creative energies connecting stained glass to the cut-out work creations. Nuit de Noel, created in the late summer of 1952, is a gloriously luminous instance of his decorative window work, with the maquette displayed alongside the final commissioned piece. Through an offering of out of hour conversations and talks held on Matisse at the Tate throughout the course of the exhibition, we are able to celebrate in the master’s own premonition that: ‘by creating these coloured paper cut-outs, it seems to me that I am happily anticipating things to come. […] I know that it will only be much later that people will realise to what extent the work I am doing today is in step with the future’.

Henri Matisse: The Cut-Outs is on show at the Tate Modern in London until 7 September.