Demna Gvasalia Balenciaga's £1,700 Version of The Ikea Bag is Genius 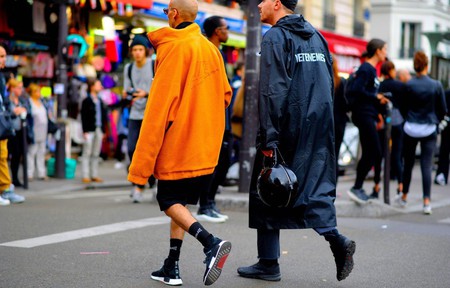 Balenciaga’s latest bag looks very similar to a 40p (US$0.50) version by Ikea, and that is no bad thing.

Demna Gvasalia, Balenciaga’s creative director, has built his brand on taking everyday items and giving them a luxury twist. At his label Vetements, the designer focused on such things as the humble DHL t-shirt, Levis, Juicy Couture tracksuits and the basic raincoat. All pieces that one could originally find at affordable prices, and all consequently released with extraordinary price tags at Vetements (the DHL t-shirt sold out at £185 (US$237) and Vetements Levis are currently on sale for over £1,000 (US$1,280)). This April, the maverick designer has turned his attention to the humble Ikea bag with his latest collection for Balenciaga.

The brand, which was previously led by Alexander Wang, has been transformed by Demna Gvasalia. Having graduated from the Royal Academy of Fine Arts Antwerp in Belgium, Gvasalia trained at Maison Margiela before launching his own, avant-garde brand. Yet in spite of the cult success of Vetements, his appointment to Balenciaga was greeted with surprise by many in the industry. Could this underground figure make it at a mainstream luxury house? It’s a scenario not so different to the reaction that Margiela received when he was hired as Creative Director at Hermès back in the 1990s.

Gvasalia’s latest release has raised more than a few eyebrows: Balenciaga’s Ikea-esque bag sells at a cool £1,700 (US$2,180) rather than 40p (US$0.50). The similarities have also prompted Ikea to release their own response to the news. In a genius marketing move, the Swedish brand’s latest advert is designed to help shoppers identify the real deal.

Beyond Ikea’s smart response, the release – and the consequent outrage – is testament to Demna Gvasalia’s understanding of the digital landscape, and his ability to manipulate the social media generation for the brand’s benefit. Creating ‘cult’ items that alienate a lot of people not only gives dedicated ‘fashionistas’ a fresh cult of exclusivity to buy into, but also imbues a mainstream luxury house with edginess in a way that the clothes can’t do. In a similar vein, Gucci has embarked on smart digital strategy, working with the likes of Buzzfeed for the first time to reach new ‘millennial’ audiences.

‘I love social uniforms – what the message means for somebody. I used to wear security t-shirts and people would think I am a security guy. It’s the connotation of clothes. Without people knowing you, it brings a message. I think it comes from the lack of diversity in a period of my youth. Everybody dressed the same because there was no choice,’ the Georgian-born designer told Vogue‘s Suzy Menkes.

Unlike Gucci, Demna is inviting a DIY approach to luxury (also seen in the Vetements inspired trend of wearing your coat off your shoulders, like it slipped and you couldn’t be bothered to put it back on): you might not be able to get the premium version but you can still buy the cheap, original one and be in on the trend, and the joke. The crucial thing here is that in subverting the value of everyday items he’s inviting people to laugh at those who spend the money, and also feel envious. These items become metaphors, a means of being both the outsider and of belonging; a uniform for the masses and an escape that few could dream of. Call it a cult, or a gang or a farce: no one is doing what Demna is doing. And that, is genius.