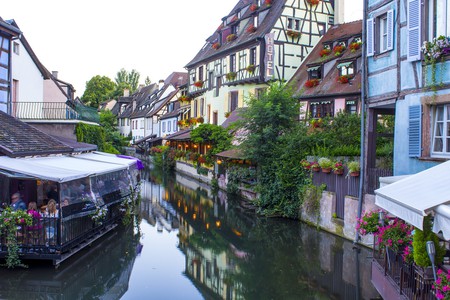 Colmar is a town in the Alsace region in northeastern France. The beautiful historic center – with its flower-edged canals, architectural delights and traditional buildings spared from the French Revolution and WW1 and WW2 – is a real life fairy tale town through and through.

La Petite Venise, ‘Little Venice,’ in Colmar is the area of the town crossed by canals of the river Lauch. The reflections on the water throughout the day are dreamy and it’s easy to see why it’s one of the most picturesque towns in France. 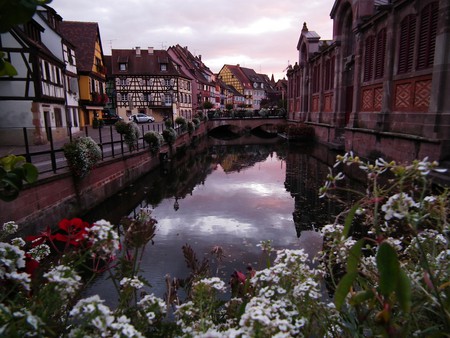 Scattered around the town are the prettiest shutters you’ll ever see. Some decorated, some with wooden cut-outs, they dress the streets and add to their charm. 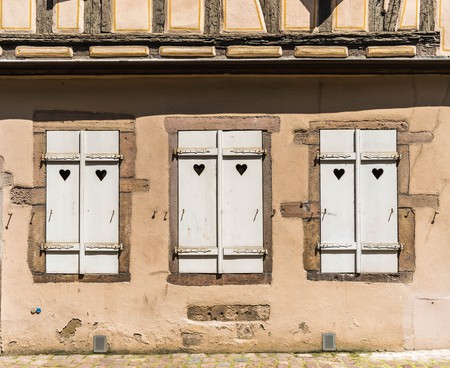 Pick up a pretzel from one of the town’s bakeries. With its proximity to Germany, you’ll be able to find regional delights, such as tarte flambée (an onion and crème fraîche tart), tarte aux poires (pear tart) and kugelhopf (a French-style Bundt cake). 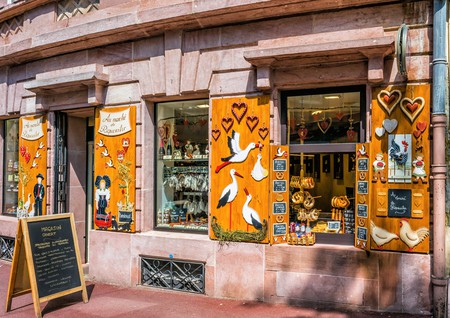 The Unterlinden Museum is one of the most visited in France and it’s housed in what used to be a convent, with cloister archways that bring magical places to mind. 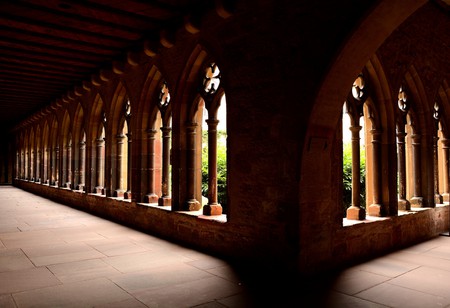 The façades are especially gorgeous in Colmar. Walk around as the sun is setting – the different colors of the buildings will only look more special. 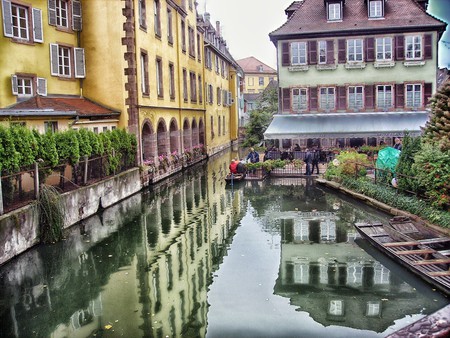 Maison Pfister is one of the finest houses in Colmar, and should definitely be on your walking route of the gorgeous old town. Built in 1537 for Ludwig Scherer, it gets its name from F. X. Pfister, who was the owner of the house from 1840-1892. 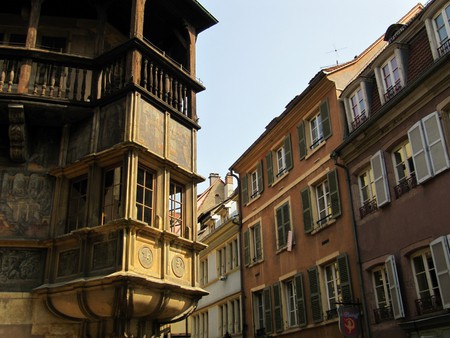 The windowsills are just as decorative as the shutters in Colmar, so keep your camera at the ready. 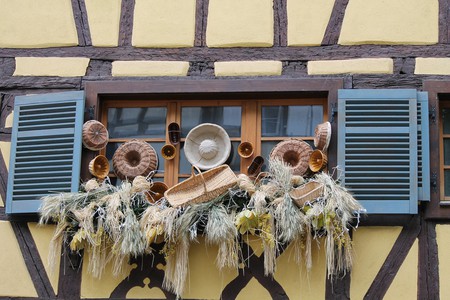 St Martin’s Church in Colmar is a Gothic-style church built in 1365. The church’s supporting pillars at the front are an unusual design point of interest. 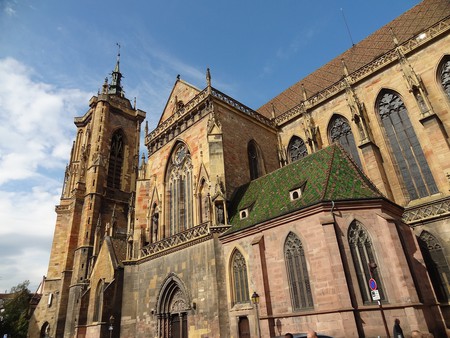 There is no shortage of pretty squares to pause and watch the world go by. Make sure to have a glass of Alsace wine; Colmar is situated on the Alsatian Wine Route. 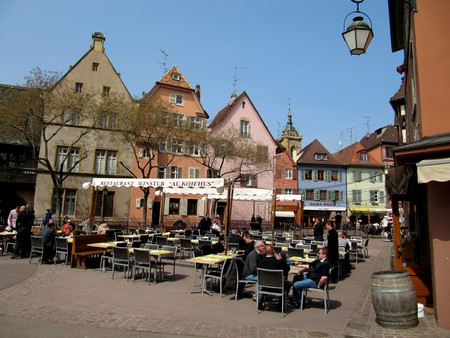 Colmar is just as beautiful by night as it is by day. Wander the canals in summertime, or find a cozy corner in the winter months looking out onto the scenic vista. 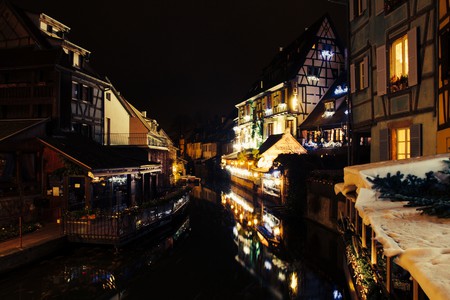 Christmastime in Colmar is an enchanting experience. The old town is draped in decorations and the smell of Christmas trees dances in the air. Colmar hosts five Christmas markets throughout the period. 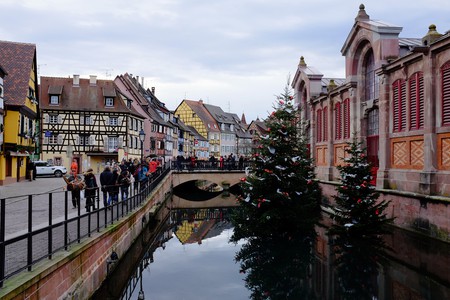 Colmar’s display of flower arrangements really adds to its charm. You’ll find them hanging and crawling and draped all over the old town. 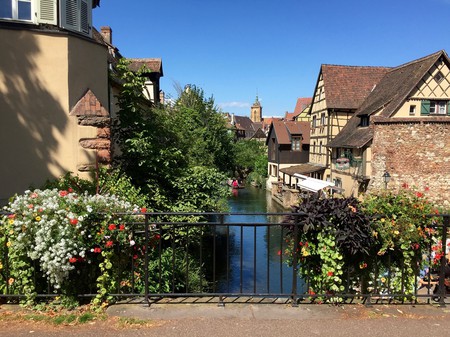 The various quaint sign posts hanging above shop fronts and eateries in Colmar look as if they’ve come straight out of a fairy tale… Don’t you think? 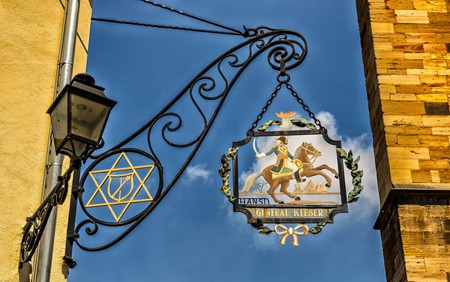 The preserved streets are filled with gorgeous terraced houses. Make sure to stop by the exterior of Maison des Têtes too, as it is a sight to behold. 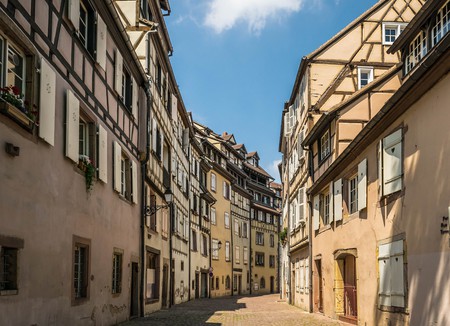 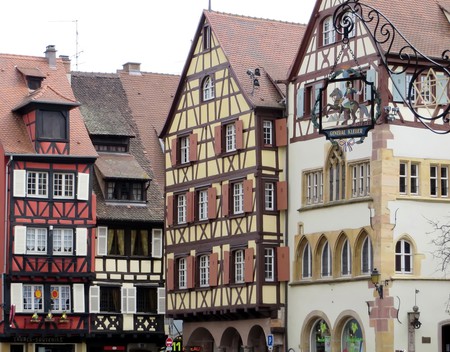