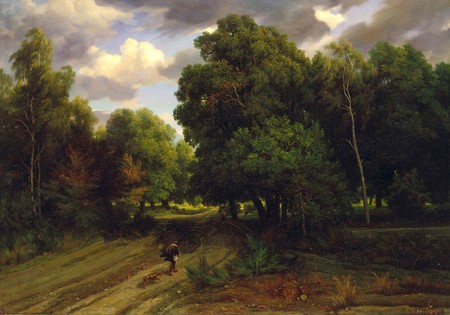 Charles Francois Daubigny, 'The Crossroads of the Eagle's Nest, Fontainebleau Forest', 1843-44, oil on canvas | Courtesy The Minneapolis Institute of Arts, Gift of Ruth and Bruce Dayton

Daubigny, Monet, Van Gogh: Impressions of Landscape rethinks the history of French Impressionism and the way it’s viewed today. The exhibition gives credit to Charles François Daubigny (1817-1878), who was a mentor to Claude Monet (1840-1926) and Camille Pissarro (1830-1903) and a major inspiration to Vincent Van Gogh (1853-1890). In fact, Daubigny is often considered the true father of French Impressionism.

Daubigny has never been the primary subject of a major international exhibition until now, and no exhibition has ever examined his profound influence upon the Impressionists and, in turn, their influence on his late style. Popular in his day, his works were later overshadowed by the works of those he mentored and inspired, who often painted in more vivid colors.

The Taft Museum of Art is the exclusive North American venue of this exhibition. After opening at the Taft from February 20th through May 29th, 2016, the exhibition traveled to the Scottish National Gallery in Edinburgh from June 25th October 2nd, 2016, culminating at the Van Gogh Museum in Amsterdam from October 21st, 2016 through January 29th, 2017. 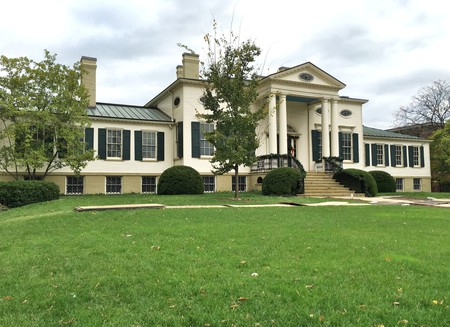 This groundbreaking international exhibition challenges the origins of Impressionism by reconsidering Daubigny as a central figure in the development of 19th-century French landscape painting.

Born in Paris into a family of artists, Daubigny was first taught by his father, the artist Edme François Daubigny. His uncle Pierre Daubigny, a miniaturist, was also influential in his life. Daubigny carried on the tradition by teaching his son Karl to paint. Karl Daubigny (1846-1886) was an accomplished landscape painter in his own right who died at the height of his career. 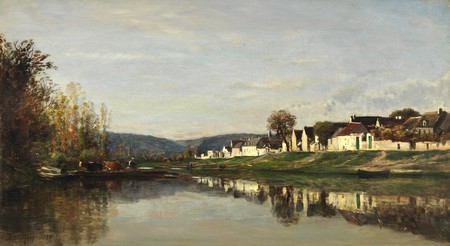 Daubigny studied Dutch landscapes at the Louvre and trained with painters at the French Academy. Initially he painted in a traditional style, sketching outdoors and then painting from his sketches indoors. This changed after 1843, when he settled in Barbizon to work outside in nature. Daubigny routinely painted outdoors, directly capturing qualities of light and atmosphere. He launched a floating studio boat he called Botin (The Box), set along the Seine and Oise rivers near Auvers, that fundamentally changed the way artists could frame their compositions. He employed radical painting techniques for his time, exhibiting sketch-like works that critics assailed as ‘mere impressions’ that were not yet finished.

In 1854 Daubigny visited the Normandy coast. His desire to portray the dramatic coastal atmosphere influenced his decision to paint outdoors on the beach using uncommonly wide canvases.

In 1866 Daubigny visited England, eventually returning because of the Franco-Prussian war in 1870. In London he met Claude Monet, and they joined together to leave London for the Netherlands. During this time, Daubigny and Monet painted Dutch landscapes — Monet even began painting from a boat, mimicking Daubigny’s style. 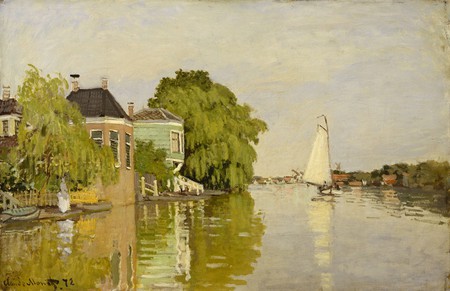 Monet, Claude (1840-1926): Landscape at Zaandam, 1871. New York, Metropolitan Museum of Art*** Permission for usage must be provided in writing from Scala.

In 1865, Camille Pissarro painted a landscape reminiscent of a Daubigny painting. Pissarro was the only impressionist to show his work at all eight Paris Impressionist exhibits from 1874-1886. In 1866, Daubigny served on the jury that admitted paintings to the Paris Salon and defended Pissarro’s work. Pissarro’s painting, Orchards in Bloom, Louveciennes (1872), is part of this exhibit.

Daubigny never met Vincent Van Gogh, but Van Gogh became familiar with Daubigny around 1875, when he worked for an art dealer in London who bought and sold Daubigny’s works. Daubigny and Van Gogh both loved painting the countryside. In 1890 Van Gogh moved to Auvers for medical treatment, and he often painted the same landscapes Daubigny had painted years earlier. When he realized Daubigny’s widow Sophie still lived in Auvers, he visited her and received permission to paint in the garden. Van Gogh’s painting Daubigny’s Garden, which is part of the exhibit, features a woman in a black dress believed to be Daubigny’s widow. 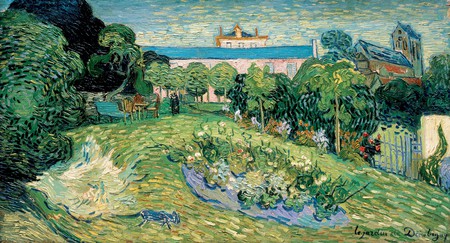 Of the 55 paintings in the exhibition, approximately 40 are masterpieces by Daubigny which display a full range of the artist’s achievements over four decades. The remainder of the works on view offer fascinating and often surprising comparisons with Impressionist and Post-Impressionist paintings by Claude Monet, Camille Pissarro, and Vincent Van Gogh.

The comparisons reveal Daubigny’s impact on two subsequent generations of artists — the Impressionists Monet and Pissarro and the Post-Impressionist Van Gogh.

In addition to one of the Taft’s Daubigny paintings, which prompted the exhibition, Daubigny, Monet, Van Gogh: Impressions of Landscape also features spectacular loans from numerous North American and European museums as well as private collections. This exhibit is a truly rare opportunity where visitors can see all of these works shown together.