Beautiful Speedriding Under the Moonlight 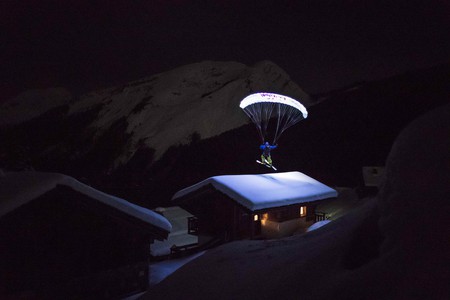 Valentin Delluc took his two great passions into the dark to produce a stunning film that sees him speedride his way down the Alps in the dead of night.

Moonline is a short film that born out of an idea in the summer of 2016. Delluc wanted to combine his two loves – skiing and flying – under the moonlight. The film was shot in two locations in France, Chamonix near Mont Blanc, and a little further north in Avoriaz, near Geneva.

Delluc wanted to fly down the mountainside in the dark, when the slopes are peaceful and still. When not gliding through the air, he would be brushing the powdery slopes and the roofs of the chalets sprinkled across the course on the way down. While every other skier in France was tucked up in bed, resting their bodies for the next day’s snow, Delluc had an eerily beautiful mountain all to himself .

For the uninitiated, speedriding is a hybrid sport that combines paragliding with skiing. Riders use a small fabric wing and launch themselves close to steep slopes, whether that be mountains, glaciers, or anything that they can ski down when they get close to the ground. Whereas paragliding features longer, sustained flights, speedriding involves short bursts of high-speed flight, extremely close to slopes.

In order to navigate his way down the 1,500 vertical metres, his wing was strapped with LED lights. As a result, Delluc had to conduct test runs before the real deal because the use of the lights added enough additional weight to affect the wing’s aerodynamics and steering. When happy with the wing’s setup, Delluc could do the flight for real, and having a full moon – along with the LEDs – meant that he could fly as close to the ground as possible. 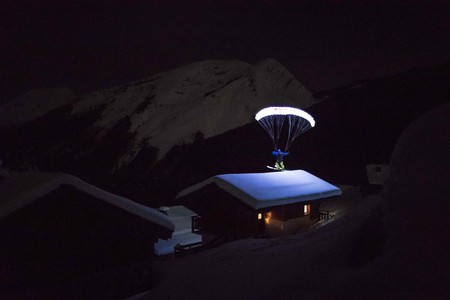 At 4am in the morning, the Frenchman took off from the Bosson Glacier’s peak. The approaching sunrise meant that the the flight had to filmed in one shot, with one cameraman on the ground and second one in the air, as well as a guide to help navigate. To get to the take-off point, the team had to get the last cable car of the day (12 hours before the start of the flight), before skiing to the 3,600 metre high Col du Midi.

Delluc has been skiing since he was a child and as a teenager moved into freeskiing. At 11 he made his maiden flight and after a childhood spent paragliding and freeskiing, the move into speedriding was a logical progression. Speedriding allows athletes to get to slopes that may have previously been inaccessible, and Delluc has built a reputation for the videos he shoots while performing his stunning feats. 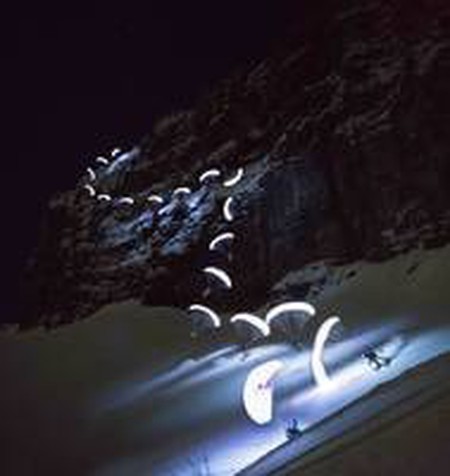