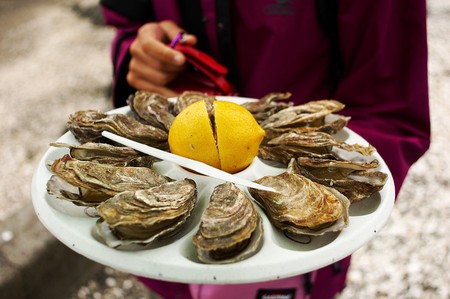 The fishing village of Cancale lies on the Emerald Coast in France’s Brittany region, across the bay from the Mont Saint-Michel. Cancale is known as Brittany’s oyster capital, a title earned thanks to the high-quality plankton that grows in the bay, feeding the oysters and aiding in their reproduction. If your mouth is watering at the thought of slurping these salty mollusks, read on for an oyster lover’s guide to Cancale, France.

A brief history of Cancale, France

The town of Cancale was first discovered in the 6th century AD by a wandering monk from Wales named Saint-Méen. A church that bears his name was built in the 18th century by Garangeau, a student of the renowned military architect Vauban, and is found in Cancale’s Old Town. Nowadays, the Church of Saint-Méen is home to the Musée des Arts et Traditions Populaires, a museum dedicated to the heritage and history of the maritime town.

Oyster harvesting began approximately 2000 years ago by the Romans during their invasion of France. Centuries later, fishermen discovered the seaside town and began to build their communities. Though oysters have always been a delicacy and sign of prestige in France (The Sun King, Louis XIV, often requested them at his table), the industry began to really flourish in the 1920s with the rise of trendy, beachside resorts. 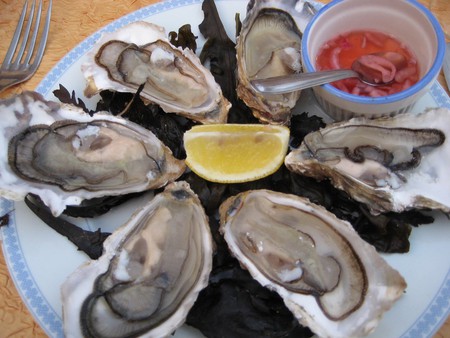 Types of oysters and production

France produces two types of oysters: the flat oyster (in French known as the huître plate), a variety native to the region, and the rounded oyster (in French, huître creuse), which is imported from Japan. Though the flat oyster, also known as Belon, originates here, most of the oysters harvested in Cancale are the rounded style, with the flat-shelled Belon making up approximately 2% of France’s overall production. Flat oyster populations have declined since the 1970s when they were hit with a parasite infection. Their saving grace was the import of Belon from the Breton town of Aubay that managed to avoid contamination. When the tide is low, square oyster beds where the mollusks are farmed are made visible in the wading shores. For a more in-depth look at the beginnings of oyster farming and production, visit the museum La Ferme Marine. This family-owned operation shows the farmers at work along with a presentation of their trade and an exhibition of shells from around the world. 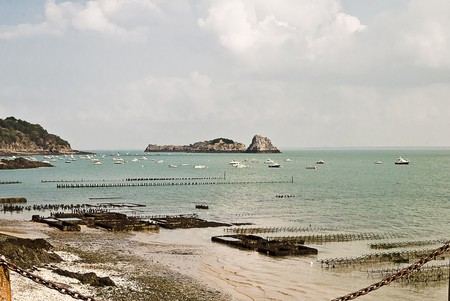 Oyster aficionados will find many options for tasting this King of shellfish on a visit to Cancale. The town’s port, La Houle, sees a wide selection of seafood restaurants lining its perimeter, from Michelin-starred to family-run establishments and to blatantly kitschy tourist traps. If you’re looking for a quality and informal dining experience, top picks include Le Surcouf or Au Pied d’Cheval (pied d’Cheval is also the term for oysters that are fished from the sea, rather than farmed). Better yet, order a fresh plate from a vendor stall on the beach. They come pre-shucked and served with a plastic knife and a simple wedge of lemon for as little as 5 EUR a dozen. Enjoy them as you gaze at the ocean and soak up the atmosphere represented in the oyster’s clean, simple and salty flavour. Those who want to try their hand at shucking and learn the skill of cooking with seafood can opt to take a class with the former three-star Michelin chef, Olivier Roellinger. 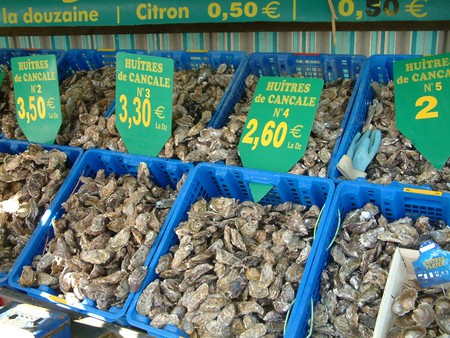 When to visit Cancale, France

While the old myth asserts that oysters should only be enjoyed during months that include the letter “r”, it is argued that Cancale oysters can be enjoyed year-round. The Brittany region, in general, is best enjoyed between March and October. July and August are the busiest months and in the opinion of some farmers, not ideal for oysters. During these months they prepare to spawn and emit a milky liquid. While still edible, some producers take them off the market. That being said, ostreaphiles should seek out spring and summer months to plan their oyster-gorging getaway.