An Introduction To Realist Art In 12 Works 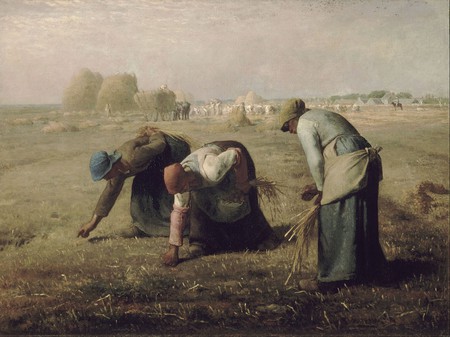 Realism came about in the mid-19th century as a response to the lofty concepts of Romanticism and paintings of historic events. Instead of religious figures and other grand subjects, Realism features ‘real’ scenes of the lives of ordinary people like laborers. Works of Realism still included plenty of detail, but they detail the more mundane, grittier aspects of life.

‘I was born as a peasant and shall die as a peasant,’ Millet once said. Although Millet became a successful painter during the Realism movement and lived quite a comfortable life, the years he spent growing up on a farm and doing hard labor with his hands had a huge influence on his life’s work. In this simple painting, a woman is baking bread. Her face is covered, and she is dressed in simple working clothes, meaning she could be any peasant woman. 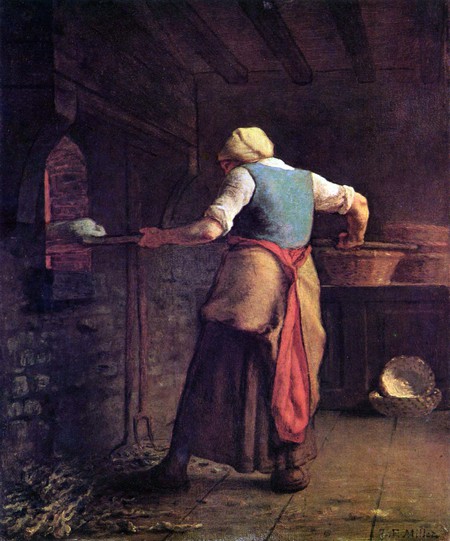 A Burial at Ornans by Gustave Courbet

Courbet captured a major turning point in French art in his 1849-50 work, A Burial at Ornans. Set in the small town of Ornans, Courbet’s birthplace, the painting presents the scene of Courbet’s great-uncle’s funeral. This ordinary man’s funeral is given the importance a historical painting would give a major religious event, and it is presented in stark realism. After its exhibition, Courbet gained instant fame.

“A Burial at Ornans” by Gustave Courbet | © Public Domain/WikiCommons

Daumier was a French printmaker, caricaturist, painter, and sculptor who offered commentary on social life in 19th-century France. Daumier had an extensive number and range of works, but he is best known for his caricatures of political figures. The Third Class Carriage is one of Daumier’s notable forays into Realism. He has a unique style, but the subject matter is the same: a simple scene of peasant life presented in dull, dismal colors. 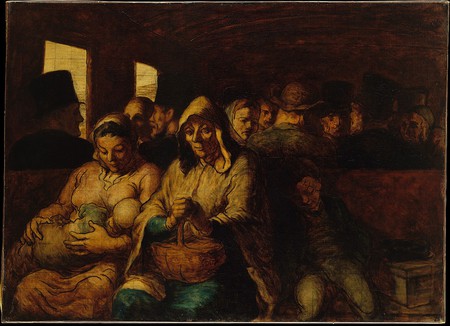 To glean means to gather gradually, little by little, and in farming terms, it means to gather grain or produce left by reapers. The women shown in this painting of Millet’s are working away against a typical farming scene. Their faces are obscured, hiding any defining features, as they bend over to collect the grain, casting shadows behind them.

This 1854 painting shows Courbet greeting Alfred Bruyas, who travels with his servant and dog, while walking to Montpellier. Critics mocked this painting when it was shown at an 1855 exhibition, sarcastically calling it ‘Bonjour, Monsieur Courbet,’ but the oil on canvas painting depicts many aspects of Realism while also offering insight into Courbet himself. This self-portrait shows how Courbet looked, or at least how he wished to be seen. He presents himself as distinctively different from the well-dressed Bruyas. In the painting, Courbet carries his easel and painting equipment, a model of self-sufficiency, while Bruyas, who is unsuitably dressed for the outdoors, is trailed by a servant carrying his belongings. 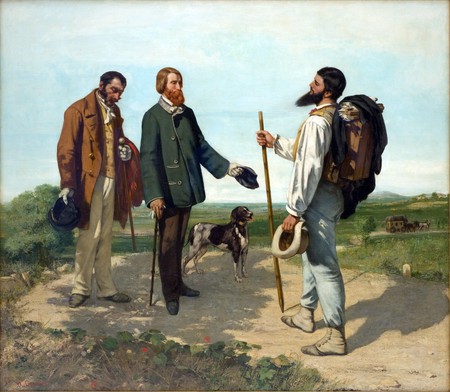 Breton was deeply influenced by the French countryside, and he excelled in presenting rural life in beautiful, idyllic scenes. He painted The End of the Working Day in 1886-7, which was part of a series of works exhibited showing peasant women against landscapes of a setting or rising sun – these paintings were very popular, especially in the United States. He was one of the most beloved and best-known pastoral painters of his era. 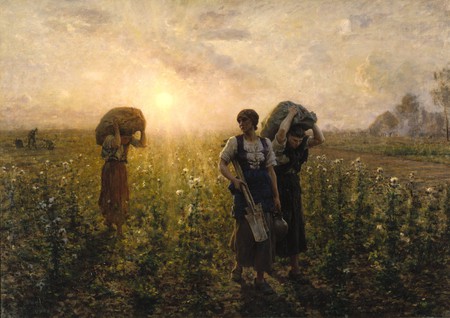 The Potato Harvest by Jean-François Millet

The Potato Harvest, which shows peasants toiling in the fields between Barbizon and Chailly, was one of nine works Millet created that gained international acclaim after their exhibition in 1867. The painting represents a struggle for survival, and the harshness of the painting’s subject translates through to the materials used – thick pigments and a coarse canvas. 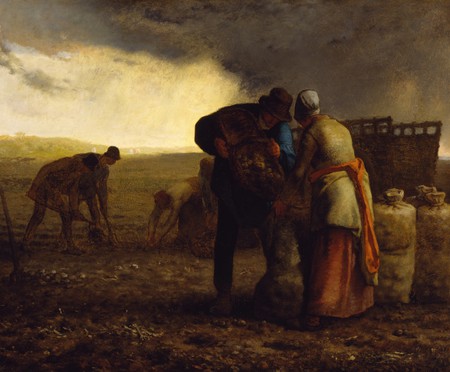 Barge Haulers on the Volga by Ilya Repin

This 1870-73 work shows the reach of the politics of Realism. Repin was a celebrated Russian artist who was sympathetic with peasant labor and made paintings that worked to promote social equality. In this painting, the dismal scene shows workers tied up like farm animals hauling a ship upstream.

“Barge Haulers on the Volga” by Ilya Repin | © Public Domain/WikiCommons

The Gross Clinic by Thomas Eakins

Alternately called The Clinic of Dr. Gross, this 1875 painting was created by American artist Thomas Eakins. In the painting, Dr. Gross is the figure standing and lecturing a group of medical students. Eakins’ work documents the history of medicine with adamant realism. This work can be contrasted with his later work The Agnew Clinic, which shows a brighter, cleaner environment for surgery with white coats and all. The straightforward, bloody scene was shocking to the public at the time. 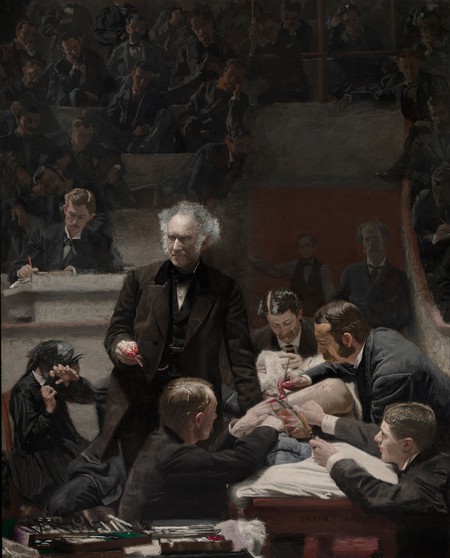 Song of the Lark by Jules Breton

Song of the Lark is one of Breton’s most famous works of art. Painted in warm and rustic colors, the work depicts a woman looking up, farm tool in hand, with the rising sun glowing behind her. The woman is standing still instead of toiling away, showing a small moment of peace and rest before a long day of work on the farm. The 1884 work had a more recent run-in with fame when Bill Murray said the painting saved his life. 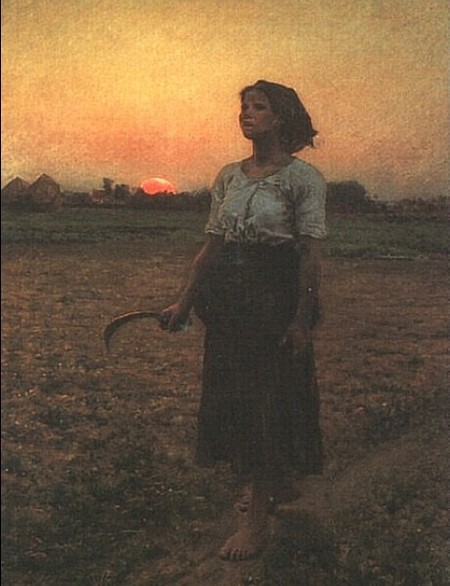 “Song of the Lark” by Jules Breton | © Public Domain/WikiCommons

The Stone Breakers by Gustave Courbet

Courbet’s 1849-50 work The Stone Breakers depicts a scene of the labor that built modern life, and it was hugely popular after its exhibition (the very same at which he showed A Burial at Ornans). The painting shows the daily life of two stone breakers, one of the most physically demanding but low paying jobs in France at the time. The laborers’ faces are obscured, a common technique in Realist art, and they wear ragged, simple clothing. 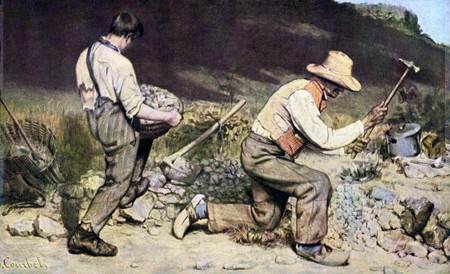 Corot was an artist that made the transition from Romanticism to Realism in the late 1800s, but he had a hard time letting go of traditional themes in his Realist works. Corot seemed intent on adding mythological figures to his paintings to skew his work back toward traditional Romantic works. One critic even said, ‘If M. Corot would kill, once and for all, the nymphs of his woods and replace them with peasants, I should like him beyond measure.’ Later in life, as in this 1873 painting, Corot stuck to depicting peasants in neutral-toned landscapes. 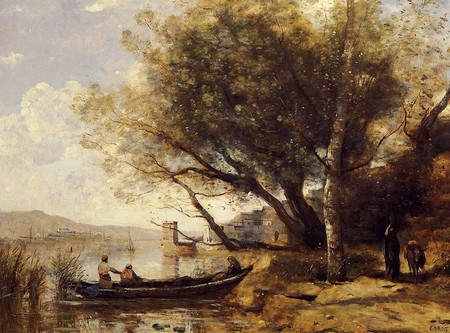