An Introduction to Bullfighting Season in Provence 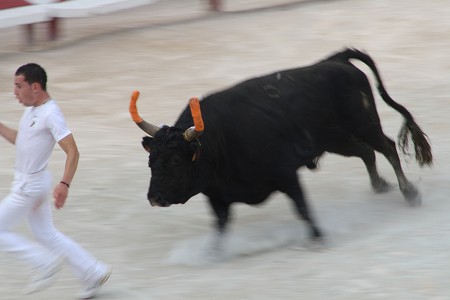 Bullfighting is a local tradition in the South of France that is taken seriously. A custom dating back to Roman times, people feel it connects them to the bulls and nature, and is still considered a prestigious occupation in some parts. From why it happens to where to find it, here’s our guide to bullfighting in Provence.

The different types of bullfighting

There are two types of bullfighting that take place in Provence. The first is the Spanish style, Corridas, and the second is the Course Camarguaise. The Corridas follows a strict, ritualistic pattern, where the bull enters the ring and is poked in the back with barbs by bullfighters running in the ring and on horseback. It is then the matador’s job to push the bull through a series of flamboyant movements before skewering it in the heart with a sword.

The Course Camarguaise does not end with the death of the bull. This type of bullfighting is from the Camargue region of France (southwest of Provence) and involves men, called raseteurs, trying to pull ribbons off the bull’s horns. Unlike Spanish bullfights, the men are rarely injured and the bull is never killed. Six bulls are normally used in each show, with the most agile and prized bulls going last. The bull is tired out during lots of chases, where the raseteurs jump over barriers to escape the charging animal. At the end of each act, music from the opera Carmen is played. Awards are given to the best bulls, raseteurs, and bull farms. The bulls are led in and out of the arena and the best raseteur is allowed a kiss from the girl who has been crowned Queen of Arles for the day.

What are the origins of bullfighting?

Bulls have long been worshiped in the Mediterranean region. Its origins date back to Roman times, when bulls were used in sacrifices to the gods, as well as in gladiatorial combat. It was widely adopted in France in the 19th century, when people would compete for royal favor through combat with the bulls. Today, it is seen as a cultural custom that links local people to the land and the power of the bulls.

Bulls are used in most festivals in some way or other in the Camargue, and are very respected. In Spanish bullfights, the matador is king and is always the star of the show. In the Camargue it is the other way around, and the bull is the most respected star. Training to become a raseteur starts in the early teens and is a prestigious job in small towns. The French government has tried to ban bullfighting in the past, but faced so much local opposition in the south of the country that it backed down. Bullfighting is taken seriously and both kinds have special protection. In some places, cows are used instead of bulls.

Daily life for the bulls

The bulls used in the Course Camarguaise are bred especially for the purpose and kept in herds. Each fight lasts an average of 15 minutes, and then the bull returns to his herd, and might not be used again for a few weeks. The ‘star’ bulls might fight about half a dozen times each year. They usually retire at age 14 or 15, when they are left out to pasture until they die. They are buried upright with their head facing the sea.

Where to see a bullfight in Provence

You can see both kinds of bullfighting in the beautiful, historic town of Arles. The season begins in late April and then runs through July, August and September. The biggest Course Camarguaise is called the Cocarde d’Argent and is held in July. Much of the town turns out in the central amphitheater to watch the festivities.

You can also watch bullfighting in Nimes and in towns throughout the Camargue region of France. The amphitheater in Nimes is much more well-preserved than the one in Arles, and you can buy tickets for Nimes here, and for Arles here.