An Essential Guide to France's Beautiful Island of Porquerolles 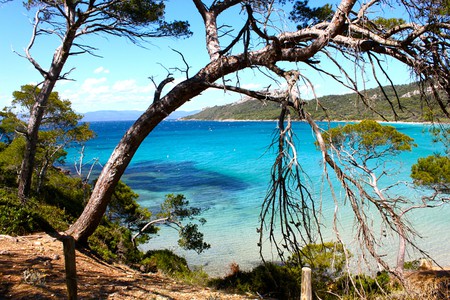 Take a trip to the beautiful island of Porquerolles, "Notre Dame" | © Alexis D/Flickr

Porquerolles, an island in the Mediterranean sea, is located just off the coast of France, near Hyères. Here are ways to make the most of a trip to this beautiful island including when to go and what to pack.

There are three islands in this little group, but Porquerolles is the biggest and the most well-known. It is 7 kilometres (around 4.35 miles) wide and 3 kilometres (around 1.86 miles) long, and it has a wonderful climate—300 sunny days a year, mild winters, and hot summers with a nice, cool breeze. Ideally, May to June or September to October are the best times to go in order to enjoy the good weather but not have to deal with overcrowding due to full-on tourist season.

One of the many beautiful bays in Porquerolles | © Olivier Duquesne/flickr

First, make your way to the town of Hyères where ferries travel to Porquerolles year-round. Boats leave from the harbour, La Tour Fondue, with the company TLV. Cars are not allowed on Porquerolles, so park up in the small car park or there is free parking just above—get there early in the morning to find a space. In the winter, boats can sometimes be cancelled due to high winds.

Alternatively, ferries leave from Toulon, La Londe-les-Maures or La Seyne-sur-Mer with the company Bateliers de la Côte D’Azur from April to September. There is also an airport at Toulon-Hyères with international flights as well as the option to fly/take the train to Marseille or Nice and rent a car. 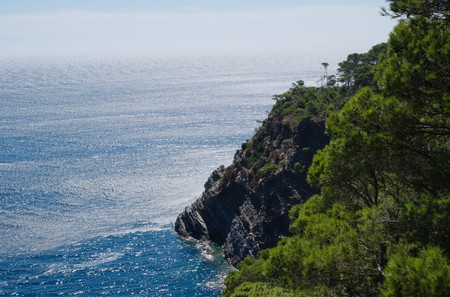 There are many beautiful cliffs on Porquerolles | © Allan Day/flickr

The History of Porquerolles

Porquerolles began as a village built up on the island in the 1820s with a church and lighthouse built later on. In the early 1900s, a local man bought the island as a gift for his wife; and he planted several of vineyards, which still produce some great wine. The French Government bought most of the island in the 1970s, which allowed for the island to be protected from major development. It recently became a National Park, and its plants and natural ecosystem are heavily protected by various conservation societies. 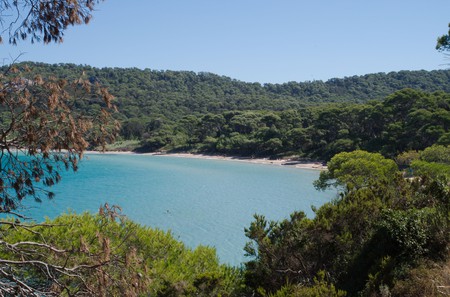 So many beautiful bays in Porquerolles | © Allan Day/Flickr

How To Get Around And What To See

Bikes are the best way to travel since cars are not allowed. You can hire them at the port when you arrive and cycle into the village or around the island to the beautiful beaches.

You can visit Fort Sainte Agathe, a fort built in the 14th century as well as the aforementioned Eglise Sainte Anne and the Cap d’Arme lighthouse. Visit the beaches in the North or the spectacular cliffs in the South. The interior of the island has several paths that have been shaded by eucalyptus trees to provide much-needed relief from the summer sun. 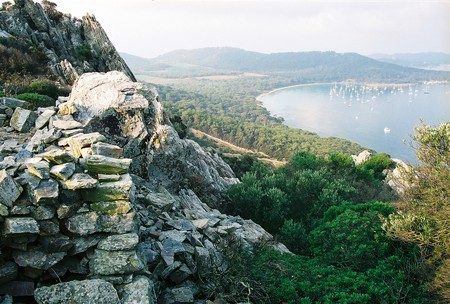 Camping is not allowed (neither are fires) as the island is a conservation area. There are a few options for places to stay, but two that are highly recommended are the upmarket Mas du Langoustier and the low-key, less-expensive Hotel Les Mèdes.

Le Mas du Langoustier is one of the oldest residences on the island and situated in a great spot overlooking the bay with a good restaurant and swimming pool. Doubles start at €300.

The Hotel Les Mèdes is more low-key. It has self-catering apartments with glorious sundecks from €90 per night. 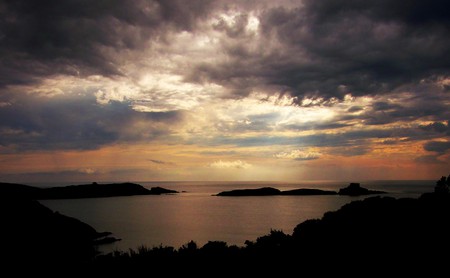 The Mediterranean island of Porquerolles at sunset | © Alpha de Centaure/flickr

It’s best to take a picnic and provisions from the mainland as the village shop is limited and prices are much higher. There are a few wonderful restaurants, like Le Pélagos and Le Mas du Langoustier, the restaurant at the chic hotel.

Le Pélagos is in the village. They serve tapas, and have an outside space.

The Olivier at Le Mas du Langoustier, serves traditional Mediterranean and Provençal dishes, complete with its own pastry chef.

This is a remote island without much in the way of shops, so make sure to bring what you will need including practical footwear, rain gear (just in case), clothes to bike in, towels, sun cream, and hats. If you want to take some relevant reading, the Belgian writer Georges Simenon set two of his novels here: Le Cercle des Mahé and My Friend Maigret.