Amazing Day Trips to Take Around Brittany by Boat 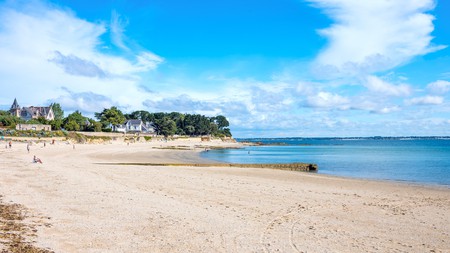 From ancient lands to its stunning coastline, Brittany offers some incredible things for you to experience | © Giuseppe Masci / Alamy

The French coast of Brittany – or Breizh, as it’s known to the locals – is as diverse and storied as they come. With nearly 2,000mi (3,218km) of coastline and more than 700,000 years of human history, this ancient land is best seen by sea. The little-visited region has captured the imaginations of those who happen upon her windswept shores for generations. Whether you prefer sailing or yachting, these are our top picks of the best day trips from Brittany by boat.

Bob around the coast of Brittany by chartering a yacht with SamBoat. 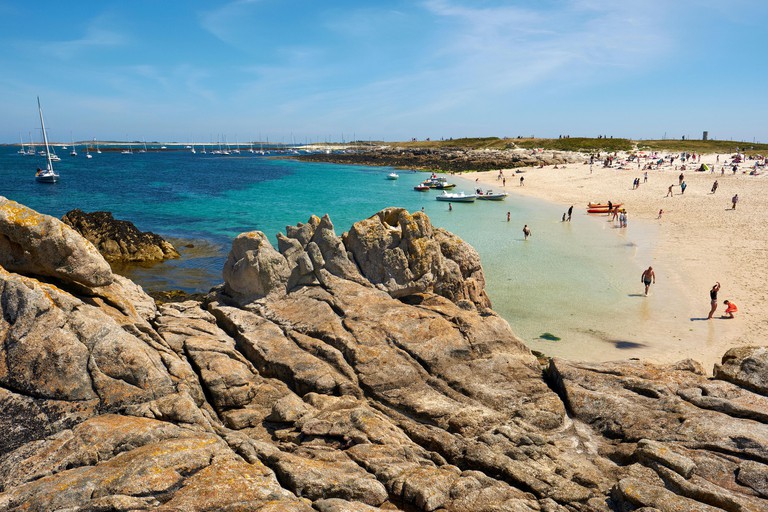 © Eskimo / Alamy
Located 10mi (16km) off the coast of Finistère, the Glénan archipelago is a collection of nine main islands and one idyllic lagoon. These isles are known for diving – in fact, it’s one of the best spots in the Atlantic to do so. Onshore, you’re likely to find an unusual flower carpeting the land. These tiny blossoms are the protected Glénan Narcissus and they’re only found here. Coupled with glassine waters and powder-fine sand, it’s no wonder locals have dubbed Glénan the “Tahiti of Breton”. 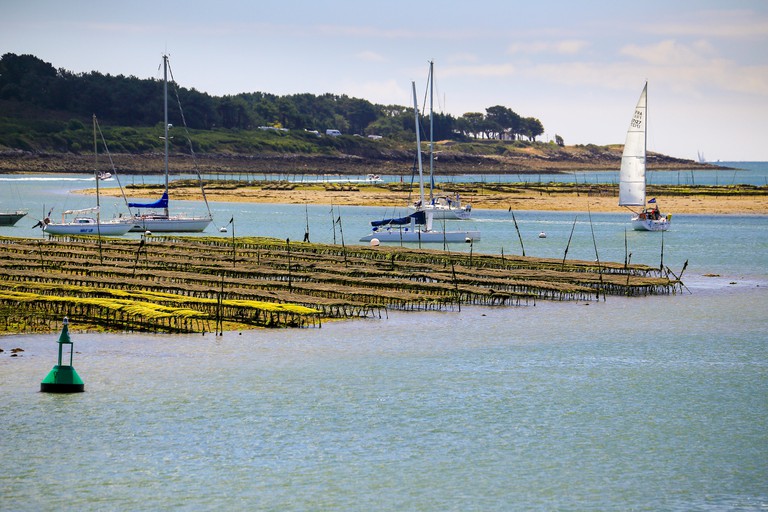 © James O'Sullivan / Alamy
La Trinité-sur-Mer is famous for sailing. Year-round, skippers and sailors flock to its docks to take part in all manner of seaside activities, including some of the most renowned races and regattas – like the Spi Ouest France in May and the Multihull Trophy in August. But there’s more to La Trinité than simply its sails. Here, you’ll find farmed oyster beds off the Crac’h River, beautiful beaches like Kervillen and Men-Dû and the ancient stone megaliths of Carnac – erected stones called menhirs, even older than Stonehenge.

The Gulf of Morbihan 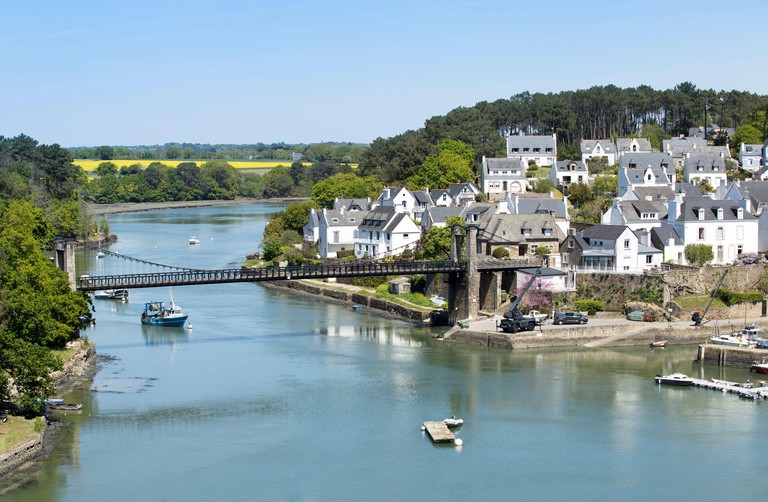 © Mauritius Images / Alamy Stock Photo
Covering some 11,500 hectares (28,417-acres), the Gulf of Morbihan is one of the most beautiful bays in the world. Filled with more than 40 small islands, the Gulf is perfect for a day on its inland sea – hopping from one little landmass to the next. All along the coast, you’ll find seaside villages and wildlife reserves like the medieval town of Vannes – one of the prestigious “Cities of Art and History in France” – or the nature reserve of the Séné Marshland. 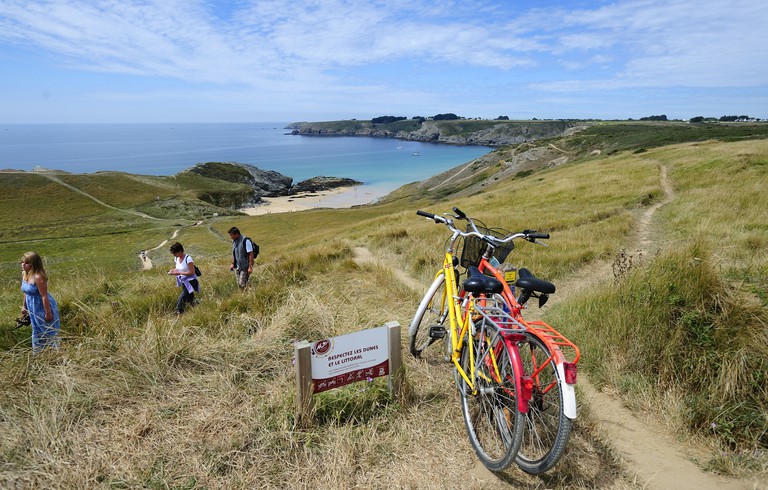 Courtesy of Brittany Tourism
Often simply referred to as Belle-Île, Bronze Age finds suggest it’s been inhabited for thousands of years. Today, it’s a popular haven for artists and sun-lovers – with a warm climate much more like the Mediterranean than the rest of Atlantic-facing Brittany. No less than Monet, Rodin, Van Gogh and Matisse were fans. Less well-known, though, are its culinary contributions to local fare: barnacles – a rare delicacy in Europe – are plentiful here, alongside a rare lamb and honey-making black bee. 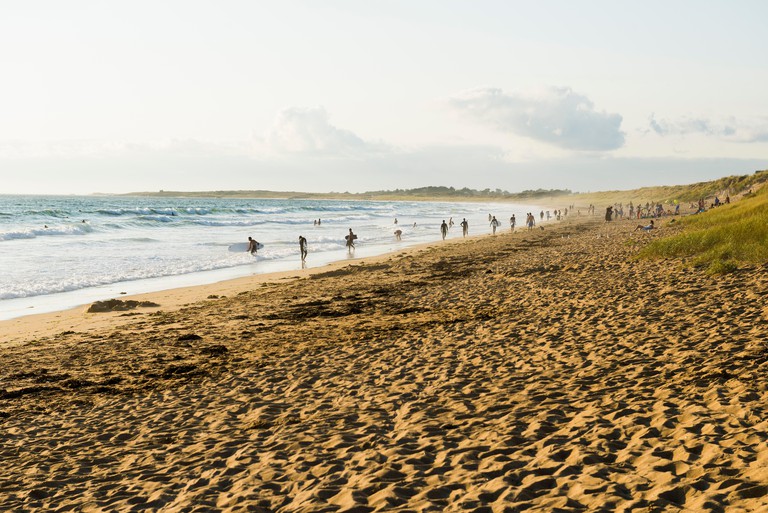 © ImageBROKER / Alamy Stock Photo
Dubbed the “Wild Coast”, the Quiberon peninsula has a rich history, rugged coastline, sandy beaches and old fishing villages, like Saint-Pierre-Quiberon. Most of the coast on its eastern side is off-limits for swimmers – the Atlantic can get quite rough – but it hosts some of the most incredible sunsets, which more than makes up for it. The west is a popular surfing hotspot and hides many mysterious caves and coves. For the intrepid and adventurous, Quiberon is unmissable. 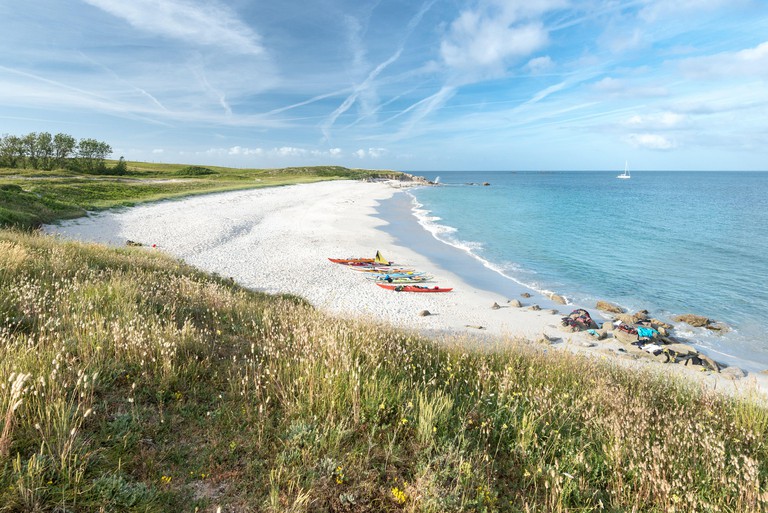 © Hemis / Alamy
This tiny speck in the Atlantic is home to some of the prettiest views in Brittany. With just under 5mi (8km) of coastline, cars are unnecessary as everything is accessible by foot. That’s a very good thing, too, since hiking trails abound and they’re the best way to see all that Hoedic has on offers – like its prehistoric menhirs or ancient stone fort. You’ll even find a small village with floral facades, inhabited by just 120 people. 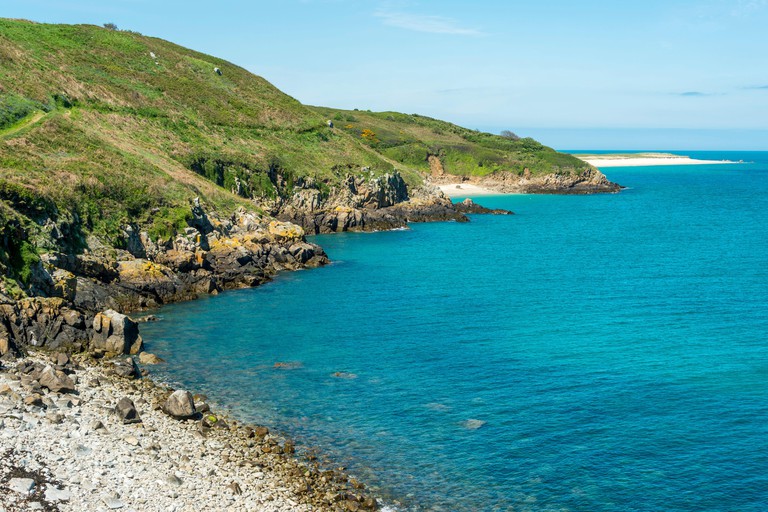 © Douglas Lander / Alamy
Most famous of the Channels, Jersey and Guernsey are well known for their high-end boutiques and luxury shopping, but they’re just the biggest of the islets and reefs that make up this archipelago. Neither truly British nor French, they are in fact Bailiwicks of the Crown – meaning they fall under the jurisdiction of a bailiff appointed by the English monarchy. Much of these islands are unspoiled – we recommend Herm for its flowery splendour, or Alderney, for its old-world fisherman charm. 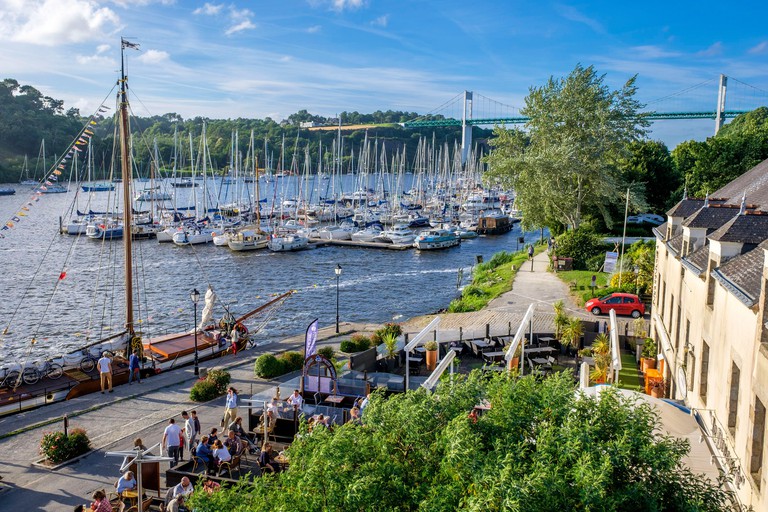 © Hemis / Alamy
La Roche Bernard was founded by a Viking lord around 1,000AD. Thanks to its location on the River Vilaine, it became a bustling port – making the town quite wealthy indeed. Today, it’s best known for its Michelin-starred restaurant, l’Auberge Bretonne and its lively Thursday morning market. The port is also a popular spot for heritage boat owners whose rigs are labelled with the prestigious Bateau d’Intérêt Patrimonial – or “Boat of Heritage Interest” – awarded for their contribution to French maritime history.

Drift down the Brittany coastline by renting a yacht through SamBoat.