The Best Alsatian Dishes You Need To Try in Strasbourg 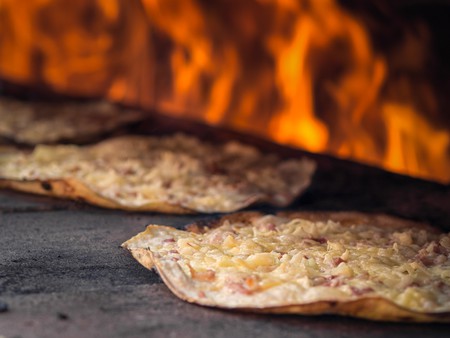 Caught between Western and Central Europe, Strasbourg has a fascinating culinary tradition, and is home to all manner of delicacies you just can’t find elsewhere. Culture Trip takes a look at the very best local dishes in Strasbourg for a true taste of Alsatian cuisine.

Strasbourg is renowned as one of Europe’s heartiest and most unique gastronomic destinations. Its position at the crossroads of France and Germany, drawing plenty of influence from both, makes the cuisine of Alsace, where Strasbourg is situated, unlike anywhere else in the world. 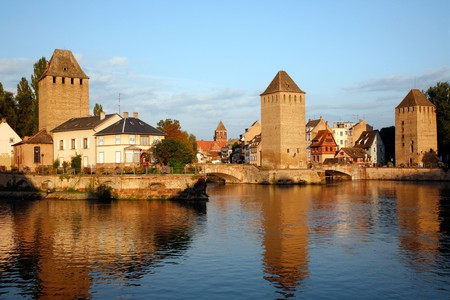 Strasbourg is a city like no other – not quite French, not quite German, but definitively Alsatian | © Yadid Levy / Alamy Stock Photo

Rooted in richness and rustic charm, these dishes are suited to the wintry mountain climate – through the interplay of tart white wine, doughy noodles, tangy sauerkraut and lashings of heavy cream, you’ll find it next to impossible to leave Strasbourg dissatisfied. 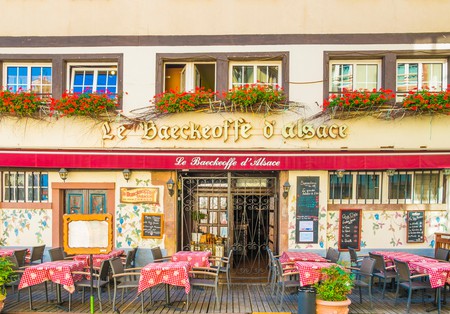 Very similar to sauerkraut (indeed, both terms translate to ‘sour cabbage’), choucroute is a perfect example of how Alsatian cooks can transform something as mundane as the humble head of cabbage into a dinner for kings. To make choucroute garnie, which is in a sense the deluxe version of choucroute, cabbage is shredded and pickled in wine, before being stewed with hardy, fortifying vegetables and all manner of smoked meats, until the constituents of the stew break down and the flavours mingle into one another.

This substantial casserole is named for the Alsatian term for ‘baker’s oven’, which refers to the way it was once made. As a Strasbourg resident, you would gather whatever meat and vegetable scraps your larder had to hand, pack them into an earthenware dish, and hand it over to your local baker, who would seal the lid shut with a strip of dough and leave it in his oven for you to collect the following day. Today, you needn’t seek the baker’s intervention, but the fundamentals are the same: pork, beef and lamb, simmered for hours in potatoes and white wine.

Although the Burgundy version of coq au vin, made with red wine, is far better known abroad, in Strasbourg the dish is prepared with the sharp, sour local white wine. The Riesling gives a slightly tangy touch to the resulting sauce. Served often with boiled potatoes and salad, this is one of the lighter main meals you’ll encounter in Strasbourg, which – after a few days or so – you’ll be thankful to order. 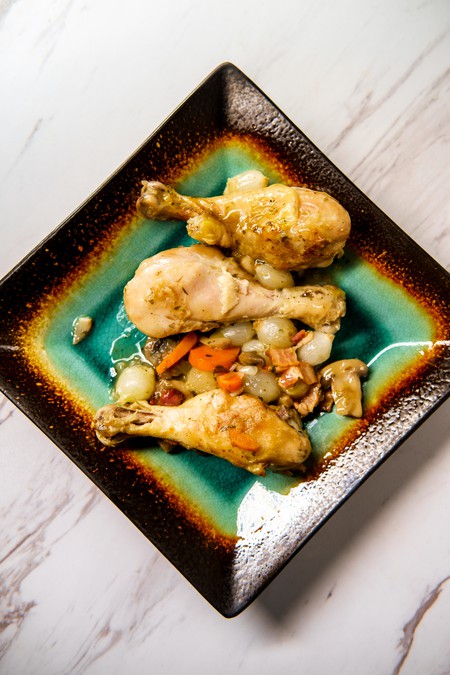 Available hot, cold, as a starter, a main or a snack at any point of the day, the Alsatian tarte à l’oignon is the perfect accompaniment to a pint whenever you’re in Strasbourg. This beloved local dish is available in practically every winstub (or ‘wine room’, as the Alsatians call their inns) in the city. As the name suggests, this pie filled with ladlefuls of shredded, soft caramelised onions, and baked without a lid to soften and sweeten further.

This farmer’s pie, with its origins in the hardy fields of the Alsatian countryside, was – like any impossibly rich pastry dish – designed to be so filling that even the weariest land-labourer could forget his toils (and be fuelled for his future ones) as he tucked in. That being said, you needn’t work a shift in the cabbage patches to try an Alsatian tourte: Strasbourg bakers turn out dozens of these pies, filled with Riesling-marinated meat, every single day for hungry customers.

A distant cousin of the pizza, similar in form but very much not in flavour, Flammekueche (or tarte flambée, depending on who you ask) is a street food that’s much more filling than you’d assume a snack designed to eat on the go would be – so much so that you may not want to move about too much for the rest of the day. Taking a thin disc of pastry, and slathering it in crème fraîche, onions and handfuls of chopped bacon, the dish is a serious serving; for the very best, go to one of the dedicated Flammekueche restaurants across the city. Just remember to cancel any plans you have for afterwards. 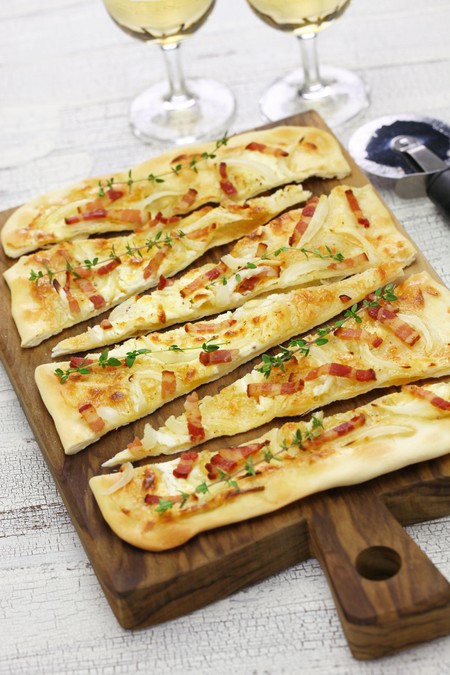 Whether you call it ‘tarte flambée’ or ‘Flammekueche’, you’ll find this Alsatian classic particularly addictive | © Kyoko Uchida / Alamy Stock Photo
Give us feedback