Agnès Sorel and the History of Toplessness 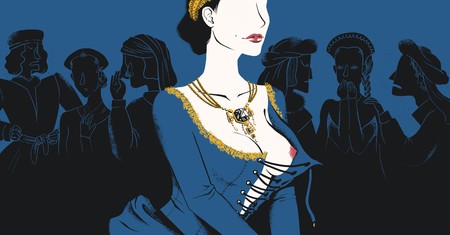 In the 15th century, Agnès Sorel became the first titled mistress. She died under mysterious circumstances at the age of 28, but not before she made the nip slip haute couture.

Agnès Sorel took the French court by storm when King Charles VII declared he was going to leave his pregnant wife for her in 1444. Agnès, born to provincial nobility, found herself in a position to influence the French monarch at the age of 22, her status solidified when Charles VII granted her with the title maîtresse-en-titre. With the title, Agnès became the first officially recognised royal mistress with all the privileges of courtly life.

Though she was allowed in court, her presence was not always welcomed. Agnès was at the heart of many scandals, most of them relating to her fashion choices. The maîtresse was known for her ample bosom and took an if-you’ve-got-it-flaunt-it approach to her assets. Not only did she accentuate her décolletage with an uncut-diamond necklace, Agnès also made a habit of keeping her bodice unlaced so that her breasts were exposed.

French aristocrats were more distressed by her jewellery choice than they were by the sight of a female nipple – two centuries earlier, King Louis IX had passed an act that prohibited the wearing of diamonds by anyone but the king. Agnès stunned the court when she sauntered in with the forbidden jewels prominently displayed. While courtiers gossiped about the indiscretion, Agnès’s proximity to the monarch meant she did not have to fear retribution. It has even been rumoured that she was gifted the world’s first cut diamond.

Painter Jean Fouquet was so inspired by Agnès’s grand tetons that he used her as a model for his painting, The Virgin and Child Surrounded by Angels (c. 1450). Agnès, as the Virgin Mary, sits crowned on a throne, dressed in the iconic blue, an ermine cape around her shoulders and her bodice opened to reveal one milk-white breast the size of the infant Lord’s head.

Fouquet’s painting is one of many from the time period featuring the ‘nursing Madonna’ motif. His intention was not to make Agnès a 15th-century glamour model; rather, Agnès’s bust was used to represent the maternal sacred breast.

Conservative clergymen, already peeved with the king’s decision to make a court appointment for his mistress, were outraged that a woman known for her sexuality was used to portray the Holy Mother. Nevertheless, Agnès remained the king’s darling, a position that gave her authority to shake things up, though likely contributed to her untimely death.

Agnès’s death may have been part of a coup

Pregnant with their fourth child, Agnès died at the age of 28 in 1450 while on her way to visit Charles VII. When Charles VII received news of the death of his unborn son and mistress, he was told that she had contracted dysentery. Charles was suspicious, especially when his advisers began to blame the minister Jacques Coeur. Coeur was later imprisoned – though modern assessments claim the imprisonment was false.

Suspicion surrounding the events was so pervasive that in 2005, Agnès’s body was exhumed. Forensic scientists determined that the true cause of death was mercury poisoning. Mercury was a common ingredient in Medieval cosmetics, but the levels found in Agnès’s body were so high they could only be attributed to ingestion.

Agnès’s sway over Charles VII led some to refer to her as la reine sans couronne (the queen without a crown). She was seen as a successor to Joan of Arc as adviser to the king. Agnès has been credited with helping Charles VII to regain control of his kingdom. It is possible that Agnès was poisoned by someone who did not care for her political strength.

Some theorise that the poisoning was planned by Charles VII’s son, the future King Louis XI, who was already in open rebellion against his father. Louis XI, unhappy with Agnès’s ability to influence his father’s political decisions, might have also worried that a new male heir would threaten his position in the line of succession.

The royal mistress was a trendsetter

Though Agnès died young, her legacy lived on as both ladies and chefs served up their respective dishes a l’Agnès Sorel. In the culinary tradition, her name appears on timbales; veloutés; a garnish made with button mushrooms, pickled tongue and truffles; and a demi-glace of rendered stock and madeira wine.

As time passed, women’s necklines continued to lower. By the 16th century, it was common fashion for women of all ranks to open their apple-dumpling shop* to the public. Exposed ankles and legs were deemed far more likely to drive the delicate male libido to uncontrollable lust.

Perhaps after one too many scalded nipples, women generally stopped exposing their breasts at banquets by the 18th century. However, that did not mean they completely covered up. Eighteenth-century fashionistas covered the chest just above the nipple to preserve an air of mystery, thereby making the occasional (and expected) nip slip that much more titillating.

Prior to her death, Agnès Sorel was granted a papal absolution, despite her role as a mistress. This suggests that there was a level of sexual freedom granted to some women in the late Medieval period that often goes overlooked. As movements like Free the Nipple gain steam, maybe la mode a l’Agnès Sorel will make a comeback.