The Mont Saint-Michel, in Normandy, is one of the most popular sites to visit in France. The high tides and natural beauty of the bay where the Mont lies, as well as the stunning abbey that winds its way up the rock, ensures millions of people flock to Normandy each year. 2015 marks the launch of an improved Mont Saint-Michel, where its maritime character has been restored over twenty years of research, development and construction.

The Mont Saint-Michel dates all the way back to 709, when the Bishop of Avranches, Aubert, was visited by the Archangel Saint Michel in a dream and told to build an Abbey in his honour- this legend is widely known and any local is sure to tell you the story if you ask. Benedictine Monks settled in the Abbey in the 10th century, from there it became a famous site of pilgrimage. The Abbey continued to be built upon more and more until it became the spectacular sight it is today.

The beautiful architectural feat is built like a fortress, winding up the rock it is built on. It was fortified after it became a monastery and has been used as a fortress, indeed it was one of the few sites in France to resist the British during the Hundred Years War. After the revolution it was used as a prison until 1863, but was classified as a historic monument in 1874. Today, it is listed on the World Heritage Site by UNESCO and has been since 1979. In fact, both the bay surrounding the Mont and the Mont-Saint-Michel itself are listed on the World Heritage Site. 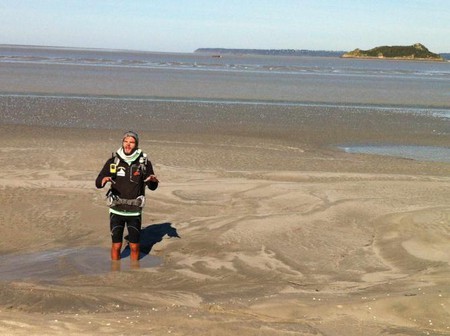 The Bay and the Tides

The Bay of Mont-Saint-Michel is a unique and wondrous part of the experience of visiting the Mont, primarily because of the tides. Due to the gradient of the land and the way the points of the bay come together to create a kind of funnel, when the tide is coming in, the water floods the bay; the first wave is described as a mini tsunami. This spectacle can be viewed from Mont-Saint-Michel itself and at the highest tides, the water can cut off the Mont from the mainland entirely. Watching the bay fill with water from inside the Mont is a surreal experience. The water then drifts out, though not as quickly as it came in, but empties the bay almost entirely. This makes for another impressive natural wonder, as during the day, visitors can walk across and all around the bay- though it is advised to do so with a guide. Walking across the bay that had just hours ago been covered in water, makes you think of the pilgrims who risked their lives to walk across the bay to the Mont, not knowing for certain when the tide would come in. 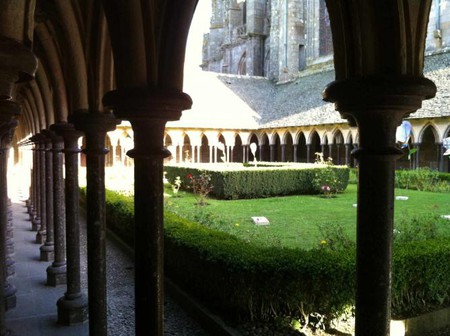 Twenty years ago now, studies were conducted concerning the sustainability of the structure of the Mont Saint-Michel and how the tides and the man made causeway were affecting the environment. They found that if nothing was done to deal with the ecological issues they faced, the Mont Saint-Michel would be surrounded by grass by 2040. In order to preserve its maritime character, major works were undertaken, physically starting in 2005. They built a dam to control the water flow in between and around the tides, so less sediment is built up around the Mont and can be moved throughout the bay, causing less disruption to the overall habitat.

They built a new bridge from the mainland to the Mont, which is 2.5km from the car park, so visitors can take a leisurely and scenic stroll to the Mont, a very quick shuttle bus or even a romantic horse and carriage ride. The bridge is built on stilts, promoting the water flow throughout the bay and making the landscape part of the aesthetic experience of Mont Saint-Michel, encouraging people to walk and see the Mont from a number of perspectives. Approaching the Mont by foot is also reminiscent of how the pilgrims arrived; building on the already exceptional and enchanting experience. Finally, the original causeway which was built, extending all the way to the Mont with the car park at the entrance, has been demolished, allowing the Mont to stand alone in its maritime glory, without the disruption of excessive concrete or cars.

Mont Saint-Michel hosts a number of restaurants serving traditional Norman dishes or an omelette that the Mont is famous for. A very simple omelette that was served to sailors passing through, the omelette is eggs whisked for five minutes straight and cooked in butter, making for a mountainous, fluffy dish. L’Auberge Saint-Pierre, a homely restaurant nestled inside the Mont, serves up one of the renowned omelettes as a starter, followed by local slow-cooked salt marsh lamb, and if nothing else, this is a local dish definitely worth sampling. If you visit the lovely area of Avranches, the wonderful La Croix d’Or boasts beautiful, traditional food with expertly matched wines. The crème brulee is not to be missed. 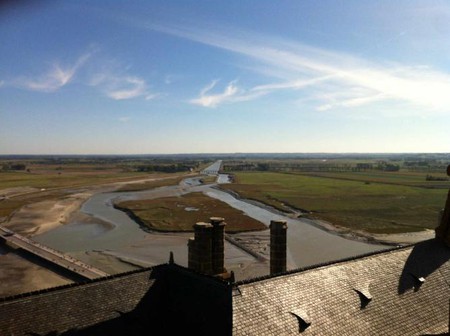 View of the Bay from the Abbey | Courtesy of Hayley Ricketson

Things to See & Do

There is no shortage of things to do at Mont Saint-Michel, or its surrounding areas. When visiting the Mont, a walk around the bay at low tide is a unique and breathtaking experience. Walking across the sand with the vast landscape around you, knowing that in a few hours it will be covered in water is an astonishing experience. It must be a guided walk around the bay as beyond the high tides, there is also quicksand hiding throughout it. Do not be alarmed though – your charming guide will demonstrate the best way to deal with quicksand by jumping into it themselves, all the while explaining the complexities of the relationship between the sun, moon and the tides.

Once you’ve been on a bay walk, a wander around the winding village of Mont Saint-Michel and taking in its beautiful views and architecture should adequately prepare you for the incredible Abbey the Mont is famous for. Though it is like a maze, it is definitely a place you will be happy to be lost in. The rooms, gardens and towers are rich in history and visually breathtaking. You can imagine the monks writing scripts by hand in the garden or the prisoners trapped in dark cells when it was used as a jail. It is a truly captivating place, which is now being used for events, like music concerts and exhibitions.

Beyond the Mont Saint-Michel, some places to check out in nearby Norman areas would be the Scriptorial in Avranches, where you can see original scripts written by the monks themselves, and the Eco-museum of the bay, where you can learn about the flora and fauna and the popular occupation of salt-mining. It is also highly recommended to drop by the local dairy farm, Cara-Meuh, where you will unquestionably need to sample and buy a variety of their homemade caramels. It is the perfect way to end a trip to Normandy. 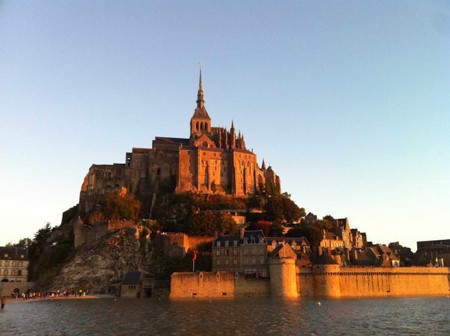 More information about the Mont can be found at the Normandy Tourist Board.

For travel to and from the Mont (from the UK), make sure you check out Brittany Ferries.

Hayley Ricketson is a playwright and general theatre practitioner from Melbourne, Australia. She recently completed a Masters in Text and Performance at the Royal Academy of Dramatic Art (RADA) and Birkbeck, University of London.