A Pilgrimage to the Basilica of St. Thérèse, Lisieux 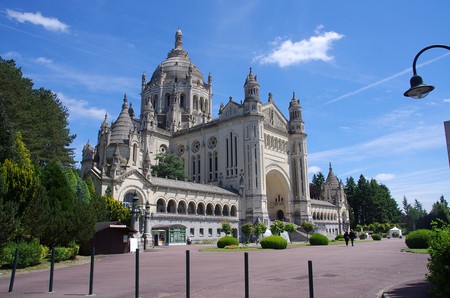 The Basilica of St. Thérèse in Lisieux, France | © mickaetmanue8 / Pixabay

Looming over the city like a sentinel from its hilltop location, the sheer size of the Basilica of St. Thérèse in Lisieux is a sight to behold. The second-most visited pilgrimage site in France after Lourdes, it can accommodate up to 4,000 people and welcomes over 2 million visitors annually.

The Basilica of St. Thérèse was created in honour of St. Thérèse of Lisieux, also known as “The Little Flower of Jesus” or simply, “The Little Flower”. St. Thérèse was canonised in 1925, the same year the basilica was envisioned. However, it wasn’t until 1927 that plans to build the basilica were confirmed, partly to accommodate the growing number of pilgrims who were flocking to the famed nun’s site of death. In fact, Pope Pius XI even put out a call for donations to finance its construction.

A homage to the beloved St. Thérèse

St. Thérèse, born Marie Françoise-Thérèse Martin, felt a religious call early in life after enduring a series of hardships from a young age and joined the Carmelite nunnery in Lisieux at the age of 15. She was lauded for taking a gentle, yet practical, approach to her spiritual life as well as for her kindhearted nature and was named by Pope Pius X as “the greatest saint of modern times”. In 1897, she died from tuberculosis at the age of 24. 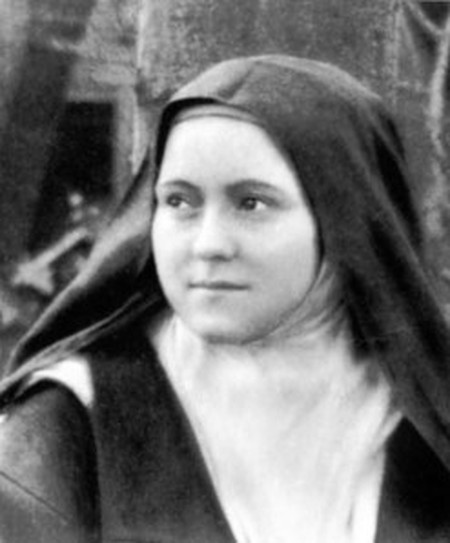 The basilica is often compared to Sacré-Coeur in Montmartre

If the church feels familiar to you, that may be because the Basilica of St. Thérèse uses the same Roman-Byzantine style as that of Paris’s Sacré-Coeur Basilica in Montmartre. Sacré-Coeur indeed served as inspiration for the architect selected for the project, Louis Marie Cordonnier, who is the mastermind behind other structural marvels, such as the Opera House of Lille and the Peace Palace in The Hague. Cordonnier began drawing up plans in 1927 and started works that same year.

A call was placed to Christians across the globe for funding, many of whom graciously donated; a marker of their devotion to St. Thérèse and allowing for quick completion of the project. In 1930, there were over 200 people working day and night on the church, which officially opened in 1954. 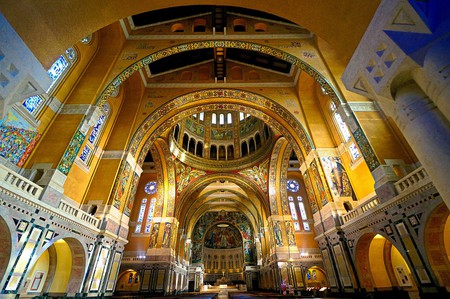 The striking interior of the basilica | © ddouk / Pixabay

Though swiftly executed, the structure is robust, a feature that can be noted just by looking at its sturdy exterior, which is made of marble, concrete and granite from the Norman region of Vire. Inside, dazzling mosaics of yellow, green, red and blue adorn the ceiling, depicting Byzantine patterns and images that outline St. Thérèse’s life mission and her innate faith in her love of God. Sunlight that filters through the stained-glass windows transform the mustard-yellow walls into a golden hue.

Preparing for your visit to the Basilica of St. Thérèse, Lisieux

There are daily, direct trains to Lisieux from Paris’s Saint-Lazare Station departing approximately every hour. The total travel time takes around 1 hour and 40 minutes. Once you arrive in Lisieux, the Basilica cannot be missed. The train station is found at the base of its hill and it’s accessible by foot. Should you choose to drive, expect about a two-hour drive from Paris – there is a car park at the monument. The basilica is free to enter and it is open daily. 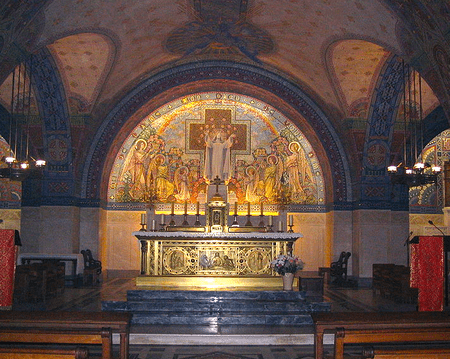 The crypt of the Basilica of St. Thérèse | © Jmalo / WikiCommons

Year round, the basilica has exhibitions on the life of St. Thérèse and the Carmelite nuns among whom she lived a cloistered life devoted to God. There are also guided tours available in the summer that last around 45 minutes and visits to the dome are offered in July and August. Be sure not to miss the marble and mosaic draped, three-nave crypt. For those interested in learning more about the late saint, consider making a visit to her family home, known as Les Buissonnets, which is found an approximately 20-minute walk from the church. There is also the Carmel monastery, a 10-minute walk from the basilica, where St. Thérèse lived her life of devotion.

For stunning architecture and fascinating history, visit the Basilica of St. Thérèse in Lisieux, a massive basilica devoted to the late and beloved Saint Thérèse.