A French Legend Is Receiving a Star on the Hollywood Walk of Fame—About Time! 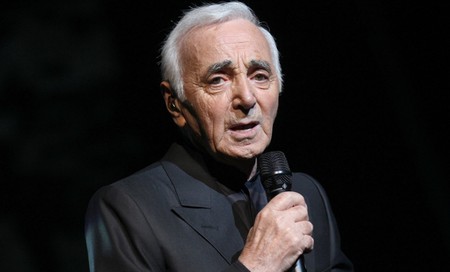 The French musical legend Charles Aznavour, ‘France’s Frank Sinatra’ is finally receiving his Hollywood Star at 93 years old, and not a day too soon. But why is this French crooner sharing the pantheon of entertainment alongside icons like Elvis Presley or Michael Jackson?

In an international singing career spanning seven decades, Charles Aznavour has sold more than 180 million records worldwide. He has recorded a whopping 1,400 songs—1,300 of which he personally wrote.

His signature style is to tell a story in music, and make a person feel as if this was the first time he was singing this song, that he had personally written just for them. He dwells on romantic love and broken hearts, yes, but he doesn’t shy away from personal engagement or taboo subjects. In the ’70s, he sung about a gay transvestite in “What Makes a Man,” a song he reprised to great acclaim in 1995 at Carnegie Hall.

Even those not familiar with his name will recognize his songs. Whose heart hasn’t melted to the soundtrack of the film Notting Hill (1999), with Elvis Costello’s cover of “She”?

Aznavour’s narrative lyrics crossed over into English and he went on to conquer the UK and US, producing over 390 albums, all in multiple languages: French, English, Armenian, Spanish, Russian, German, and Italian. Many of his records have gone gold and platinum.

“Charles Aznavour is a popular entertainer known around the world and loved by millions of fans across generations,” said Ana Martinez, of the Hollywood Chamber of Commerce. “We are thrilled, as we know the people of his homeland France are to see his star dedicated on our historic Walk of Fame.”

In 2016, the Armenian community in California dedicated a symbolic star similar to the Walk of Fame to the artist in recognition to his contribution to Armenian identity and culture. Aznavour serves as Armenia’s ambassador to Switzerland and to UNESCO in Paris. He has also campaigned strongly for anti-piracy laws, as well as international copyright and intellectual property protections.

The critics that dubbed him as ‘too ugly’ or ‘too short’ at the beginning of his career would not have envisioned that Aznavour would go on to perform with the biggest names in showbusiness, from Edith Piaf to Julio Iglesias, Céline Dion or Elton John. At 93 years of age this charismatic luminary continues to write and perform on the world stage, and his star shines as bright as ever.

“I feel like I’m meeting my family, whether they’re Italian or Spanish or from elsewhere,” Aznavour said in an AFP interview last October. “The audience is part of my family. The stage is where I’m happiest.”

Aznavour’s star on the Celebrity Walk of Fame is being unveiled on Thursday, August 24, 2017.