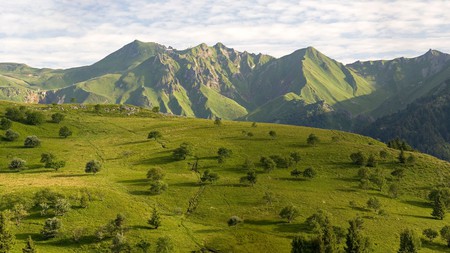 The rich, volcanic soil of the Auvergne makes this region of central France a bountiful destination for any foodie. Cheese, wine, sweets and more are on the menu in its verdant, mountainous landscape. Culture Trip guides you through the best way to experience the Auvergne’s excellent produce and delicious cuisine. 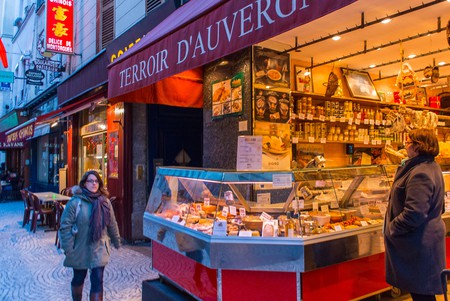 The Auvergne region lies right in the centre of France and boasts a rich culinary heritage. The volcanic soil here makes it a fertile region and contributes to its impressive food production; the area boasts five types of cheese that have been given the coveted Appellation d’Origine Protégée (AOP) label, as well as wines, charcuterie and more. Take a drive through the rugged Auvergne countryside to discover the wide variety of products, and perhaps visit local farms along the way, which are more often than not happy to give a tour of their production processes and even a tasting of their creations.

But it’s not just rolling fields and vineyards. The Auvergne is also home to several major cities, including Clermont-Ferrand, famously the home of the Michelin tyre company (and founder of the Michelin Guide of restaurants), and Lyon, recognised by most as the culinary capital of France. Using one of these cities as a starting point is the perfect way to discover some of the many culinary specialities of the region.

Over 40 of France’s very best cheeses bear the AOP label, which protects the ancestral production methods of some of the country’s favourite foods. The Auvergne is home to five of these cheeses: cow’s milk blue cheeses bleu d’auvergne and fourme d’ambert; pressed cheeses salers and cantal; and nutty, washed-rind cheese saint-nectaire. The 38 AOP-recognised producers of these cheeses in the Auvergne have now united along the Route des Fromages AOP d’Auvergne, encouraging visitors to discover, taste and purchase their creations. You can pick and choose where to go on the route, taking in the cheeses of your choice.

It’s worth noting that there are also some exceptional Auvergne cheeses that don’t have the AOP designation, such as the denser fourme de montbrison, garlicky gaperon and cheese-mite-covered artisou. These, too, are well worth tasting if you find them on offer. 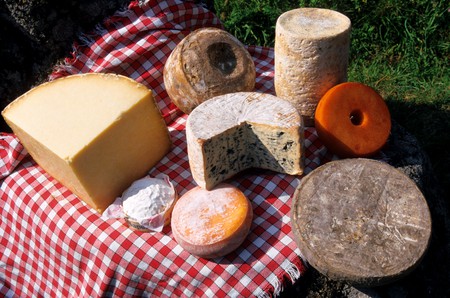 Cured meat is made throughout France – and Europe – but the Auvergne is particularly well known for its saucisson sec (dry-cured sausages). The small, family-run Salaisons Marion still makes it the old-fashioned way, with no nitrates or additives and a light hint of smoke – the massive Gros Jésus (‘Fat Jesus’) version is a must-try. Salaisons Marion lies in the small town of Saint-Martial, located within the Parc Naturel Régional des Monts d’Ardèche near a picturesque lake. 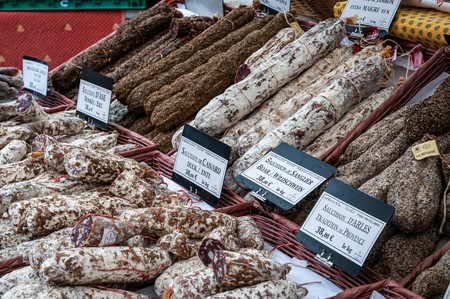 Dine at a bouchon in Lyon

The city of Lyon is known for its bouchons – local restaurants that serve hearty French food including pâté-croûte (meat-stuff pastry), pike quenelles, andouillette (coarse-grained sausage), pot au feu (beef stew) and praline tarts. The tradition of the bouchon dates back to the 17th and 18th centuries when local workers visited small inns, and these restaurants tend to be convivial and welcoming. L’Association de défense des bouchons Lyonnais recognises about 20 “official” bouchons in Lyon. Give one (or several) a try, and be sure to arrive hungry.

Visit the Saint-Pierre Market in Clermont-Ferrand

Clermont-Ferrand is home to the headquarters of the renowned Michelin Guide, so it’s no surprise that it’s a haven for foodies. A Saturday morning visit to the covered Saint-Pierre Market is a must; it boasts stalls devoted to local produce, charcuterie, cheese and more. Browsing the market is one of the best ways to get a feel for the city, and its range of stalls give a sense of the culinary diversity that the Auvergne has to offer. 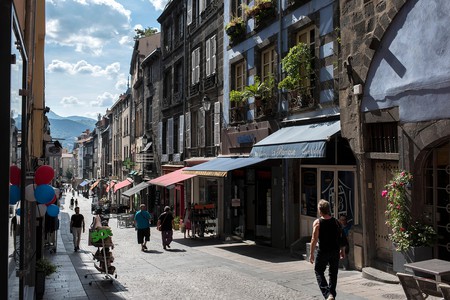 Dine (and stay) at Serge Vieira

In the heart of the Cantal region, chef Serge Vieira, who earned a coveted Bocuse d’Or at only 27 years old, has converted a former Medieval castle into a fine-dining restaurant, Serge Vieira, with three luxury hotel rooms. In this incomparable setting, discover the chef’s inventive, aesthetically pleasing, contemporary French cuisine. The tasting menus at this two-Michelin-star address are truly stunning.

Since 1882, the Weiss family has been creating delicious chocolates in the city of Saint-Étienne, and today, you can see exactly how they’re made at the Weiss Chocolate Factory. Just outside the city centre, you can explore the chocolate-making process from above – a walkway bordered with glass windows hovers above the production line, allowing chocolate lovers to watch expert hands create each Weiss chocolate. The shop downstairs has free samples and chocolatey treats to take home.

Learn how cutlery is made in Thiers

The city of Thiers has been a centre of knife and cutlery making since the Middle Ages. Today, the city is home not only to a cutlery-making museum but also to several workshops and factories still producing the tools using traditional techniques. For an activity a little different to your usual foodie itinerary, some places, including Coutellerie Robert David (a company that has been making knives in the region since 1919), offer tours of their factories so that visitors can see how cutlery is created.

Within the former province of Bresse, farmers have been raising speciality Bresse chickens for centuries. Indeed, famed French gastronome Jean Anthelme Brillat-Savarin (1755-1826) reportedly described these chickens as “the queen of poultry, the poultry of kings”. Beloved by top chefs around the world, the birds are raised free-range for at least four months and fed a strict diet that is kept low in protein to encourage them to forage for food themselves. With blue legs and a red crest, these birds are also said to sport the colours of the French flag.

Many restaurants in the city of Bourg-en-Bresse serve poule de bresse either roasted or in a cream sauce; L’Auberge Bressane is particularly recommended. 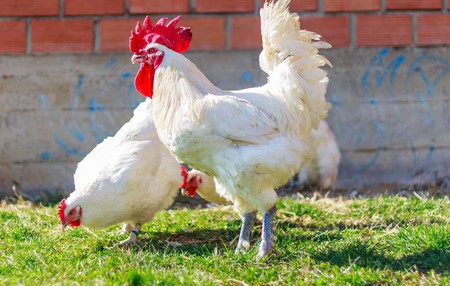 Bresse Gauloise chickens have been described as ‘the queen of poultry, the poultry of kings’ | © F. S. / Alamy Stock Photo

The volcanic soil in Le Puy is perfect for the cultivation of tiny green lentils – the very first vegetable to acquire the coveted Appellation d’Origine Contrôlée (AOC) status in 1996. Nicknamed ‘the caviar of the poor’, puy lentils in the Auvergne are often served stewed with sausage as a protein-rich, wintertime meal. They frequently appear on the menu at restaurants Tournayre, l’Ecu d’Or and Brasserie La Trifolle, all of which are in the heart of picturesque Le Puy-en-Velay, whose chapel is perched on a volcanic peak overlooking the city. 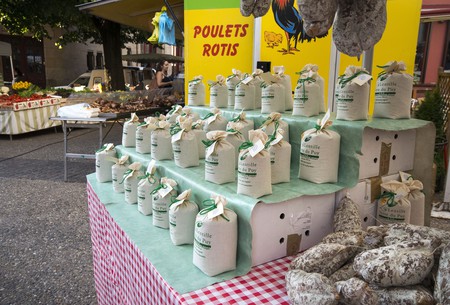 The long tradition of winemaking in the Auvergne, unfortunately, fell by the wayside when the area was overrun by phylloxera (plant louse) in the 19th century, alongside a large proportion of France’s vineyards. Luckily, numerous young winemakers are restoring the winemaking tradition in the region, not in the least of whom is Patrick Bouju. His Domaine La Bohème is in the village of Glaine-Montaigut in the heart of the Auvergne’s wine region, which is fondly described as the Tuscany of the Auvergne. Bouju produces wines without sulfites or additives, creating a delightful expression of local terroir (the environment in which a wine is produced).