A Brief History of the Cathédrale Sainte-Réparate in Nice 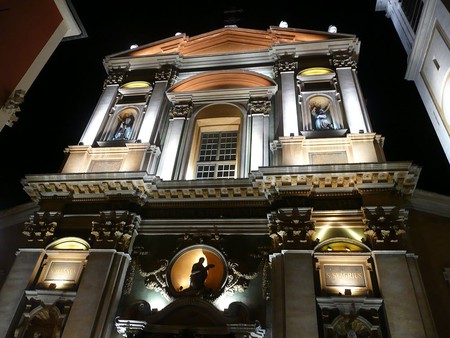 The Sainte-Répérate Cathedral in Nice is a cultural and historical landmark. Here’s a brief history of the building and why it’s so important to the town.

Saint Reparata was a 15-year-old Palestinian girl, who was killed for her religious beliefs in the third century. She was supposed to be burnt alive but was apparently saved by rain. Instead she was beheaded, and legend has it that her soul immediately turned into a dove and flew away. Her body was put into a boat and blown by angels’ breath across the sea to arrive in the bay in Nice, in what is now the Baie des Anges (Angel Bay). The cathedral is named after her and has lots of her artefacts. She is the patron saint of Nice (and used to be in Florence, until the Middle Ages). This cathedral is hugely important, therefore, to the entire religious community of Nice.

There has been a cathedral on the site since the 11th century but, after Saint Reparata’s belongings arrived in Nice, additional buildings were added over the years to the original site. It was in the 17th century, though, that the current cathedral was built (1650-1685) and it was consecrated as a holy site in 1699. But work continued on the site – a bell tower was built in the 18th century (1731-1757), the facade was improved in the 19th century (1825-1830) and baroque touches were added. In 1949, the cathedral achieved basilica status. (Cathedrals become basilicas if they are instrumental to the Christian religion, if saints were martyred on the site, or if the cathedral has their “relics” – parts of their bones or bodies.) When it was first built, the church was in a rectangular shape and oriented towards the north. When it was rebuilt in the 17th century, it was built in a Latin style, in a cross-shape, oriented towards the east. There are over 10 chapels inside, commemorating different saints.

There are eight other churches in the Old Town alone but the Cathedral Sainte-Réparate is the oldest and the most ornate. It has really been the religious heart of the city for over 400 years. After the terrorist attacks on the Promenade des Anglais in Nice in summer 2016, the remembrance service was held at the Cathedral and attended by prominent politicians. Mass is held from Tuesday to Friday at 10am.

Places To Eat Nearby

Nice has its own speciality – a chickpea pancake that you must try on a visit to the town. It’s called socca and there are lots of places to try it, but one of the best is René Socca. It’s open Tuesday to Sundays (9am to 10pm). Alternatively head to Lou Pilha Leva, an institution in Nice, specialising in socca. It’s rough and ready, and only has outside tables, but people adore it. It’s open Monday to Saturday (11am to 12am). Both are delicious.