A Brief History of Plage de Tahiti, the Most Iconic Nudist Beach 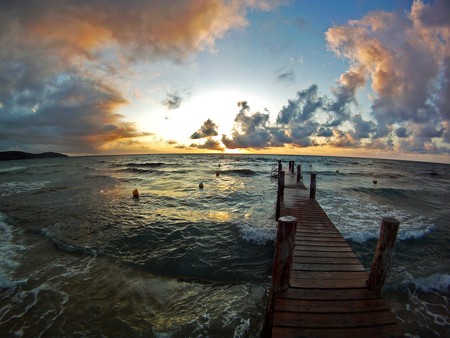 The Plage de Tahiti, on the famous Pampelonne beach, is one of the most well-known beaches in St Tropez. Here’s our run-down on everything you need to know before you visit.

Pampelonne beach is actually five kilometers south of St Tropez, but is probably the image that people have in their head when they think of St Tropez. It half belongs to St Tropez and the other half belongs to its neighbor, Ramatuelle. It’s a beautiful, wide, sandy beach where the Allied forces landed in 1944 and whose notoriety has only increased since. It’s where the famous 1956 movie, Et Dieu… Créa La Femme (And God Created Woman), was filmed with Brigitte Bardot.

Ever since the 1950s, it has been the beach to see and be seen. Every summer, about 30,000 people descend on the beach every day. This puts a huge strain on the local beach ecosystem, which includes delicate sand dunes. A few years ago, one of the most infamous beach clubs, La Voile Rouge, was demolished by Local Authorities after a ten-year legal battle, because of the damage being done to the beach by a constant stream of visitors. It’s a difficult balance between local livelihood and protecting natural resources, a battle which is still ongoing.

The Plage de Tahiti is at the northern end of Pampelonne beach, recognizable by its lovely pontoon and its many visiting celebrities and rock stars. It’s surrounded by pine trees, which you can reach after walking down an unpaved road. In the 1960s, nudist sunbathing became more common in France. It was seen as a way of empowering women by letting them choose to wear what they liked (or not) and enabling women and men to dress equally on the beach. Tahiti beach emerged as a “clothing optional” beach, with lots of tussles between the police and beachgoers over what they should wear, although the nudists won. Today, it’s still a place where people are allowed to hang out in the nude, but most nudists prefer the more formal nudist colonies nearby.

There are a number of great places to eat directly on the beach. The Tahiti Beach is a seafront hotel with a lovely pool and the restaurant is great. It’s open from 12 to 5:30 p.m. Established in 1946, it’s the oldest of any of the beach clubs and an institution.

The Tabou Beach Club is the place to hire sun loungers, where waiters bring you delicious drinks and serve you food on tables at the water’s edge.

The Restaurant Plage Tropézina is another option, where you can find amazing food in a sublime location.

Remember that this is St Tropez and sitting on the most famous beach in the region will cost you. Don’t expect change from €50 for lunch in any of the restaurants. Sun loungers and parasols will probably cost €30. It’s the price you pay for being super chic. That said, you can take a towel, a picnic, and enjoy the same space as everyone else, for free.