A Brief History of Choucroute from Alsace 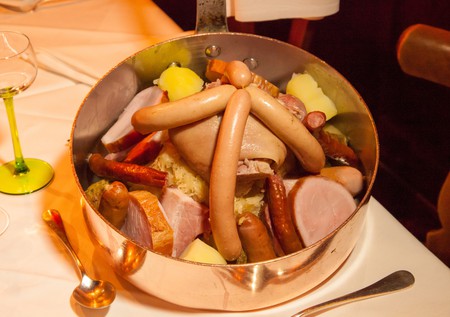 Did you know that the typical dish of Alsace reached France via the Great Wall of China courtesy of Attila the Hun? Strictly speaking, the word choucroute is French for sauerkraut, but since the 20th century it’s been used to refer to the Alsatian dish choucroute garnie, with its assembly of sauerkraut braised in white wine and an assortment of sausages, ham, fresh and smoked pork, steamed potatoes, with a dash of mustard. All washed down with the local wine, preferably a similar variety to the one used in its preparation. Here’s a quick history of the hearty and delicious choucroute.

The Long Road from China

According to the Confrérie de la Choucroute brotherhood – an Alsace institution aimed at celebrating and preserving the tradition – the method of preserving the fermented cabbage in brine came from China. It was first recorded by the fearsome Attila and his Huns, who discovered this method when they came up against the Great Wall. The preparation was very effective to feed workers and soldiers in these hard-to-reach arid regions. 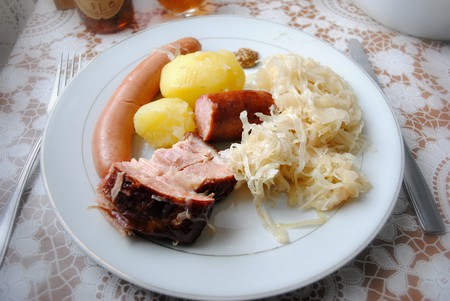 A plate of homemade choucroute | © Vinicius Pinheiro via Flickr

Incidentally, in French the word chou is a term of endearment. You can say mon chou to refer to your loved one or to a small child. One reason the humble cabbage became so well loved in these parts is that although planted in late Spring, depending on the variety, it can keep going well into November when everything else in the garden has turned into a soggy patch of mud.

Anyway, back to our Huns. Things didn’t go so well in China, so they proceeded west through Bavaria and Austria, reaching Alsace in 451. The first references to the recipe date back to the 15th century, when it was served at the table of the monasteries, and from the 17th century onwards, the first manufacturing plants for the industrialization of cabbage barrels began in Strasbourg.

Today you can sample the wonder that is an authentic platter of choucroute garnie all over Alsace, notably in its capital Strasbourg, and at institutions such as La Maison de Tanneurs, in Petit France or Maison Kammerzell just across from the cathedral. 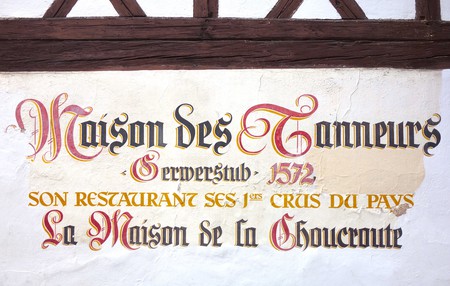 The Indication d’Origine Protegée or IGP is a certified geographic designation to protect the ancestral Alsatian know-how. To qualify for the appellation, the cabbage must not only be produced in the region, but also comply with a series of stringent requirements. Among other constraints, the chou must weigh a minimum of 3 kg and have a maximum of three slightly green leaves on the top of the cabbage after removal of the wrapping leaves. The rules also provide for a natural fermentation without additives or modification of the temperature, and cooking must take place in Alsace. Finally, Choucroutiers are required to use Alsatian alcohol, either white wine, crémant sparkling wine, or beer.

While choucroute garnie is typically made with pork, you may also come across other combinations made with fish and duck.