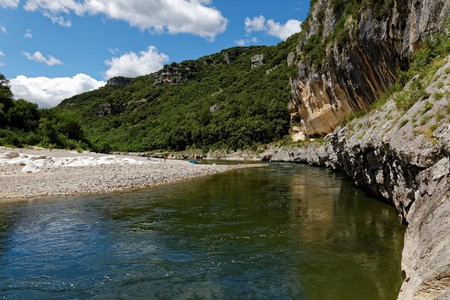 For wild swimming, France offers up a whole host of options all over the country, from fresh rivers to mountain lakes, and from dramatic waterfalls to turquoise pools. Here are the top eight epic places for wild swimming in France.

Located near La-Roque-sur-Cèze village, labeled as one of the most beautiful villages in France, Cascades du Sautadet are a series of incredible waterfalls formed by the Ceze river. Strong currents are formed by the waterfalls and so swimming is recommended in the calmer waters a little away from the waterfalls. Cascades du Sautadet is classed as a natural area, so make sure you head to the public left bank as the right bank is private. 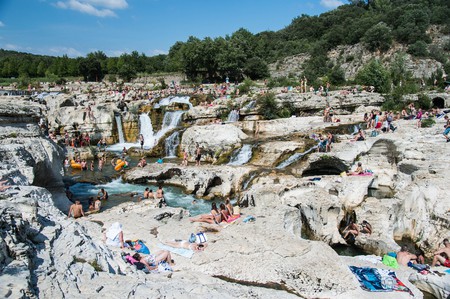 Lac d’Ilay is a natural glacial lake in the Jura department of France covering an area of around 72 hectares. It has the most idyllic turquoise waters with a little island in its center. Undulating hills form an attractive backdrop and given its vast size, even in high season, it’s a fairly tranquil spot. Swimming isn’t supervised here, so you completely feel like you’re at one with nature.

This is a really special spot in France. Straddling the Ardèche River, this natural bridge sees thousands of adventure lovers pass under its arch each year. If kayaking or hiking aren’t your scene, the banks on the Ardèche River make for the perfect cast-off spot for swimming. Another favourite area other than the Pont d’Arc on the same river is in the shadows of Balazuc village. 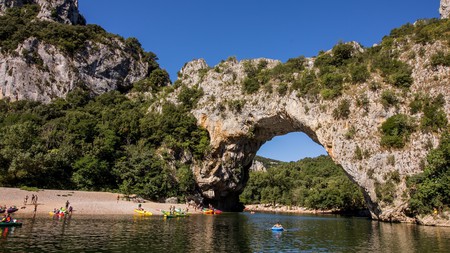 The impressive Pont d’Arc in the Ardeche | © Sandrine Néel / Flickr

Lac d’Annecy has some of the purest waters in Europe and can reach 26 °C during the summer months. Bathing is, of course, on the cards, but if you’re after something more active, there is water skiing, windsurfing, diving and more. The old town of Annecy is to the north of the lake and the perfect place to make as your base during your exploration of the region. 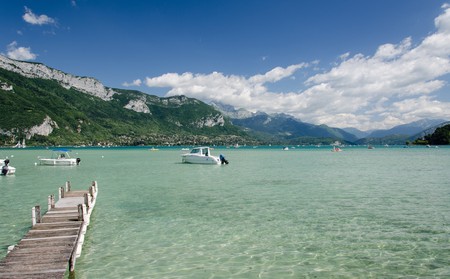 There are lots of super swimming spots in the Languedoc, and one of them is a UNESCO World Heritage site, Pont du Diable (Devil’s bridge). Except for the stones, you’ll feel like you’re at a beach on the Mediterranean when wading through the waters. But when you look up, you’ll see rugged, hilly peaks punctuating the sky. Whilst there, don’t miss the other UNESCO World Heritage site in the area, the beautiful village of Saint-Guilhem-le-Désert. 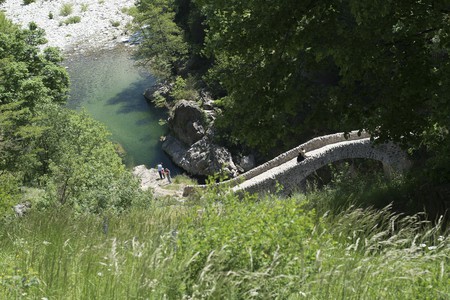 Located in the Pyrenees is this magnificent lake with even more stunning backdrops. Even though it lies in a remote location, Lac de Gaube is very accessible and is often used as the starting point for a lot of the long-distance hiking routes that weave up into the mountain range. There is even a little cafe on the banks of the lake, with, as you can imagine, the most incredible views. Perfect for an after-swim refreshment. 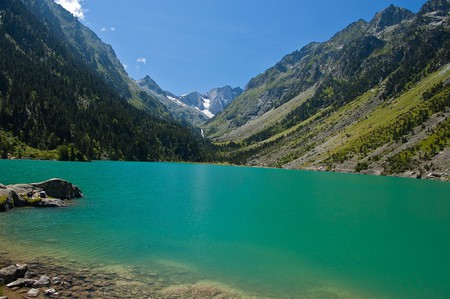 A scenic (but incredibly small, so not for the faint-hearted) road takes you to this incredible spot in the South of France. It’s called balcony road, being that it hangs over the landscape. The green waters look striking against the white rocks, and at varying points throughout this stretch of water you’ll pass by kayakers and rock climbers. With potholing being a popular sport in this area, just make sure you know your route back up when descending into each mini canyon.

Sillans-la-Cascade almost looks like a fantasy. So magical is this waterfall that the nearby village was named after it. The water is usually pretty nippy but provides a refreshing dip nonetheless, especially if visited during the summer months. If you’re not too keen on swimming, then there are amble hiking trails around the village and waterfalls to take in the beautiful scenery. 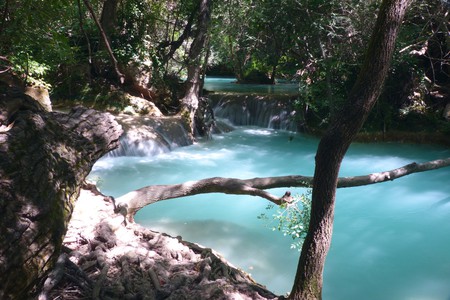 Sillans-la-Cascade in Provence | © Sébastien FAILLON / Flickr
Give us feedback