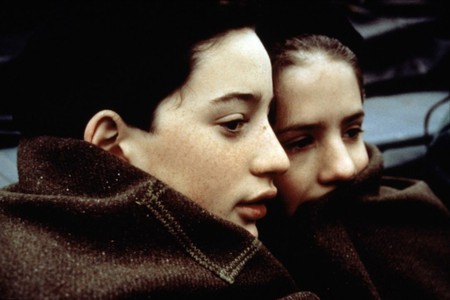 Courtesy of The Criterion Collection

It’s been 30 years since the release of the heartbreaking French film that left no heart untouched. Au Revoir Les Enfants (Goodbye, Children) is set in a French school, where Jewish children during the Nazi occupation are hiding is a timeless tale of friendship, loyalty, and loss of innocence.

Written and directed by Louis Malle, Au Revoir Les Enfants tells the story from the point of view of Julien Quentin, a privileged young boy who clings to his mother and is reluctant to go back to the provincial boys’ boarding school. Julien acts tough with the other students to mask the fact that he misses his mother and still occasionally wets his bed. During that winter of 1944, the arrival of three new students breaks up the dreary school routine. One of the new arrivals is Jean Bonnet, about the same age as Julien, who seems to prefer to keep his distance, is good at math, and plays the piano.

A Portrait of the Purest Friendship

Julien wakes up in the middle of the night and catches Jean discretely lighting candles and saying a different kind of prayer. Later, rummaging through the boy’s locker, Julien finds a book with Jean’s true name and putting two and two together, he realizes Jean is Jewish. Julien at first is hostile to Jean, not because of his origins but because his intelligence and natural talent threatens Julien’s standing as the top student. But after they get lost in the woods together on a treasure hunt they form a close bond that completely overrides the difference in their backgrounds.

The Complexities of the Occupation

The nuanced storytelling portrays the many layers of the complexity and challenges facing France during the occupation. There are no sharp us-and-them lines. While some otherwise ordinary people turn into informers or collaborationists, others become quiet heroes like the French priests concealing the true identities of the hunted children. Then there’s the rest of the silent majority who confirm that the only thing necessary for the triumph of evil is for good men to do nothing. In one scene, the local collaborationist militia harasses a Jewish patron in an elegant restaurant, and while French patrons make feeble noises of indignation, it is ironically a German officer seated at another table that intervenes so that the gentleman can finish his meal.

One Look is All it Takes

Who among us has never done something they instantly regret but can’t take back? The ultimate paradox in the film is that it is his best friend who unintentionally betrays Jean. A Gestapo office bursts into the classroom demanding if anyone knows a boy by the name of Jean Kippelstein (Jean’s real name). The boys remain silent and just when the Gestapo officer is turning to leave, Julien shoots the briefest sideways glance of relief in the direction of his Jewish friend, unwittingly identifying him to the officer. 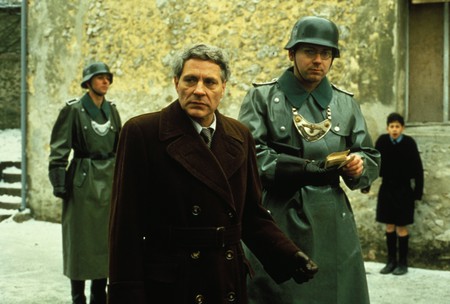 Julien learns that the informant who clued up the Nazi’s about the existence of the priest’s concealment of Jewish children was none other than the school’s disgruntled kitchen helper, who had been recently fired for selling precious food supplies in the black market. What makes some scenes of the film uncomfortable to watch is perhaps that it makes us question our own weakness, and what we would have done in a similar situation. Would we have been the heroic priest? The collaborator? Can we say for sure that we would have acted differently? It’s as if he’s speaking to us when the wretched kitchen helper, who reads the disappointment in Julien’s eyes, tells the shocked boy: “Don’t act so self-righteous, mate, it’s the war.” 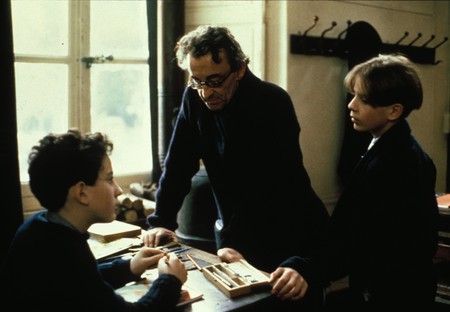 The Scene That Will Get You Reaching For the Tissues

Sneaking out of the bomb shelter during a raid, the two boys have the school to themselves. They play and laugh, and then during a quiet moment, Julien asks Jean about his parents and about being persecuted by the Nazis: “Are you ever scared” he asks. “All the time,” replies the young boy.

The Scene That Will Release the Floodgates

As the students are lined up in the school courtyard, the Gestapo officer denounces the priest’s actions, saying that French people are weak and undisciplined. Meanwhile, as the priest is led away by the officers he turns and calls out to the children, “Au revoir, les enfants!” and they respond: “Au revoir, mon père!” As they leave through the gates, Jean glances over towards Julien briefly. and he waves in return. 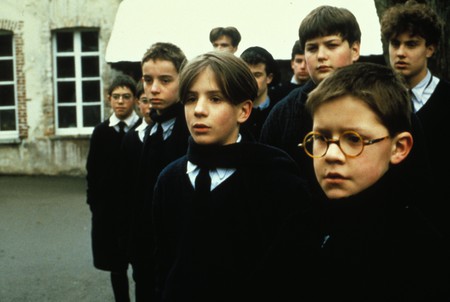 The Film is Based on a True Story

What makes this film even more emotional is that it is autobiographical. While in school as a young boy, writer and director Louis Malle witnessed three Jewish pupils and a Jewish teacher taken from his school by the Gestapo to be deported to Auschwitz. The film ends with the voiceover: “More than 40 years have passed, but I’ll remember every second of that January morning until the day I die.”

Au Revoir Les Enfants (1987) was restored on high-definition digital transfer and re-released on DVD and Blu-Ray by The Criterion Collection with English subtitles.