6 Spectacular Things to See & Do in La Cité, Carcassonne 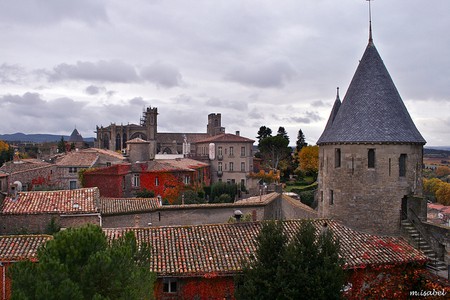 La Cité is the historic citadel of the fortified city of Carcassonne, located in the Aude-Languedoc-Roussillon region of Southern France. First founded a full 2,500 years ago, in the Gallo-Roman period, Carcassonne’s historical quarter takes its name from the two concentric wall of defense that surround it, forming a perimeter of about 3km strategically studded with 52 towers. In the entire European continent, La Cité of Carcassonne is the largest citadel with its walls still completely intact. Read on for our list of six must-see sites to visit when you’re exploring this fascinating piece of French history. 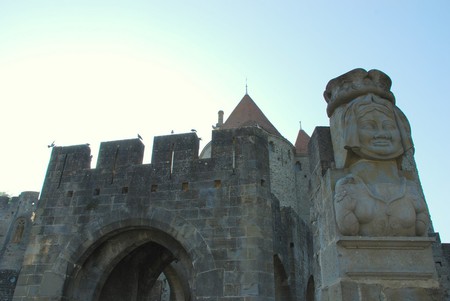 Bust of Dame Cascas at the entrance of the citadel | © Yellow.Cat/Flickr

This smiling face is the first thing you’ll see when you enter the Cité of Carcassonne, a bust replicating the 16th-century original (which is now kept in the Chateau Comtal). According to the colorful local legend, Dame Carcas was the inspiration for the naming of Carcassonne: she was a princess who lost her husband, then boldly led local troops in defending the citadel against Charlemagne. It’s said that the Dame’s strategic psychological tactics fooled the conquering forces and saved the citadel: after five years under siege, it’s said that the people of Carcassonne were so starved for resources that they nothing left to eat but wheat and a single pig. The story goes that Dame Carcas made a brilliant bluff, feeding the wheat to this last pig and then throwing it from the highest tower, in full view of the enemy. Seeing this, Charlemagne concluded that the siege must be failing if the citadel could afford to waste fattened livestock. He commanded his soldiers to retreat, and Dames Carcas was so overjoyed that she ordered the whole city to start ringing bells from every tower in celebration. One of the townsfolk exclaimed, “Carcas sonne,” or “Carcas rings,” and from that day on Carcassonne was the name of their home – all thanks to one brave and daring princess. 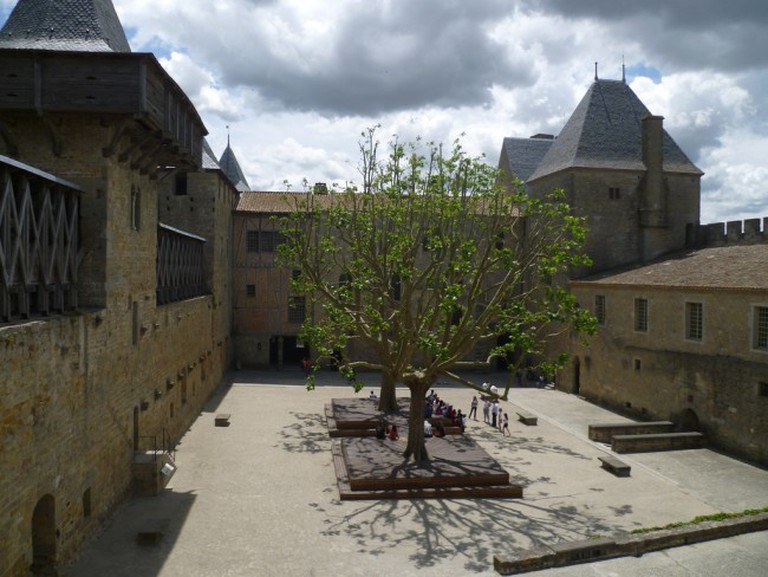 The inner courtyard of the castle of Carcassone | © Lisa Stevens/Flickr

The Portes of la Cité

The fortified walls of the Cité of Carcassone open to four cardinal entrances, or portes: Porte Narbonnaise, Porte Saint-Nazaire, Porte d’Aude, and Porte du Bourg (aka Porte de Rodez). To the east is Narbonnaise, composed of two reinforced towers and protected by a bludgeon and an arrow slit. This entrance was named for its position facing the city of Narbonne, and was also once the site of the Castle of Narbonnaise destroyed long ago. To the South is the Porte Saint-Nazaire, located to correspond with the nearby corner tower that carries the same name. This southern porte was designed for several defensive tactics to protect la Cité, such as a post for sentinels. On the western wall, the Porte d’Aude takes its name from the river that it faces, and is also the closest entrance to the Castle of the Counts. This porte is also equipped with a strong defensive system; if you look underneath the arches, you’ll see a number of false doors that lead to nowhere to confuse the enemy, as well as entryways that lure the enemy into trap corridors that force soldiers into vulnerable positions for internal attacks. Lastly, The Porte du Bourg (also called Porte de Rodez) is the Northern entrance to la Cité, and takes its name from its proximity to the ancient village of Saint-Vincent (bourg means village in French). This Porte is more modest and presents less instruments for defense.

The Théâtre de la Cité is an old open-air theater located at the heart of Carcassonne. In 2006 it was officially renamed the Théâtre Jean Deschamps, in honor of the famous French actor by the same name who performs in the Comédie-Française. Ever Summer this massive amphitheater comes alive as the host of Festival de la Cité, a popular performing arts festival which stages an exciting variety of music, dance, and classical drama. The festival brings in a mix of high-profile national and international performers around a central theme, and is getting bigger and bigger every year: 2015 was the 10th anniversary and saw the inauguration of a massive new stage which can accommodate over 10,000 performers. Audiences are growing as well; the 2014 festival drew in over 200,000 patrons to la Cité, making this a cultural event of truly epic proportions.

Basilica of St Nazaire and Celsus

The Basilica of St Nazaire and Celsus, a minor basilica designed in the Romanesque Gothic style, is recognized as a deeply historic French national monument. While the construction was still underway, this basilica was blessed by Pope Urban II during its visit to the city in 1096. The structure was officially completed in the 12th century, then renovated in the 13th century for a Gothic revamp. For many centuries, the Basilica of St Nazaire and Celsus operated as the central Cathedral for the whole city, until St Michel de Carcassonne acquired the title in 1803.

There are 22 wells strategically scattered across la Cité of Carcassone which were once used to provide precious water to the inhabitants of the citadel. The great well is not only the biggest, but it is also considered to be the oldest of them all. The base of this well dates back to the 14th century, while the columns and ironworks are products of the Renaissance. One legend attests that the well contains hidden treasure from the Temple of Salomon, buried there by the Visigoths when they were fearful of Attila’s arrival. Extensive excavations have produced no valuable findings, but hope springs eternal from this well’s intriguing history.