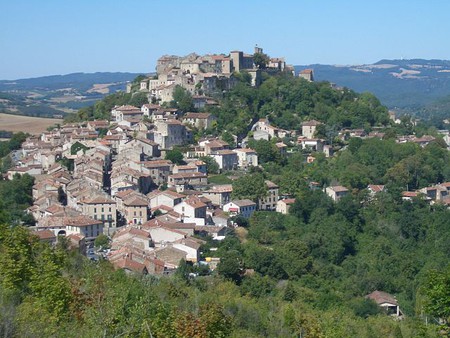 Known as France’s “Ville Rose”, Toulouse radiates an enchanting warmth. Tourists flock to this capital city of the Haute-Garonne region of southwestern France every year to take in its dusted-pink medieval architecture, its famous cassoulet (a stew-like dish with meat and beans), and the unbeatable balmy temperatures. If you’re in the city for a long enough spell, make sure to venture outside of town for at least a day to fully experience the Garonne region around you. From artists’ havens to historic abbeys to the actual birthplace of French wine, we’ve highlighted five magical towns you can see from Toulouse in a day. 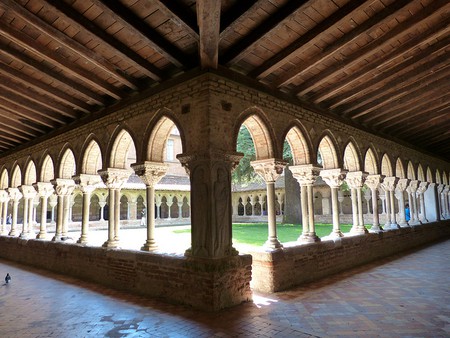 Less than an hour from Toulouse, at the confluence of the Tarn and Garonne Rivers in the Midi-Pyrénées region, the town of Moissac is known internationally for its Abbey of St. Pierre and its waterways. The Abbey dates back to the 11th century, when it originally served as a Benedictine monastery. Its ornate Romanesque sculpture, towering portico and tympanium are among several reasons the Abbey has been designated a World Heritage site of the pilgrimmage Routes de Santiago de Compostela. It’s also the current home of France’s Documentation Center of Roman Art. If that hasn’t intrigued you, the canal of the Tarn River runs right through the city center and is designed for picturesque promenades on foot, making for a fanciful exploration of the historic town.

Watch out for: the Abbey of St. Pierre and the canal promenade Just 50 km of Toulouse, a mere stone’s throw from Moissac, Montauban is a beautiful town steeped in history, featuring Roman fortifications and brick houses dusted in rose. Not too big, nor too small, Montauban is the perfect place to explore on a leisurely day in the Garonne region. Start by admiring the exquisite archways at the famed Place National, then wander down narrow streets that will lead you to a series of cafés, sweet boutiques, and a gorgeous 14th century bridge. Next pay a visit to the mosaic-clad 13th century St. Jean Cathedral, or the baroque style 18th century Cathedral of Notre Dame. For an extra dose of local culture, check out the Museum Ingres, which features an impressive collection of work from the renowned 19th century artist Jean-Auguste-Dominique Ingres, as well as sculpture by hometown hero Antoine Bourdelle.

Just an hour east of Toulouse, Gaillac is a stunning little town on the Tarn River. With great wine, animated local markets, and several important historical monuments in the city center, a leisurely stroll here can easily unfold into an all-day affair. Of particular note is St. Michel’s Abbey, perched along the river and architecturally immersed in layers of the town’s history, having seen major reconstruction in both the 13th and 16th centuries. The 17th century Chateau de Foucaud just outside the city center is also well worth a visit for a look at its immaculate gardens.

Climbing towards the sky, this medieval village will leave you breathless with its magnificent views of the Garonne. Cordes-sur-Ciel was one of the first fortified villages of Southwest France, and today it holds a veritable treasure trove of local art. From contemporary painting, pottery and sculpture to handmade jewelry, glassware, woodcarving, and artisanal leather, Corde-sur-Ciel houses an abundance of galleries and ateliers where dozens of skilled artists have chosen to set up shop. If you arrive on a Wednesday or Saturday, make sure to stock up on provisions at the colorful local market and enjoy a leisurely picnic in the Jardin des Paradis, a public park known for its mix of contemporary, oriental and medieval design. If you happen to be in the area between December and February, don’t miss the town’s annual truffle market, where harvesters come to sell their “black gold”.

What better place to drink French wine than at its historical source” The very first French vineyards are said to have been planted near Cahors in the first century by the Romans. The region is especially famous for its Black Wine which dates back to the Middle Ages, as well as its Malbec (though commonly thought to be originally Argentinian, Malbec grapes were in fact first cultivated in Cahors, and brought to Argentina as a gift in the mid 19th century). The area surrounding the city is teeming with vineyards that offer regular tastings, and sell their wine for much cheaper rates than you would find commercially. Cahors itself is as rich in history as its wine is rich in flavor, being one of the first cities conquered and occupied by the Romans. During your visit here, you can see some of this history incarnate in the famous 14th century Valentré Bridge and the St. Etienne Cathedral.