Independent publishing houses play a crucial role in the publishing industry, as they search for emerging talent and take a risk in promoting voices which do not easily fit the mass market. Boldly favoring long term creative ambitions over short term financial gain, independent publishers seek to create space for new writers. France has a lively creative culture which allows indie startups to flourish alongside traditional houses. If you are a writer or an avid reader make sure to check out these top five French independent publishers.

Passionate about diverse art and literature, Marion Mazauric, former literary director of J’ai Lu, founded Au Diable Vauvert in 2000, in Nîmes. For Mazauric, Au Diable Vauvert is an iconoclastic publishing house which is open to all genres and signifies ‘literary quality, modernity, nonconformity, accessibility, cheerfulness and the editorial promises.’ Over a period of 15 years, this company has published French fiction, foreign fiction, poetry and comic books and worked with many great French writers as well as international literary figures. Macadam a collection of short stories by Jean-Paul Didierlaurent; Porteur d’Âmes by Science Fiction writer, Pierre Bordage; Rainbow Warriors by thriller writer, Ayerdhal; Les Nouveaux Nouveaux Mystères de Paris by Cecile Vargaftig and translation of many works by Neil Gaiman and David Foster Wallace are among their standout publications.

After the split of Attila publishing into two publishing houses; Frédéric Martin, former editor of Vviane Hamy, and the maverick co-founder of Attila, launched Le Tripode in the summer of 2013. Frédéric Martin favors the sensibility of the artist and publishes any text that touches him enough to defend it. For him, publishing a book means defending a book, its strangeness and its uniqueness. Every year, Le Tripode, publishes over 20 books in various categories including French fiction, foreign fiction and illustrated books. Le Majestic by Robert Alexis, Vie? Ou Théâtre, a graphic novel by Charlotte Salomon, and the translation of L’Art de la Joie by Goliarda Sapienza, are among some exciting titles that you should definitely check out in their catalogue. Their newest work, Birds –a collection of drawings inspired by Rumi’s aphorisms– will be published in November 2016. 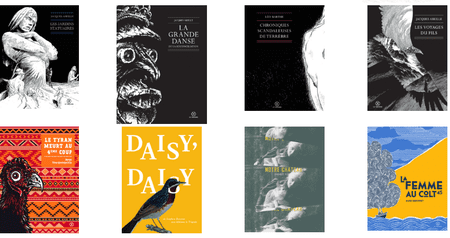 In 2013, Benoît Virot, former journalist, creator of Le Nouvel Attila magazine and the other co-founder of Attila publishing, launched his own independent publishing house Le Nouvel Attila. His desire to shake up the conformist publishing system and to find more books by marginalized writers in bookshops transformed him into an indie publisher. Despite the precarious economy, publishing rare and demanding titles is still one of their main objectives. Le Nouvel Attilla vociferously publishes manuscripts which amaze as well as amuse; including French fiction, foreign fiction, and graphic novels. Debout- Payé by Gauz; Farigoule Bastard by Benoît Vincnt; a translation of Comment élever votre Volkswagon, a graphic novel by Christopher Boucher, are among their outstanding publications. Le Nouvel Attila is also patron of Le Prix Nocturne; a French literary award which is held annually in autumn to select the most unusual works. 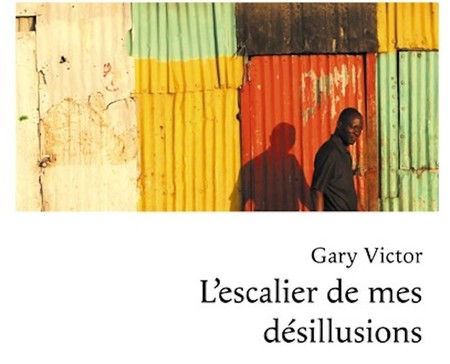 Philippe Rey was founded by the former editors of Stock, Philippe Rey and Christiane Besse, in 2002. Despite complexities and obstacles of the publishing industry, the encouragements of some of their writer friends like Joyce Carol Oates and Peter Ackroyd allowed them to expand their business. For Philippe Rey, a publishing house is like a tree which grows through different seasons and produces fruits. Apart from publishing books by well-known writers, their team eagerly paves the way for new voices as well. Their current catalogue consists of 250 titles including French fiction, foreign fiction, art books and essays. Since they prefer quality over quantity, only twenty to thirty new titles are added to their catalogue each year. A translation of Les Chutes by Joyce Carol Oates, Ça sera ma vie parfait by Camille de Villeneuve, L’escalier de mes disillusions by Gary Victor; and works by the former French Minister of Justice, Christiane Taubira, are their most remarkable achievements. 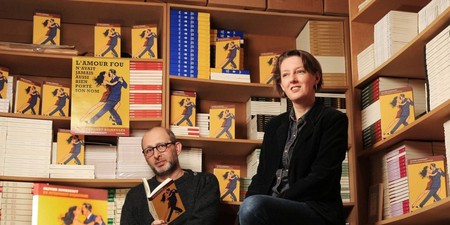 Éditions Finitude was founded by a bookseller couple, Emmanuelle and Thierry Boizet in 2002 in Bouscat. After their graduation, the couple opened a bookshop in Bordeaux and started their publishing business with publication of several texts found in old magazines and Jean Forton’s unpublished works. The couple believes that indie publishers must primarily privilege art and their passions must be their guide rather than commercial concerns. Every year, around seven new titles are added to their current catalogue which contains French fiction, foreign fiction, essays, collection of short stories and old literary texts. En Attendant Bojangles by Olivier Bourdeaut; Saint Rita: Patronnes des Causes Désespérés, a collection of short stories by Claire Wolniewicz, and Ma Nuit entres tes Cils by Grégory Cingal are among their contemporary standouts. 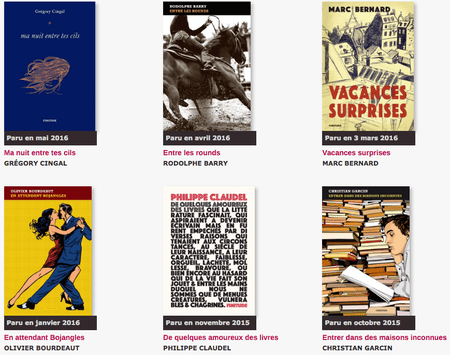 Courtesy of Editions Finitude
Give us feedback