The terrace at La Villa Archange | © La Villa Archange
The French Riviera is well-known for its lavish lifestyles and culinary delights. So it’s no surprise that the region is crammed with restaurants that often top the ‘Best Restaurants in the World’ list. Here’s 12 of the best fine dining restaurants which range from simple organic to avant-garde.

Hotel
The dining room at Hostellerie Jérôme | © Hostellerie Jérôme
The Hostellerie Jérôme has two Michelin stars and is based in La Turbie overlooking Monte Carlo. Looking after both a café and a restaurant, the chef Bruno Cironi does haute-cuisine with a local, market twist. Using seasonal produce he creates simple, classy dishes, like roast pork and courgette flowers. The basic menu is €78 and the big menu is €138. Open for dinner only. 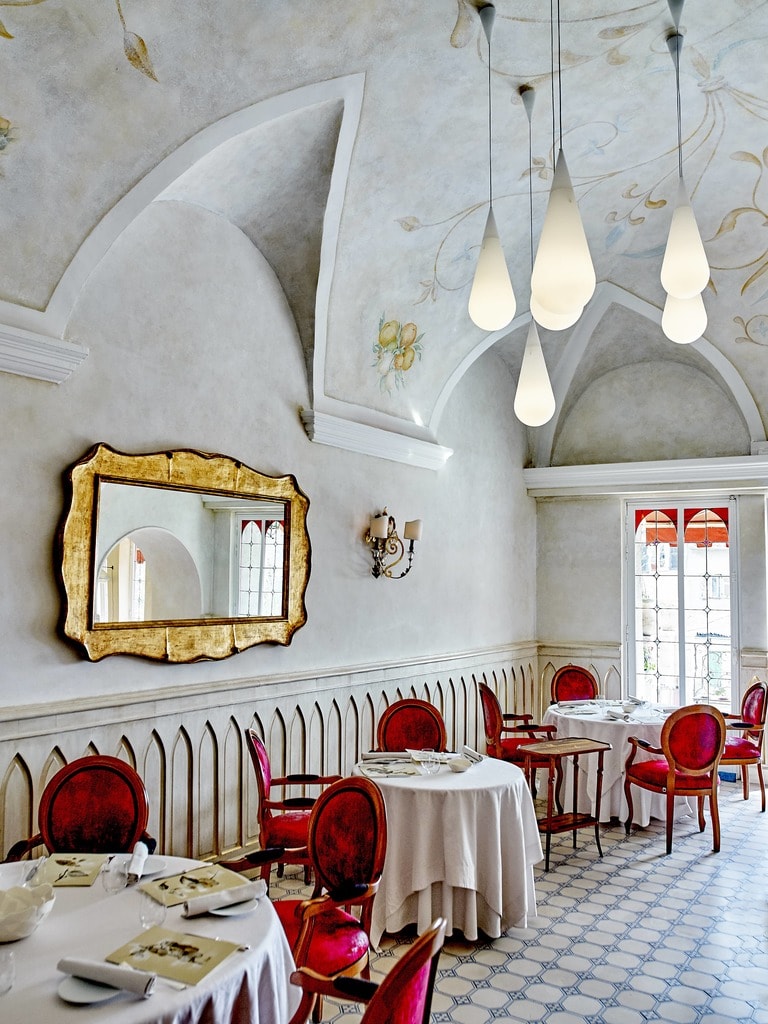 Restaurant, French, Mediterranean, European, Vegetarian, Vegan
The Restaurant Parc 45 has one Michelin star and is inside the 1960s Grand Hotel on the famous Croisette boulevard in Cannes. It has a bar, Le Cercle, where people have an “apéritif” (pre-dinner drink) before moving onto the main event. Under the chef, Sébastien Broda, this is a place for inventive dining – think smoked salmon blancmange or croutons with seaweed and curry. Come for the food and stay for the views on the terrace.
Permanently closed
More Info
Open In Google Maps
45 Boulevard de la Croisette, Cannes, Provence-Alpes-Côte d'Azur, 6400, France
+33493381545
View menu
Visit website
Visit Facebook page
Send an Email
Give us feedback

Restaurant, Bar, French, Mediterranean, European, Vegetarian
Saint-Tropez Seafood | © Jos Dielis/Flickr
St Tropez has two Michelin-starred restaurants of which Le Vague D’Or is one (the other is Le Louis XV). Le Vague D’Or literally means ‘the golden wave’ in English and people love this place; it has three Michelin stars. It’s on the water’s edge in one of the few small beaches to be found in this very chic village, so the views are sublime. Food is very Mediterranean in its origins, as you’d expect, like turbot in a Camargue sea-salt crust with shellfish and rock samphire. The chef, Arnaud Donckele, was the youngest person to ever receive three Michelin stars. Like everywhere in St Tropez, you’ll need deep pockets (the menus start at €200) but this place is so beloved that you’ll probably feel the same way. It’s only open in the summer months from May to the beginning of October.
More Info
Open In Google Maps
Saint-Tropez, Provence-Alpes-Côte d'Azur, 83990, France
+33494559100
View menu
Visit website
Visit Facebook page
Send an Email
Give us feedback

Restaurant, French, Mediterranean, Vegetarian, $$$
La Carte Blanche in Hyères is fine dining but in a cosy, little restaurant that serves simple food at more affordable prices than some other fine dining places in the region. It gets rave reviews for its fresh pasta and simple, seasonal dishes. The menu changes according to the season and the welcome is warm and convivial.
Permanently closed
More Info
Open In Google Maps
3 Rue des Porches, Hyères, Provence-Alpes-Côte d'Azur, 83400, France
+33494235156
View menu
Visit website
Visit Facebook page
Send an Email
Give us feedback

Restaurant, Market, French, European, $$$
A yummy dinner at Chez Fonfon | © Chez Fonfon
Chez Fonfon is an institution in Marseille. Situated in Vallon des Auffes, a little harbour that was founded by Italian fishing families in the 18th century, it’s tucked away in a picture-perfect bay just minutes from the city centre. 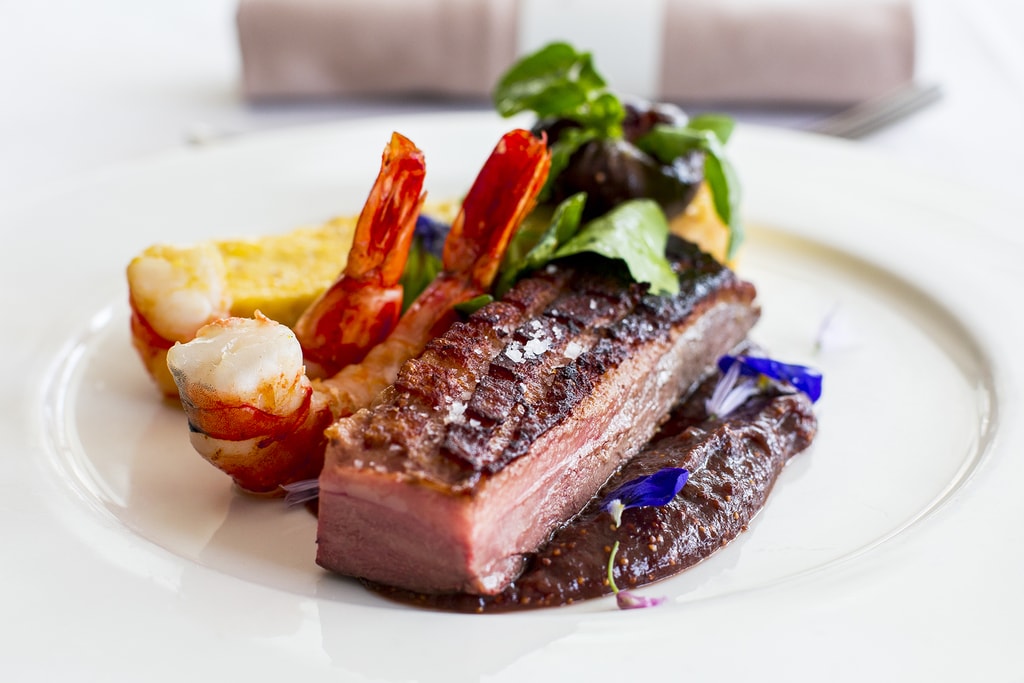 Surrounded by traditional fishing boats, you can try a wide range of fresh fish and the local specialty, bouillabaisse, fish stew. If you want the bouillabaisse, you’ll have to order 24-48 hours in advance. 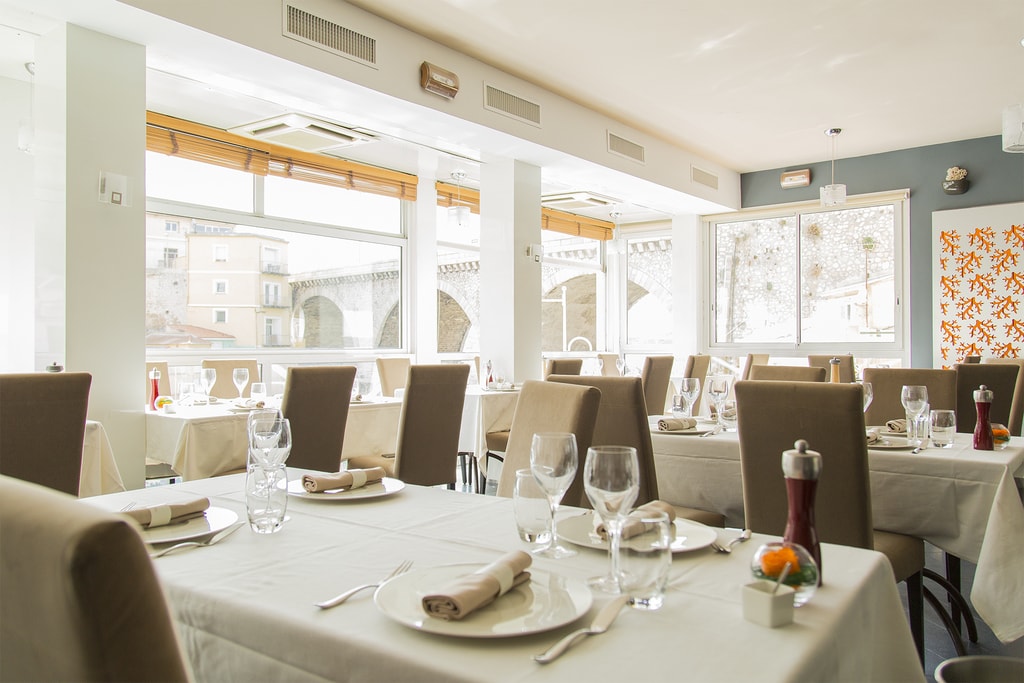 Hotel, Villa, $$$
Dine at Le Petit Nice Passedat’s three-Michelin-star restaurant | Courtesy of Le Petit Nice Passedat / Hotels.com
People adore Le Petit Nice in Marseille as much for the view as for the food. This hotel sits on an outcrop facing over the sea on the Corniche Kennedy, the road that runs along Marseille’s seafront. The views are great, particularly at sunset, because its situation means that almost every table faces onto the sea. The business has been in the same family since 1917 – when the current chef and owner bought the villa. The hotel/restaurant got its first star in 1977, its second in 1981 and its third in 2008. The vibe is intimate and elegant chic rather than showy and over-the-top. It specialises in the local fish stew, bouillabaisse, and other Mediterranean delights.
Hotel Amenities
Free Wifi
Restaurant
Bar
Swimming pool
Hot tub
Pet Friendly
Business facilities
Crib
Childcare
More Info
Open In Google Maps
17 Rue des Braves, Marseille, Provence-Alpes-Côte d'Azur, 13007, France
+33491592592
View menu
Visit website
Visit Facebook page
Send an Email
Give us feedback

Restaurant, French, Mediterranean, European, $$$
Daniel Desavie trained for 23 years at the famous French restaurant Moulins de Mougins, before branching out on his own, near the village of Mougins. The restaurant is full of Provençal touches, from the decor to the food. His wife welcomes everyone enthusiastically and speaks perfect English. Try the refined menu of lobster with tabbouleh and orange-mango vinaigrette and if you want to add a special touch to the very reasonably priced menu, you can ask the sommelier for a good wine recommendation. Closed Sundays and Mondays.
More Info
Open In Google Maps
1360 Route d'Antibes, Valbonne, 6560, France
+330493122968
View menu
Visit website
Visit Facebook page
Send an Email
Give us feedback

Restaurant, Seafood, French, Mediterranean, European, $$$
Ewan and Caroline Scutcher got married in Port Grimaud (just outside St Tropez) 30 years ago and set up their restaurant upon the water’s edge. This is unstuffy fine-dining, noted as one of the best restaurants on the French Riviera by its clientele (rock stars, Leonardo DiCaprio, royalty, etc.) offering fresh fish, lobsters and the like in a very relaxed atmosphere. They serve lunch on market days in the summer (Thursdays and Sundays) for €28 for a three-course menu. Traffic can be a problem in Port Grimaud, so when you reserve ask for a water taxi reservation too.
Permanently closed
More Info
Open In Google Maps
10-11 Rue des Artisans, Grimaud, Provence-Alpes-Côte d'Azur, 83310, France
+33494560677
View menu
Visit website
Visit Facebook page
Send an Email
Give us feedback

Restaurant, French, Argentina, Mediterranean, European, Vegetarian, $$$
The restaurant Mirazur has been ranked as the 11th best fine dining restaurant in the world. On the border between France and Italy, the Argentinian-Italian chef, Mauro Colagreco, makes avant-garde food that consistently wows the critics and his loyal clients. It has two Michelin stars, borders the sea and overlooks a tropical garden. Colagreco is one of a new wave of chefs where each plate has its own style with a specific palette and colour. Menus start at €85 or €55 for lunch on weekdays.
Permanently closed
More Info
Open In Google Maps
30 Avenue Aristide Briand, Menton, Provence-Alpes-Côte d'Azur, 6500, France
+33492418686
View menu
Visit website
Visit Facebook page
Send an Email
Give us feedback

Restaurant, French, Mediterranean, European, Vegetarian
You’ll find this restaurant, La Villa Archange, in the most unassuming place, in a residential area in Cannes but once inside you’re surrounded by gardens and lush vegetation. Regulars think the food is sumptuous; think veal shank slow-cooked for 24 hours and served with slightly salted mashed potatoes, or sea bass with lemongrass, king prawn tartar and coriander. 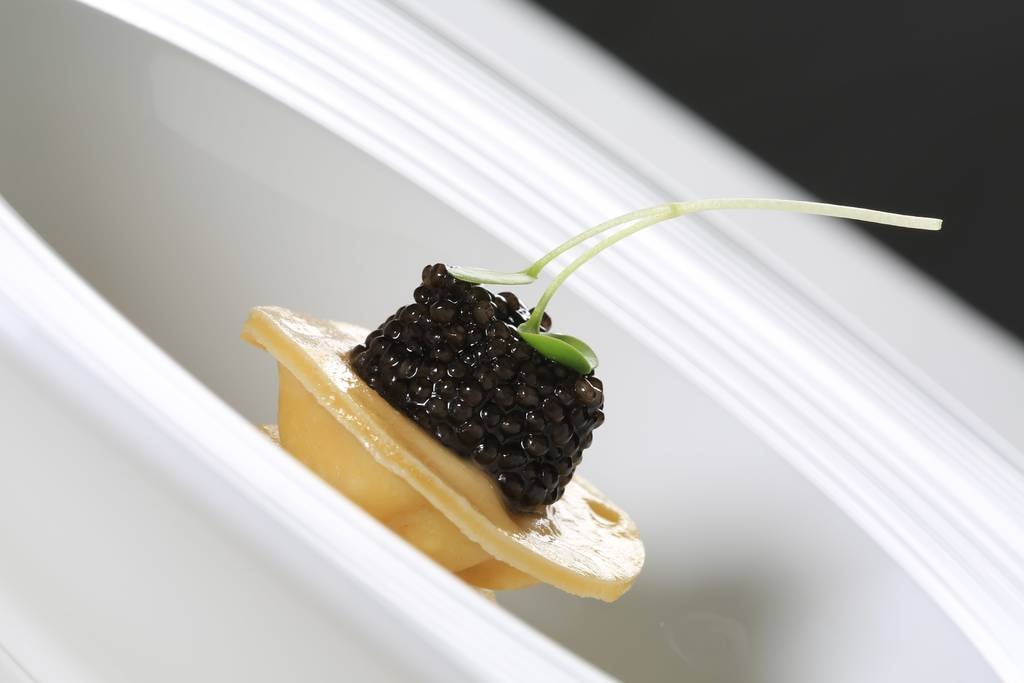 It’s frequented by celebrities and foodies. The daily special has its own app and a price tag to match but regulars think it’s worth it. If the menus (ranging from €110 to €240) are too much, you can eat in the next-door Bistro des Anges for a much more reasonable €31 for the express menu, which is run by the same team. Foodie heaven. 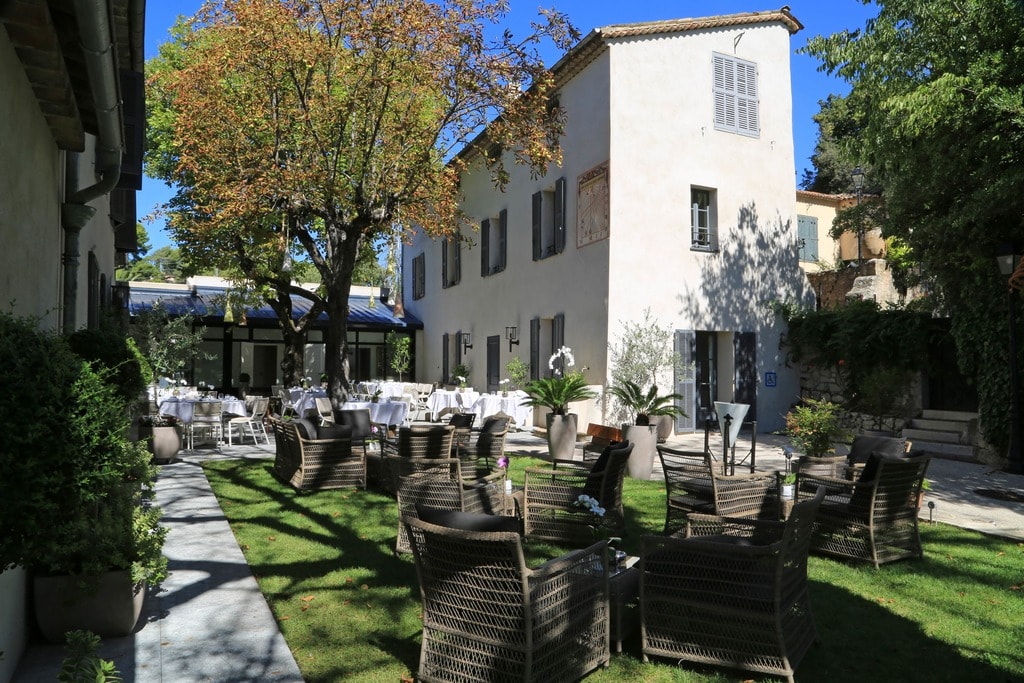 Restaurant, French, Italian, European, Vegetarian
Le Serre isn’t like the others on the list. It’s a family-run restaurant, which is legendary for great pizza and for Daube, the Provençal beef-and-wine stew with herbs. The chef begins preparing it at midnight and leaves it cooking all night to serve the next day. You’ll consistently find lots of locals in here, keen to avoid the many tourist traps on the French Riviera.
Permanently closed
More Info
Open In Google Maps
16 Rue de May, Villefranche-sur-Mer, Provence-Alpes-Côte d'Azur, 6230, France
+33493767991
View menu
Visit website
Visit Facebook page
Send an Email
Give us feedback

Restaurant, French, European, Gluten-free
Le Figuier de Saint-Esprit in the Old Town of Antibes has one Michelin star and is helmed by chef Christian Morrisset in a contemporary setting of wooden tables under a vine canopy and a 40-year-old fig tree (hence the name Figuier). It’s much cheaper at lunchtime (€40 for a two-course meal) but prices rise in the evenings, when you might find a wine for €3,000 on the wine list. The focus is on local ingredients like Alpilles lamb with gnocchi and truffles.
Permanently closed
More Info
Open In Google Maps
14 Rue du Saint-Esprit, Antibes, Provence-Alpes-Côte d'Azur, 6600, France
+33493345012
View menu
Visit website
Visit Facebook page
Send an Email
Give us feedback