11 of the Most Impressive Buildings in Bordeaux

11 of the Most Impressive Buildings in Bordeaux

The Opéra National de Bordeaux-Grand Théâtre enlighted at night/© Campus France for Flickr
When you arrive in Bordeaux, one of the first things you notice is the amazing and well-preserved architecture of the buildings throughout the city. They stand tall and majestic and give the city its majestuous aspect. Here are some of the most impressive buildings you’ll come across during your visit to Bordeaux.

Building, Cathedral
Just a few steps away from the Saint André Cathedral, the Palais Rohan is a palace built in 1771 in honor of Bordeaux’s archbishop, Fernand Maximilien Mériadec de Rohan. During World War II, the Palais Rohan was completely destroyed but later rebuilt. Since 1835, it has hosted Bordeaux’s mayor and city hall offices.You can admire the perfectly balanced structure of this Neoclassical building from the Place Pey-Berland.
More Info
Open In Google Maps
Place Pey Berland, Bordeaux, Nouvelle-Aquitaine, 33000, France
+33556102030
View menu
Visit website
Visit Facebook page
Send an Email
Give us feedback

Train Station
If you decide to take a day trip to the seaside or visit the nearby cities, you’re sure to have a pleasant start to your trip at Gare de Bordeaux St-Jean. Built in the 19th century, the Gare Saint Jean train station is a grand mix between ancient and modern architecture. It has a huge departure hall and its marvelous glass roof (made by Gustave Eiffel) is the biggest in Europe. It recently underwent a large renovation, in order to rehabilitate and modernize the Belcier area, at the back of the station. Since December 1984, the Gare Saint Jean is recognized as a Monument Historique.
More Info
Open In Google Maps
Rue Charles Domercq, Bordeaux, Nouvelle-Aquitaine, 33800, France
View menu
Visit website
Visit Facebook page
Send an Email
Give us feedback

Building, Theater
This majestic building is at the heart of Bordeaux’s cultural life. Stand in awe of the 12 colossal columns and statues of its portico and admire its unwavering beauty. Excellently preserved since its construction in 1780, the Opéra National de Bordeaux-Grand Théâtre perfectly embodies the Neoclassical influence you will surely spot throughout the city.
Permanently closed
More Info
Open In Google Maps
Place de la Comédie, Bordeaux, Nouvelle-Aquitaine, 33000, France
+33556008595
View menu
Visit website
Visit Facebook page
Send an Email
Give us feedback

Historical Landmark, Architectural Landmark
The Porte Cailhau is proof of the city’s effort to preserve its monuments. Built in 1494, this 35-meter (115-foot) high building is one of the city’s gates. It commemorates King Charles VII’s victory over the Italians at Fornoue. If you decide to go all the way up to the top, you’ll get to see an exhibition showing the tools that were used to build some parts of Bordeaux. Besides, the sublime panorama of the docks is reason alone to visit this defensive gate from the Middle Ages.
More Info
Open In Google Maps
Place du Palais, Bordeaux, Nouvelle-Aquitaine, 33000, France
+33556006600
View menu
Visit website
Visit Facebook page
Send an Email
Give us feedback

Historical Landmark
This massive, concrete building was constructed by the Italian navy in 1939 during World War II within the German occupation zone. This gigantic bunker has eleven alveolus linked by an internal street. Since the end of the war, the Base Sous-Marine has welcomed a variety of activities and events. Nowadays, it has become a cultural emblem of the Bassins à Flot neighborhood.
More Info
Open In Google Maps
284 Boulevard Alfred Daney, Bordeaux, Nouvelle-Aquitaine, 33300, France
+33556111150
View menu
Visit website
Visit Facebook page
Send an Email
Give us feedback

La Cité du Vin (City of Wine) was conceived by architects from the XTU agency in collaboration with the British agency Casson Mann Limited. The futuristic edifice, with its tower reaching 55 meters (181 feet), is the world’s largest wine museum. Take a walk around, join a wine tasting or workshop, or take a moment to relax in La Cité du Vin’s library.

School, University
La Place de la Victoire is praised by locals and tourists alike thanks to its vibrant atmosphere and numerous bars and restaurants. You can see several important monuments at this square. Usually, l’Obélisque, the 2005 sculpture from Hugues Martin, and the two turtles created by Ivan Theimer catch visitors’ eyes right away. However, many are intrigued by the large building slightly to the side of the Place de la Victoire – Université de Bordeaux’s Faculté de Médecine (Medicine Faculty). It first opened in 1888 and has a typical Beaux-Arts design. The edifice architect integrated new techniques with modern materials of the time, which is why it has such a unique look.
Permanently closed
More Info
Open In Google Maps
3ter Place de la Victoire, Bordeaux, Nouvelle-Aquitaine, 33000, France
+33557571864
View menu
Visit website
Visit Facebook page
Send an Email
Give us feedback

Architectural Landmark, Historical Landmark
You should definitively stop by La Grosse Cloche during your time in Bordeaux. It is one of the most visited attractionsand a true symbol of the town. Located in the middle of the Cours Victor Hugo, right in the center of the Vieux Bordeaux (Old Town), it used to be the “tempo of the city.” Along with the Porte Cailhau, it is the only monument dating back to the Middle Ages. This massive bell tower, standing 40 meters (132 feet) high, will delight architecture and history lovers alike.
More Info
Open In Google Maps
45 Rue Saint-James, Bordeaux, Nouvelle-Aquitaine, 33000, France
+33556006600
View menu
Visit website
Visit Facebook page
Send an Email
Give us feedback

Museum
The Musée National des Douanes (Customs Museum) is a national museum situated in the magnificent Place de la Bourse, and is dedicated to the history of French customs. Built in the 18th century in a Classic style, it originally operated for the customs department of the king and only became a museum in 1984. It also hosts the inter-regional main office of customs in Bordeaux and is classified as a Monument Historique, thanks to its beautiful façades, its court, and wooden décor in the former salon.
More Info
Open In Google Maps
1 Place de la Bourse, Bordeaux, Nouvelle-Aquitaine, 33000, France
+33970275766
View menu
Visit website
Visit Facebook page
Send an Email
Give us feedback

The Fort du Hâ is a former fortress close to the Palais de Justice and the École Nationale de la Magistrature. It was built right after King Charles VII’s army won the Bataille de Castillon against the British. It served different purposes over the years, such as a tribunal, and a political prison during World War II. Its two towers were listed as Monuments Historiques in 1965. 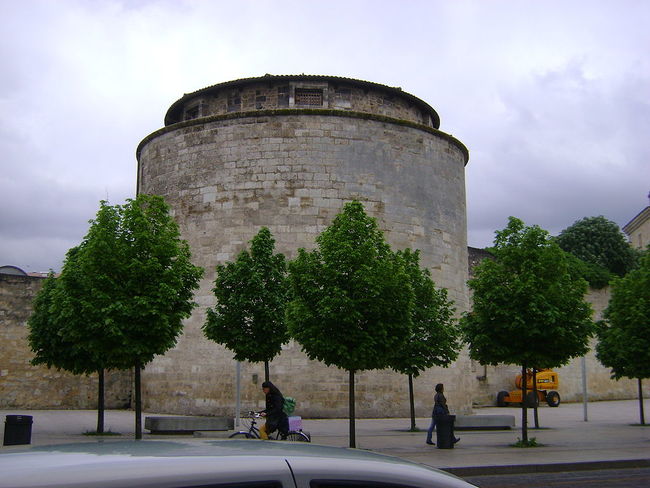