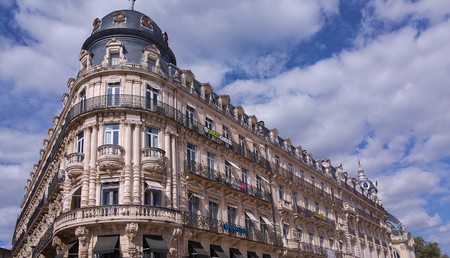 Montpellier hosts the most delightful collection of buildings you can imagine. Ornate, Renaissance facades sit happily next to modern glass structures from some of the century’s hottest architects. Here are Culture Trip’s favourite 11 beautiful buildings.

This beautiful water tower was built in 1768 by Henri Pitot. It was constructed to distribute drinking water from the source of the River Lez and is fed by the 14 kilometers long Saint Clément aqueduct. The water sits at the end of the equally beautiful Promenade du Peyrou, the expansive esplanade that runs all the way from Montpellier’s very own Arc De Triomphe (featured below) to the start of the aqueduct. 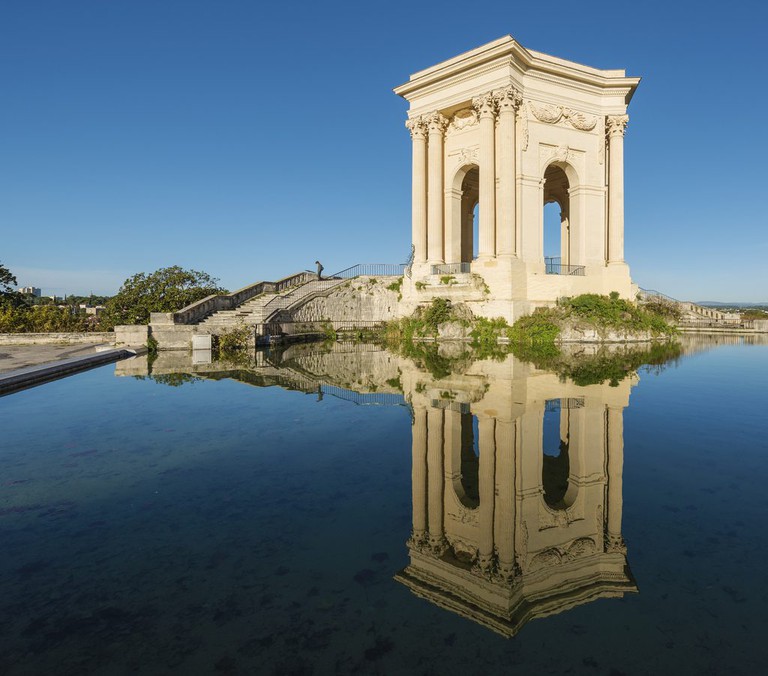 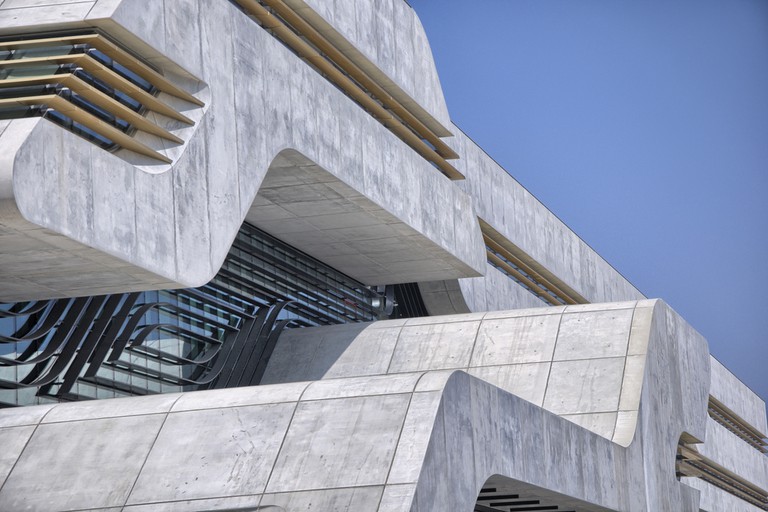 Pierres Vives Building | © Marc Meynadier / Flickr
This impressive concrete and glass building is the work of world-renowned Anglo-Iraqi architect Zaha Hadid. It was completed in 2012 and is home to a three of Montepllier’s administrative branches: a library, public archive and sports department. Located to the west of the historic centre, Pierres Vives is a contemporary vision for contemporary architecture in France’s fastest growing city.
Open In Google Maps
907 Rue du Professeur Blayac, Montpellier, Occitanie, 34080, France
+33467030000
Visit Website
Give us feedback 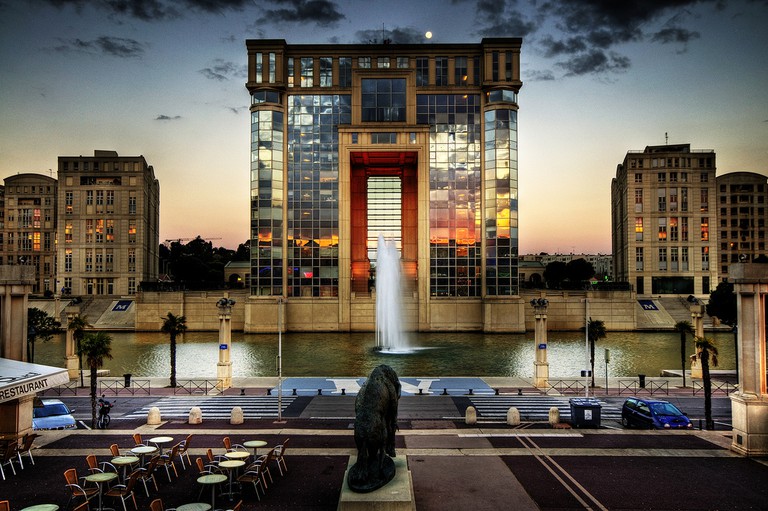 Hôtel de Région | © Wolfgang Staudt / Flickr
At the end of the Antigone on the River Lez district stands this impressive administrative building, completed in 1989. It was designed as glass-clad triumphal arch, a nod to historic architectural forms as well as proudly displaying its modern materials. It is the regional government building, the seat of Government. At the certain times of the day this building positively shimmers.
Open In Google Maps
Avenue de la Pompignane, Montpellier, Occitanie, 34000, France
+33467228000
Visit Website
Give us feedback

This alluring theatre was built as an ‘eco-project’, which except for the supportive foundations is a completely movable structure. The wooden diamond mesh on the exterior gives it its design edge, as the building is a simple square structure underneath. This playful project was all about using and manipulating the potential of prefabrication in construction and therefore reducing the environmental impact that a traditional build would have. 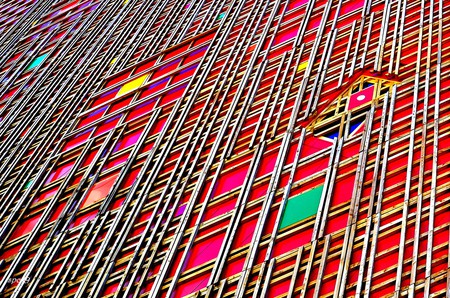 Montepllier has its very own Arc De Triomphe and it is easily one of the most beautiful buildings in Montepellier. Contact the tourist office for access to ascend to the top; the views are incredible from here. 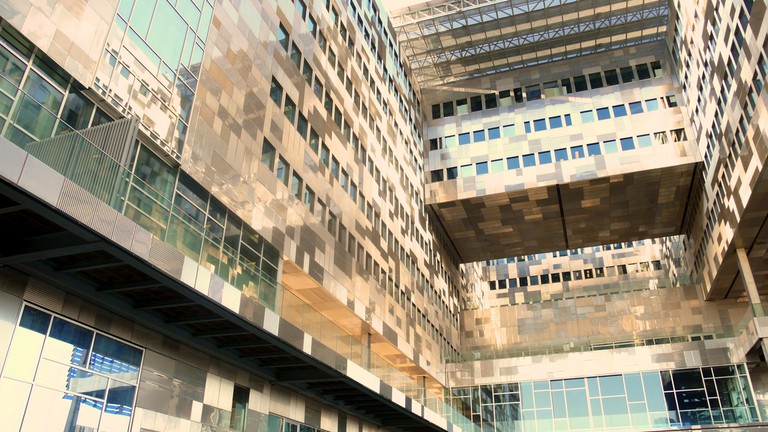 Hôtel de Ville | © Jean-Baptiste Maurice / Flickr
Located in the Port Marianne district in the south of the city, Montpellier’s new Hôtel de Ville is quite dazzling. The architects of the build that finished in 2011 – Jean Nouvel and François Fontès – wanted to created an open and luminous feel to a building of this size. The gigantic blue glass and metal monolith structure is seen by many as a pinnacle of rebirth and development in Montpellier.
Open In Google Maps
1 Place Georges Frêche, Montpellier, Occitanie, 34000, France
+33467347000
Visit Website
Give us feedback 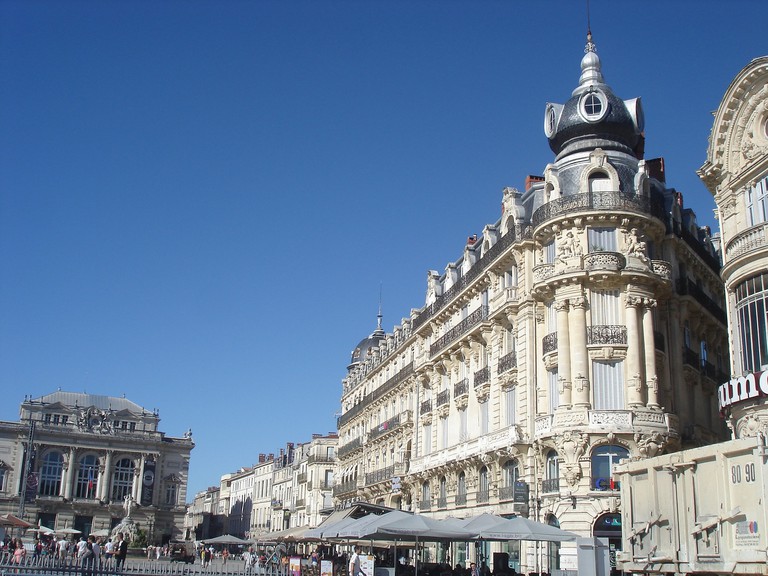 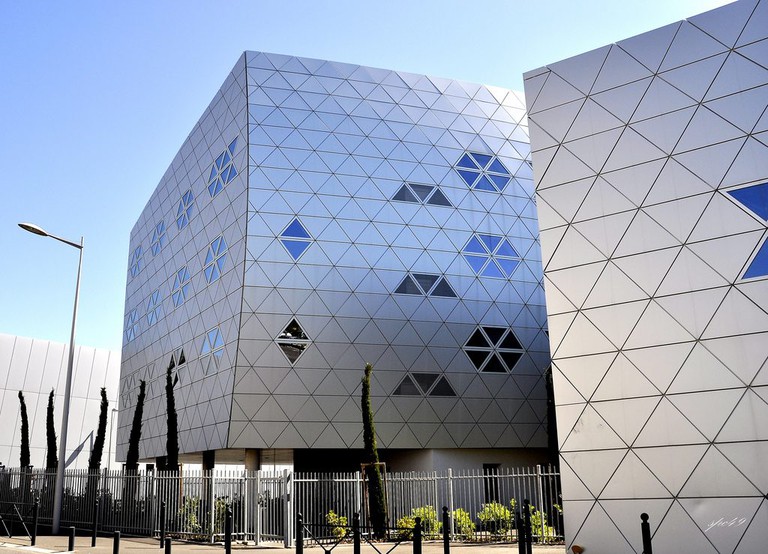 Georges Freche School | © Sabin Paul Croce / Flickr
Designed by Italian architect Massimiliano Fuksas, Lycée Georges Freche is a complex structure, with fluid white curves, geometric windows and footbridges connecting two main buildings. It is a little out of the central part of Montpellier, however it is worth the trip – especially on a weekend when it is quieter. Take the tram line and alight at Millénaire.
Open In Google Maps
401 Rue Le Titien, Montpellier, Occitanie, 34000, France
+33467130505
Visit Website
Give us feedback 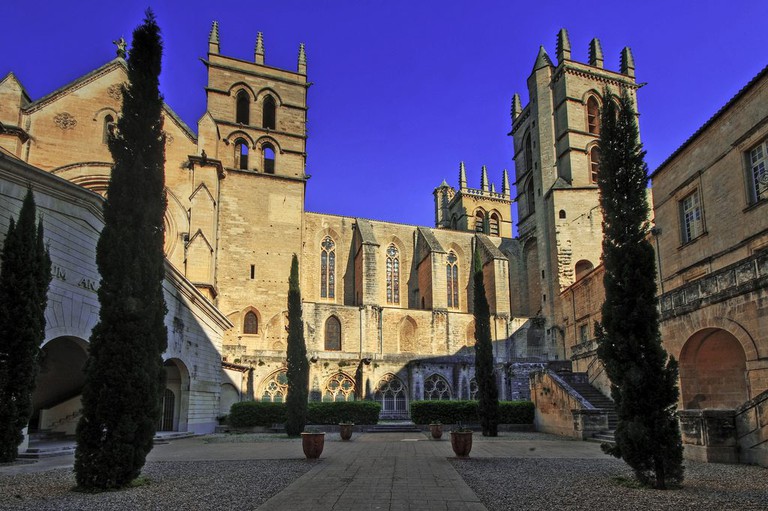 Montpellier Cathedral | © Wolfgang Staudt / Flickr
Montpellier’s Cathédrale St-Pierre was commissioned by Pope Urban V in 1364 and was converted into a cathedral in 1536 when the archbishopric was transferred from Maguelone to Montpellier. The Faculty of Medicine, housed in the former cloister of the monastery of Saint-Benoît, lies adjacent.
Open In Google Maps
Rue Saint-Pierre, Montpellier, Occitanie, 34000, France
+33467660412
Visit Website
Give us feedback

For neo-classical architecture at its best, head to the Antigone district of Montpellier. Designed by Catalonian architect, Ricardo Bofill, Antigone covers 36 hectares of what was once army barracks. Established in the 1970s, the wide avenues, large squares and the futuristic-style buildings are still surprising to the eye. The Place du Nombre D’Or is particularly delighful on the eye. 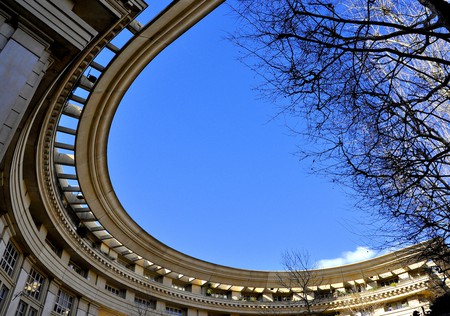 La Grande Motte is the closest pocket of coastline from Montpellier and an interesting destination if you’re interested in architecture. The architect of the whole project, Jean Balladur, created a collection of buildings that still stand the test of time today – even though they were built in and around the 1970s. He was influenced in shape by Pyramids and modernist architecture. 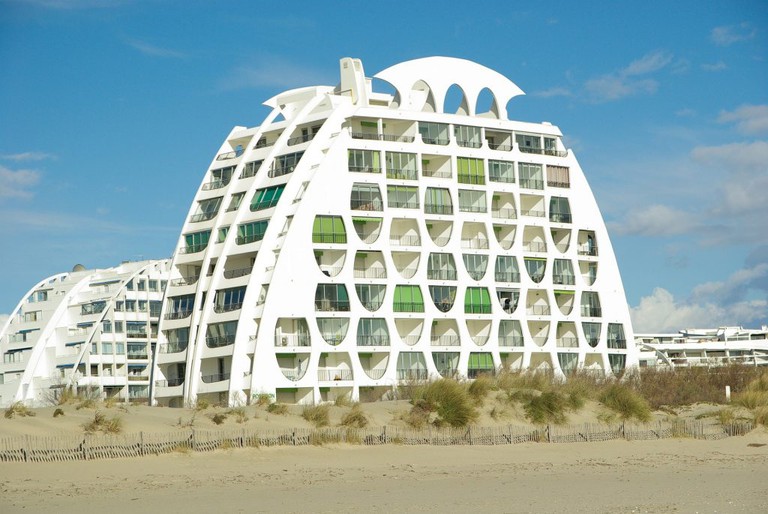