10 Works By Delacroix You Should Know 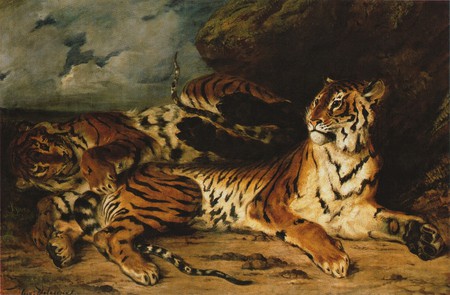 Delacroix is considered as the most important of French Romantic painters. His paintings are characterized by drama, frenetic movement and their often gigantic forms. It’s hard not to be awed by their sheer size. Delacroix also had a big impact on future generations of artists, with his fluid brushstrokes and light and shade effects influencing the Impressionists and his interest in the exotic driving the Symbolists. He was a highly prolific painter, completing 9,140 pieces including paintings, pastels, watercolors and drawings. Discover the gripping stories behind Delacroix’s key works and impress your companions on your next art tour.

The Barque of Dante

The Barque of Dante was 24-year-old Delacroix’s first work exhibited in public at the infamous Salon. It portrays a scene from Hell from Dante’s Divine Comedy where Dante, with the Roman poet Virgil, cross a lake where the souls of the damned writhe in agony. Importantly, this painting broke with Neoclassical conventions to start the Romantic movement, establishing Delacroix as its natural leader. Whether it’s the horrified faces of the visitors, the anguish of the eternally damned or the agitated movement, this sense of drama and mystery was a novelty at the time. As a result, the picture provoked a lively debate. 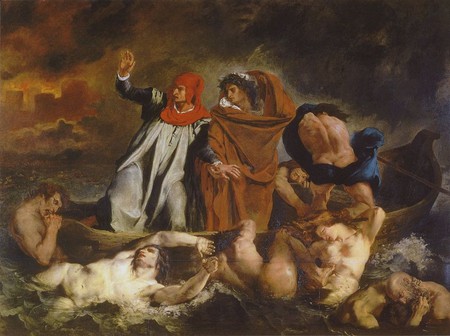 The Barque Of Dante

Liberty Leading the People, showing Liberty personified as a woman and leading the people onto the barricades in the 1830 Parisian revolt, is Delacroix’s most recognized painting. It was met with uproar, and although the state promptly bought it, it was only exhibited 16 years later, after the 1848 Revolution when the newly elected Napoleon III allowed the painting to be displayed. Delacroix, a member of the National Guard, has a cameo role in the painting as the man on the left in the top hat. Look out for Liberty’s hairy armpit which set tongues wagging at its unveiling.

Greece on the Ruins of Missolonghi

Greece on the Ruins of Missolonghi is Delacroix’s second painting in support of the Greeks in the War of Independence from the Ottoman Empire. The Greeks’ struggle was a popular cause, with support from many artists and intellectuals across Europe. The image portrays a tragic episode from 1825 when the Greeks preferred to destroy their city and commit suicide rather than to surrender. Greece is shown symbolically as a woman, dressed in traditional costume, with the tragedy enfolding at her feet. The figure recalls the Virgin Mary standing over Jesus’ body. The event was of personal importance for Delacroix as Byron, whose work he admired greatly and who provided inspiration for his own work, died nearby. 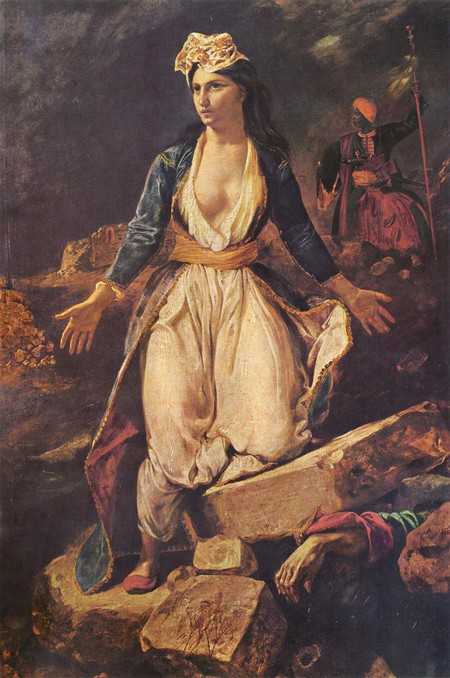 Greece Expiring On The Ruins of Missolonghi

The Death of Sardanapalus

The Death of Sardanapalus is considered to be Delacroix’ Romantic masterpiece, inspired by another Byron poem. It depicts the vanquished last Assyrian king, Sardanapalus, who orders the killing and destruction of all that he held dear: his concubines, servants, animals and treasures, before killing himself. Its standout features are the sheer size of the work, the dramatic colors, violent movement and the play of the light, which directs the viewers’ attention. Art critics at the time commented on his use of shortened perspective and the unusual diagonal composition. Although the subject may inspire horror, it’s difficult not to be captivated by the unfolding drama and its minutiae details.

The Death Of Sardanapalus

Combat Of The Giaour And The Pasha

Combat Of The Giaour And The Pasha continues the Oriental theme. It is another painting to be inspired by Byron – his tale of an ill-fated love affair between a Venetian, the Giaour or adulterer in the Ottoman Empire, and the slave Leila, belonging to the Turkish military leader, the Pasha. For her disloyalty, Leila is thrown into the sea while her lover avenges her death by killing the Pasha. The painting is one of several on this topic. It highlights Delacroix’s skill and mastery in capturing close combat scenes where men and animals are closely entwined. 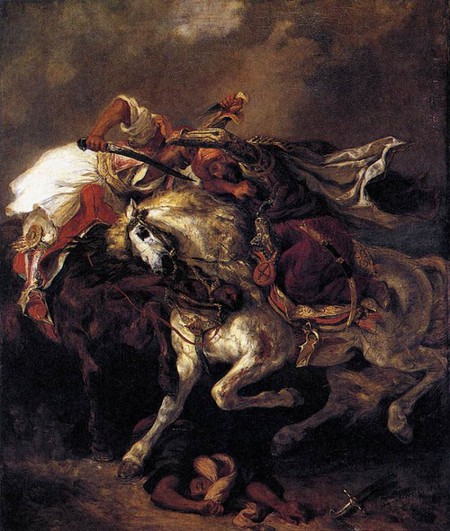 Combat Of The Giaour And The Pasha

Entry of the Crusaders in Constantinople

Delacroix, like other 19th century painters, was also interested in big historical events. Entry of the Crusaders in Constantinople depicts the infamous Fourth Crusade, where the crusaders led by the blind Venetian doge, Dandolo, abandoned their aim of reclaiming Jerusalem and instead sacked Christian Constantinople, modern-day Istanbul. On the painting, the victors enter the city whose inhabitants beg for mercy among the death and destruction. The carnage in the foreground is contrasted with the bright blue waters and sky in the background. 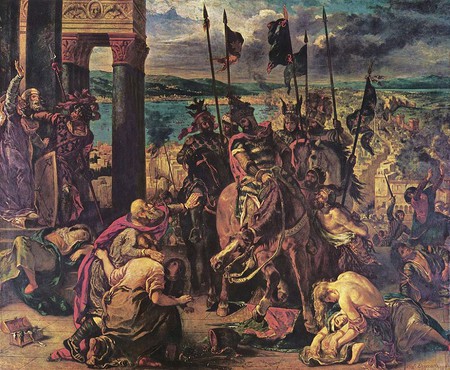 Entry Of The Crusaders In Constantinople

Orphan Girl At The Cemetery

Orphan Girl At The Cemetery was thought to be a preparatory work for Massacre at Chios – Delacroix’ second work which supports the Greek struggle for independence – but is actually a great piece in itself. Looking at the painting, the sadness and fear are palpable in the girl’s face and entire posture. Delacroix used cold, dull colors to enhance the feeling of grief, defining the girl sharply against a more blurred background of sky and a cemetery.

The Expulsion of Heliodorus

The Expulsion of Heliodorus is one of Delacroix’s celebrated murals painted for the Church of Saint-Sulpice in Paris. It is a Biblical subject from the Second Book of Maccabees. Heliodorus, the prime minister of the king of Syria, was sent to seize the treasures from the Temple of Jerusalem. The lively colors and the contrast of light and shadow all highlight Delacroix’s debt to the Venetian painters like Veronese and Tintoretto. Delacroix balances the drama and chaos of the events by placing them in a restrained architectural framework. Many of the initial viewers were shocked by this dramatic composition and the frenetic scene.

The Prisoner Of Chillon

The Prisoner Of Chillon draws on Byron’s famous poem of the name, which was loosely based on a 16th-century Geneva politician who was imprisoned in the Castle of Chillon on Lake Geneva. The painting is deliberately dark and gloomy, reflecting the atmosphere of a prison cell. The prisoner stretches out, straining against the chain to try and reach the second figure hiding in the shadows, that of his dying brother who remains out of reach. 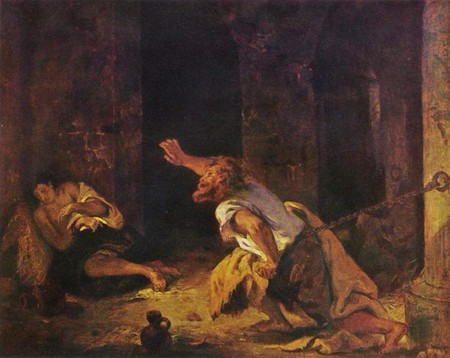 The Prisoner Of Chillon

A Young Tiger Playing With Its Mother

If you’re tired of the prevalent blood and horror in Delacroix’s masterpieces, A Young Tiger Playing With Its Mother is a good antidote. It was painted early in the artist’s career when he was attracted to animal subjects. Some claim that Delacroix used his cat as a model for these paintings, although there is also evidence that he did see tigers playing in the Parisian zoo. It is one of several tiger and lion works painted by Delacroix during this period.