10 Things To Do In Old Town, Bordeaux 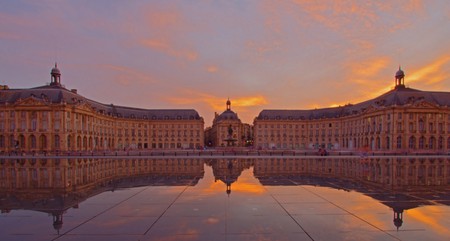 The city of Bordeaux is located on a bend of the river Garonne, in the southwestern corner of France. The neighbourhood between Cours de l’Intendance and Rue Peyronnet is the heart of Vieux Bordeaux (Old Bordeaux), and is listed as a UNESCO World Heritage site, famed as a city rich in art and history. Whether you’re a history fanatic or not, we’ve summarized the top ten things to do in Old Town. 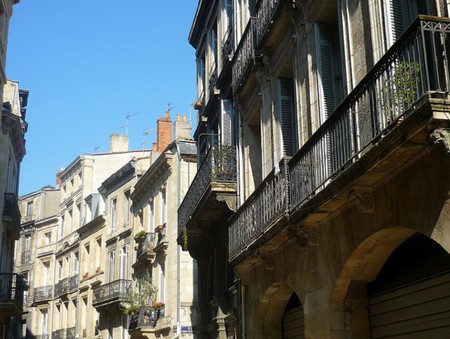 Regardless of whether or not you are able to catch a performance from Bordeaux’s Opera or the national ballet, the exterior of this magnificent building is a spectacle to behold in itself. The building is another one of the city’s transformation projects, dating back to the 18th century. The neoclassical façade has 12 immense Corinthian-style columns, with 12 statues that represent gods and goddesses from Greek mythology. The ultimate effect of the building is dramatic and imposing and dominates its setting in the heart of the Old Town. For further information on the social and cultural development of this quarter, sign up for the guided tour.

Entrance to downtown Bordeaux takes you through Port Cailhau, the 15th-century city door. This elegant gate was built in the 15th century to celebrate Charles VIII’s succession to the throne and features Gothic gargoyles and turrets, all the ingredients for a fairy-tale like facade. For a fantastic view of downtown Bordeaux and the Garonne, you can pay a small fee to climb the winding staircase to the top of the tower. The gate is also a popular spot in the evenings when the tower is well lit up, adding an atmospherical air of romance. 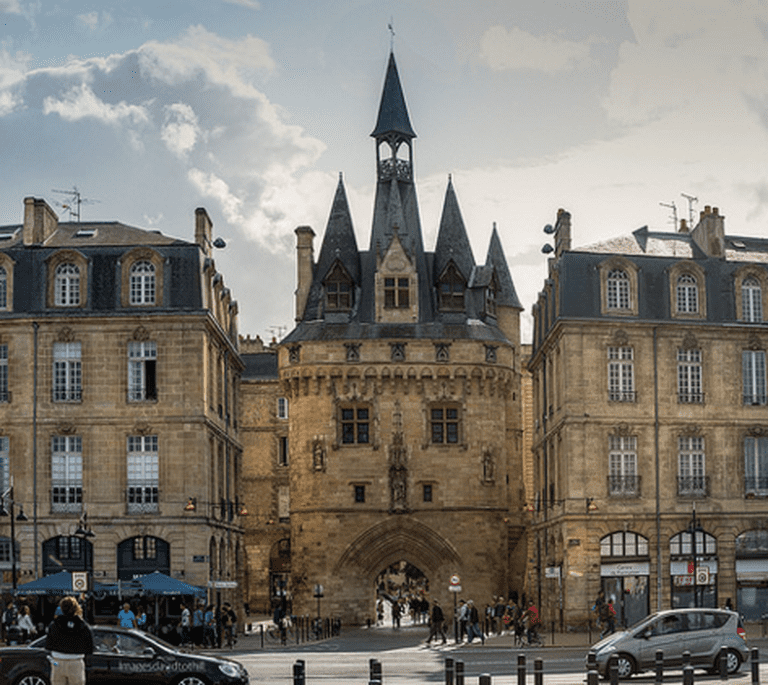 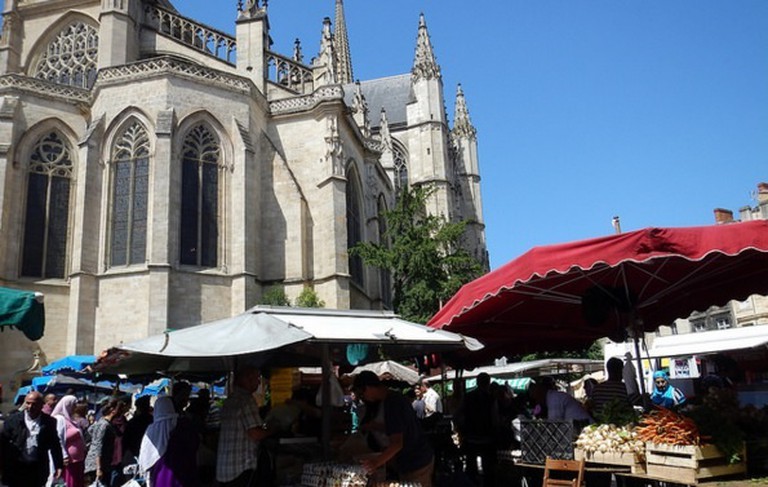 St Michel | ©Esther Millea/Flickr
If you’re in town on a Sunday, stroll over to the Basilica of Saint Michel, an extravagant church designed in a Gothic style. On the steps of the church is the weekend market, particularly vibrant on Sundays. Visitors can expect an eclectic array of items up for sale, such as antiques, paintings, and general bric-a-brac, all for moderate prices. While it may not be so practical to traipse a mounted stuffed animal around for the remainder of your travels, rigorous searches can get you some unique gems, and it’s a great place to soak up the vibrant atmosphere.
Open In Google Maps
Bordeaux, France
Give us feedback

Old Town Bordeaux is home to over 300 historical monuments and listed buildings, with only the capital itself topping this staggering record. It may seem slightly far-fetched to attempt to squeeze them all in, but why not at least attempt it, an option made possible by the plethora of bike rental agencies in the city. For a day jam-packed with historical exploration, you can make a whistle-stop tour of the best the Old Town has to offer. The old town benefits from cycle lanes and narrow streets that perfectly accommodate bicycles, and this option is also the most ecological and makes for a fun day out. For affordable prices on bicycle hire try Pierre Qui Roule.

Tucked away in the corner of Bordeaux’s Old Town is L’Eglise Sainte Croix, a stunning church, annexed to a Benedictine abbey. Take time to marvel over the unconventional style of the exterior and intricate engravings of figures. These details disclose its ancient Roman Catholic heritage, making this religious site impressive in its stamina against forces of the French reformation. The inside also makes a dramatic impression, with imposing columns and arches. Make sure to note the 18th-century organ. This spot is a calm haven for those seeking a moment to quietly collect their thoughts after a day of sightseeing. 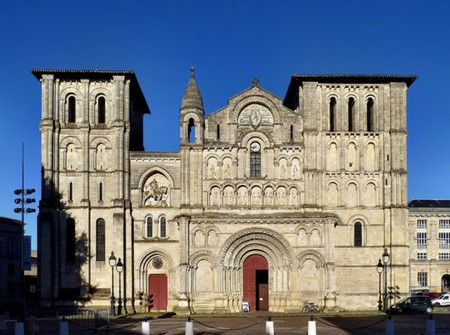 Place de la Bourse is undoubtedly one of the most photographed spots in Bordeaux, but it has certainly earned this accolade given its stunning architecture and location on the banks of the Garonne river. The square was designed by Louis XV’s chief architect Jacque Jules Gabriel, and its neoclassic style injects the surroundings with an air of opulence and grandeur. The Miroir d’Eau or water mirror transforms the scene on summer nights, when the enchanting architecture is bathed in silver light and reflected in the shallow pool, creating the perfect symmetry of the regal buildings.

In the heart of Bordeaux’s Old Town are the crossroads of three major boulevards (Cours Clemenceau, Cours de l’Intendance, Allées de Tourny). This space reflects the decadence of Bordelais architecture after the city’s 18th-century transformation from a medieval city. It was here the wealthy chose to live, including renowned Spanish artist Francisco Goya, who abandoned life in Spain, opting to reside in this luxurious quarter of Bordeaux. Today it is a site of hustle and bustle, favored for its high-end shopping boutiques, rustic French cafés, and bistros. Enjoy a relaxed amble around this spot and absorb the sumptuous atmosphere of life in the metropolis. 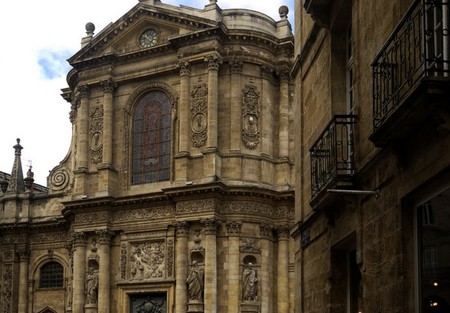 L’Eglise Notre Dame is an extravagant 17th-century church located in the old town. It is a must-see for those who have tired of the neo-classic theme of downtown Bordeaux, and are looking for a glimpse of the city’s ancient past. The church is tucked away from the grand thoroughfares, down a medieval street, but is visually stunning due to its unique Baroque style. The façade boasts impeccable attention to ornate detail, a commitment to Baroque design that continues inside. The Baroque aesthetics of the exterior is complete with intricate stained glass windows and a magnificent organ.

If it’s one thing the French are experts on, aside from their gastronomy and art, it’s their know-how for producing some of the world’s finest wine. Bordeaux benefits from the city’s geographical setting, surrounded by countryside and vineyards, and boasts some of the most high-end labels in the country, and therefore by proxy, maybe the world. Take advantage of the Old Town’s plethora of wine bars, and while away the hours in a typically French manner. Le Wine Bar is a charming spot in the heart of downtown Bordeaux with a wine list boasting some great local wines. 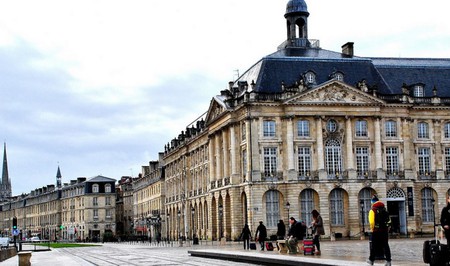 Last on our definitive guide to Bordeaux’s Old Town is this museum located in the Place de Bourse. Bordeaux has a rich history in shipping, and this museum enlightens visitors to the social and cultural history of customs in this area. The museum displays models of different types of ships as well as navigational instruments and is located on the banks of the Garonne as an ever-present reminder of the river’s influence on the wealth of the city. The museum adheres to a simple layout, but for the price of just €3, it is not overpriced.