10 Remote Villages in France (and How to Get There)

Ansouis home │© decar66 / Flickr
The French countryside, which there’s an awful lot of, is scattered with 32,000 villages. Many of them, with their narrow, cobbled streets and medieval hilltop churches, are among France’s most beautiful spots. To get a different flavor of the country other than what Paris and its other big cities offer, why not hire a car or hop on a train (or two) and sample the rural life for a couple of nights?

This small Mediterranean town lies 25 kilometers from the Spanish border and has a strong Catalan culture. At the beginning of the 20th century, Collioure was a popular retreat for Paris’ artists, particularly the Fauves, and it appears in the paintings of André Derain, Henri Matisse, and Georges Braque. It’s famous now for its anchovies and the annual Saint Vincent Festival in mid-August.

Public transport: Take the TGV from Paris Gare de Lyon to Béziers and then change to a TER service the rest of the way to Collioure. The journey should take a shade under six hours. 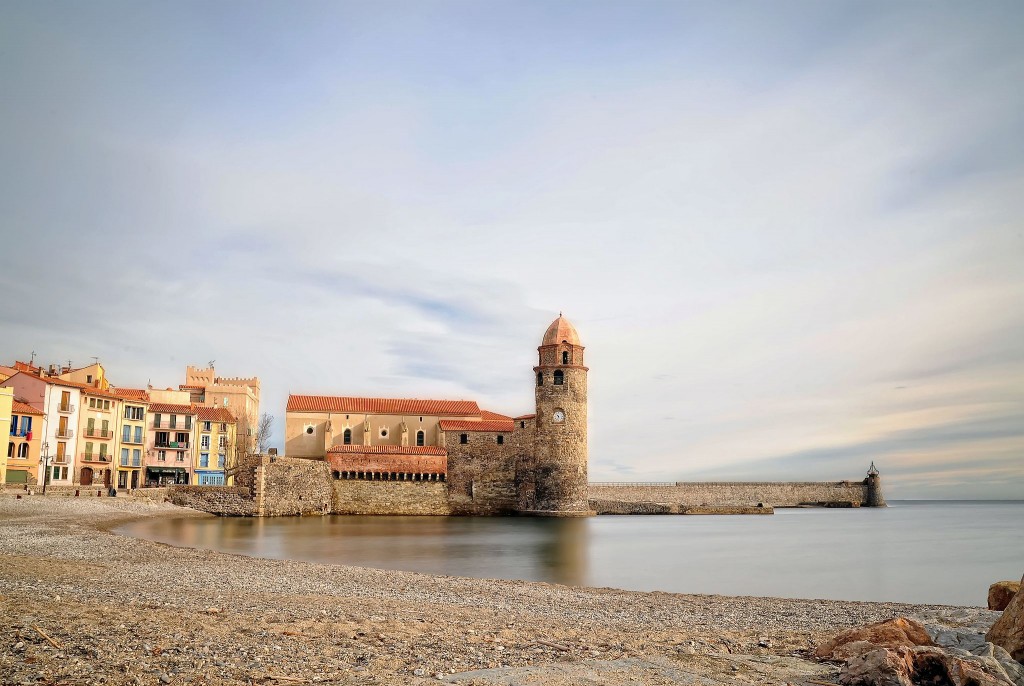 The Queyras Regional Park in the French Alps, a stone’s throw from the Italian border, is a place of outstanding natural beauty and one of France’s best-kept secrets. The area’s biggest draw is Fort Queyras, a 13th-century hilltop castle. Historical reenactments run during the summer so time your visit accordingly. The nearby village of Saint-Véran is also worth visiting.

Public transport: Take an overnight Intercités train from Paris Gare Austerlitz to Mont-Dauphin, which takes just over 11 hours and gets you in at 7:50AM. From there, take a bus or free shuttle to travel the remaining 28km to Château-Ville-Vieille. 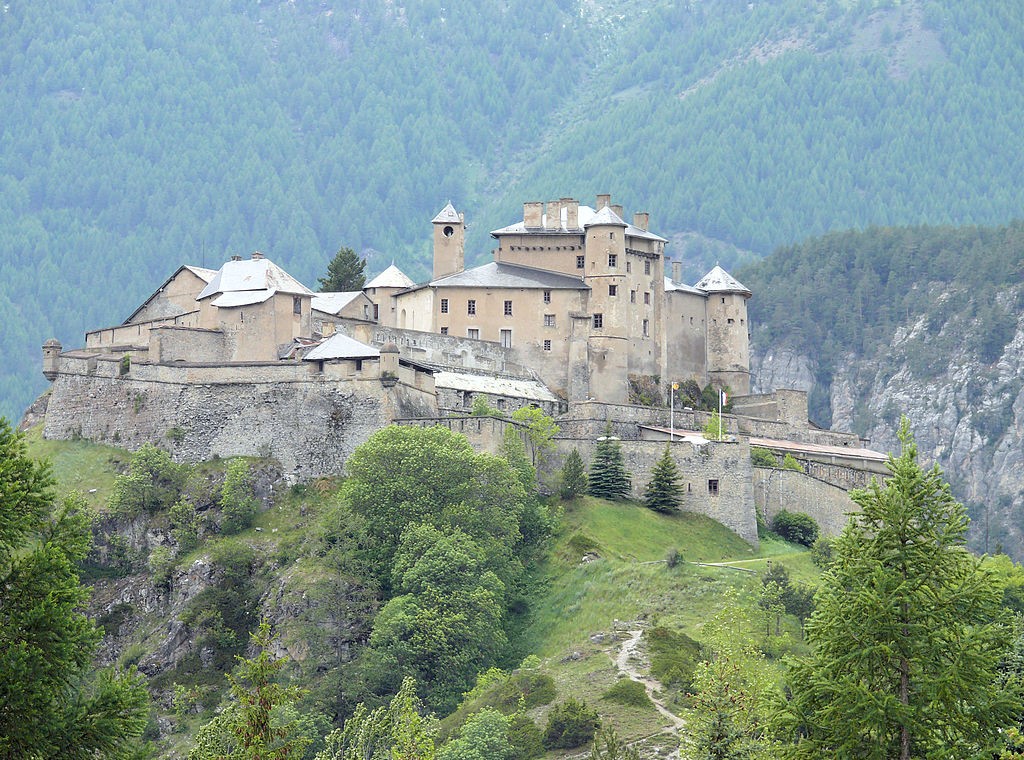 This spectacular seaside town on the southern coast of Corsica is perched on top of 250-foot limestone cliffs. The island and the town can be busy during the summer months but largely with visitors from mainland France, unlike other places on the French Riviera which get swamped with English-speaking tourists. The Genoese towers, Torra di Sant’ Amanza and Torra di Sponsaglia, are two of the town’s most fascinating historic sights.

Public transport: Fly direct from Paris Orly to Figari and take a taxi or bus the 20km south to Bonifacio. 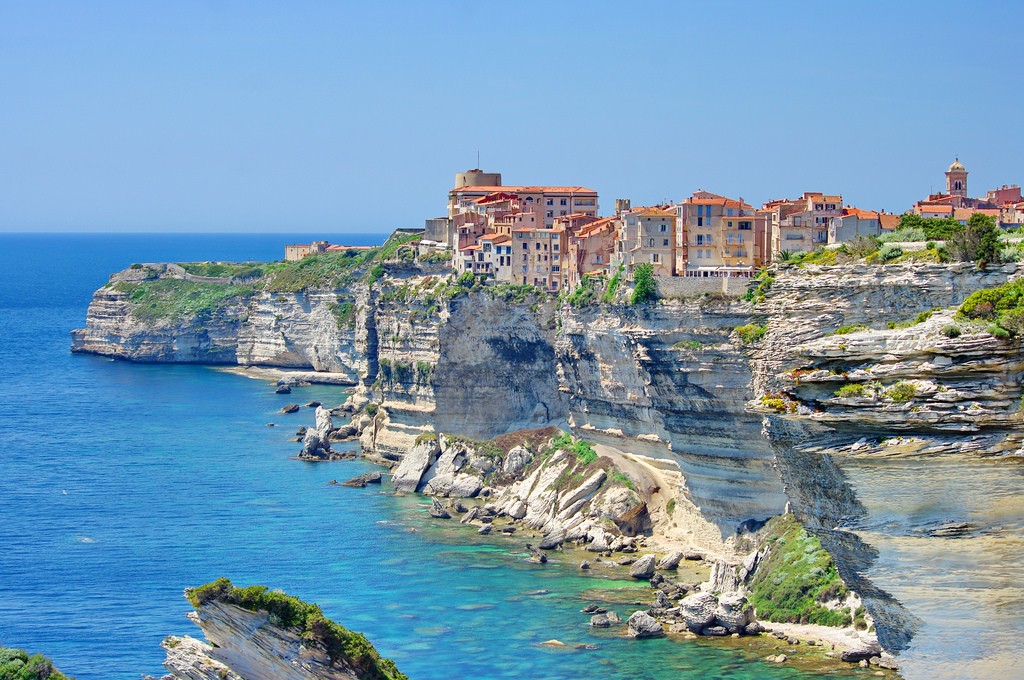 Archaeological site
Chateau de Castelnou | Chateau de Castelnou
This secluded village in the Pyrenees, which has a population of 341, is rated as one of the most beautiful in France. The castle that overlooks the village and the surrounding countryside dates back to the 10th century and the church of Sainte-Marie du Mercadal to the 13th. Public transport: Take the TGV from Paris Gare de Lyon to Perpignan, which takes just over five hours. You can then take a 20-minute taxi to Castlenou, which will cost around €30, or take a TER service to St Feliu d’Avail which is a 10km walk from Castelnou.
More Info
Open In Google Maps
Castelnou, Occitanie, 66300, France
View menu
Visit website
Visit Facebook page
Send an Email
Give us feedback

This tiny Alsatian village is most famous for its wine. The Grand Cru Zoztzenberg is one of the region’s most prized varieties, which is now made with the local Sylvaner grape. Aside from wine-tasting, there are guided tours, 18th-century mills, and a museum to keep you occupied during your trip.

Public transport: Take the TGV from Paris Est to Strasbourg and switch to the TER train to Barr. These legs will take a little more or less than three hours, depending on the regularity of the service. Mittelbergheim is a 20-minute walk from the station. 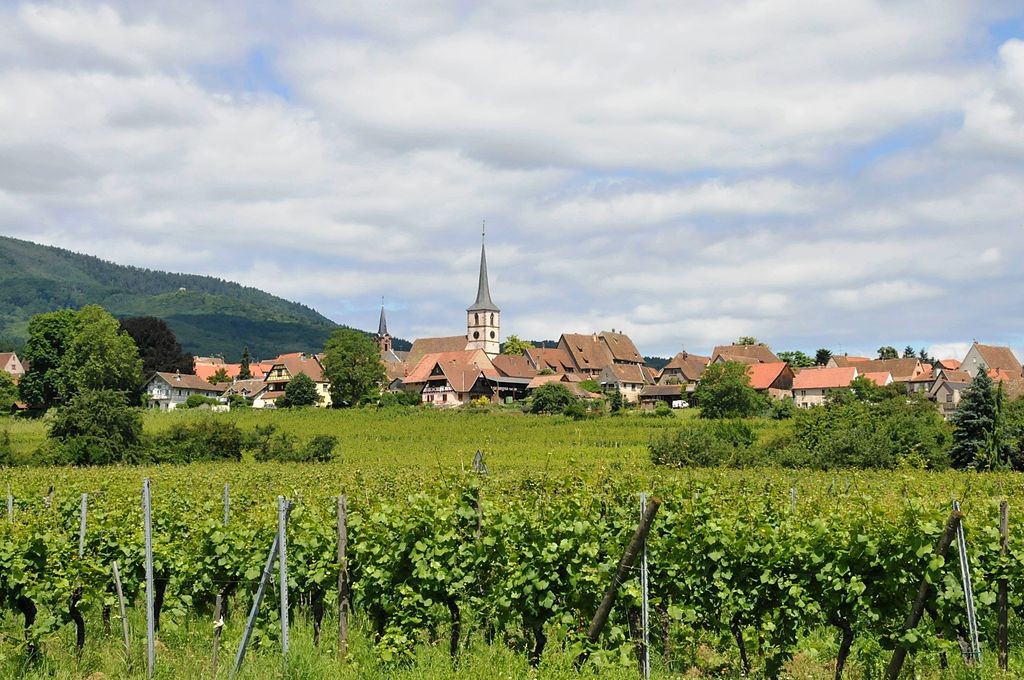 Another, tiny Pyrenean mountain town, Eus belonged to Spain until the 16th century and it retains much of its Spanish flavor to this day. The panoramic views from the church of Saint Vincent at the top of the hill are unparalleled and the narrow cobblestoned streets of the citadel are a treat to explore.

Public transport: Take the TGV from Paris Gare de Lyon to Perpignan and change to the TER service to Marquixanes. After this seven-hour train journey, get on the Line 100 bus for the five-minute, one-euro ride to Eus. 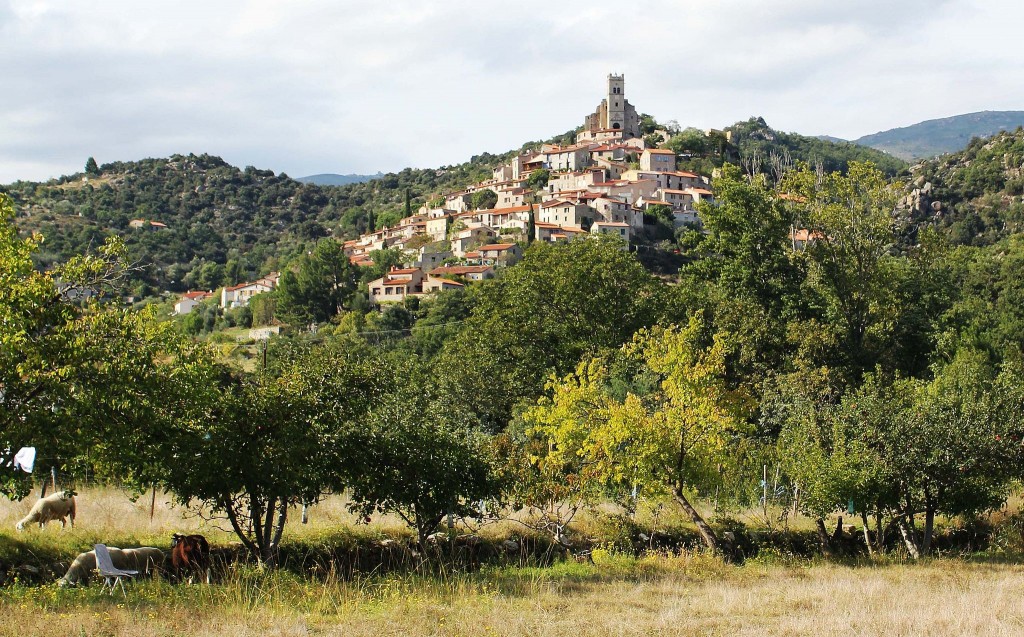 Nestled in the rolling countryside of the Dordogne, Saint-Amand-de-Coly is a small village with a lot of history, including an abbey with its roots in the 12th century and a château and hospital from the 14th century. It is also famed for its traditional cookware and the farmers’ market held every Tuesday evening in July and August in the old tobacco barn.

Public transport: Take the Intercités train from Paris Austerlitz to Brive-la-Gaillarde and the TER to Candat-le-Lardin, which takes just under six hours. From there, it’s a €20 taxi ride to travel 10km to Saint-Amand-de-Coly. 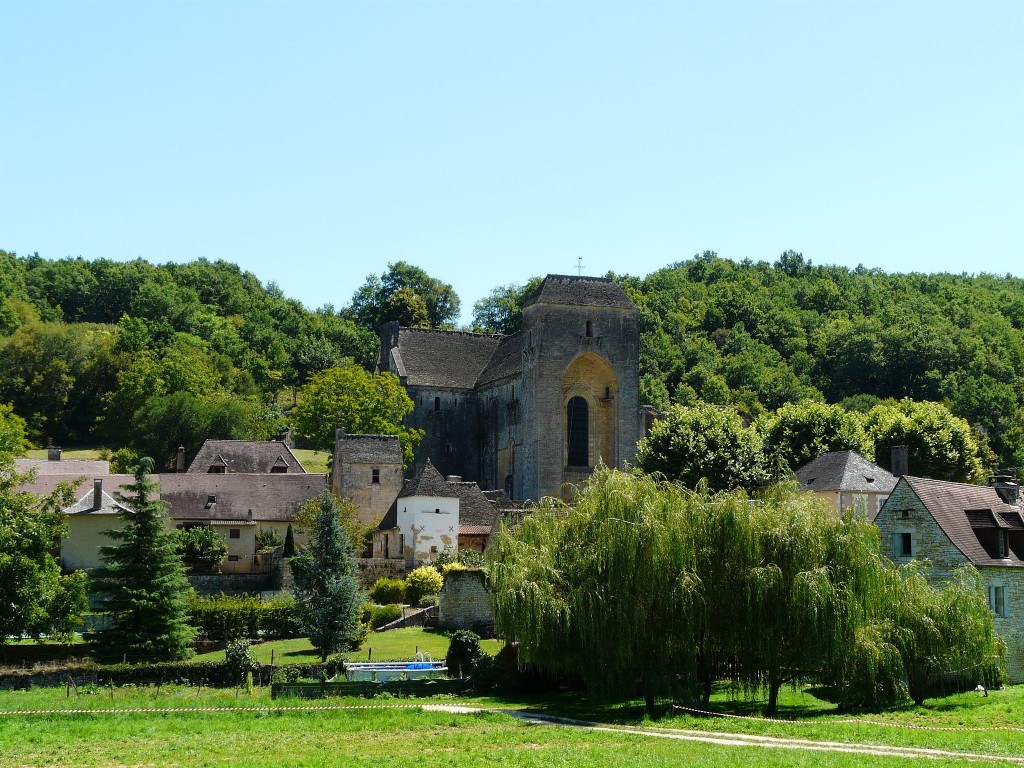 With only 78 inhabitants, this tranquil west coast village on the Gironde estuary is the smallest place on our list. Its famous church, the Église Sainte-Radegonde, was built in the 11th century and there are a few secluded beaches along its shoreline.

Public transport: Take the TGV from Paris Montparnasse to Angouleme and then transfer to the Autocar 50084 which will take you to Royan. This should take around five hours. From Royan, take a 15-minute taxi or the Line 112 bus from the stop Lycée Cordouan, which is a 20-minute walk from the station.

Located in the Luberon massif, an amazing but little-known destination for hikers in France, the hilltop town of Ansouis overlooks the Durance river. The narrow streets within the 10th-century fortress walls are filled with boutiques and artists’ studios. The town is particularly noted for its ceramics and wood sculptures.

Public transport: Take the TGV from Paris Gare de Lyon to Marseille Saint Charles and switch to the TER service to Pertuis. The journey time to this point will be just under five hours and you can either walk the 7.5km to Ansouis or take a taxi or local bus service. 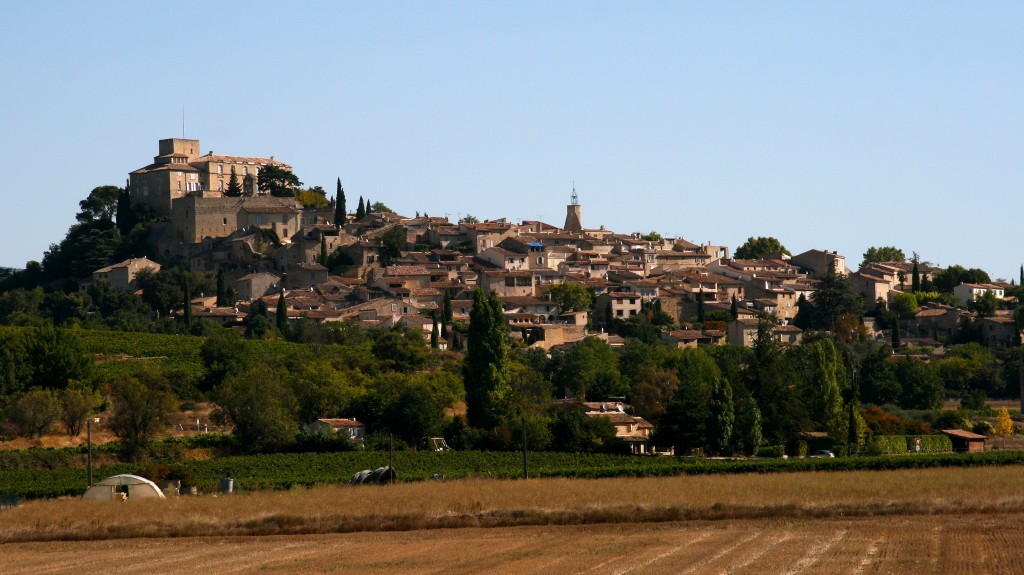 Most people who travel to this medieval village in the Dordogne are pilgrims who have come to worship at the sanctuary of the Blessed Virgin Mary. In the past, this included many of the kings and queens of Europe. Today, Rocamadour is also famous for the goat’s milk cheese that carries its name. It is one of France’s most stunning UNESCO World Heritage Sites.

Public transport: Take a direct Intercités train from Paris Austerlitz to Souillac in as little as four-and-a-half hours and then a taxi from the station to Rocamadour. 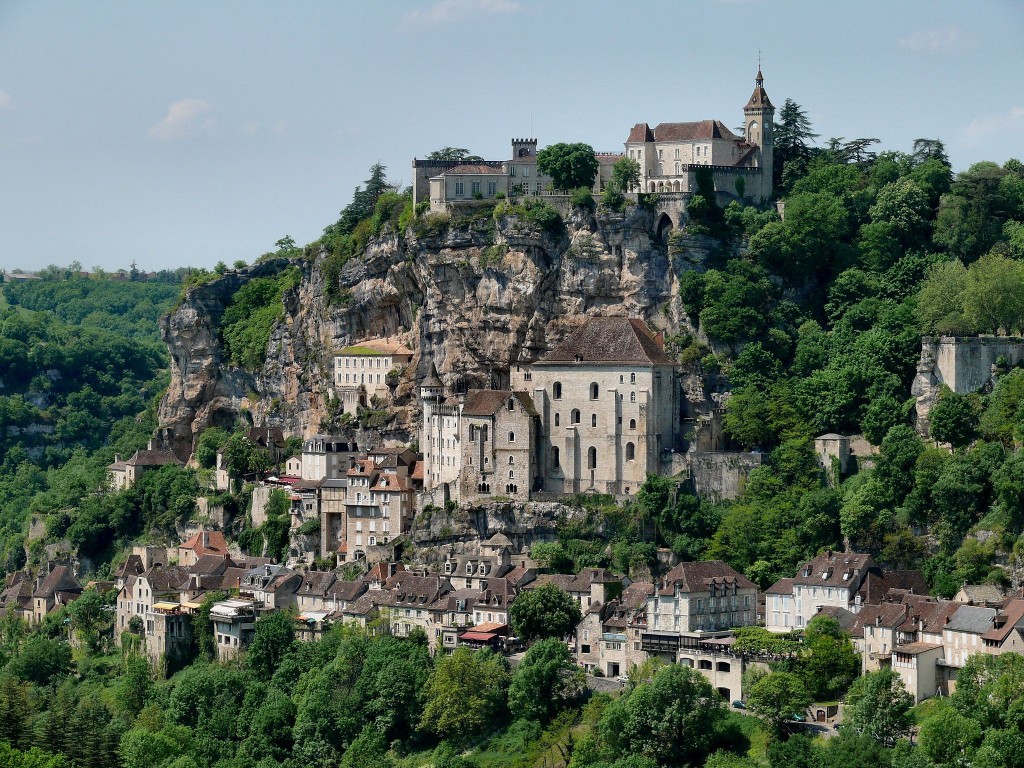