10 Reasons Why You Should Visit Nice At Least Once 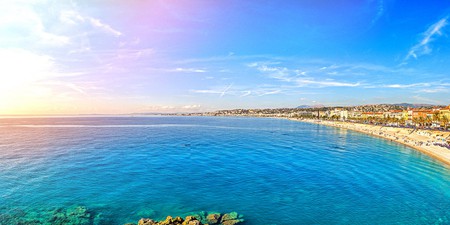 There are hundreds of wonderful things to do in Nice, but here are 10 of the best | © Kintaro Yamata/Flickr

Nice is a wonderful place to visit. Situated on the French Riviera, it has everything you need for a great time – stunning beaches, sensational bars and restaurants, amazing views, and wonderful culture. Here are our top 10 reasons to go.

Nice’s carnival is one of the biggest in the world and takes place every February. The first carnival was held in 1274 but it didn’t become official until the 19th century. There are lots of events held around town – cold water swims, waiter races and ‘flower battles’ where up to 100,000 flowers are thrown. Dressing up is encouraged and it’s great fun. Up-to-date information is on the official website.

Socca is the local fast-food, made in copper pans over a very high heat. It’s made from chickpea flour, olive oil and water, which are poured into a flat pan and raked during cooking to make a crispy pancake. It’s the delicacy of the region and costs about €3 or €4. Head to Rene Socca or Lou Pilha Leva if you want to sit down, or Chez Theresa’s stall in the flower market (Cours Saleya) if you want to eat on the go. Try making it yourself afterwards too – chef Yotam Ottolenghi has a great recipe.

This is a large pan of socca, a common fast food in France. It is flatbread made of chickpea flour and olive oil. It is the same thing as farinata, which is the Italian name #rudd_sarah #GustolabInstitute #Foodmedia #Foodstudies

Stroll Along All 7 Miles of the Promenade des Anglais

The Promenade des Anglais is one of the most iconic roads in France, starting at the airport in the west and continuing all the way around the Baie des Anges (‘the bay of angels’) to the headland in the east, by the castle. It was the brainchild of English expats in the 19th century, who wanted a promenade and thought it would be a good idea to offer work to all the beggars in the city after a particularly harsh winter. It is full of bars and restaurants, beach clubs and ice-cream stalls. Sit on one of the iconic blue chairs, read a book and watch the world go by.

Jazz arrived in Nice in the 1920s, along with American expats who made Nice their home. Many, like F. Scott Fitzgerald, hired big houses and threw wild parties, trying to forget the horrors of the First World War. There are lots of jazz clubs in Nice, an amazing jazz festival in July or you can visit the two places that are synonymous with the period – the Hotel Belles Rives, where Fitzgerald wrote or the Hotel du Cap, which he used as inspiration for his classic novel Tender is the Night.

Walk in the Footsteps of the Romans

The Romans founded the city of Cemenelum in the 1st century – the remains of which are now part of the very chic neighbourhood of Cimiez. There was an amphitheatre here and thermal baths, both of which are celebrated in the Museum of Archeology. Walk around the lovely park and have a picnic.

‘La Belle Epoque’ (meaning ‘the beautiful age’) was the period of time in French history between the Franco-Prussion War in 1870 and the First World War in 1914. It was when France went through a lot of changes, socially and culturally. It was an incredibly optimistic period, when anything was believed to be possible. The architecture of this period reflects this in the grand boulevards that were laid out and the beautiful houses that were built. Head to Boulevard de Cimiez, the Grand Hotel (built 1908), the Majestic Hotel (the biggest) and Queen Victoria’s favourite, the Excelsior Régina Palace.

Lounge in Style on the Beach

Nice has a wonderful selection of public and private beaches. Either head to the public beaches of La Réserve, Coco Beach or Villefranche-sur-Mer along the coast. If you want to lounge around in style, however, head to one of the private beaches where you can order your drink of choice while you recline on a wonderful sun lounger close to the beach. People love the chic Castel Beach or Ruhl Beach, which is great for families.

Take in the Panoramic Views

There are a couple of places in Nice where you can get some amazing views of the city and the surrounding countryside. Head to Castle Hill in town, where – after climbing the stairs (or taking the lift) – you can relax with a little picnic. If you fancy a hike, head out to Mont Boron where you can walk in the greenery, just outside of town.

Nice is well known for its beautiful cobbled streets of Old Town and by the Old Port (‘le vieux port’). Make a morning of it and wander through the streets, drinking a coffee or two and window shopping.

Lose Yourself in Some Amazing Art

Nice is lucky enough to have been home to some wonderful painters and Matisse and Chagall are up there with the best of them. Head to the Musée Matisse, which is housed in Matisse’s villa. They have a lovely selection of his work and, because it was his home for 50 years, it offers a wonderful insight into the man and his work. Marc Chagall is well known for his work interpreting the Old Testament and this museum is dedicated to that. He did some lovely stained glass windows. The museum also has an amphitheatre where concerts are held.