Palaces in and Around Dijon You Can Actually Stay In 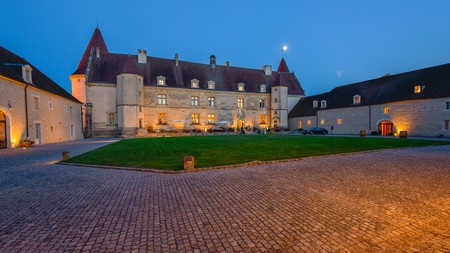 Burgundy and its capital, Dijon, may be renowned for the gastronomic flair they have brought to the world, but, with architecture that includes gothic churches and Renaissance façades, the edifices in Dijon pack a punch. For an extra-special holiday, book a stay at one of these châteaux with Culture Trip.

Whilst you might know Dijon for its most famous export, mustard, the city has plenty more to offer for a weekend getaway. The historic centre boasts striking architecture, fantastic art galleries and museums, as well as a large, covered food market, where you can explore the local food scene. Dijon is also just an hour’s drive from the world-famous Burgundy wine region, making it fertile ground for budding sommeliers. Whether you’re looking to stay in the heart of the city or among vineyards, here are some of the finest palaces that you can actually stay in. 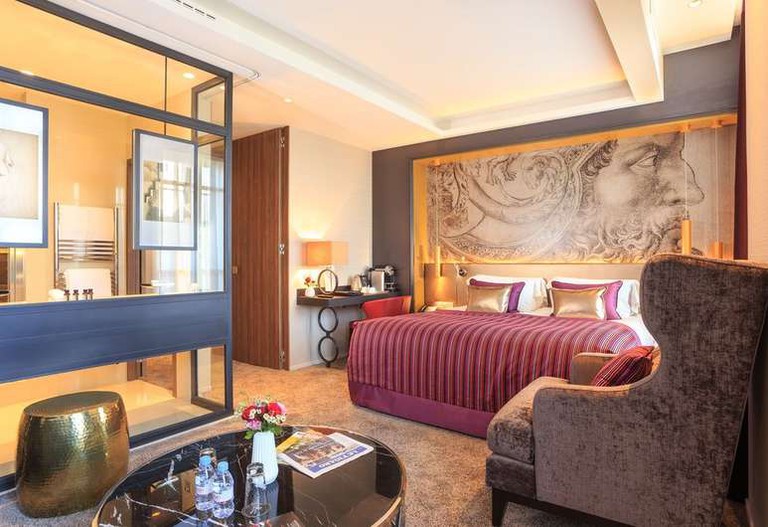 Courtesy of Grand Hotel La Cloche / Hotels.com
View Rooms
The Grand Hôtel La Cloche delivers contemporary design and comfort in the historic setting of a listed Haussmannian building. Located in the centre of the city and with views over Place Darcy, the hotel is perfectly situated for exploring the region. If you’re in the mood for some downtime back at the hotel, book in at Spa by La Cloche, which offers treatments from prestigious beauty brands Carita and Vinésime, whose products use grapes from nearby Burgundy.
More info 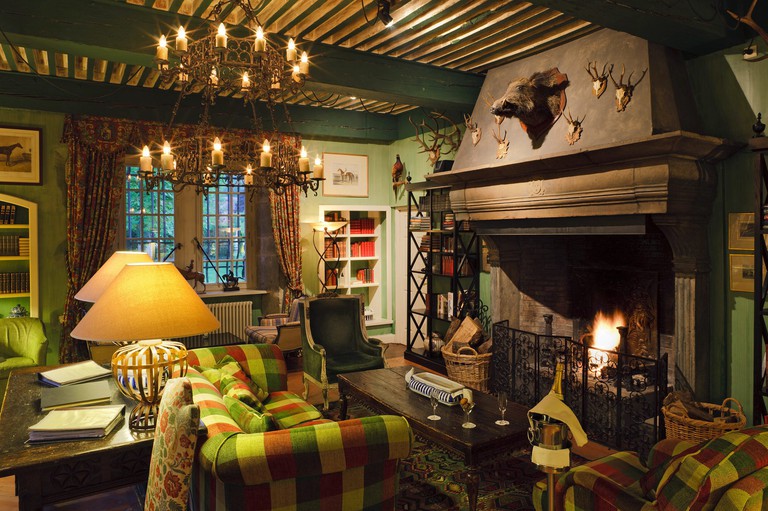 Courtesy of Château de Germigney / Expedia
The flames lick the top of a floor-to-ceiling fireplace in a characterful lounge room adorned with antlers and stuffed animals. They’re some of many trinkets that hint at the property’s former role as an 18th-century hunting lodge. Now a 20-room four-star hotel, guests can use its surrounding leafy countryside east of Dijon not to hunt but to hike and cycle. Or simply to admire – the hotel’s manicured garden with fountains also comes with an outdoor pool.
Open In Google Maps
31 Rue Edgar Faure, Port-Lesney, Bourgogne-Franche-Comté, 39600, France
+33384738585
Visit Website
Give us feedback 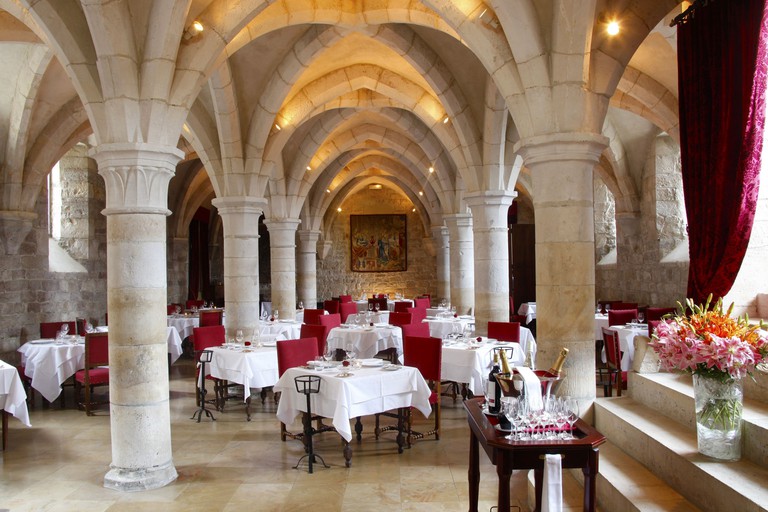 Courtesy of Château de Gilly / Expedia
View Rooms
Located near the village of Vougeot, between Dijon and Beaune, Château de Gilly is a former residence of Cistercian monks, but, unlike others, this historic property comes with its own moat. Inside, the five-star spot has striking vaulted ceilings and grand fireplaces, while, outside, a leafy terrace awaits for enjoying an evening cocktail or two.
More info 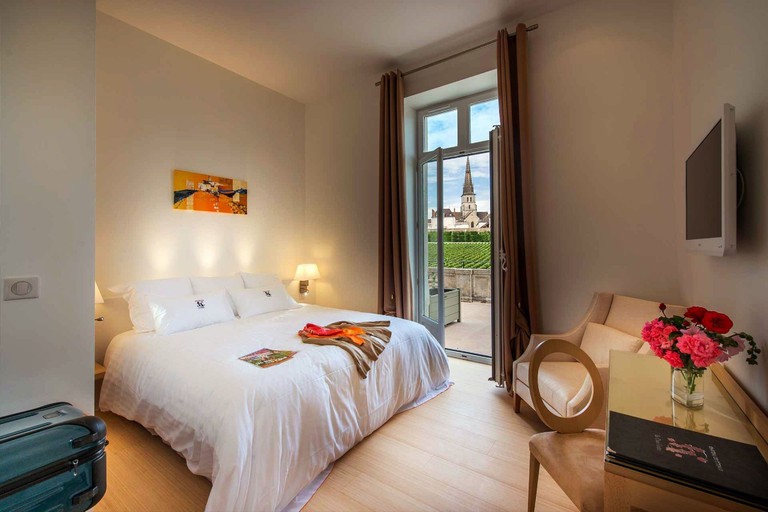 Courtesy of Château de Cîteaux / Expedia
View Rooms
If you want to experience wine tasting as well as explore Dijon, Château de Cîteaux – La Cueillette is set in the wine village of Meursault, just a 45-minute drive from the city and located on Burgundy’s popular Route des Grands Crus. You can also enjoy some of the best wines from the region back at the hotel at the gilded 19th-century restaurant. The hotel also offers a large spa with unusual Fruitithérapie® treatments, which use the power of local red berries to rejuvenate the skin.
More info 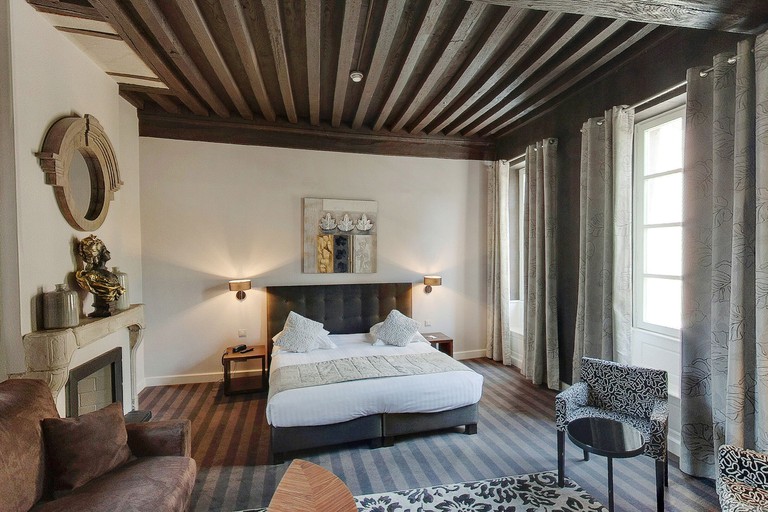 Courtesy of Maison Philippe le Bon / Expedia
Located just a couple of minutes from the Palace of the Dukes of Burgundy, the historic Maison Philippe le Bon is situated right in the centre of Dijon. The hotel is a collection of three former hôtels particuliers, or private mansions, which date back to the 15th century and are now classified as listed monuments. The bar and restaurant, which serve a seasonal menu of French classics, have also retained some of their period features, such as stone walls and beamed ceilings.
Open In Google Maps
18 Rue Sainte-Anne, Dijon, Bourgogne-Franche-Comté, 21000, France
+33380307352
Visit Website
Give us feedback 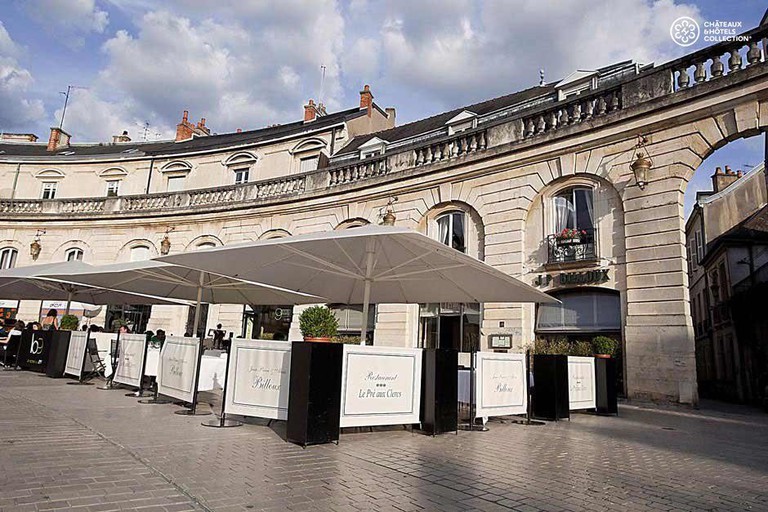 Courtesy of Hôtel des Ducs / Expedia
Résidence des Ducs is located in the heart of Dijon, just steps away from many of the main sites in the city, including the Palais des Ducs, the Musée des Beaux-Arts and the Notre-Dame church. The 15th-century house was renovated in a contemporary style back in 2019 but still offers plenty of historic charm, with its rustic beams and half-timbered exterior. If you’re travelling in a group,there’s also a selection of apartments, which come with fully fitted kitchens, living rooms and dining rooms.
Open In Google Maps
3 Rue du Palais, Dijon, Bourgogne-Franche-Comté, 21000, France
+33380673131
Visit Website
Give us feedback 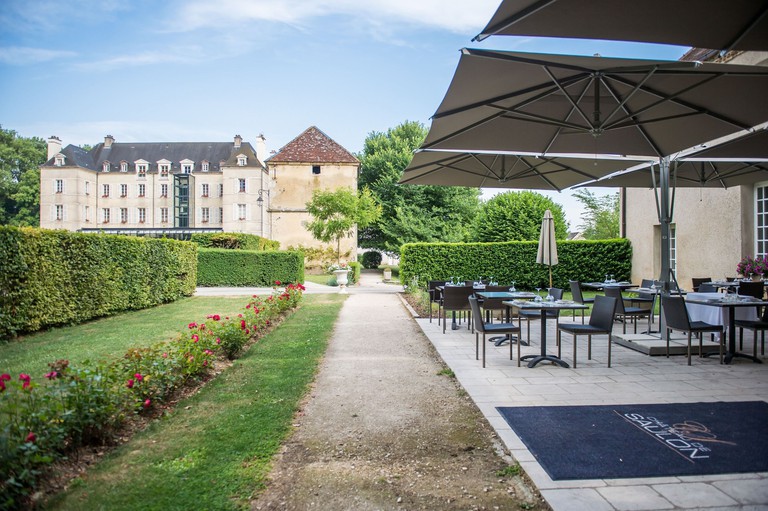 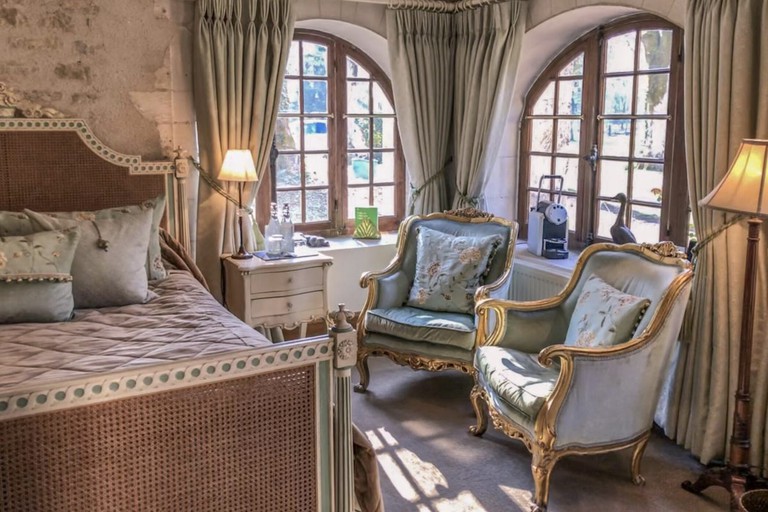 Courtesy of Abbaye de la Bussière / Expedia
Abbaye de la Bussière, which belongs to the prestigious Relais & Chateaux hotel group, is a former 12th-century Cistercian abbey transformed into a luxurious four-star hotel. Rooms are lavishly decorated and the beautifully restored lounges still have many of their original features. The two restaurants are overseen by Chef Guillaume Royer who holds the distinction of Meilleur Ouvrier de France, which is only awarded to the very best craftsmen and women in the nation, so expect exceptional cuisine in a historic setting.
Open In Google Maps
D33, La Bussière-sur-Ouche, Bourgogne-Franche-Comté, 21360, France
+33380490229
Visit Website
Give us feedback 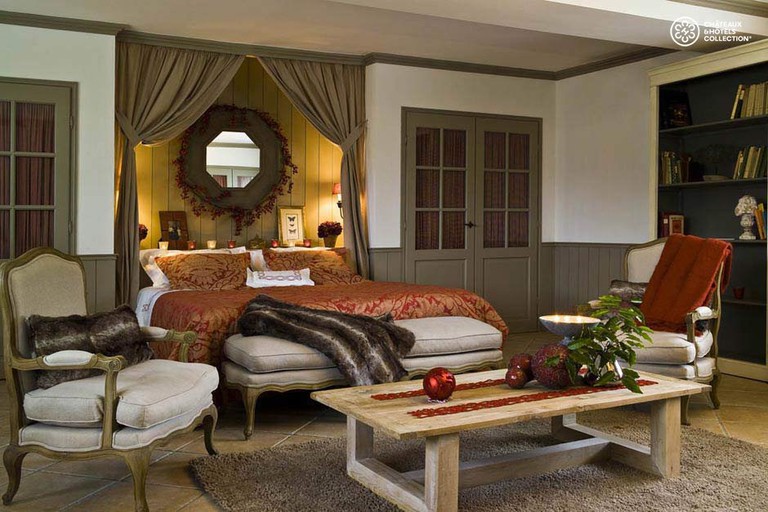 ©Chateau de Courban
Château de Courban is a must-visit for gastronomes thanks to Chef Takashi Kinoshita, who presides over the hotel’s one Michelin-star restaurant. Chef Kinoshita combines classic French gastronomy with culinary influences from his home country of Japan to create a unique dining experience in Burgundy. The hotel also has an indulgent spa with treatments courtesy of cult French brand Nuxe.
Open In Google Maps
7 Rue du Lavoir, Courban, Bourgogne-Franche-Comté, 21520, France
+33380937869
Visit Website
Give us feedback 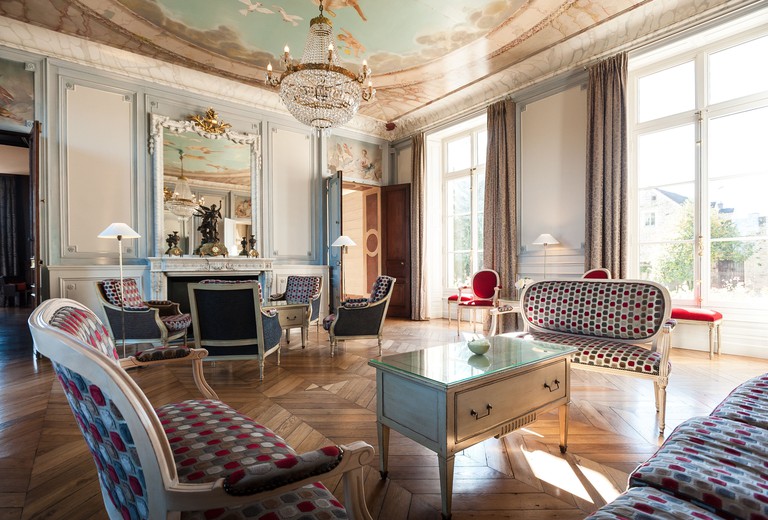 Courtesy of Château Sainte Sabine / Expedia
View Rooms
Just a 45-minute drive from Dijon you’ll find Château Sainte Sabine, a 17th-century castle set in an 8ha (20-acre) park where, if you’re lucky, you might even spot deer roaming free. In addition to its natural surroundings, another highlight here is the restaurant, headed up by Chef Benjamin Linard who trained under Michelin-star chefs before moving to the chateau, where he serves up French classics using local, seasonal produce.
More info 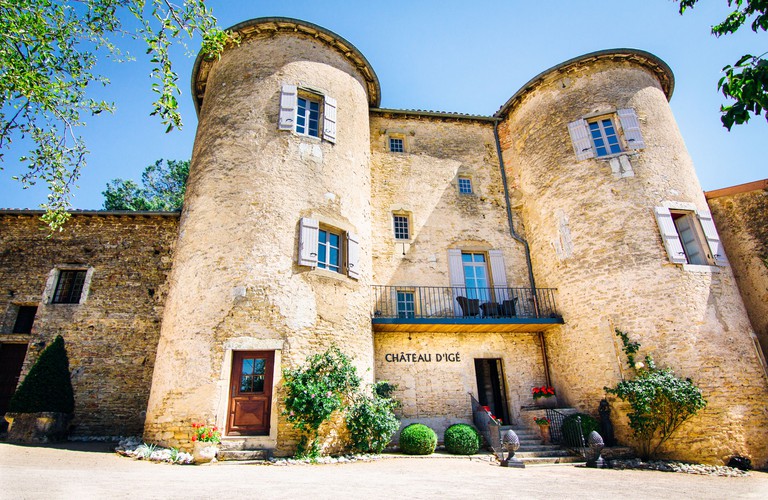 Courtesy of Château d'Igé / Expedia
View Rooms
Situated an hour and a half by car from Dijon in the Mâconnais wine region, Château d’Igé offers the unique experience of staying in a 13th-century castle. The elegantly furnished rooms, some of which can even be found in the towers and the keep, have been decorated in a period style – think four poster beds and antique furniture – which matches perfectly the original features of the castle such as vaulted ceilings and grand fireplaces.
More info 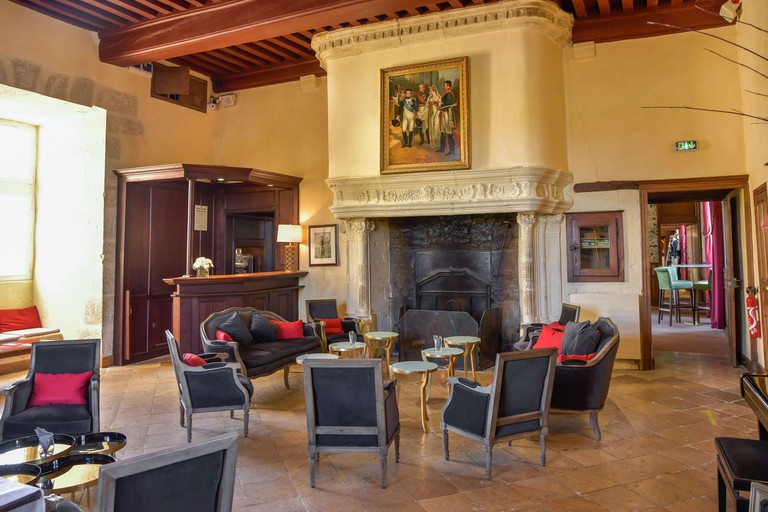 Courtesy of Hôtel Golf Château de Chailly / Expedia
View Rooms
Calling all golfers! This is either a castle that has a golf course, or a golf course that comes with a castle, depending on your level of enthusiasm for the sport. Even if you never go near the links, the setting of the spectacular 16th-century Château de Chailly is mesmerising, and so convenient. It’s a haven of peace just under 50km (30mi) from Dijon and all its attractions, and under 10 minutes from the stunning Morvan Regional Natural Park.
More info 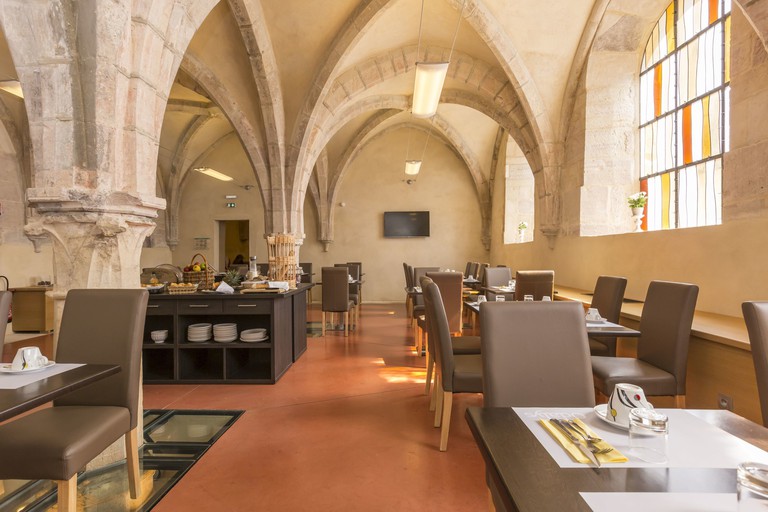 Courtesy of Appart'hôtel Odalys City Les Cordeliers / Expedia
Although set in a former monastery, the 74 rooms and suites at this aparthotel in Dijon’s historic centre include plenty of modern touches. Kitchenettes come with dishwashers, microwaves and fridges, the bathrooms have heated towel rails, and accessible rooms are available for guests with reduced mobility. The dining room is where you’ll be reminded of the building’s history. Here, stained-glass windows shine brightly under an arched stone ceiling and supporting pillars, making it a great place to enjoy a breakfast of fresh fruit and viennoiserie.
Open In Google Maps
5 Rue Turgot, Dijon, Bourgogne-Franche-Comté, 21000, France
+33380428862
Visit Website
Give us feedback