The garden is a naturally versatile space for artists; it can function as a resplendently colorful backdrop, draw natural and religious imagery, harken to the artist’s personal relationship with nature, or even provide a horticultural guide to the time it was painted. Here are ten gardens by well-known artists in history, each with their own distinct history and significance.

The Garden of Earthly Delights by Hieronymus Bosch is not so much a literal garden as a questionable moralistic depiction of various outdoor scenes. The first panel is the Garden of Eden, the descent into hell as recompense for sinning in the third panel, and a psychedelically controversial center panel that may be a depiction of paradisiacal ecstasy or the wild extent of human sinfulness. It was painted between 1490 and 1510 and, due to its triptych format, was probably intended as an altarpiece — however, due to the amphibious eroticism and outlandish imagery, it was most likely for a patron and not a church. The painting is currently on display in the Museo del Prado in Madrid. 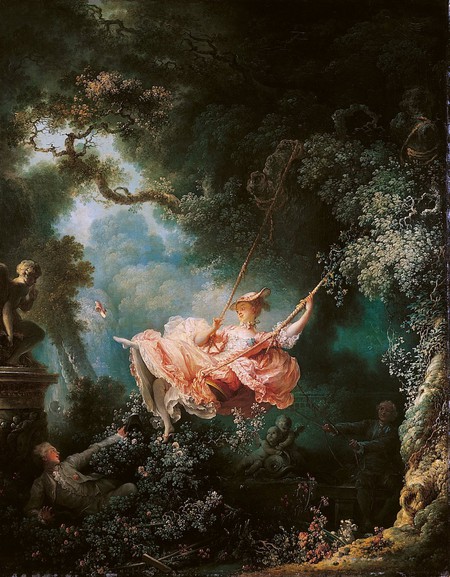 Rococo art was inspired by ‘flighty’ affairs in the 18th-century French courts, and paintings such as The Swing by Jean-Honoré Fragonard were painted with the intention of urging fanciful love and secret liaisons. The painting was commissioned in 1767 by Charles Colle to depict his mistress in a secret and overwhelmingly romantic garden and would have likely been placed in a secret boudoir used for the specific purpose of frivolous affairs. The garden incorporates a curtain of lush foliage and Greek motifs in the form of statues, little angels which ironically embody innocence and discretion. 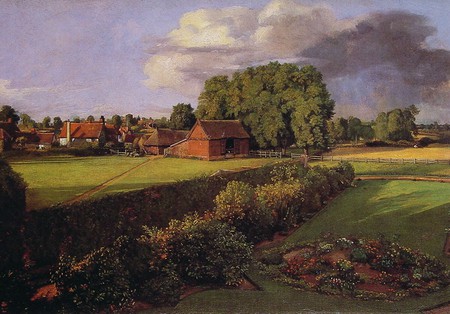 Constable had a uniquely sentimental relationship to this particular subject; he grew up in the house that the garden belonged to, and his parents curated and cared for the flowers. The painting was painted from the second floor of his childhood home, creating a nostalgic feeling of a child gazing out from the window and dreaming. Golding Constable’s Flower Garden was painted in 1815.

Le Déjeuner sur l’herbe, or Luncheon on the Grass, by Édouard Manet was first received as a shocking and confusing display, the reason for which is quite obvious. Like Olympia, half of the horror was inspired not only by the nudity and ‘come hither’ expression but also the stark two-dimensionality with which the scene was painted — it seemed almost photographic and lay certain characters even more bare than they already were. It was painted from 1862-1863, and currently lives in the Musée d’Orsay in Paris. 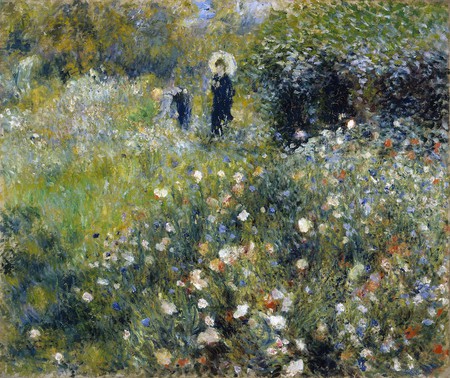 Pierre-Auguste Renoir, Woman with a Parasol in a Garden, 1875

Woman with a Parasol in a Garden by Pierre-August Renoir is also a floral feat of impressive impressionism, and despite it’s decadent and hazy foliage, the painting was painted not in an expansive country field but rather his own studio garden in Montmartre, which happened to be in serendipitous bloom. 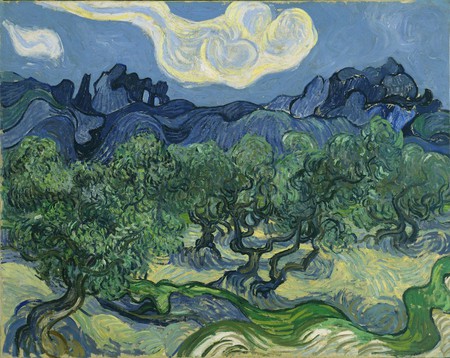 Van Gogh painted Olive Trees in a Mountainous Landscape during his self-imposed stay at the Saint-Remy-de-Provence asylum in 1889. As he was gradually allowed to venture further outside of the compound, he found that the nearby olive trees changed continuously with light and were, therefore, wonderfully compelling natural subjects. This painting is one of 18 that he completed at Saint-Remy of the olive trees alone. The immersive experience of ingesting and recreating the natural scene revitalized his formerly ardent devotion to God, or a higher natural power, that he had abandoned at the time of entering the asylum. 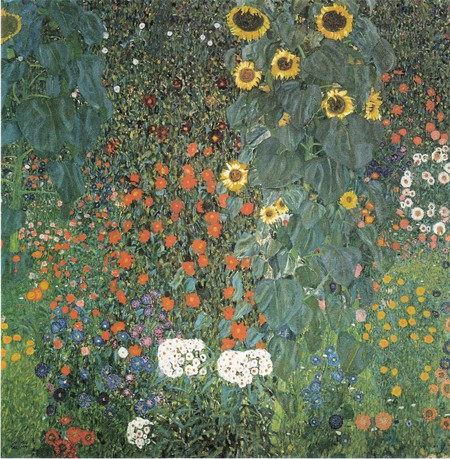 The very frontal effect of Klimt’s Bauerngarten mit Sonnenblumen, painted in 1906, is due to the fact that the flowers grew on a slope on Lake Attersee. Klimt’s depiction of nature is anything but stationary — rather, his use of bright, deep, and punctuating colors accentuated the life in nature and the domesticated garden.

Paul Cézanne, The Garden at Les Lauves, 1906 | © The Phillips Collection/WikiCommons

Although Paul Cézanne is usually heralded for his post-impressionistic masterpieces, The Garden at Les Lauves is an inherently cubist piece of work. Cézanne was known for being infuriatingly dissatisfied with his paintings and would obsessively paint countless landscapes, most notably those of Mount Sainte Victoire. The Garden at Les Lauves is comprised of vigorous brushstrokes that lend themselves to a ‘bottom-up’ interpretation of the painting that makes it a major cubist influence. The painting was completed in 1906.

Monet’s Agapanthus Triptych, most commonly known as part of the Waterlilies series, is a feat of impressionism that spans an awe-inspiring 42 feet. The triptych was painted from 1913 to 1916 in the garden at Monet’s home in Giverny. Monet planted the flowers himself and curated his garden with a painstaking precision that foreshadowed his efforts to paint it.

Sorolla, often heralded as ‘the Spanish painter of light,’ is well known for his depictions of everyday scenes of life, particularly those outside. He once remarked that, ‘the color of light is blue,’ a sentiment that can be seen in his cool-toned painting of the glorious garden at his Madrid family house.