10 Beautiful Artworks By Monet You Should Know

Claude Monet’s name is basically synonymous with the French Impressionist movement. Along with a number of other artists, like Manet, Renoir, and Pissarro, he was at the vanguard of the movement from Realism into Impressionism. The name of one of his paintings is, indeed, where they got the name for the movement. Culture Trip profiles 10 works by Claude Monet that any Impressionist lover should know. 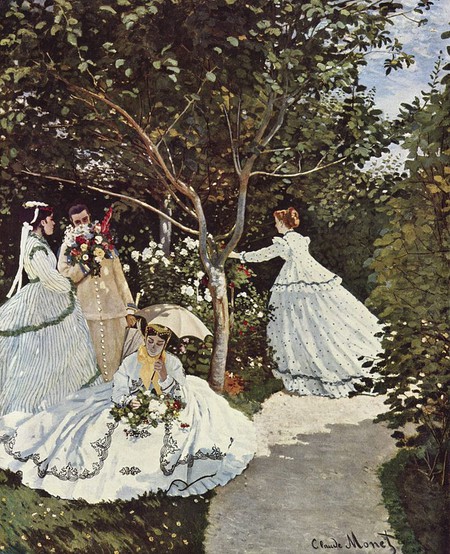 Women in the Garden | Claude Monet/WikimediaCommons

Women in the Garden

Women in the Garden is by no means one of Monet’s most well-loved painting. Critics at the time were concerned by what they saw as heavy brushstrokes – something that would eventually become an important part of the impressionist movement. Looking at it in retrospect, however, the ways in which the painting truly shines are a good indication of where Monet’s work would eventually go. He handles the light and shadow especially well, even down to his ability to give realistic texture to the women’s white dresses. 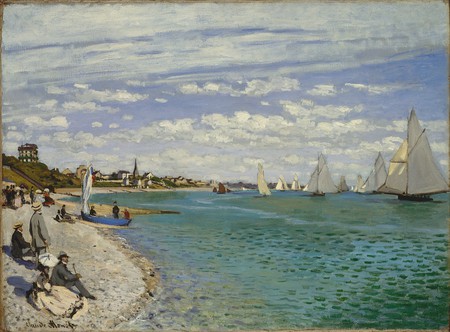 Regatta at Sainte-Adresse, which Monet painted in 1867, is as fascinating for the moment in Monet’s life when he painted it as for the subject matter. Despite the fact that his companion Camille Doncieux had his son Jean that summer, he was so poor that he had to spend the summer with his father in Sainte-Adresse, a wealthy suburban area. In order to try to raise his stock, he was working on many paintings at the same time, including this one, which distinctly shows two slices of life – the wealthy people both attending and taking part in the regatta, and then the lower class fisherman pulling their boat up onto the beach. 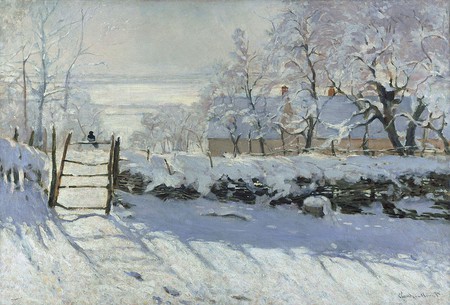 In the second half of the 19th century, many of the Impressionist painters spent a lot of time painting snowy winter scenes. The Magpie is Monet’s biggest out of about 140 snowy landscapes, and you can find it at the Musee d’Orsay in Paris. The most notable part of the painting are the blue colored shadows that stretch out from the fence, as this would eventually become very closely tied to the movement as a whole. The focal point of the painting is the black magpie perched on the gate; because there are no human figures present, the bird has his day. 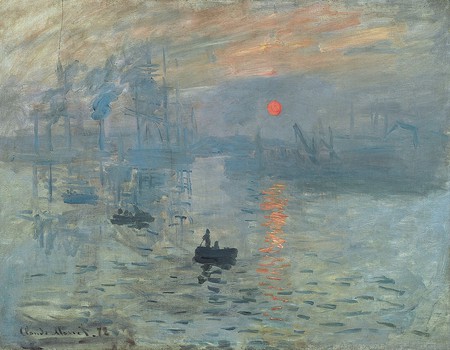 Painted in 1872, Impression, Sunrise is the painting that gave its name to a movement. Monet completed it in his hometown, the port city of Le Havre. When asked for a title, he didn’t feel that calling it a ‘view’ of the city would be a correct description, so he called it an impression, intending to convey that it showed the idea of the city but not its specific elements. It would eventually appear in the April 1874 Exhibition of the Impressionists, which was called that because it displayed the artwork of numerous Impressionist painters all together. 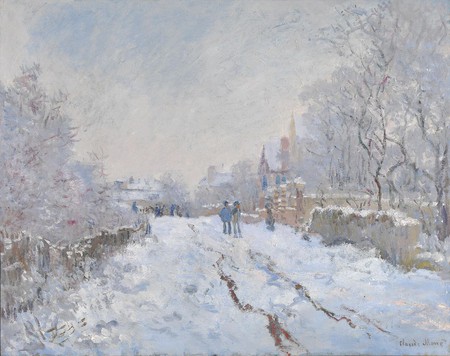 Another snowscape about five years removed from The Magpie, Snow at Argenteuil shows a little bit of Monet’s development as an artist when you compare it with that earlier work. The lines are not as crisp, the light and shadow of the snow blends and flickers more, and the elements on the ground almost blend into the sky. This is another one of his larger snowy landscapes, which can in part explain why he did not devote a lot of attention to the smaller details. Instead, the whole thing seems quite fluid. After many moves, this painting has now found a home at the National Gallery in London. 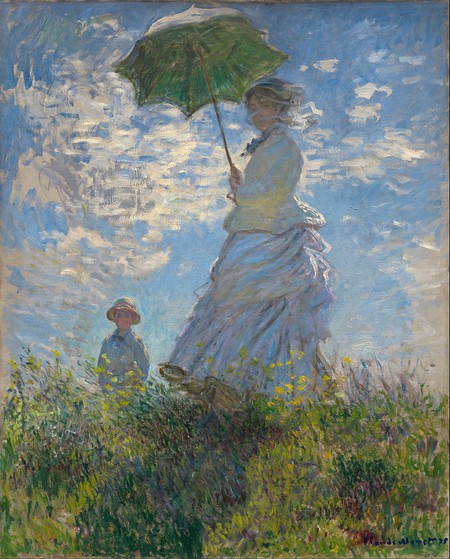 Woman with a Parasol | Claude Monet/WikimediaCommons

Woman with a Parasol

Although all of his subjects seem to be landscapes and plants, Monet would every once in a while devote a painting to people – specifically, in this case, his wife Camille and their son Jean. Looking just off their faces, the painting has a similar feel to a candid photo. Their expressions don’t belie any deep emotion, and the painting definitely conveys the feeling that the wind is blowing – it’s like Monet has just managed to take a snapshot with paint. Interestingly, Monet would return to a similar subject with more paintings of a woman with a parasol – although the next time, about a decade later, it would be his second wife’s daughter. 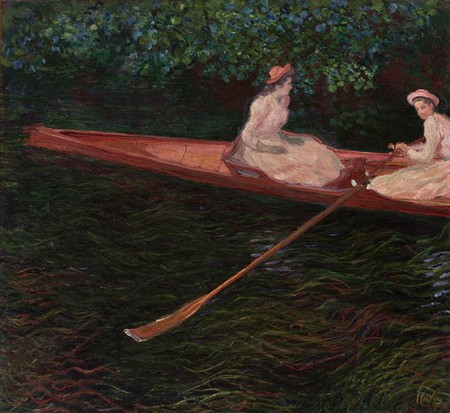 Boating on the River Epte

Boating on the River Epte is another example of Monet’s ability to seemingly create a snapshot in oil paint. This particular snapshot painting has the human subjects just in the top right corner of the piece, with the water actually playing the main role. The water was his main focus as an artist, and the way he manages to show its depth instead of just its surface was an ability that he would return to in his focus on water lilies and lily ponds later in life. The girls in the painting are his stepdaughters, one of whom would eventually be the new woman with a parasol. 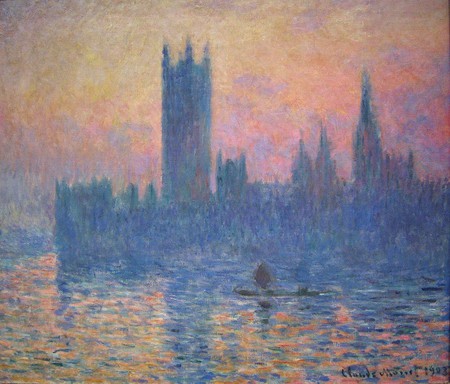 The Houses of Parliament | Claude Monet/WikimediaCommons

Between 1900 and 1904, Monet painted the Houses of Parliament in London 19 times, each in different weather conditions and times of day. The collection, which is now scattered across art museums and private collections all around the world, is an amazing study in light and color. Everything feels very natural, as varying weather and light conditions are something that everyone experiences every day. In some, dramatic sunsets create huge contrasts; in others, the Houses of Parliament – always depicted from the same viewpoint – are barely visible through the fog.

In 1908, Monet went to Venice. There, he found what he thought were the most gorgeous sunsets he had ever seen and a city that was, in his words, ‘too beautiful to be painted.’ Even so, he managed to create some pretty amazing paintings of the island monastery San Giorgio Maggiore, which he could see from the hotel where he and his wife were staying. In San Giorgio Maggiore at Dusk, the colors explode out of the painting and then reflect themselves in the water in muted but still stunning mirror tones – an advertisement for visiting Venice, as if that was ever necessary. 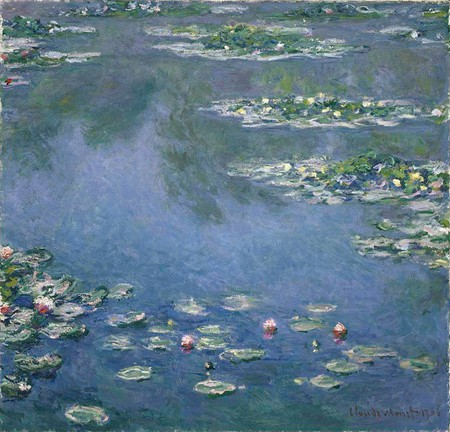 As he spent much of the last 30 years of his life painting variations of the water lilies in the pond in his garden in Giverny, it is no surprise that these paintings are what Monet is most well known for. As with his other series, he paints them in different lights and with different weather conditions. Although they are quite a bit closer up than, for example, the Houses of Parliament, it’s still clear when he was painting them on a foggy day or a clear one. The paintings now occupy museums around the world and have become some of the most influential and famous works of the 20th century.