10 Artworks By Pissarro You Should Know 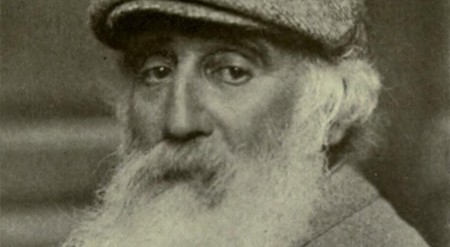 Born in the Danish West Indies (now the US Virgin Islands), Camille Pissarro moved to France to attend school when he was 12 years old. An Impressionist and Neo-Impressionist artist, Pissarro is noted for his outdoor scenes painted in en plain air. An incredible talent and a wise man with a kind soul, he was a mentor and father figure to many young artists, including Van Gogh and Cézanne. Like any artist, his work evolved over the years, so we’ve curated a list of some of his must-see paintings, starting with his early work and ending with his late pieces.

At the age of 21, Pissarro left his home and moved to Venezuela to focus on his painting full-time. For several years, he, along with his teacher Fritz Melbye, spent every waking moment painting everything in sight including houses, landscapes, villages, etc. One such work he created while in South America is the 1853 painting Paisaje tropical con casas rurales y palmeras, which shows a rural area with a couple of houses, inhabited by a sparse scattering of figures and animals. One of his earliest works, it is a good example of Pissarro beginning to find himself as an artist. Today, it is in the collection of the Galería de Arte Nacional in Caracas. 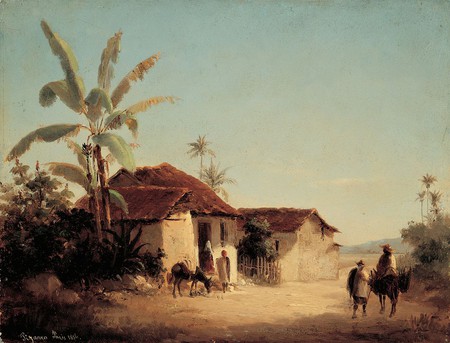 Depicting a pastoral French landscape, Jalais Hill, Pontoise, painted in 1867, was shown in the Salon of 1868. It was this particular piece that cemented Pissarro as an innovative rural landscape painter. In the foreground, viewers see a curved path with two women coming around the bend; behind them is the village dotted with houses. Inspired by artists such as Corot, Courbet, and Millet, Pissarro started getting out of the city (Paris) to visit the countryside, capturing its beauty on canvas. And while many artists of the time painted en plein air, they chose to finish their work in the studio; however, Pissarro finished his outside. Jalais Hill, Pontoise can be seen at the Metropolitan Museum of Art in NYC. 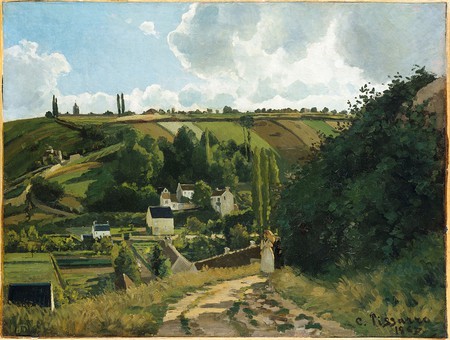 Once the Franco-Prussian war broke out in 1870, Pissarro and his family moved to the outskirts of London, to Norwood. While there, he painted as much as he could of the scenery and architecture around him, including the Crystal Palace. Built in 1851 for Hyde Park and designed by Joseph Paxton, the Crystal Palace was a beautiful glass-and-iron structure that was unfortunately destroyed in 1936. While the painting is known as The Crystal Palace, the building is not the main focal point. Located on the left side of the painting, the palace does have a strong presence; however, so do the people walking down the street with their families and the homes on the right. Today, The Crystal Place is in the permanent collection of the Art Institute of Chicago.

Hoarfrost of 1873 was exhibited at the first Impressionist exhibition in 1874 and is an excellent example of what the style entailed. Breaking away from the traditionally religious, mythological and historical subject matter, Pissarro, along with his contemporaries, were inspired by the countryside and the everyday lives of the people of the time. In Hoarfrost, the viewers see an everyday man doing his everyday job, working in the fields. The painting also reflects a departure from other traditional art practices such as the use of chiaroscuro – there is none in this work – plus the Impressionists used thick, expressive brushwork known at impasto, adding an intensity to the works. Hoarfrost, today, is located at the Musée d’Orsay in Paris. 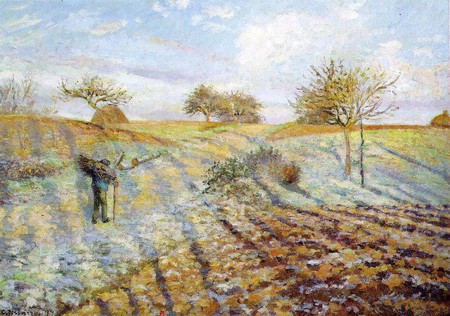 While known for his landscapes and cityscapes, Pissarro also painted portraits, or in this specific case, a self-portrait. Only creating four self-portraits throughout his life, this particular artwork from 1873 is the first such work, painted in a year that saw him practice his art, quite intensely, en plain air with Cézanne. Aged 43, he stares off to the side and looks wise beyond his years, which is probably why, along with his incredible talent, so many young painters turned to him for guidance and advice over the years. As with so many of Pissarro’s great works, this, too, is held in the permanent collection of the Musée d’Orsay.

Another incredible artwork found in Paris at the Musée d’Orsay, Red Roofs, corner of a village, winter of 1877 was featured in the Impressionist Exhibition of 1877 – Pissarro was the only artist to show in all eight Impressionist exhibits. Peeking through bare-branched trees are a series of whitish houses, side by side, topped with varying shades of orange-red and brown roofs. Beyond the houses are fields in shades of green and brown, adding an overall singular color tone to the work; however, the impasto technique allows light to dance on the surface, giving the painting depth. 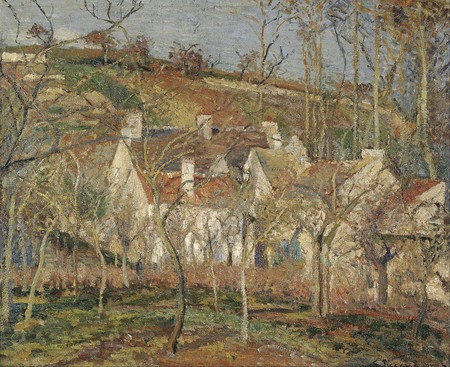 Located inside the Van Gogh Museum in Amsterdam, Haymaking, Éragny of 1887 features peasants collecting hay in the fields of Éragny, where the artist lived at the time. What is unique about this artwork is that it is done using the technique known as pointillism, something Pissarro experimented with for a short while. Painting dots of pure color to form an image and creating the look of blended colors, the use of pointillism created a dynamic artwork with a pastel tone, as if the sun was blanketing the land below. 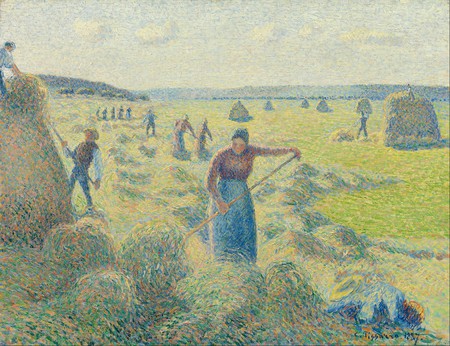 While Two Young Peasant Women was painted for an exhibition of Pissarro’s work, it did not sell, and Pissarro gave it to his wife, Julie Vellay. This work features two young peasants in the foreground, taking a break from their work, with the field and trees resting behind them. The focus is clearly on the two women – the girl on the left is Julie’s niece, Eugenie Estruc – as the large-scale figures fill up the canvas. As he played around with pointillism, Pissarro created his version, which was much less controlled and beautifully rendered in this piece. As the viewer will see, there is a hint of pointillism but not as pronounced when compared to the above artwork. See this in person at The Met. 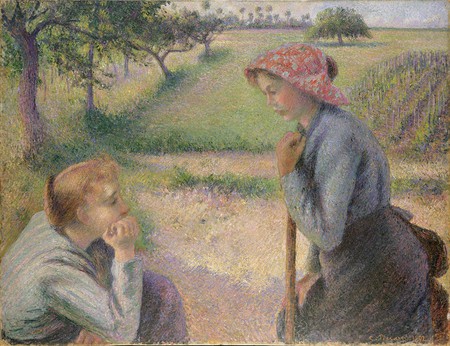 The Boulevard Montmartre on a Winter Morning (1897)

Pissarro did a series of paintings depicting the grand boulevards of Paris once he returned after spending several years in Éragny. Painted over several months and different times of the day, thereby adding a rich series of work to his already impressive oeuvre, these artworks have a way of showing viewers what urban life was like for many people at the time, with horse drawn carriages parading down the streets and people strolling along the sidewalks. Capturing the view from his hotel room, The Boulevard Montmartre on a Winter Morning highlights people going about their day on a cool, grey, overcast morning. This gem can be seen at the Metropolitan Museum of Art in New York City. 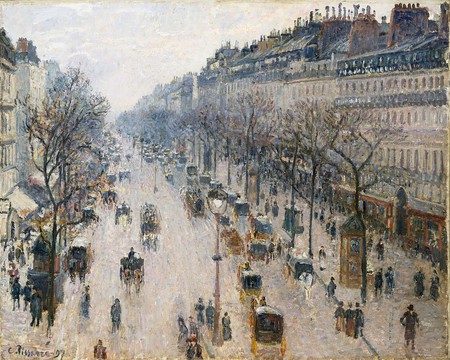 Camille Pissarro, The Boulevard Montmartre on a Winter Morning, 1897 | © Metropolitan Museum of Art/WikiCommons

Camille Pissarro passed away in 1903, making Afternoon Sunshine, Pont Neuf one of his last ever works. As Pissarro got older, he unfortunately developed problems with his eyesight, causing him to work indoors; however, this did not prevent him from painting outdoor scenes, which is clear from the work mentioned above. This painting is also an excellent example; painted from his room on the Île de la Cité, Pissarro caught a busy time on the Pont Neuf with people traveling between the department stores and their residences. His quick brushwork captured the energy of the bustling scene brilliantly. Afternoon Sunshine is currently on display at the Philadelphia Museum of Art.