10 Artworks By Cézanne You Should Know 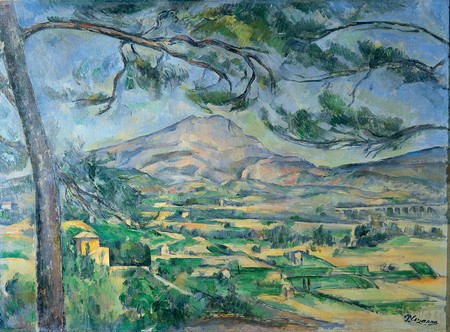 Monet called Cézanne “the greatest of us all”; to Picasso, he was the father of modern art; for Georges Braque, he was a key influence on Cubism. Cézanne threw away the convention of one-point perspective that had dominated painting since the Renaissance. He introduced multiple perspectives into a single canvas and looked at objects as sets of abstract shapes rather than through the precise detailing of naturalist painters. Here are ten of his most important works.

Now held in the Walker Art Gallery in Liverpool, The Murder comes from Cézanne’s “Dark Period” during the 1860s. It depicts two figures attacking another, who lies on the ground, arms outstretched. One figure has its back tuned to the viewer, one arm raised as if to strike a further blow, while the other presses down upon the victim with both hands. At this point, Cézanne relied on heavy, dark, brooding colors in his compositions. Though based in Paris and acquainted with the Impressionists, The Murder shows the influences of Romantic painters like Géricault and Delacroix in its dramatic intensity. It may have been influenced by the novel Thérèse Raquin by Cézanne’s school-friend Emile Zola, in which the heroine murders her husband. 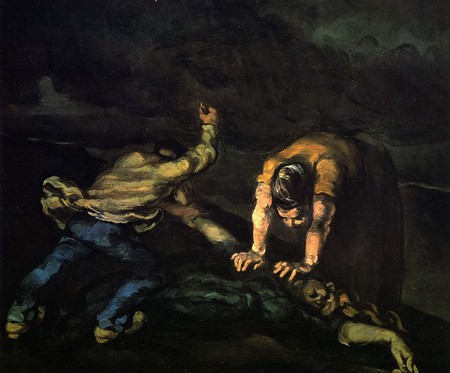 During the 1870s, Cézanne divided his time between Paris and his native Provence. He became very close to the great Impressionist Camille Pissarro, who exercised a strong influence upon Cézanne who began to use warmer colors and to paint outdoors. The Pool at Jas de Bouffan of 1876 shows Cézanne moving towards a more Impressionist style – he exhibited at the first and third Impressionist shows of 1874 and 1877. The Bastide at Jas de Bouffan was the home of the Cézanne family in Aix-en-Provence from 1859. Paul painted indoor murals and the house itself many times, and he had his studio here from 1880. The painting is held at the State Hermitage Museum in St. Petersburg. 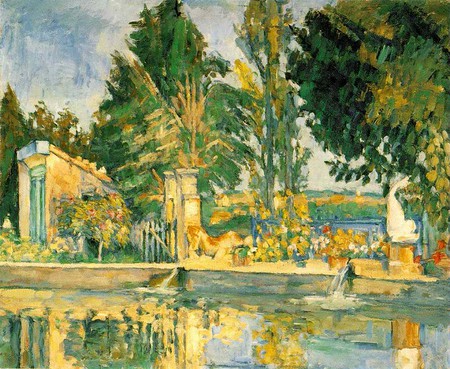 Cézanne rarely used professional models when painting human figures. One exception was for his series of paintings of a boy wearing a red waistcoat, when he used the Italian Michelangelo di Rosa. The most famous of them is of the boy with his elbow rested upon the table in front of him, eyes set upon a sheet of paper. It is essentially a demonstration of color and complementing forms – the red of the waistcoat, the blue neckerchief and waistband, and the diagonal lines of the boy’s arched back, the curtain behind him, his bent elbow and long right arm all chiming with one another in the composition. In 1985, the critic Gustave Geffroy even described it as good as any work of the Old Masters. It’s now held in Foundation E.G.Bührle in Zurich and valued at $109 million. 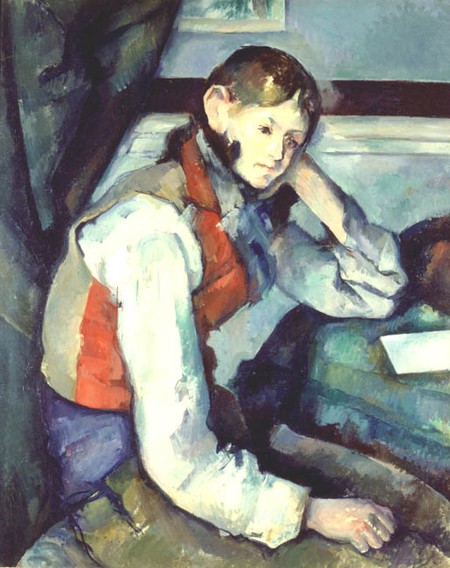 L’Estaque is a small village close to Marseilles, and one of two places Cézanne painted over and over. He wrote to Pissarro in 1876 that ‘the sun is so vivid here that it seems to me that objects are always outlines.’ This was perfect for Cézanne in his exploration of abstract shapes and color. L’Estaque with Red Roofs shows off Cézanne’s interest in extraordinary colors like burning golds and cerulean blues. But look at the roofs and you’ll see a direct link with the great Cubist Georges Braque who came to L’Estaque in 1907, inspired by Cézanne. He painted landscapes, trees, houses, and viaducts that clearly show the influence of Cézanne. 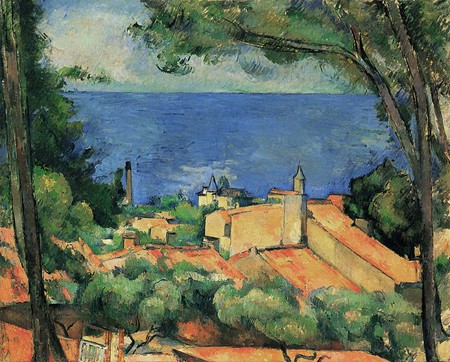 Mont Saint-Victoire is the other landscape associated with Cézanne. He could see the huge limestone ridge from Aix, and he returned to it as a subject time and time again, especially in his later years in the 1890s. The mountain became his backdrop, foregrounded sometimes by plains, sometimes by houses, the railway, or pine trees. In some pictures, the trees are green; in others, the Provencal landscape is honey-gold in the sun. What the Mont Sainte-Victoire paintings show so well is Cézanne’s famous doubt and lack of a single unifying perspective – they’re indistinct not definite images, full of hesitations and exploratory brush-strokes; the painter becomes not the master of all he creates but is affected with uncertainty of what he sees.

Cézanne painted Provencal peasants playing cards in five slightly different compositions. Perhaps the most famous is that in the Musée d’Orsay in Paris, which is also the smallest and last of the series. All show sitting men simply concentrating on the small cards in front of them, silent and focused, just as the painter himself is concerned with the canvas in front of him rather than the world around him. Cézanne was likely inspired by 17th century genre paintings, of which he could have seen paintings of card players by the Le Nain brothers in the museum at Aix. One of the five Card Players series was sold in 2011 to the Qatari royal family for nearly $300 million, the second most expensive painting ever sold. 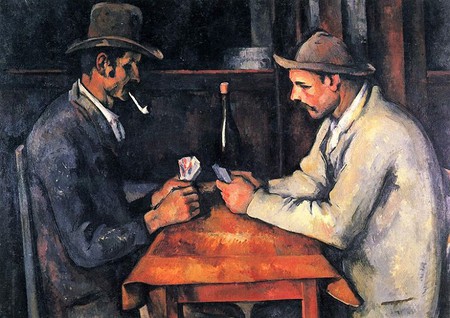 This is the most expensive still life ever sold when it passed through the Sotheby’s saleroom in New York in 1999 and went for $60.5 million. It’s also one of Cézanne’s finest still lifes – an early owner was Paul Gauguin. The still-life genre was ideal for Cézanne in his explorations of the hidden shapes and forms behind objects and the multiple perspectives people experience rather than an imitation and dull copy of things. In Jug, Curtain and Fruit Bowl, the viewer sees a dark curtain, a white tablecloth, a fruit bowl, and apples, oranges and pears that merge and melt into the cloth, bowl and one another. Each object is a subject in itself, a study in color and shape. 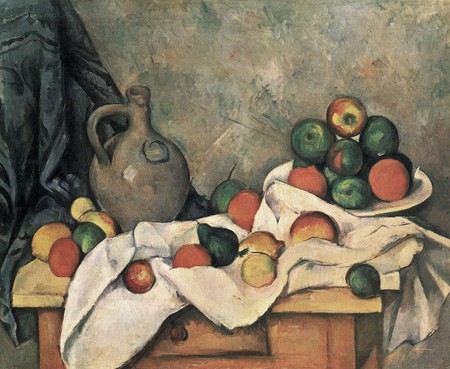 Another of Cézanne’s great still lifes and an excellent illustration of how he could dispense with a single overarching perspective within a painting is Still Life with Curtain and Flowered Pitcher. At first glance, viewers see a table upon which are a jug, two bowls of oranges, some apples, a long white cloth and a patterned curtain. Look closer though and all is not as it seems – some pieces of fruit seem to sink into the table, the central bowl tilts towards the viewer while the table is flat, and the left corner of the table is at the wrong angle to the rest of the image. What you’ll find is conflicting perspectives in one image. The Russian collector Ivan Morozov bought the painting at the Cézanne Retrospective of 1907, and from his collection, it came to the State Hermitage Museum in St. Petersburg. 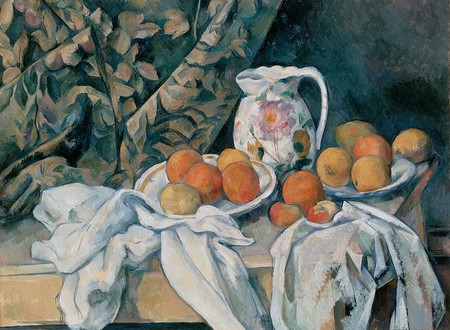 The Bathers, or, more precisely, Les Grandes Baigneuses, is held now by the Philadelphia Museum of Art. In his last years, Cézanne produced a series of works on the subject of nude bathers. To some critics, Les Grandes Baigneuses represents his finest work even though it’s disputed whether it was finished despite Cézanne having worked on it for seven years. The Bathers belongs to a long tradition of nudes in the landscape that begins with Titian and Poussin, with their nymphs and satyrs. But Cézanne ditched their classical mythological content for more abstract figures that prefigure the famous Demoiselles d’Avignon of Picasso and the Swimmers of Matisse. 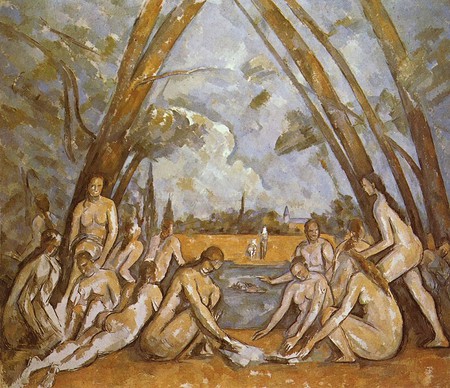 Pyramid of Skulls is a depiction of four human skulls, arranged in pyramidal form against a dark background. Only the skulls dominate the canvas in a way unlike the objects in many of Cézanne’s still lifes are arranged. Skulls had long been a staple in the artist’s lexicon as a memento mori, ever since the days of Holbein and Poussin. Cézanne used skulls in several still lifes from the mid-1890s onwards, in amongst other items. Poor health and the death of his mother in 1897 induced melancholia and a brooding upon mortality. But with Pyramid of Skulls, Cézanne also brings his obsession with the mass and form of the skulls that lifts it beyond a conventional artistic meditation on death. 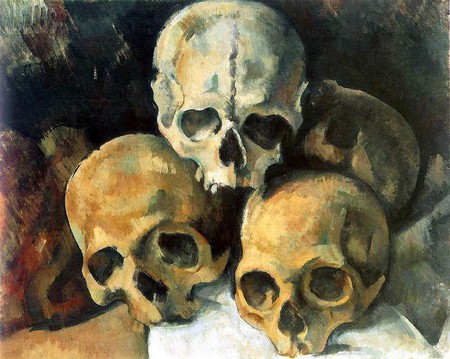 Paul Cézanne, Pyramid of Skulls, 1901 | © Private Collection/WikiCommons
Give us feedback