Top Things to Do in Finnish Lapland 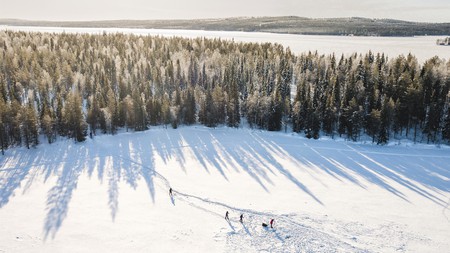 Come to Lapland for the Christmas village; stay for the unspoilt views and diverse wildlife

Occupying around a third of Finland, as well as parts of northern Sweden, Norway and Russia, Lapland (known as Sápmi by the region’s indigenous population) is Europe’s largest remaining wilderness.

Lapland lies almost entirely within the Arctic Circle, meaning it’s covered in a thick blanket of snow for six months of the year and illuminated by 24-hour daylight in summer. Its vast expanses of coniferous forests, glistening lakes and ancient fells can be explored through a whole host of outdoor pursuits, including hiking, ski trekking, husky sledding and snowmobiling. If you’re lucky, you may even catch a glimpse of the Northern Lights. To give you a taste of the exhilarating experiences on offer, we’ve curated the top things to see and do in Finnish Lapland.

Keen to visit? You can experience the best of Finnish Lapland while staying on a private island on Culture Trip’s exclusive five-day trip, led by our local insider. 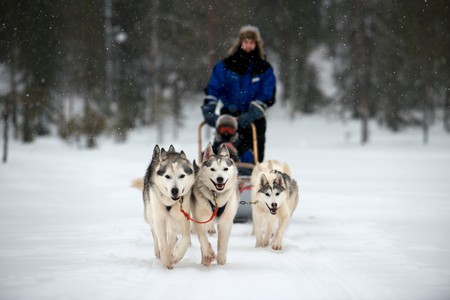 Whether you only want to travel a few kilometres or do it for days on end, there’s a husky sledding experience that will fit your needs

One of the most thrilling ways to appreciate Finnish Lapland’s scenery is to glide across the wilderness on a sled pulled by huskies. There are hundreds of tour operators throughout the region offering trips ranging from a few kilometres to multi-day experiences. Most offer hotel transfers, while some also provide winter clothing. On many tours, you’ll spend time with the huskies beforehand and learn about their role in the region and how they are bred, trained and looked after. It’s always worth doing some extra research to ensure you’re using a provider with a comprehensive ethical policy. 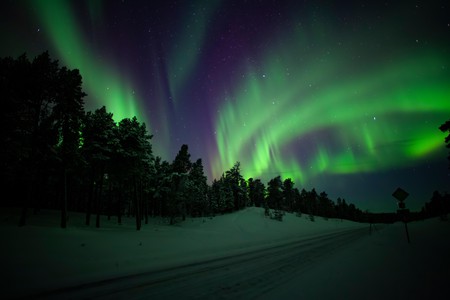 If you’re visiting Finnish Lapland between late August and early April, you’ve got an excellent chance of spotting the Northern Lights. There’s no guarantee, since you’re reliant on clear skies and solar activity, but they’re visible on roughly 200 nights a year, making it one of the most reliable parts of Europe to observe the phenomenon. At first, you may only see grey ribbons dancing across the sky but, on a good night, expect vivid shades of green. You can join an organised tour, though sometimes you only need to look up and admire nature doing its thing. 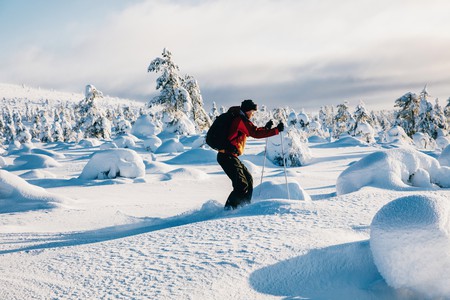 If you’re up for an adventure and keen to discover the pristine beauty of Finnish Lapland on foot, ski trekking is the way to go. Unlike Alpine skiing, this type of backcountry skiing mostly takes place in ungroomed natural spaces and doesn’t take much practice to get the hang of. Think of it as winter hiking, but with specialist equipment to help you navigate the snowy terrain. The skis tend to be slightly shorter than what you’d use for downhill skiing and your boots aren’t fully locked into the bindings, leaving your heels free.

A half-day ski trekking adventure is included as part of our specially curated, five-day Finnish Lapland trip, along with a barbecue lunch and a sauna afterwards. 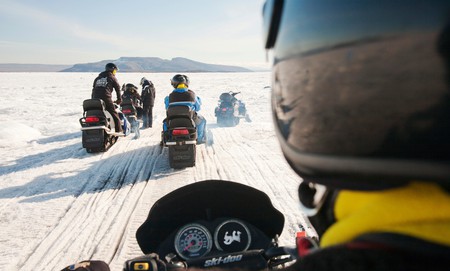 Since being developed in the 1930s, snowmobiles have become one of the most important modes of transport in Finnish Lapland, facilitating fast, long-distance travel in even the harshest conditions. Zipping across frozen lakes and icy fells, and through snow-covered forests, is an unforgettable experience whenever you decide to go. That said, joining a night tour, and combining it with trying to spot the Northern Lights, is particularly special. Generally, you need to have a driving license and be at least 15 years old to drive a snowmobile in Finland, but always check the rules of whichever company you use. 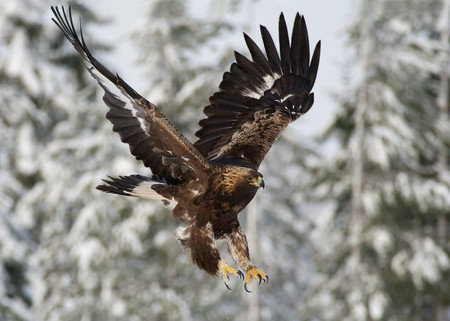 Did you know that reindeers outnumber humans in Finnish Lapland? That means you’re almost guaranteed to see them, whether they’re roaming in the wild in search of food or at a reindeer farm. They’re an essential part of the indigenous Sámi way of life and every reindeer has an owner. Brown bears, lynxes, wolverines, arctic foxes and golden eagles are among the other animals worth keeping a close eye out for, be it on a dedicated wildlife safari or while exploring the wilderness.

Lapland boasts a proud culinary heritage, heavily based around natural produce foraged from the region’s lakes, woodlands and rivers. Fresh fish – such as arctic char, salmon and trout – features prominently in traditional Lappish cuisine and is often cooked by an open fire or smoked, giving it a strong, earthy flavour. You’ll also come across plenty of reindeer and mushroom-based dishes, typically served with a side of almond potatoes, which are unique to northern Scandinavia. Leipäjuusto (a soft cheese dessert usually served with cloudberry jam) and rieska (a type of barley flatbread) are both must-try regional specialities. 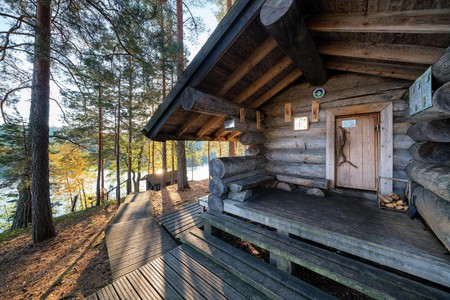 No trip to Finland is complete without visiting a sauna

No trip to Finland would be complete without spending a healthy amount of time sweating it out in a sauna. It’s an integral part of Finland’s cultural heritage and, no matter where you stay on your Lapland adventure, you’ll never be far away from a sauna. There are three main types – wood-burning, electric and smoke saunas – and they’re typically heated to between 80-90C (176–194F), providing an array of health benefits. What better way to cap off a day braving the cold in Lapland? Also, it’s customary to sauna in the nude, so don’t be shy. 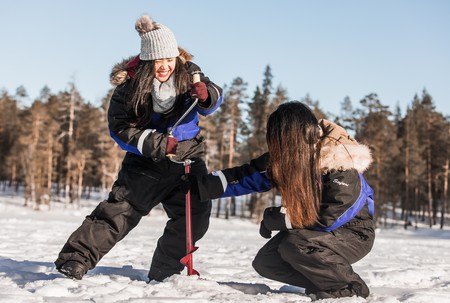 Just like the sauna, ice fishing is an essential part of Finland’s national identity. In Lapland, lakes begin to freeze over in November and, by January, many are solid enough to walk, ski and snowmobile on. Anyone can go ice fishing if they have the gear, although you may feel more comfortable joining an organised trip to learn from the locals. More than just a pastime, many regard it as a form of meditation. After all, drilling a hole in the ice and patiently waiting involves totally tuning into nature and detaching yourself from the stresses of everyday life.

While unspoilt nature is Lapland’s primary appeal, the capital, Rovaniemi, shouldn’t be overlooked. Having been almost entirely destroyed during the Second World War, it was redesigned with input from renowned Finnish architect Alvar Aalto in a configuration resembling a reindeer’s head. Beyond being a convenient travel hub and gateway to the wilderness, it contains several fine examples of modernist architecture, including the city hall, city library, Lappia House and Arktikum science museum. Most of the restaurants, bars and shops are clustered around Lordi’s Square, named after the Finnish rock band, Lordi, who won the 2006 Eurovision Song Contest. 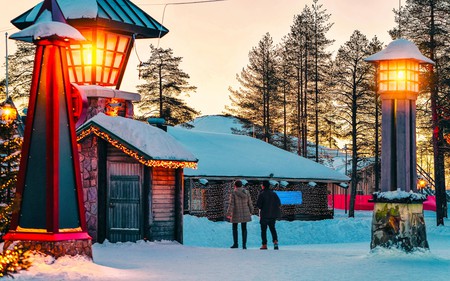 Whether you’re planning to visit Finnish Lapland in the depths of winter or the height of summer, the festive spirit remains alive throughout the year at Santa Claus Village – although it’s especially magical to visit around Christmas time. It’s open every day of the year and entry is free. You can visit a husky or reindeer park, try snowmobiling, hunt for handcrafted souvenirs, and enjoy the extensive choice of bars and restaurants. Don’t miss the chance to snap a photo standing directly on the Arctic Circle.