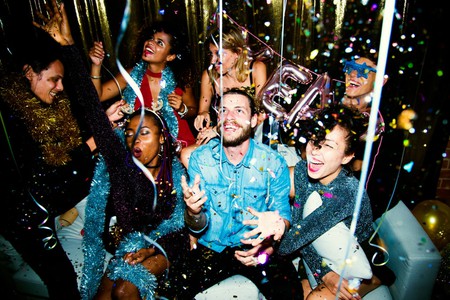 With just a few days left before New Year’s, we use this time to look back on all we’ve experienced this year and think about what we hope to accomplish in the 12 months ahead. But before we embark on our resolutions, it’s critical to take an evening to celebrate all of the wonderful people and opportunities that we’ve been blessed with—and maybe drink a glass or two of champagne. So as the clock ticks down to midnight, we have to answer one question: with what song do we ring in 2018?

As is its wont to do, the internet has spent days pitching the perfect track to play this holiday, going as far as to tell readers the exact time the song should be started so as to pair the song’s best moment with the passing of midnight to the second.

“If you play Gimme More by Britney Spears at exactly 11:59:59 on December 31st, you’ll hear “It’s Britney Bitch!” as the clock strikes midnight. Enter 2018 the right way,” one twitter user suggests. Among other iconic lyrics proposed was the first “wake me up” of Evanescence’s hit Bring Me To Life, the first “oh, ah-ah-ah-ah!” of Disturbed’s Down With The Sickness, and the first “hey now” of Smash Mouth’s All Star.

if you play "bring me to life" by evanescence at exactly 11:59:08 on new years eve, the first "wake me up" will play at exactly midnight. start off your new year right

if you play “down with the sickness” by disturbed at exactly 11:59:29 on new year’s eve, the first “oh ahahahah” will play exactly at midnight…start your 2018 off right:))

if you play all star by smash mouth at exactly 11:59:22pm on december 31, the first "hey now" will play at exactly midnight
start off your new year right

Others took a slightly more bizarre approach, like offering The Killers’ Mr. Brightside so that “you can start your new year by coming out of your cage,” or opting for the Stranger Things theme song so that you will be convinced that you’ve been transported to the Upside Down instead of a new year.

One user suggested playing Luis Fonsi and Daddy Yankee’s song of the summer Despacito so that it ends a second before 12 o’clock and can therefor be left behind.

BuzzFeed’s Gina Rushton worked out how to sync up the stroke of midnight with the video of alt-right posterboy Richard Spencer being punched in the face. It might not be a song, but he is a terrible person, so if you’re looking for a visual companion, this might be a great fit.

if you play Mr. Brightside by The Killers at 11:59:47pm on December 31st you can start your new year by coming out of your cage

if you play "white nationalist Richard Spencer gets punched in the face camera while doing interview" on December 31st at 11:59:27 the punch will play right as the clock strikes midnight. Start off your new year right.

Even the legendary Phil Collins got in on the meme, nominating the epic drum solo on his own track In The Air Tonight. However, as divine a moment as this is, there is only one song that is truly worthy of soundtracking our first moments in 2018.

If you play 'In The Air Tonight’ by Phil Collins on December 31st at 11:56:40 the drum break will play right as the clock strikes midnight. Start off your new year right.

Hailing from Tukru, Finland, it’s unlikely you will recognize the name Toni-Ville Henrik Virtanen, but he’s been a pretty significant part of your life ever since he released his climacteric song Sandstorm in 1999. That’s right: he’s Darude.

In our opinion, to achieve the most euphoric results, it is best to line up the second drop of the song’s radio edit with midnight. While you could start Sandstorm at 11:57:31 on New Year’s Eve, catching the first drop along the way, beginning at the 1:27 mark in the song at 11:58:58 provides a shorter and more fitting build and release that your party deserves.

But don’t take our word for it. Just watch how Darude and the people of Helsinki ushered in 2017 below.