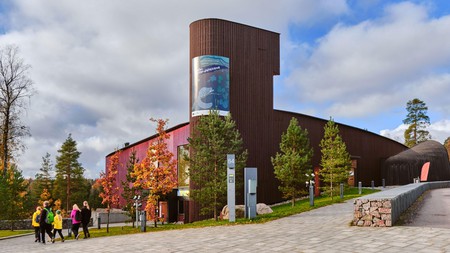 Helsinki is on a mission to become carbon neutral by 2035. Between ambitious sustainability plans in restaurants and cultural spaces, and green everyday activities such as hiking and mushroom hunting, the capital of Finland is nearer to that goal than ever. Helsinki Marketing has also put in place several green initiatives to help steer residents and visitors towards an ecofriendly mindset. Follow our guide and discover all the ways to explore the greener side of Helsinki.

Few things are more calming than the lush nature of Helsinki. The city is surrounded by beautiful parks and forests, and the foliage becomes strikingly orange during the autumn months. The Finnish love their green spaces, and one of their favourite pastimes is foraging for mushrooms and berries. While berry hunting takes place in the spring, and is unavoidably accompanied by mosquitoes, autumn is a great time to pick mushrooms without being undisturbed by tiny bloodsuckers.

Visit Nuuksio National Park and look for funnel mushrooms clinging to the roots of the tall, slender trees. When fried, they make a delicious, creamy mushroom sauce for pasta. Be careful, though, there are about 100 species of edible mushroom in Finland, but many others are poisonous, so you might need to consult an expert before picking them. Watch out, in particular, for the deadly destroying angel (yes, that is its name). Pop into the Finnish Nature Centre Haltia to learn all about the Helsinki wilderness and enjoy lunch in a tipi. 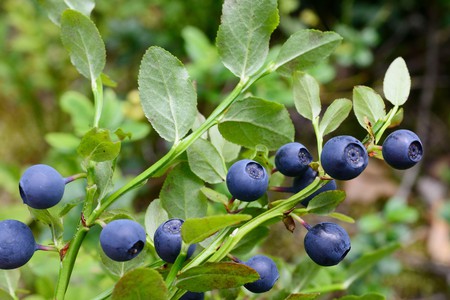 Hop on a ferry to Vallisaari island

Next to the Unesco-listed island of Suomenlinna lies Vallisaari, undoubtedly the greenest of the 328 islands off the coast of Helsinki. While most of these are densely forested, Vallisaari is different in that its nature remains completely untouched. Formerly a military island, it only became accessible to the public in 2016, with parts still off limits to visitors. In the summer of 2021, Vallisaari hosted the Helsinki Biennial, a strictly ecofriendly exhibition where the carbon footprint of the event was calculated and the artworks interacted with nature without affecting the biodiversity of the region. If you decide to visit the island, stick to the marked trails at all times, and bear in mind that the terrain is uneven and not always stable. There is a cafe, and tours are offered in the summer. 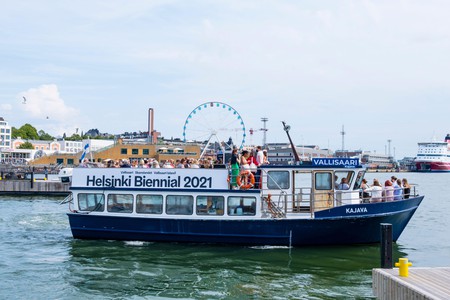 In the summer of 2021, Vallisaari hosted the Helsinki Biennial | © Peter Forsberg / Europe / Alamy

Explore the many green museums and art spaces

Helsinki is making strides when it comes to turning its public spaces greener. A new tool by Helsinki Marketing, called Think Sustainably, will show you which of these are embracing sustainability, and to what extent. In addition to the Helsinki Art Museum, which organised the super-green Helsinki Biennial, many more museums and cultural spaces are now contributing to a more sustainable future.

The impressive Oodi library, with its futuristic facade, has invested in wood as a building material, while trying to waste as little energy or paper as possible; you will see few brochures distributed here. At the same time, the Espoo Museum of Modern Art aims to reduce its carbon footprint by auditing its electricity and heating consumption and focussing on renewable energy sources instead. Staff are encouraged to reuse packaging materials and avoid printing. Some of the art workshops here feature sustainable materials, too – such as salt, used for painting. 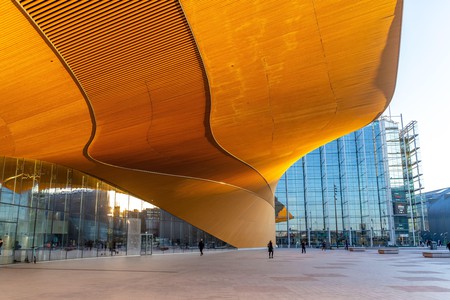 The Oodi library has invested in wood as a building material, and has a striking facade made of timber | © Subodh Agnihotri / Alamy

The Finnish capital is replete with second-hand shops, as well as boutiques selling all kinds of clothes and interior design items, while urging consumers to be more responsible when shopping. One such store is Glasshouse Helsinki, which also doubles as an exhibition space. According to their mission statement, it’s “where the disciplines of art, design fashion and material science merge with companies acting for responsible growth”. Their aim is clear: convince people to buy less and keep their things longer. All their products are ecofriendly, and they pay extra attention to where each comes from plus the carbon footprint of shipping. Their exhibitions convey how design can advance environmental, social and economic sustainability.

Then there’s Lovia, the concept store that commits to “transparency DNA” by providing consumers with a code that reveals the origins of each item. The store creates design accessories using leftovers from other industries. You can actually see the production process at their showroom, where you will find the original material sources on display next to the finished products.

Have dinner at the zero-waste Nolla Restaurant

Aptly named Nolla, meaning zero in Finnish, does not mess around when it comes to waste. In fact, everything here, from the food to the waiters’ clothing, is sustainable. The three owners are chefs – one Spanish, one Portuguese and one Serbian – who grew up close to nature and wanted to put their waste-free ideology to good use.

In 2019, they opened Nolla, and they’ve since been working with local farmers, serving only seasonal food and creating their daily menus based on the available ingredients. They recycle cardboard, bottles and a bit of plastic; their plates are made from recycled clay; their soap from frying fat; and the lamps from acoustic barrels. They also make their own alcohol and beer. The most amazing part of the restaurant has to be Lauri, a composting machine that converts biowaste into dry soil in 24-hour cycles. The food itself is more than delicious – don’t miss the grilled romaine salad with chilli sauce.

Cycle around the city

Finland has committed to reducing transport emissions by at least 50 percent by 2030, and it seems Helsinki is already on the right track. Walking, cycling and public transport account for 77 percent of all journeys in the city, with cycling routes covering 1,500km (932mi). Pick one of the 4,600 available bikes from one of 460 bike stations in Helsinki and Espoo and cycle your way around museums, landmarks and parks. The Helsinki bike-sharing programme, which was introduced in 2016, has the highest user rate in the world. It’s worth cycling along the Baana, a former railroad track that’s now a cycling pathway, which runs from the Kiasma Contemporary Art Museum to the Ruoholahti district, or along the seaside bike lane that runs from the Market Square to the former power plant Suvilahti. 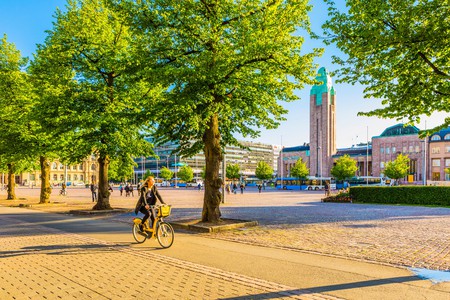 Walking, cycling and public transport account for 77 percent of all journeys in Helsinki | © robertharding / Alamy

Stay at Marski by Scandic 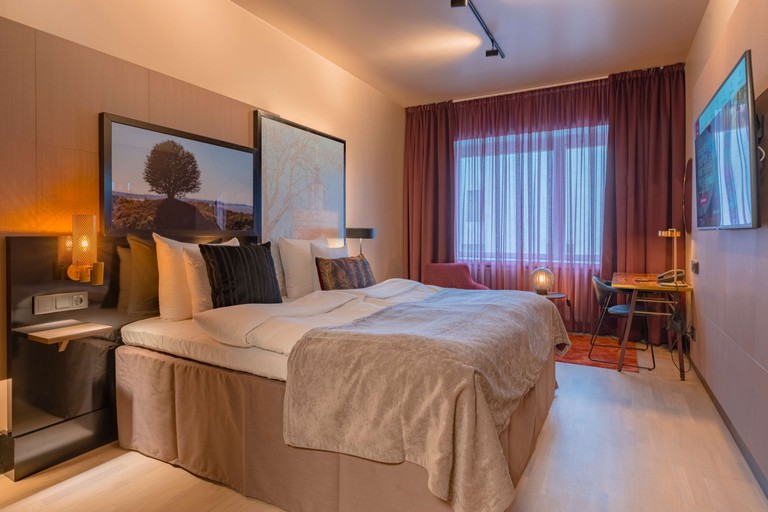 Courtesy of Marski by Scandic / Expedia
Marski by Scandic is your best bet when it comes to making the most of Helsinki. The hotel is right in the city centre, with the Rock Church, the Helsinki Cathedral and Sibelius Park all just a few minutes away. Atmospheric lighting, burgundy furnishings and gold lamps welcome you to regal-looking rooms, while there’s a buzzing bar that’s the place to be on Friday and Saturday nights. The hotel is also on the green side, with bed linens made of ecofriendly fibres and napkins made of recycled plastic. Embrace the Finnish way of living with a visit to the sauna.

Getting here as responsibly as possible

More often than not, flying is a necessary evil; still, a number of airline companies have been trying their best to become as green as possible. Finnair aims to become carbon neutral by the end of 2045, starting with cutting its net emissions by 50 percent by 2025. The company has also tried to make its in-flight food more sustainable, serving just the right amount so that it doesn’t go to waste, and opting for wooden packaging instead of plastic. A big part of their fleet is currently going electric, and they are investing more and more in biofuel. Interestingly, one of their planes has just been recycled, with many of its aluminium parts now turned into cans.

Finnair flies from London Heathrow to Helsinki with fares from £162, including all taxes and charges. Customers flying with Finnair from the UK can also enjoy quick and convenient connections from the Finnish capital to destinations across Europe, Asia and the Far East. For full terms and conditions, visit finnair.com or call 0208 0010 101.