By the time the Olympics arrived in Helsinki in 1952, Emil Zátopek was the world-record holder and favourite for his two events. But it was what he achieved afterwards that makes him one of the greatest athletes of all time.

At London 1948, Zátopek had won gold in the 10,000m and silver in the 5,000m. In the 10,000m he finished 48 seconds clear of second place. In the four years immediately after, Zátopek broke his own world record in the same event five times.

In Helsinki, the Czech runner went on to win gold medals in the 5,000m, the 10,000m and the marathon. Even ignoring the fact that his feat had never been achieved before, or even since, it is the marathon that stands out. A huge name in long-distance running, Zátopek was imperious on the track, but the marathon he won just happened to be his first ever attempt at the race. He only decided to run it a matter of days before.

His tactics for the marathon were basic. The British world-recorder holder, Jim Peters, would be in the race and Zátopek would simply race alongside him. The pace of the first 15km was quick enough to affect Peters and his Czech rival asked him about it. In an attempt to break his new rival, Peters told Zátopek that it was ‘too slow’, forcing the Czech man to accelerate off into the distance. 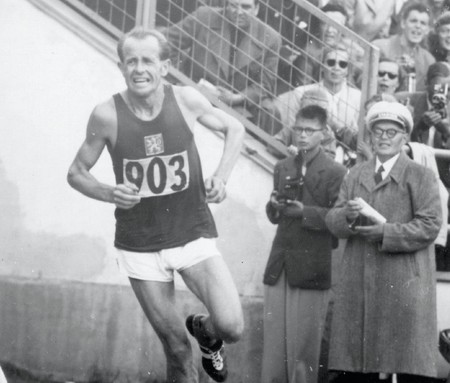 Helsinki 1952 - Emil Zátopek entering into the stadium at the end of the marathon, under the spectators sight.

Peters’ plan backfired; rather than bringing him to his knees Zátopek won the race, spending the second half chatting with a car full of photographers as he ran. Destroyed by the early pace, the British athlete couldn’t even finish the event.

Incredibly, Zátopek wasn’t a natural runner. His awkward style and noticeable wheezing were at odds with his level of performance. While working in a factory as a 16-year-old, he was forced to run in a local race by the sports coach. After claiming he was ill and in no state to run, Zátopek was sent to a doctor who gave him the all clear. With no choice but to race, he finished 2nd out of 100 competitors and an athletic career had begun. He joined a local club and within weeks he had developed his own training plan.

Zátopek’s training methods have become an important part of his legend. He often trained in army boots, as well as in the snow and heavy rain, believing that it made racing itself more of a relief. He was a huge fan of repetitive, relentless sprints, on one occasion running the 400m 100 times in one day, 50 in the morning and 50 in the afternoon. 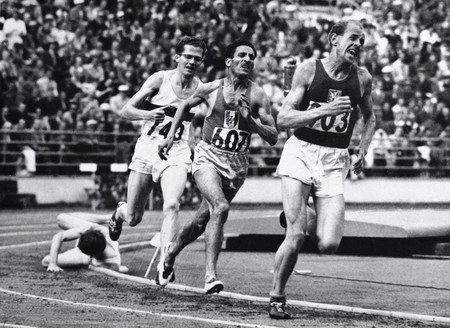 Zátopek’s willingness to compete, as well as his physical capabilities, were staggering. His first ever international race was an inter-Allied event in Berlin. With no clear method of getting there from Prague he eventually decided that he would cycle the entire 220-mile journey, which he did, before winning the race and heading back home.

Richard Askwith, the author of ‘Today We Die a Little: The Rise and Fall of Emil Zátopek, Olympic Legend’ talks of Zátopek saying: ‘When you can’t keep going, go faster.’ The title of the book itself is something he said to a competitor on the start line of a race when he was nearing the end of his competitive running career, fully aware of the toll competing took on his body.

But it is not simply Zátopek’s athletic prowess that was revered. He spoke six languages, and would often chat happily to opponents during races. Fred Wilt, an American rival in the 10,000m, labelled him ‘perhaps the most humble, friendly and popular athlete in modern times’. 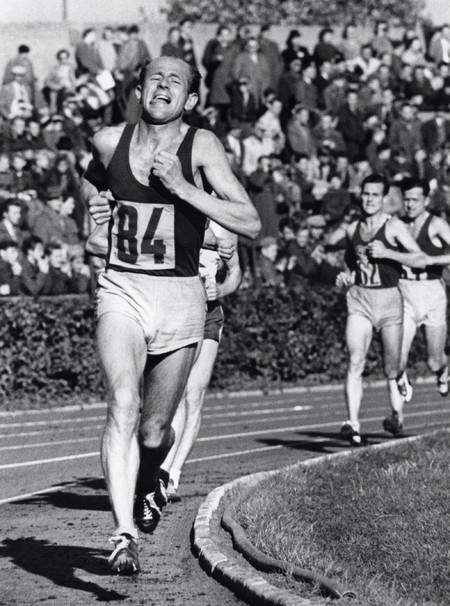 Unfortunately, Zátopek’s life after the track took a more depressing turn. His fame and status in his home country ensured he was an influential figure with the Communist Party, but he was a staunch supporter of their democratic wing. When the Prague Spring saw him booted out out the party and the army, Zátopek was sent into exile and made to work in remote parts of the country doing labour-intensive jobs, working for a drilling company and digging for uranium. Eventually, after the Velvet Revolution in 1989, he was welcomed back to Prague, where he lived until his death in 2000.

Today, in the Czech Republic and beyond, Zátopek now gets the respect his life deserves. At the Rio Olympics, 16 years after his death, every Czech athlete will wear a Zátopek symbol on their shirt. It is a belated acknowledgement of his incredible feats as an athlete, and the manner in which he achieved them.