Getting Festive at the Official Home of Santa Claus in Rovaniemi, Finland

The ultimate winter wonderland in Lapland. Reindeer rides are just part of the fun you can experience in the official home of Santa. | © Culture Trip

Rather than wait for the perfect Christmas experience at ho-ho-home, why not head out to the capital of Finland’s northernmost province and visit Santa in the city of Rovaniemi in Lapland? Here’s how to make the most of a trip to the ultimate winter wonderland.

The official hometown of Santa Claus is open all year round and sits on the edge of the Arctic Circle. Annually attracting over 500,000 visitors from all over the world since it was officially listed as the workplace of Father Christmas in 2010, Rovaniemi boasts a number of attractions that are unique to this part of Finland. 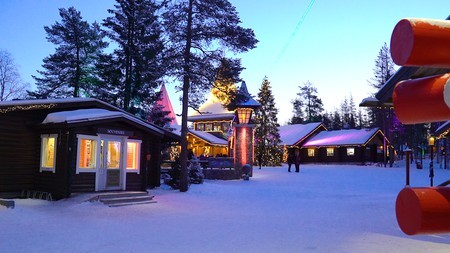 How to get to Santa’s Village

Once you get to the town centre of Rovaniemi there are a number of ways of getting to the Santa Claus Village. You can get a bus, take the hourly Santa Express, hop in a taxi or even walk the 8km (5-mile) route and arrive by foot. If you want to get Christmas started earlier still, it’s worth noting that the nearest airport is only 3km (1.8 miles) from the village itself!

As well as meeting the big man himself, you’ll also get a chance to greet his furry friends. Taking a reindeer ride on an enchanted sleigh is a great way to get your bearings, especially if you’re heading to the Post Office. All letters sent to Santa in Lapland end up here, with the Finnish postal service redirecting post to the sorting office. ‘Elves’ work at the post office with some mail managing to make it to Santa’s home with nothing more than a picture of Father Christmas on the front of the envelope. 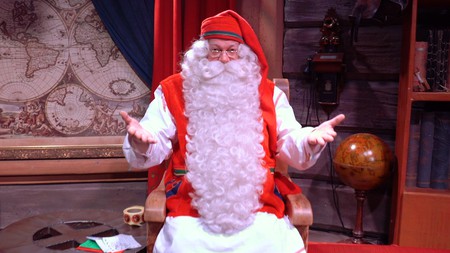 There’s nothing quite like seeing Santa in his own home. Visitors to Rovaniemi can get a personal message and send letters from the official Santa Post Office

The story of Rovaniemi

Santa Claus’ original home is in the mysterious location of Korvatunturi (Ear Fell). Given that the Claus family are keen on keeping this home a secret, Santa established an easily accessible outpost in 1985.

The history of Rovaniemi itself is a lot more somber. The town was completely destroyed during World War II, with then-American first lady Eleanor Roosevelt visiting in 1950 as part of the rebuilding process. A purpose-built cabin was quickly erected and still stands to this day… next to Santa’s Post Office.

Today the village is one of the most popular attractions in Lapland, with an igloo hotel, snowmobile rides and ice sculptors keeping visitors entertained.

The Arctic Circle runs through Santa’s village in Rovaniemi. It is the southern most latitude at which the sun can remain consistently above (or below) the horizon. In summer this results in the phenomenon known as midnight sun and in winter this means Kaamos which is also known as polar night. 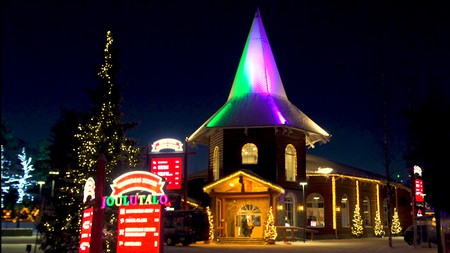 Santa’s Village sits on the Arctic Circle, which in summer means perpetual sunlight

Finland is a popular destination for Northern Lights hunters, and the Aurora Borealis are regularly visible from Rovaniemi. The best time to see the spectacular astral light show is from mid-August until early April.

In Rovaniemi itself you can check out the fun offerings at Snowman World. The frozen town of snow and ice has its own chilled bar, ice slides and restaurants, many of which serve traditional Finnish dishes like salmon soup.

There are also dedicated photography tours aimed at those looking to capture the ever-elusive northern lights. Other tours on offer include snowmobile safaris that are an adrenaline-fuelled way of crossing the Arctic Circle.