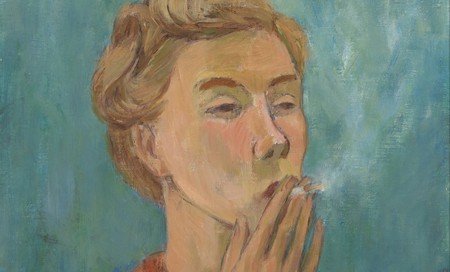 The Moomins are beloved the world over, but what do we know of their creator, Tove Jansson, a Finnish artist, illustrator and writer who confronted societal taboos from female equality to same-sex relationships. As London’s Dulwich Picture Gallery celebrates Jansson’s life work, we take a closer look at an artist overshadowed by her own creation.

Helsinki Art Museum is home to four of Tove Jansson’s murals. These exquisite frescos aren’t so well known outside of the artist’s homeland and reveal to an international audience who have been entranced by Jansson’s loveable plump characters that she was more than just the creator of the Moomins.

Painted for different commissioners, including a children’s hospital, an electrical factory and a restaurant, they reflect her vibrant vision, her love of Matisse and her opinion that art could help one relax. 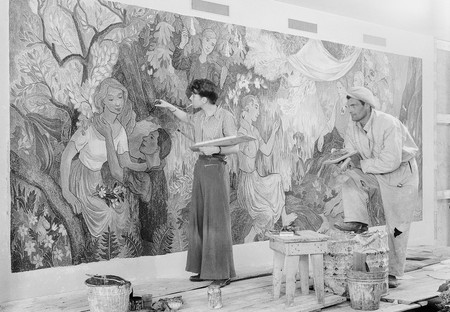 Born into a family of creatives – her mother, Signe Hammarsten, was a Swedish illustrator and her father, Viktor Jansson, was a sculptor – it was only a matter of time before Tove Jansson’s vivid imagination would lead her down the path of becoming an artist too.

She was 15 when she started painting. On completion of her studies at the College of Applied Art in Stockholm, she returned to Finland to study at the drawing school of the Finnish Art Association at the Ateneum. One of her earliest paintings Mysterious Landscape (1930), rendered in moody blue hues, is actually an exploration into storytelling, transporting the viewer to another sphere similar to that of make-believe, where the mystical and unknown exits.

But her paintings were also an outlet for capturing her mood and, most importantly, a form of self-expression. Self-portraiture, in particular, was a genre Jansson returned to throughout her career as it enabled her to reflect on personal feelings and relationships with the world and loved ones around her. As with Smoking Girl (1940) or Lynx Boa (1942), the genre gave her a platform where she could exude self-defiance, willpower and determination. 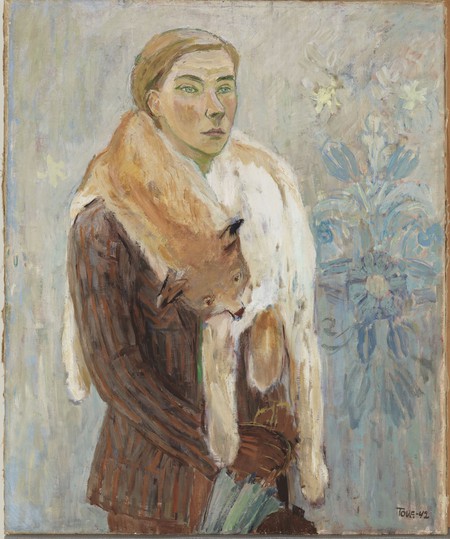 One of Jansson’s most exceptional and revealing works is her group portrait of her entire family. Painted during the Second World War, it’s symbolic of both the conflicts of war and the dynamics of a family. Centrally positioned, Jansson paints herself wearing all black as if in mourning, while she is flanked on either side by her artistic parents as her brothers in the foreground battle out a game of chess. Its colour palette and application of paint is in keeping with her her self-portraits. But it also feels as if Jansson has positioned herself to assert a new era, both morally and artistically. 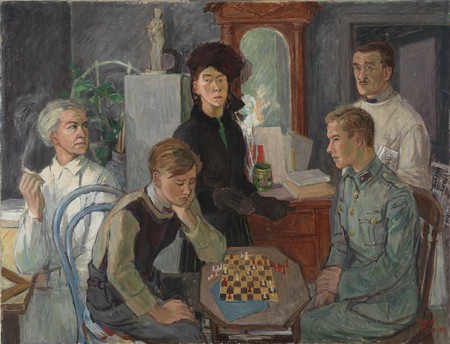 As her niece, Sophia Jansson, who is also creative director of Moomin Characters, said: ‘It was hugely important to Tove that she be recognised as a talented artist in addition to being the creator of the Moomins. Balancing her painting and her other projects alongside the demands that the Moomins made of her was something she struggled with all her life.’

The exhibition, which completes its international tour at the Dulwich Picture Gallery, reveals an artist at various stages of her artistic practice. From the youthful, keen-eyed painter who held a love for the Impressionists to an artist ever-changed after the Second World War. 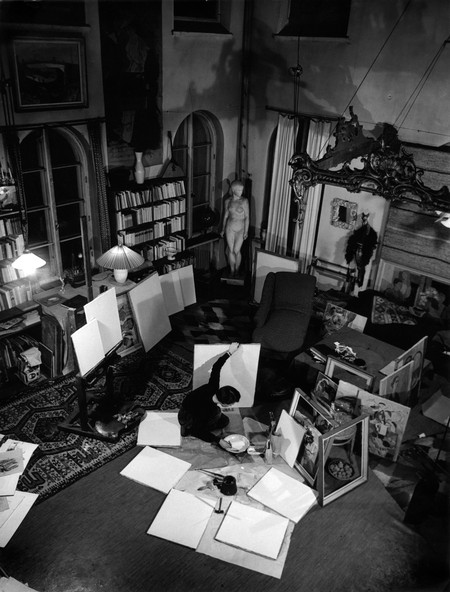 Tove Jansson in her studio | © Per Olov Jansson

Like her mother, from whom she no doubt got her drive and rigour, Jansson also produced an abundance of illustrations in varying styles. In addition to greeting cards, she designed postcards and worked for multiple magazines and papers.

Her adeptness for caricatures caught the eye of the political satire magazine, Garm, which became a publication she regularly contributed to (she illustrated over 50 of the magazine’s covers). Her illustrations, in contrast to her paintings, gave her an avenue to depict her contempt for political injustices and the affairs of war. The idea that Scandinavian countries were neutral is counterbalanced by Jansson’s brave determination not to be silenced by oppressive regimes such as the Nazis and she didn’t shy away from openly expressing her opinion. The self-assured artist even published her work under her own name. 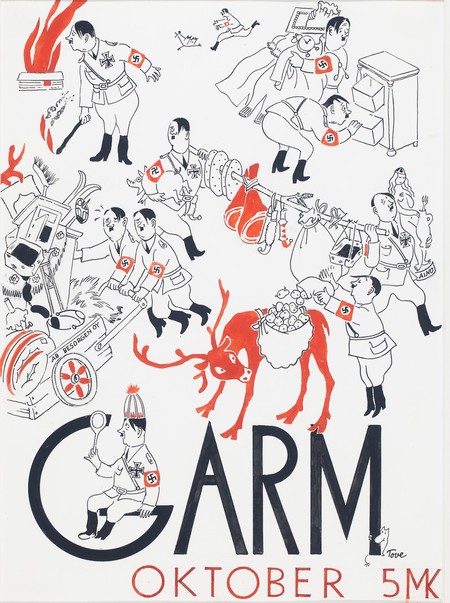 It would be on the cover of Garm that Moomintroll would make one of his first appearances. He could be easily missed with all the thieving Hilters, but sneaking around the bottom of the letter ‘M’, is a small large-nosed creature peering out from the cover.

The war had an enduring impact on Jansson and ultimately it gave her the backdrop to her first two Moomintroll books. Her experience of waiting nervously in bomb shelters informed Comet in Moominland and The Moomins and the Great Flood, the latter of which is a disaster story that involves a quest to discover a lost Moominpappa. Considering these were children’s books, the themes of epic annihilation meant they weren’t commercially successful. She fortunately found a new publisher who would take the risk for her to create her third book, Finn Family Moomintroll, which enabled the Moomins to live on and eventually gain international acclaim. 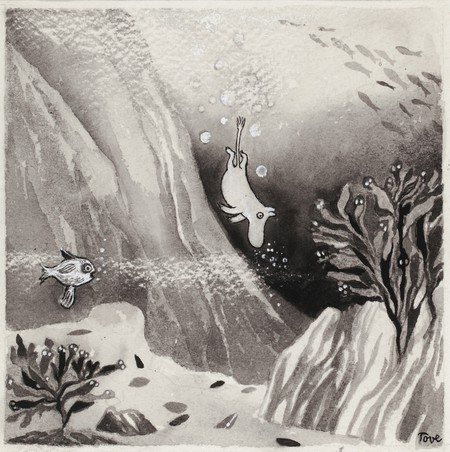 Tove Jansson, Illustration for the book Comet in Moominland, 1946

The Finish scenery, with its forests and woods and its archipelago on which Jansson sailed, all feature heavily in her work and understandably influenced the look of Moomin Valley. The Pellinki islands are of particular importance. A small rocky island, Klovharun is where Tove and her partner Tuulikki Pietilä spent their summers for nearly three decades. 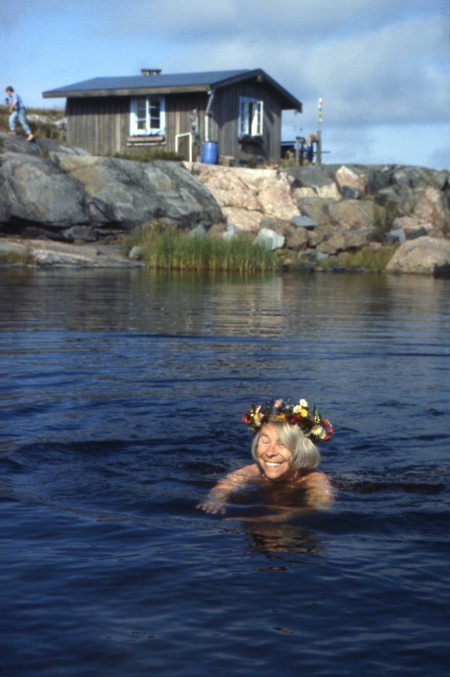 The Moomins also gave Jansson the opportunity to explore a variety of topics, from morals to personal relations. Many of her characters were informed and openly representative of close friends and lovers. Theatre director, Vivica Bandler, with whom Jansson had a secret affair, inspired the character of Thingumy, who was always accompanied by Bob (who was actually based on Tove herself). And Jansson’s long-term life partner, Pietilä, inspired the positive-thinking Too-Ticky.

Today, the Moomins continue to fascinate and enchant and, although Jansson returned to her first love of painting at many points in her career, she’ll always be best remembered for the strange creatures that endured and succeeded in the face of any obstacle put in their path.