An Alternative Guide to Helsinki and Its Best-Kept Secrets 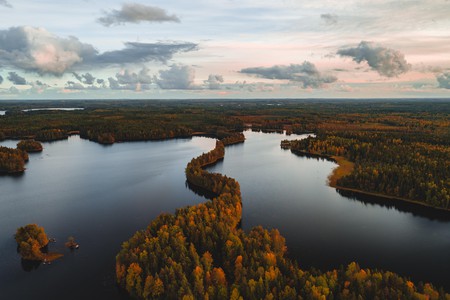 From deserted islands to hidden cocktail bars, here are the 10 secrets you need to know about Finland’s capital.

Easy to explore on foot, Helsinki is sandwiched between dense forests and the Baltic Sea, charming visitors with its unique architecture, dynamic food scene and unspoilt coastline. One of the fastest-growing cities in Europe, it’s quickly becoming a popular weekend-break destination. Yet, there are still undiscovered corners far from the tourist trail if you know where to look. Here are 10 of the city’s best-kept secrets only a Helsinkian would know.

Discover a free sauna in Kalasatama

Helsinki is not short on saunas, as most Finns enjoy going to one at least once a week. However, the one at Sompasaari is unlike any other in the city. Located in the derelict harbour district of Kalasatama, which is currently being transformed into a residential area, the sauna was created illegally without a permit after friends discovered an abandoned sauna shack perched on the water’s edge. It has been dismantled by the city and rebuilt more than once, but is now allowed to remain and is maintained by volunteers. Free to use and open 24/7, the laid-back sauna also has a grilling area; visitors can bring some drinks and sausages for an impromptu barbecue after a bracing dip in the sea.

During the summer months only, walk around the waters of Töölönlahti to its eastern shore to stumble upon a tiny blue shed. This open-air café not far from the sea has panoramic views over the city and serves great breakfasts, excellent coffee and home-made cakes. If the weather’s good, choose a traditional Finnish blueberry ice cream to eat on a seat under the trees. Alternatively, be brave and sample the smoky “terva” flavour, made with edible tar from the tree sap of burning wood; from medicine to coating ships, it has been used in Finland for centuries. Afterwards, walk through the charming Käpylä district, lined with red wooden houses built for workers in the 1920s.

Soak up the sun on Kivinokka beach

Though Helsinki may not be known as a beach destination, there are several sandy stretches of coastline near the city that are ideal for cooling off on hot days. Swerve the popular Hietaranta and Pihlajasaari beaches, and head to picturesque Kivinokka in the Vanhankaupunginlahti area instead. Deep within a forest and only a short walk from Kulosaari metro station, there are nature walks here, allotment gardens and tiny wooden holiday cottages, as well as a golden-sand beach. If you want even more seclusion, head to the very tip of the Kivinokka peninsula for sweeping views that are best seen at sunset.

Right in the middle of the city centre near the cathedral is Helsinki’s cosiest bar (that is if you can find it). Decorated as a 1920s London detective agency, Trillby & Chadwick is a secret speakeasy hidden behind a plain wooden door on Katariinankatu. Look for the blacked-out windows, then go inside and call the bar using the vintage telephone. If there’s space, you’ll be directed into a dimly lit bar adorned with luxe velvet sofas to sip cocktails flavoured with everything from popcorn to chickpeas. Note that no pictures are allowed inside.

If the creative urge strikes in Helsinki, take the M2 metro north from the university to Kalasatama. The Suvilahti cultural centre, a two-minute walk from the station, is a former power plant where exhibitions, pop-up events and gigs take place. There is also a skatepark and a 100m (328ft) graffiti wall, which everyone is free to add to. Alternatively, you can stand back and marvel at others’ astonishing work. In this once-abandoned part of the city, graffiti isn’t just allowed, it’s actively encouraged. So bring some spray cans if you’re hoping to leave your mark.

Take a time out at Kamppi Chapel

Also known as the Chapel of Silence, the Kamppi Chapel is in the middle of the busiest area in Helsinki. However, many visitors still don’t realise there is a chapel right in front of them. In one corner of Plaza Narinkka, at the entrance of the Kamppi shopping centre, the chapel looks more like an unusual sculpture than a building – a looming curved shape made of wood with no windows. Intended as a place for meditation and peace, it is an extraordinary example of Finnish design. It is free to enter and welcomes people of all religions to take time out from the busy streets outside.

Shop for bargains at the Hakaniemi Market Hall

Helsinki’s central Market Square is one of the city’s main tourist destinations, but if you really want to find a bargain, walk 20 minutes north to Hakaniemi Market Hall in vibrant Kallio. The original market hall opened in 1914, and today, it sells everything from freshly baked bread to handmade jewellery over two floors. The upstairs has non-food items. As it’s closed for renovation until the end of 2020, the market’s vendors are currently using a temporary space next door. Go hungry and fill up on the doughnut-like pastries called munkki, which are sold at one of the many outdoor stalls. Afterwards, snap up Finnish souvenirs and picnic food. On Sundays, a flea market filled with local artisans and street food, including a stall selling salty Finnish liquorice, takes over the square.

Escape to your very own island retreat on Sisä-Hattu

If you want to be alone and take in unique views over Helsinki, this tiny island off the coast of Lauttasaari is usually deserted and unexpectedly serene. With no bridges or ferries to the island, only go if you’re prepared to get your feet wet. You’ll need to wade through shallow water at low tide to get there, but it’s worth the effort. Watch boats sail by to the mainland, spot centuries-old rock carvings made by sailors and enjoy a picnic to the sound of lapping waves, knowing you have a little corner of Helsinki all to yourself.

Learn to forage like a Finn with a day trip to this beautiful national park carved by glaciers; it’s located 100km (62mi) outside the city. On this tour led by wilderness guides Taiga Times, which takes place between August and October, you won’t need to worry about eating anything poisonous. You’ll be taught to spot Finland’s three prize mushrooms: the trumpet chanterelle, golden chanterelle and penny bun. When you have collected enough, the guide will even cook them over a campfire for lunch for the freshest and tastiest meal you will ever eat.

Get spooked at Helsinki’s very own ghost town

Once a summer retreat for the wealthy, Kruunuvuori is now Helsinki’s spookiest site, with palatial villas left abandoned and half-ruined, surrounded by a thick forest just 3km (2mi) from the city centre. First developed in the late 19th century, it was bought for redevelopment in the 1950s but fell into ruin when the owner was not granted permission to build on the land. Now, this creepy corner is half-hidden by a forest and is said to be haunted. However, it offers a fascinating glimpse into Helsinki’s history, with beautiful views over the sea and city centre beyond.