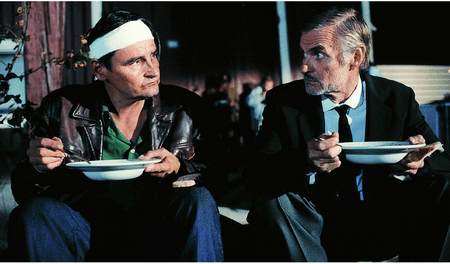 The Man Without A Past | © Pyramide Productions

Since the 1980s, Finland’s most prolific writer-director Aki Kaurismäki has been responsible for roughly one-fifth of the country’s cinematic output. His laconic deadpan humour and trademark melancholy has defined Finnish cinema internationally. However, with rumours of an imminent retirement, could Finland be about to say goodbye to its auteurs’ auteur?

Kaurismäki began his career in the industry when he set up a production and distribution company with his elder brother Mika, after working a number of menial jobs including dishwasher, postman and amateur film critic. Co-directing a number of his brother’s films in the early eighties, he learnt the necessary staples of auteur filmmaking. His unaided debut came in 1983 with a brave and distinctive adaptation of Dostoevsky’s Crime and Punishment. Transferring events to the present day; the film centres on slaughterhouse worker Rahaikenen, who is forced to live with the moral and practical consequences of murder. Atmospherically lugubrious and minimalist in style, Kaurismäki laid the foundations for his work over the next thirty years.

Kaurismäki’s directorial swagger exponentially increased with his next creative endeavour; the ‘Proletariat Trilogy‘ which included Shadows In Paradise (1986), Ariel (1988), and The Match Factory Girl (1990). Set in Kaurismäki’s native Helsinki, each piece is a cultural vignette of Finland. Focusing on one of the director’s favourite subjects, all three films feature portraits of the morbid existence of Finland’s working classes.

Filled with dirt, grime, and detritus, Kaurismäki’s vision of Helsinki is less than flattering. In Kaurismäki’s films, most of the capital’s inhabitants dream of escape from the prison their city has become. Characters speak little and when they do it’s usually clutching a bottle and muttering words lackadaisically. Kaurismäki allows his characters to silently stew and wallow in the hopelessness of everyday life, preferring actions to speak louder than words and using striking yet simple imagery.

Kaurismäki’s films, however, are more than just depressing fables. The man himself said in an interview with The Guardian, ‘When all hope is gone, there is no reason for pessimism’. They hinge on faint subtextual whispers of comedy and the affirmation which comes in the hope for a happy ending. Whether or not that ‘fairy tale’ comes to fruition is a gamble the audience has to take.

One of Kaurismäki’s most notable works was the surreal road trip genre flick Leningrad Cowboys Go America (1989). Donning shark fin quiffs and ridiculous winkle pickers, the action follows the fictional Russian rock band The Leningrad Cowboys. In hopes of ‘making it’, the group travel the highways and byways of America unleashing their alternative brand of eardrum-smashing anthems on the unsuspecting populace. Proving it’s not all gloom and doom, Kaurismäki exhibits a more eccentric side of his personality in a film riddled with typical Finnish humour.

The Man Without A Past (2003) is perhaps Kaurismäki’s most definitive work to date. The story follows an unnamed man who falls asleep on a train. Arriving in Helsinki the man is brutally beaten by muggers. Waking up in a hospital with horrific injuries and amnesia he has to start his life completely from scratch without shelter, or friends. Back to his morbid best, the film was critically acclaimed throughout the international art house world. It received the Grand Prix at Cannes and won the Academy Award for Best Foreign Language Film. However, Kaurismäki exhibited refreshing contempt for Hollywood pomposity, refusing to attend the Oscars because he claimed he didn’t feel like partying in a country currently in a state of war.

Similarly refusing to accept the Oscar nomination for his 2006 hit Lights in the Dusk, it then took another five years to see the Finn’s most recent offering Le Havre, his seventeenth film in total. Kaurismäki has effectively begun to scale back his involvement in the industry and has admitted that he will be retiring after his twentieth feature film, begging the question of who will take his place as Finland’s auteur in chief?