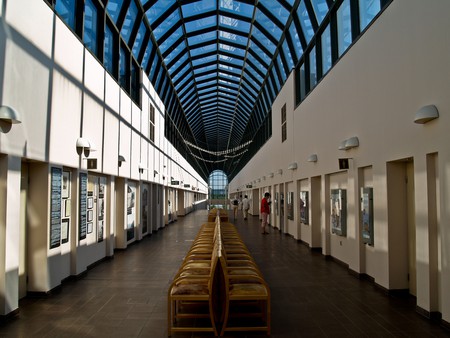 The landmarks of the northern city of Rovaniemi are notable for their architectural value and beautiful modern design. This came about after around 90% of the city was destroyed during World War Two. Less than a week later, a restoration plan was already being prepared by Finnish architect Alvar Aalto, who redesigned almost the entire town with his “reindeer antler” plan, with streets branching off in the shape of a reindeer’s antler. These are some of the best landmarks in the city that display modern, functionalist architecture.

The most significant museum in the city is also an architectural wonder. Arktikum opened in 1992, with the main entrance building added in 1997, and is notable both for its crescent-shaped main building and the Arctic Garden. This 172 metre-long structure is half buried in the ground, resembling wildlife burrowing underground during winter, and is made up of over 1,000 panes of glass designed to draw attention to the Lapland skies and often gives clear views of the Northern Lights. 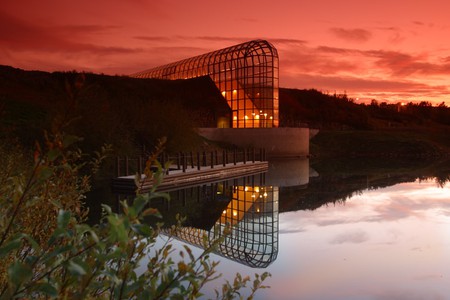 View of the Arctic Garden at sunset. | © Arktikum / WikiCommons

One of the first completed buildings from Aalto’s reindeer antler plan, the public library opened in 1966 as a new public space for the restored city. Most of the library is held on the first floor, shaped so that the librarians have a full view of the entire library, and there is plenty of natural light, even during Rovaniemi’s dark winters. The upper, fan-shaped level contains the lending hall and reading room, so that people browsing books do not disturb those who are reading or studying. 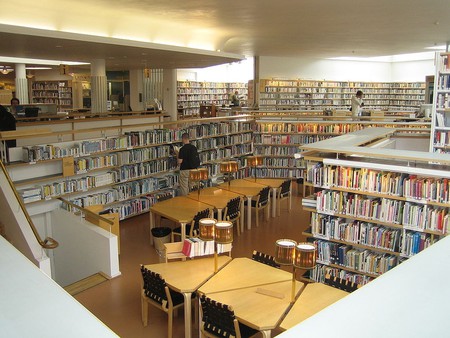 Lappia Hall was also designed by Alvar Aalto and opened in stages between 1972 and 1976. It serves as the main part of the Rovaniemi administration and cultural centre, which also includes the library and town hall. It contains the city theatre, concert hall, congress hall, music school, radio station, and provincial museum and also connects to the neighbouring library. The outside is notable for its sweeping roof brightened by blue lights and tiles from the Finnish Arabia ceramics factory. The foyer floor is made from Lappish marble while much of the furniture came from Finnish furniture makers Artek. Most of the interior was given a blue and white colour scheme, which is not only simple and elegant but also reflects the colours of the Finnish flag.

Opened in 2011, the science museum and central office for the Finnish Forestry Administration is highly reflective of Finland’s growing environmental concerns. While Rovaniemi’s old wooden architecture was destroyed during the war, Pilke re-introduced the trend of wooden buildings, usually reserved only for summer cabins, with 90% of the building being constructed from Finnish logs. This gives off only a third of the carbon emissions of a concrete or steel building of the same size. In addition, the straight, smooth lines fit in well with the rest of Rovaniemi’s modern architecture while the wood blends in with the surrounding natural landscape. 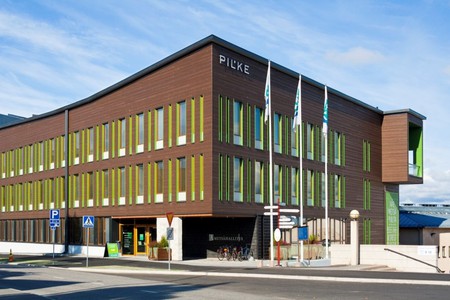 The third and final part of Alvar Aalto’s administrative and cultural centre, the Town Hall was one of the last buildings designed by Aalto before his death in 1976 and was completed by his wife Elissa. It was inaugurated in 1988. Among the architectural features include a corner window, which is lit by night and symbolises the ever-present eye of democracy, and a high council chamber shaped like a crystal shard. Again, the building uses limestone, a large number of wooden accents, and Artek furniture. It is designed to be light and spacious, providing brightness during dark times.

The Jätkänkynttilä Bridge, or The Lumberjack’s Candle, is Rovaniemi’s iconic bridge connecting the town centre to the East and is often the first sight visitors from the south see when arriving in the city. The bridge is 320 metres long and opened in 1989 as the first cable-stayed road bridge built in Finland. It gets its name from its two main pillars shaped like a lumberjack’s candle, which is a log cut and lit to create a large candle. The pillars are lit at all times like these candles, reflecting both the city’s logging heritage and lighting it during the darkest parts of winter. 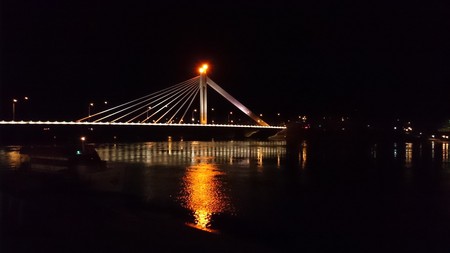 The Lumberjack's Candle lights up at night. | © pikkuanna / Flickr
Give us feedback