A Guide to Helsinki for Art Lovers 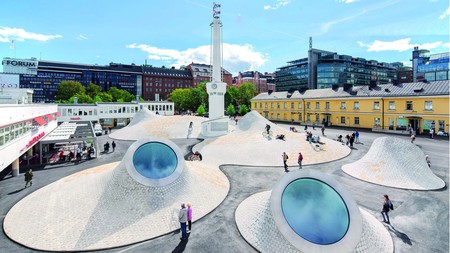 An underground museum whose roof has been turned into a skate park, Amos Rex is committed to art and socialising | © Mika Huisman2

Get the inside track on Helsinki’s creative scene with help from local artists, curators and expert guides – as they recommend the city’s hottest galleries to restaurants with artistic flair.

June 2021 saw the opening of the first-ever Helsinki Biennial, putting the capital of Finland firmly on the art map. Creatives from across the world gathered to explore the artistic landscape of Helsinki via a host of digital artworks, performances and virtual reality experiences. However, the art scene is not just limited to the Biennial; it’s a dynamic and diverse part of the city, reflecting a rich heritage and cutting-edge contemporary culture.

Well-known museums such as the Ateneum offer an adventure into Finnish art through the ages, but there’s also so much more that makes Helsinki a must-visit for art lovers. We spoke to local guides, artists and curators for their tips on the best places to eat, drink and stay in this creative Nordic hub.

Things to see in Helsinki 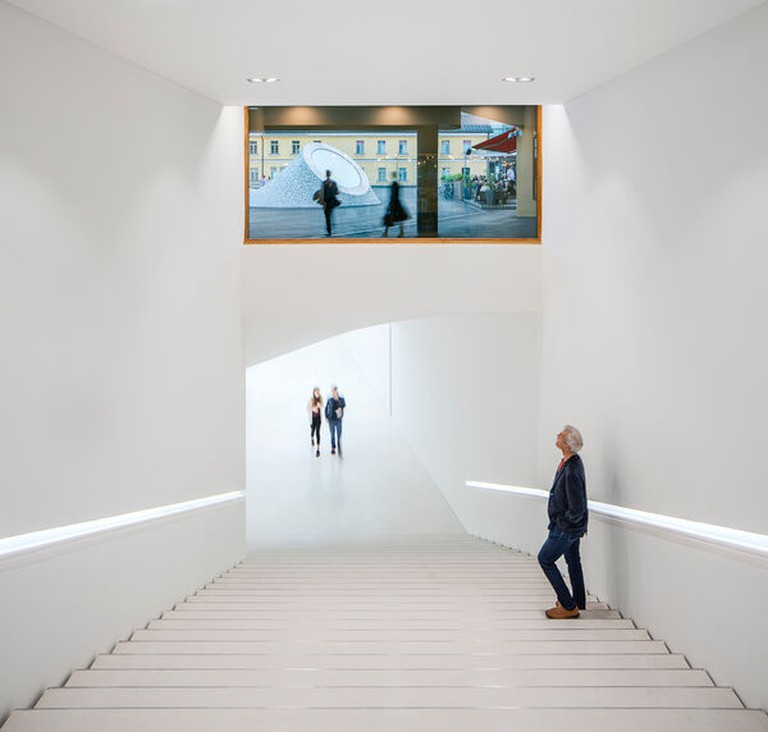 Made up of two parts – a subterranean museum and the renovated Lasipalatsi office building – Amos Rex is at once dedicated to art and the pursuit of simply hanging out. The underground museum bubbles up from the ground of Lasipalatsi Square to create a playful urban space, with Helsinki residents repurposing the undulating landscape as both a central picnic spot and a skate park. Inside, the exhibition programme at Amos Rex spans experimental contemporary work and art dating from antiquity.

Visual artist Raija Malka, who collaborated with composer Kaija Saariaho to exhibit their multisensory work Blick here in summer 2021, tells Culture Trip about the building’s fascinating history: “It was built originally as a restaurant and pavilion for the 1940 Olympics (which, of course, did not happen). The building was going to be demolished in the 1990s to make way for an office tower. Luckily, this did not happen, and the Amos Anderson Foundation has finally given the building the dignity it deserves as a hotspot of Helsinki’s innovative art and design scene.” Malka recommends that visitors catch a movie at the in-house Bio Rex cinema and peruse the shops surrounding Lasipalatsi to discover the work of local designers. 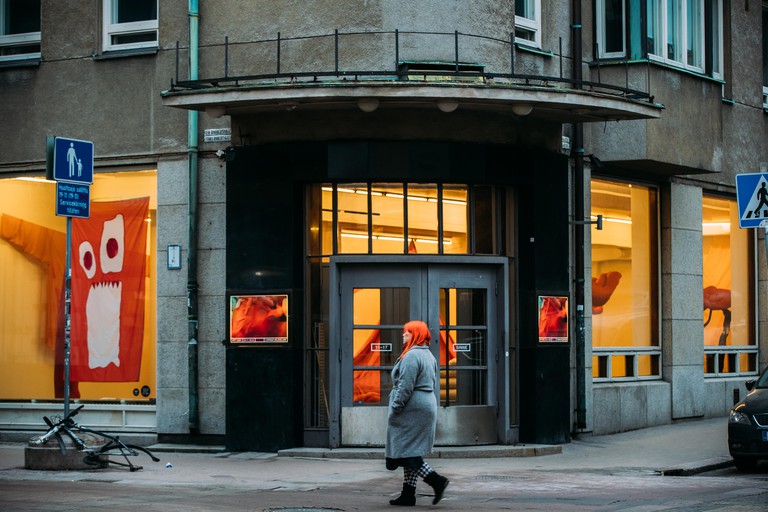 Malka also suggests taking the short stroll over from Amos Rex to Galleria Sinne, run by the Pro Artibus Foundation and set in Helsinki’s Design District. Here, you can get a taste of Finnish and international contemporary art; the focus is on young and experimental pieces – think intriguing video works and object installations – that local artist Anna Tuori describes as “conceptual and unpretentious”. 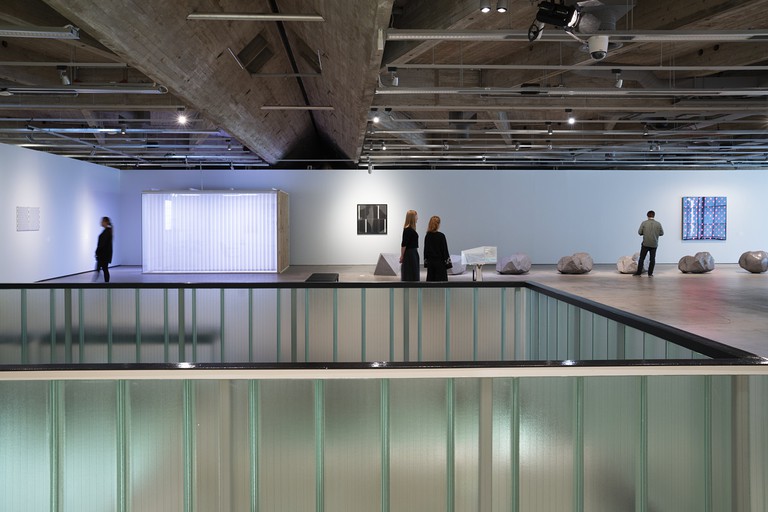 Head out of the centre of Helsinki (via the Tapiola metro station) to visit the Espoo Museum of Modern Art (EMMA). Set within the WeeGee building, designed by modernist architect Aarno Ruusuvuori, EMMA is Finland’s largest art museum, with gallery space covering over 5,500sqm (59,201sqft). Exhibitions showcasing Finnish and international modernism, together with contemporary art and design, meet another mainstay of Finnish life – the forest – which surrounds the gallery and interacts with the art, courtesy of panoramic windows. For a glimpse into a utopian world, step into EMMA’s garden and ascend the steps of Matti Suuronen’s spacecraft-esque yellow Futuro House.

Head to the Helsinki Art Museum 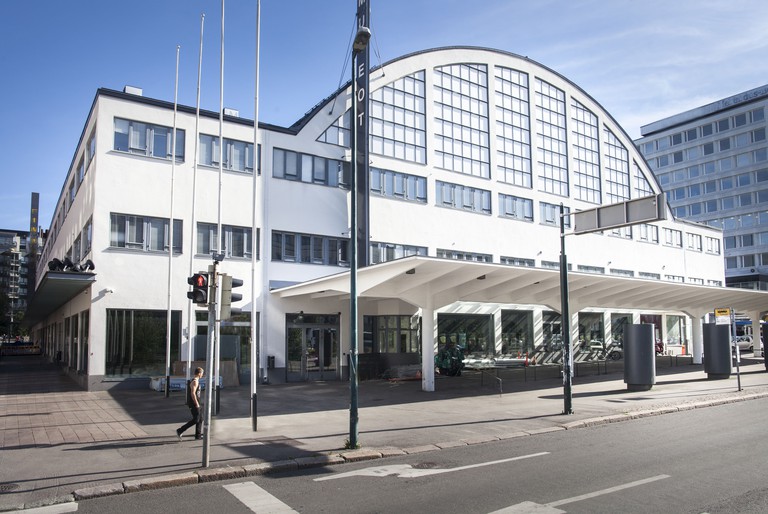 Responsible for a 9,000-strong art collection that belongs to the people of the city, Helsinki Art Museum (HAM) has no small task on its hands. Though nearly half of these works are on display in public spaces around the city, HAM’s main building is well worth an excursion. Housed in the Tennis Palace (also built for the ill-fated 1940 Olympics), HAM offers what Head of Exhibitions and co-curator of the Helsinki Biennial 2021 Siitari Pirkko describes as “exciting encounters with contemporary and modern art”. She highlights that HAM “often invites artists to create new works of art”, with an open call held every year.

When exploring HAM, Pirkko recommends that you make a beeline for the works of Tove Jansson (1914-2001). “They are amongst the most loved pieces in the HAM collection. Though she is perhaps best known as the creator of the Moomins, Jansson was also a painter and writer. HAM has dedicated one of the galleries to her frescoes, which are permanently on show there.” Before delving into her work at HAM, Pirkko suggests picking up a copy of Jansson’s The Summer Book for a glimpse of a quintessential Finnish summer.

Discover the evolution of Finnish art at the Ateneum 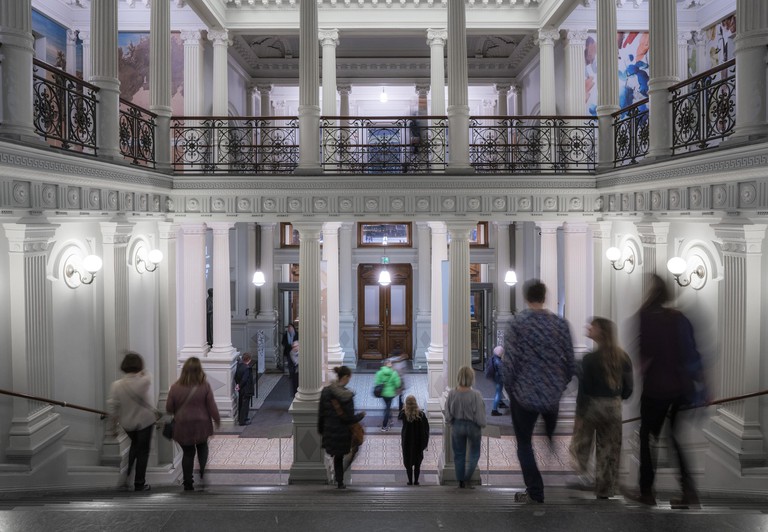 © Finnish National Gallery / Hannu Pakarinen
Got your fix of contemporary art? Head back in time at Helsinki’s best-known museum. No art tour of the city would be complete without a visit to the Ateneum, which is home to the largest collection of artworks in Finland and is one of three museums that make up the Finnish National Gallery. An afternoon here is a voyage through Finnish art from 1809 to the 1960s, with 20,000 paintings, sculptures, prints and drawings providing a window into Finnish national identity and history. Pro tip: fuel up for your adventure at the Ateneum at stylish bakery Kanniston, just around the corner.

Where to eat in Helsinki 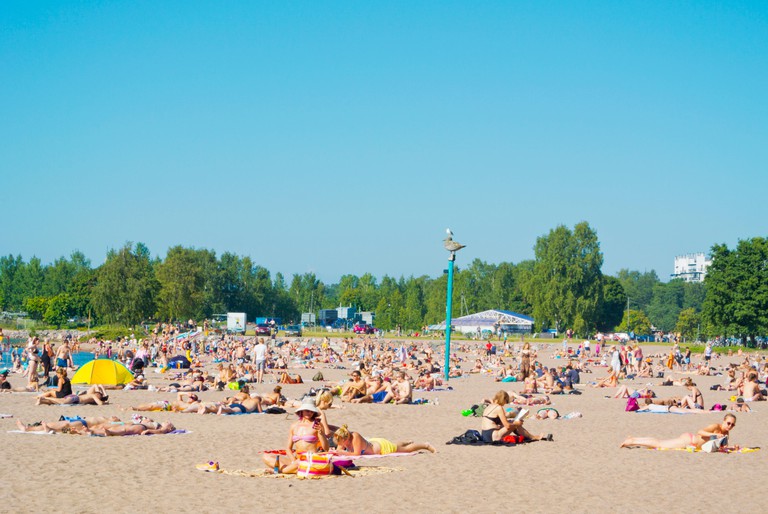 “Take tram no.2 to the Taka-Töölö neighbourhood and visit Hietsun Paviljonki,” says artist Sari Palosaari, whose 2021 installation Eons and Instants was part of the Helsinki Biennial. The old public changing rooms at Hietaranta beach have been transformed into a community centre, hosting a range of exhibitions, workshops and performances. To complete your beach experience, Palosaari recommends sampling some Pavilion ice cream – the perfect accompaniment to the waterside art. 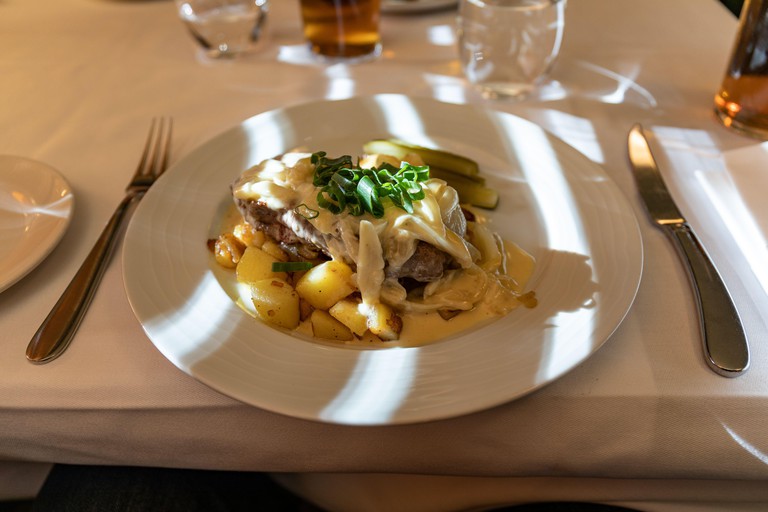 To make your grand entrance into the city’s artistic social scene, Malka thinks there’s nowhere better to begin than Elite. This elegant eatery/bar has served as a meeting place for artists, actors, writers and musicians since it opened in 1932. It serves both native and international dishes, such as the “Tauno Palo-style” sirloin steak with creamed onions and pan-fried potatoes. The dining room is adorned with artworks by some of its patrons. Alternatively, opt for a drink on the summer terrace.

Tuck into traditional cuisine at Kosmos 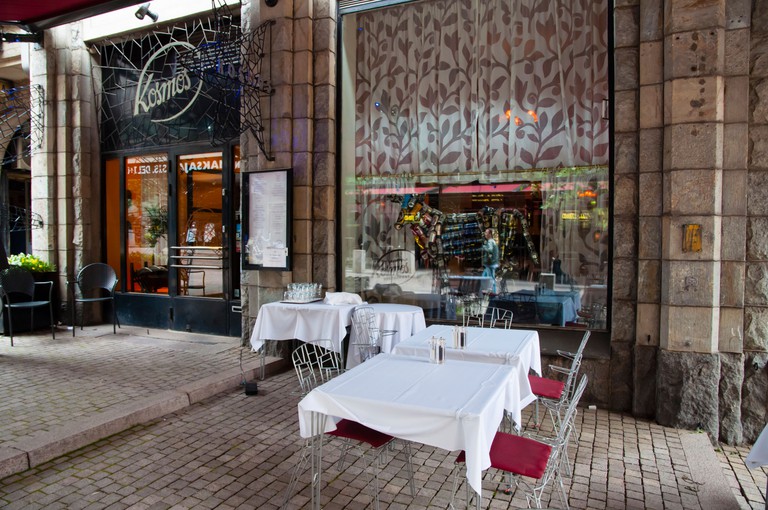 © Peter Erik Forsberg / Alamy
Another spot on Malka’s radar is Kosmos. Here, chefs pride themselves on creating a “Helsinki cuisine” built on Russian, Swedish and French influences, as well as modern takes on traditional Finnish cooking. Founded in 1924, Kosmos has endured a turbulent century, including prohibition, wartime rationing and even use as a mess hall by the German army. By the 1950s and ’60s, however, artists, journalists, authors and activists formed the main clientele, transforming the restaurant into one of the city’s key cultural hangouts. Today, you can admire art purchased for the dining room during this era, including works by Alvar Gullichsen, Martti Aiha and Juhani Harri.

Where to drink in Helsinki

Grab a cocktail and a movie at Riviera

Like your drinks with a side of film? Helsinki guide Heidi Johansson does too. To satisfy cravings for both film-inspired cocktails and quality viewing material, head up to Riviera: a bar and indie cinema in one. Half the fun of a visit is exploring the surrounding Kallio district, which Johansson describes as a “fun and happening part of town”, popular with young people, artists, and those who “find downtown a bit polished and neat”.

Check out the K1 space of the Finnish Museum of Photography. Past exhibitions here have included the photography of Stanley Kubrick and Finnish-Nigerian documentary filmmaker and photographer Uwa Iduozee. Plus, next to it, bar and restaurant The Glass is a prime spot for a pre- or post-photoshoot sharpener. Stay for the more-than-50 varieties of rum on offer.

Things to do in Helsinki

Get creative at Oodi 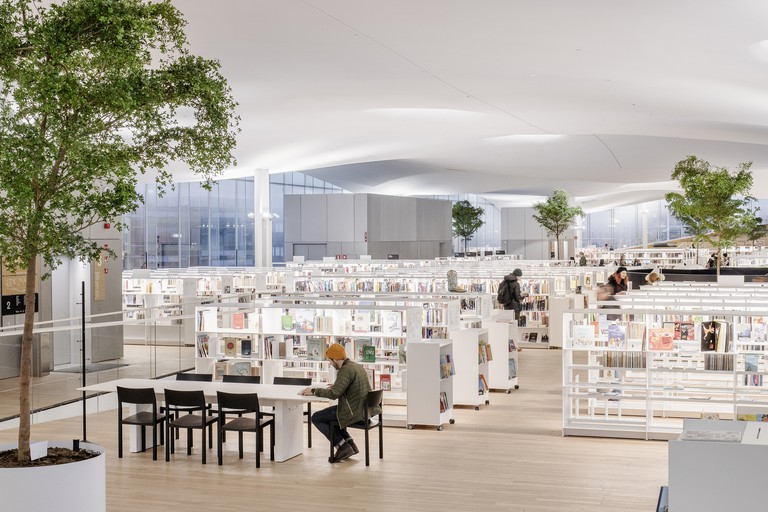 The Helsinki Central Library Oodi is more than just a library, says Johansson. In addition to around 100,000 books, it’s home to exhibition spaces, a restaurant, recording studios, a cinema and maker spaces, including a 3D printing workshop and sewing machines. “It is amazing how people really started using it as their living room,” Johansson explains. She recounts stories of meeting a family who were 3D printing a replacement after breaking their coffee spoon and a budding seamstress who came to Oodi to make her own curtains. With its location facing the Finnish Parliament intended to symbolise the relationship between the government and citizens, Oodi’s design process was suitably democratic; the city’s residents play an active part in choosing the design and facilities on offer.

Go on a treasure hunt for public art

Helsinki has so much public art, not least because the law mandates that one percent of building costs be dedicated to art. Beyond the works showcased at the Tennis Palace, HAM oversees close to 500 sculptures, monuments and artworks across the greater Helsinki area. Around 200 of these are set in functional everyday spaces, such as schools, health centres and libraries. While you may struggle to see them all, HAM’s public art map can help you plan your urban art odyssey.

Pick up a souvenir

Bring a little piece of creative Helsinki back with you by popping into the concept store at gallery Lokal, suggests Malka. Here you can pick up textiles, unique artwork and collectible design pieces. Johansson’s top pick is Glasshouse Helsinki, where Finnish design (from backpacks and scented candles to sweaters and crockery) meets sustainability.

Get a taste of the Helsinki Biennial 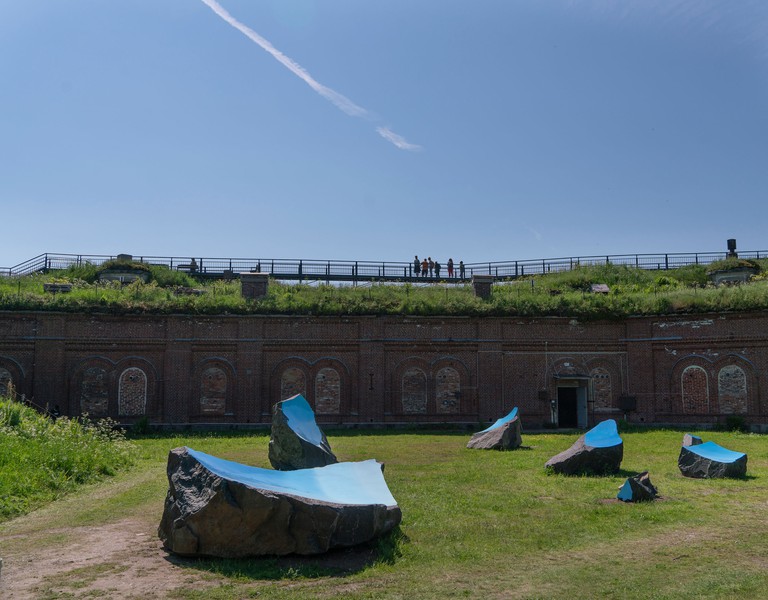 Sadly, no trace of the artworks will remain on Vallisaari, the former military island that played host to a large part of the Biennial. This is part of the event’s commitment to protecting the unique environment of the island. However, Tappola Taru, Head of Public Art at HAM, has a note of encouragement for any art lovers sad to have missed the Biennial. “Three works will be placed permanently in new residential areas in Helsinki – Alicja Kwade’s works in Kalasatama, and Laura Könönen’s sculpture installation in the Jätkäsaari area.”

Where to stay in Helsinki

Bed down at Hotel St. George 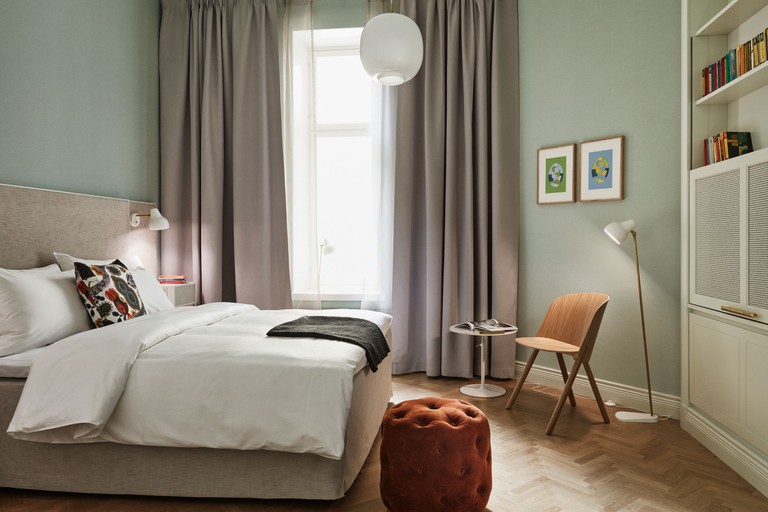 Why just visit an art gallery when you can stay in one? The swish Hotel St. George in Helsinki is home to some 400 pieces of art. On entering the hotel, you are met by Tianwu – a soaring white dragon sculpture by world-renowned Chinese artist and activist Ai Weiwei. Other works include Klaus Haapaniemi’s immense mural Lightnings in Tiger Woods and 6m-tall (20ft) metal sculpture Learning to Fly by Pekka Jylhä, both found in Hotel St. George’s Wintergarden room.

The Helsinki Biennial is running from 12 June to 26 September 2021 on Vallisaari Island, Helsinki. Entry to the event is free, however there is a charge for the ferry across.