28 Photos That Show the Calming Scenes of the Nordics 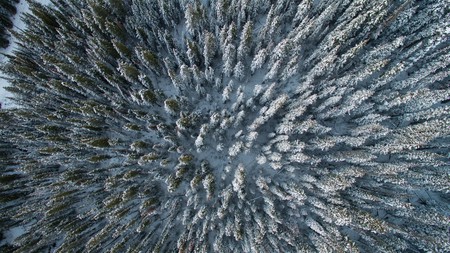 The amount of largely unspoilt scenery in the Nordic countries, which range from remote Arctic ice to busy modern cities, makes these countries ideal for exploration and relaxation. These photos display some of the best scenery and places to visit in the Nordic countries; Denmark, Sweden, Finland, Iceland, and Norway (we’ve included a few places in Greenland as well, since it is a part of Denmark).

One of the oldest surviving Nordic traditions is the lighting of a bonfire on Midsummer’s Eve, around June 20th. If you can’t make your own bonfire, one of the best public Midsummer celebrations is the festival at Seurasaari in Helsinki, Finland, where a bonfire has been lit every Midsummer for 60 years. 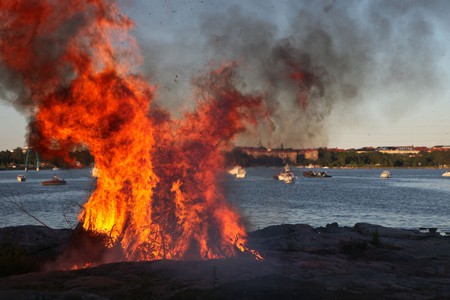 Oulanka in Finnish Lapland is one of the best rated national parks in Europe for its miles of forests, rivers, and cliff formations. During the summer you can hike or kayak through the park, and in winter it is covered in snow and ice and can be traversed by cross country skis or snowmobile. 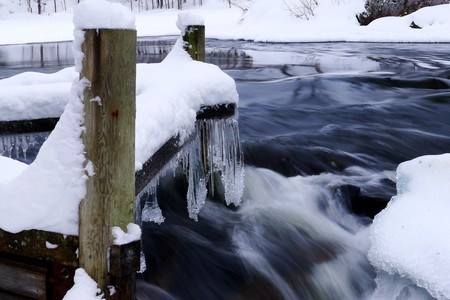 The cleanest lake water in Denmark comes about thanks to no agriculture or pollution drainage nearby. This makes the lake clear enough for swimming or just relaxing on the beach. 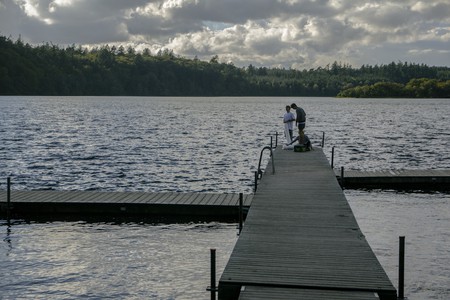 Beaches aren’t commonly associated with the Nordics, but Reynisfjara beach in Iceland proves this expectation wrong. It isn’t exactly ideal for sunbathing or swimming due to the ferocity of the waves but is more famous for its black basalt pebbles and columns from the volcanic bedrock and its cave formations. 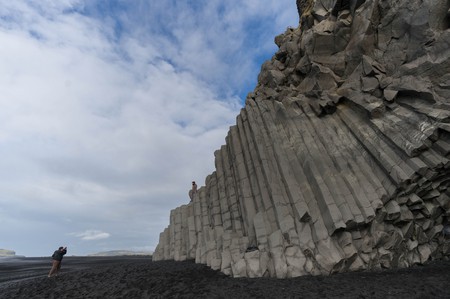 This string of islands on the gulf separating Finland and Sweden is remote enough from both countries to form its own culture and makes for a peaceful island getaway. 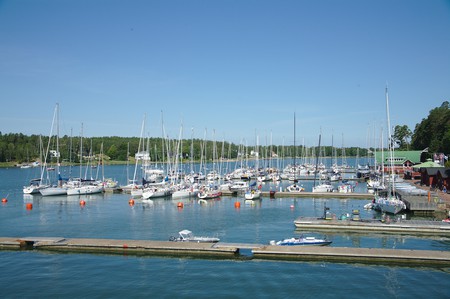 One of the most beautiful cities in Europe, the capitol of Denmark is known for its colourful buildings, range of architecture from different periods, cultural activities, and the tall ships in its harbours. 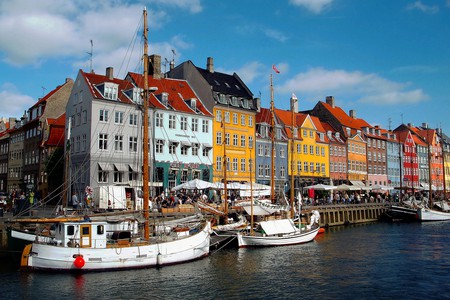 This Baltic Sea delta on Finland’s southern coast has some of the best birdwatching opportunities in the Nordics, with up to 220 bird species nesting in the area and hundreds of flowering plants. 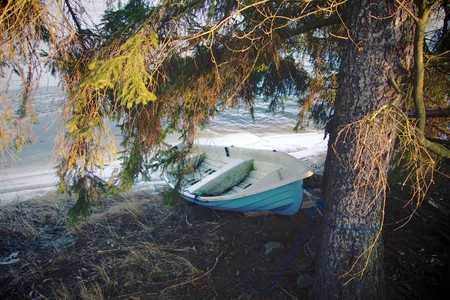 Helsinki’s Temppeliaukio Church or ‘Church of the Rock’ is one of the most architecturally interesting and marvellous churches in the Nordics. The chapel is built directly into the granite bedrock which forms the walls of the main room and is topped with a shining copper dome. 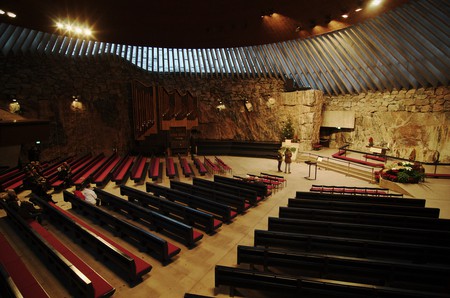 The largest of Norway’s world famous fjords is known as the Grand Canyon of Norway, as it has the same visual impact, yet with an added sense of magic. Surrounding the fjord are Viking villages and the world’s steepest railway. 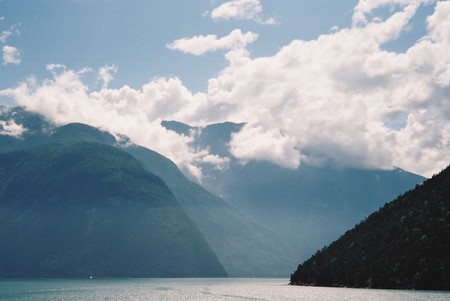 Borgund is one of the finest and best preserved examples of Norway’s unique stave churches and genuinely looks like something straight out of Lord of the Rings. The distinct climbing black towers, sloping wooden roofs, and runic inscriptions are an ancient wonder. 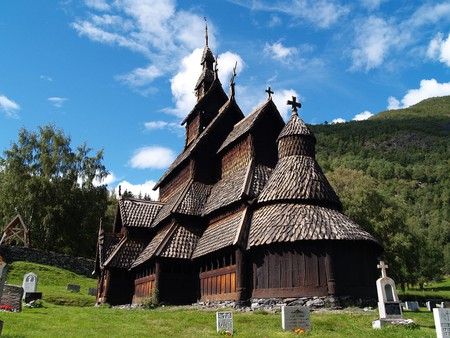 Longyearbyen in Norway is one of the northernmost towns in the world that you can visit as a tourist. The juxtaposition of the colourful buildings against the harsh Arctic landscape are fascinating in their beauty. 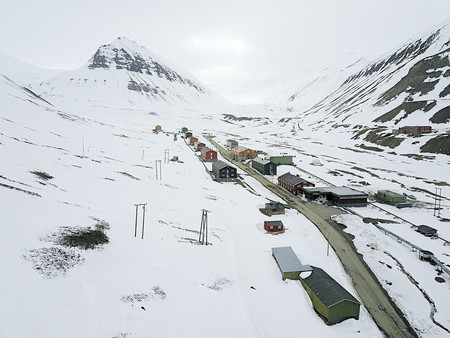 The largest and most spectacular Viking ship built in modern times, Draken was constructed by a team of enthusiasts using only ancient techniques. In 2016 Draken sailed from Norway to North America to prove that the Vikings could have made the journey 500 years before Columbus did. 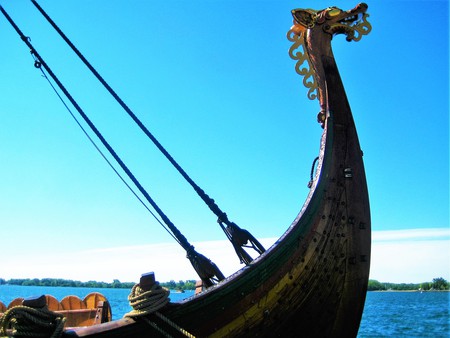 Norway’s second largest city is also one of its most dazzling; made up of multi-coloured buildings and surrounded by mountains and fjords. The city is full of classic structures and culture, most notably the fairy tale-like Gamlehaugen Castle, residence of the Norwegian royal family. 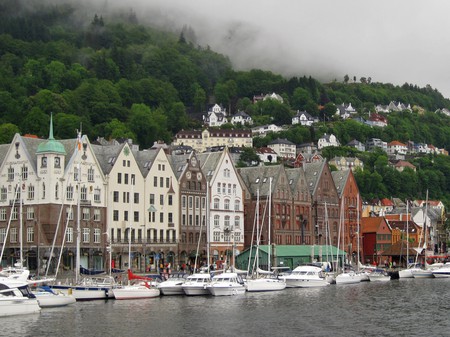 The second largest city in Denmark dates back to an 8th century Viking settlement and has grown up to become a bustling city which mixes historical sites with modern buildings. 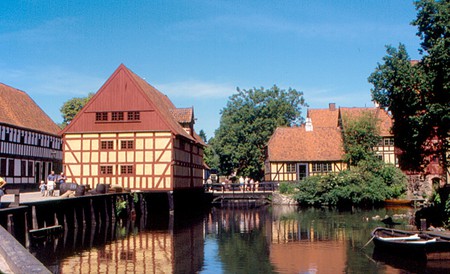 Much of the Nordics are still covered in natural evergreen woodland. One of the biggest to get lost in is the Rold Forest in Denmark, whose name means ‘Troll forest’. There you can see wildlife such as the magnificent red deer, the large collection of flora and fauna, and hike the many trails. 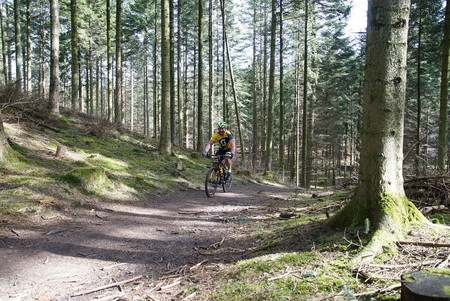 Palaces and gardens are also not commonly associated with the Nordics, but Drottingholm Palace in Sweden looks like it could be a location from a period drama. The 17th century palace was built in the French style and is the permanent home of the Swedish royal family, although much of it is open to visitors. 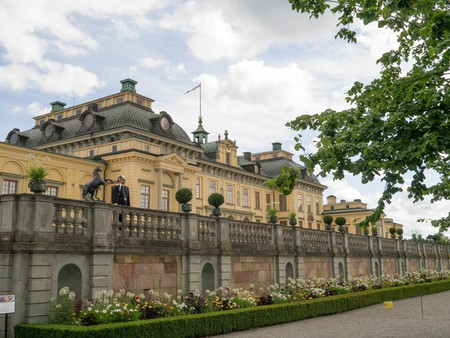 This island in central Stockholm contains many old buildings, museums, galleries, harbours, forests, and even an amusement park. This makes for a huge range of sites and activities suiting all tastes, as well as a pleasant atmosphere to walk around in. 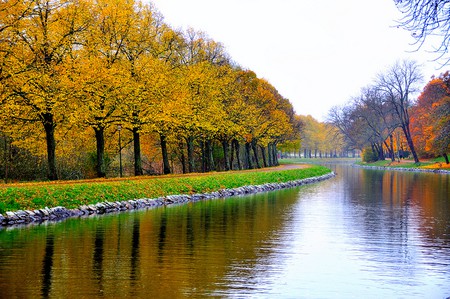 Sweden’s third largest lake contains such sites as the Drottingholm Palace mentioned above, Viking era settlements, and underwater hotel and has fascinating local folklore connected to it. 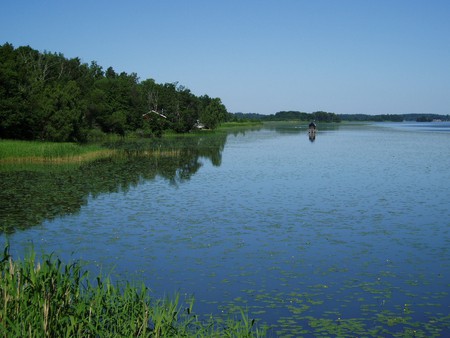 You’d better visit this beautiful Sami settlement soon, as it won’t be around for much longer, at least in its current location. The town has long been under threat of collapsing into a mine, so the solution is to move the town two miles away, which includes its Lappish style churches, ice hotel, old mansions, and space research centre. 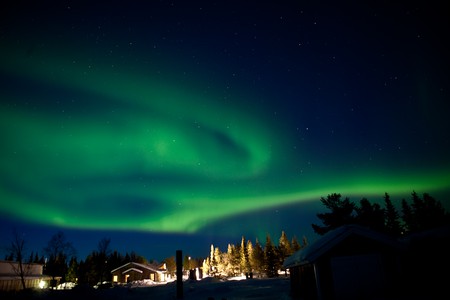 A gorgeous Romanesque cathedral based upon similar cathedrals in Germany and Italy. Lund Cathedral in Sweden is notable for its tall black towers, sweeping buttresses, astronomical clock, and figure of a mythical Swedish giant. 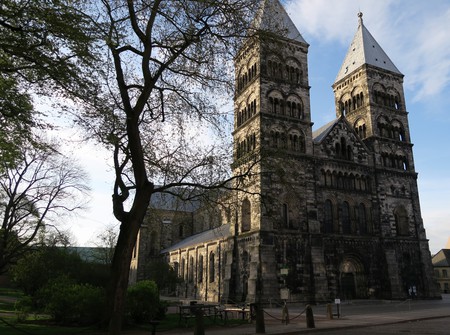 Iceland’s volcanos are commonly known for erupting unexpectedly and causing travel disruptions, but they are a magnificent sight to behold. The Krafla volcano and lava fields feature pitch black rocks, steaming craters, and the geothermal power station. 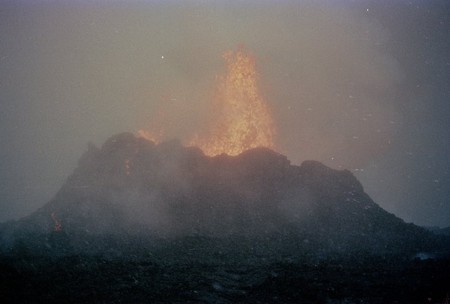 The waterfall at Skaftafell National Park in Iceland is one of the most visually unique natural formations on Earth. Centuries of erosion has created a surreal layered rock formation which is thicker at the top than the bottom and almost seems like it shouldn’t be physically possible. 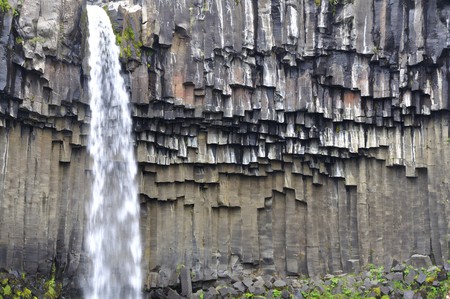 Possibly as close to the top of the world you can safely get, the Svalbard archipelago in far northern Norway is difficult to reach and has very few settlements. Yet if you can reach it, you will be treated to untouched Arctic scenery, old mining towns, and polar bears (which featured prominently in Phillip Pullman’s His Dark Materials series, where they built an ice fortress in Svalbard). 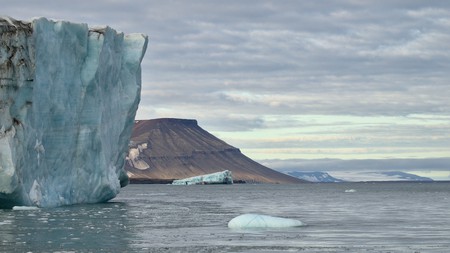 Another of Norway’s most popular fjords, Pulpit Rock is a cliff jutting out 600 metres above Lysefjord and is frequently regarded as one of the planet’s best viewing points. 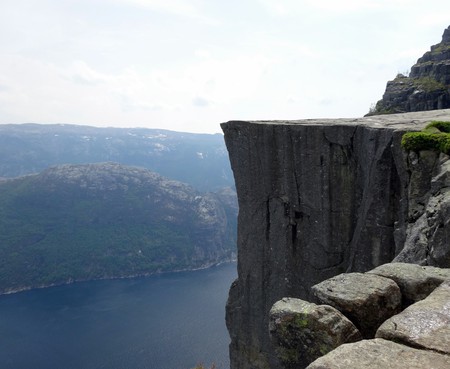 It is easy to forget that Greenland has fjords too. The Ilulissat ice fjord contains one of the world’s fastest moving glaciers, advancing 19 meters per day, and is covered by icebergs and clear Arctic waters. 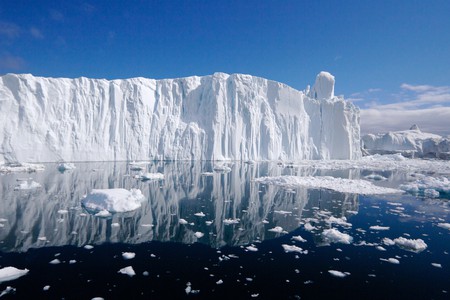 These natural hot springs have been used by Norse settlers for 1,000 years as it is one of the only springs in the country which is the right temperature for bathing. While lying in the pools, you can gaze at the surrounding mountains and watch icebergs pass by. 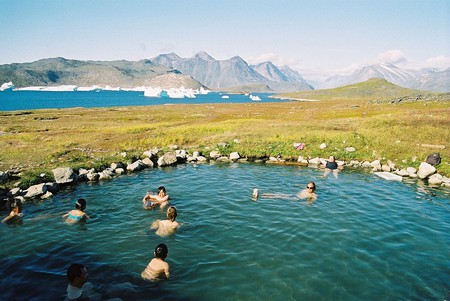 There are many ancient Viking ruins throughout Greenland. One of the best preserved is the Hvalsey Fjord Church near the country’s southern tip, which dates back to at least the early 15th century and contrasts remarkably with the stark and barren landscape. 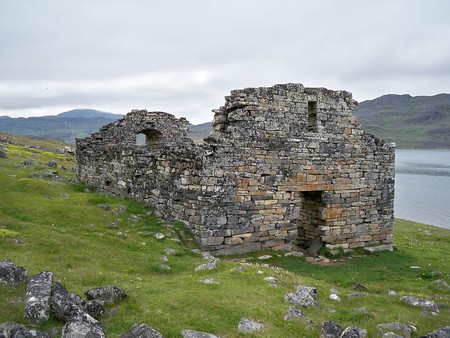 From the viewpoint at Koli National Park in western Finland, you can see miles of forests, lake systems, and the tall fells. You can also ski during the winter or tour the park by hiking, taking a lake cruise, or on horseback. 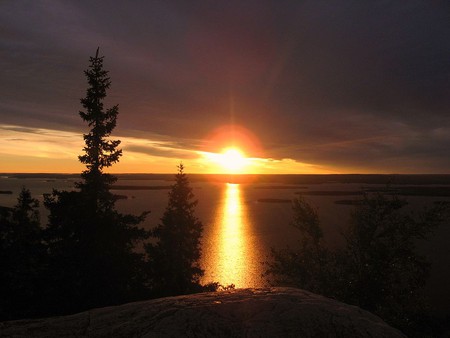