10 of Helsinki's Most Impressive Buildings

Helsinki is a heaven for architecture enthusiasts. The city holds beautiful examples from multiple eras of architecture, from old wooden structures to modern glass buildings. These are some of the best architectural wonders in Helsinki from different periods, which can all be seen on a day tour of the city. 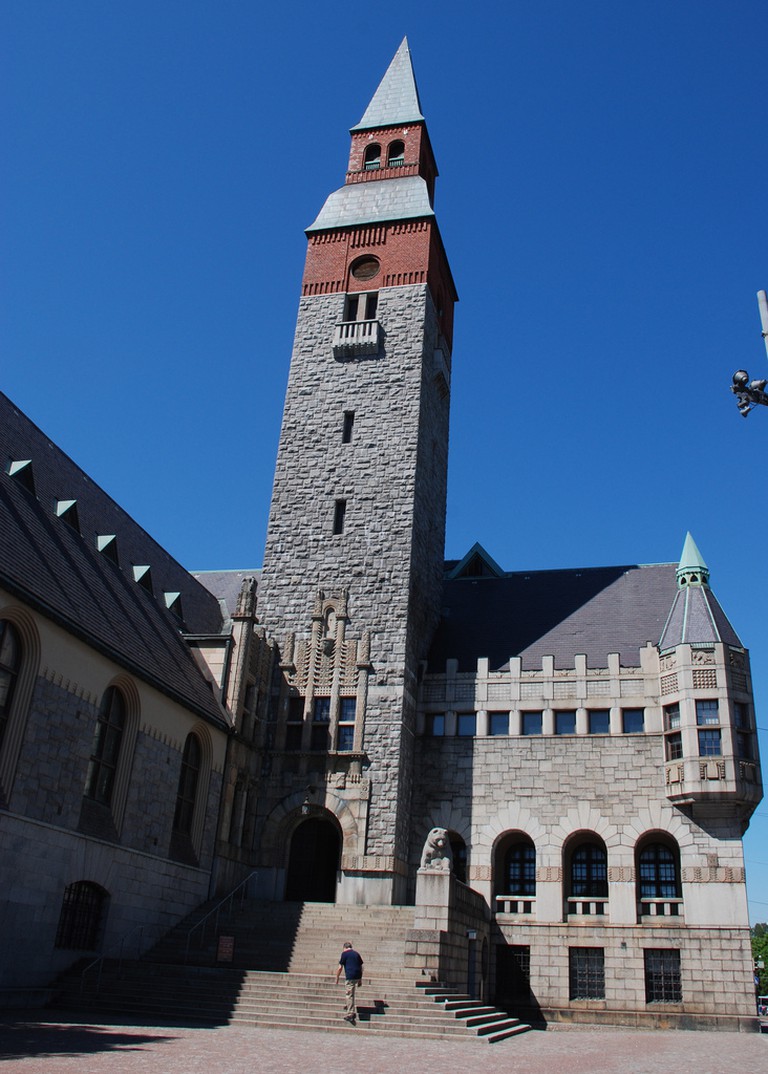 Main entrance of the National Museum | Amy West / Flickr
One of the most significant and stunning examples of national romanticism, the National Museum is notable for its grey granite stonework and its green tinged copper roof. It was designed by Herman Gesellius, Armas Lindgren and Eliel Saarinen and it was opened in 1916. Bullet holes are still visible in the doors from the Civil War only a few years after the museum opened. The ceiling of the main entrance is notable for its famous paintings of scenes from the Kalevala epic poem by artist Akseli Gallen-Kallela.
Open In Google Maps
34 Mannerheimintie, Helsinki, 100, Finland
+358295336000
Visit Website
Give us feedback 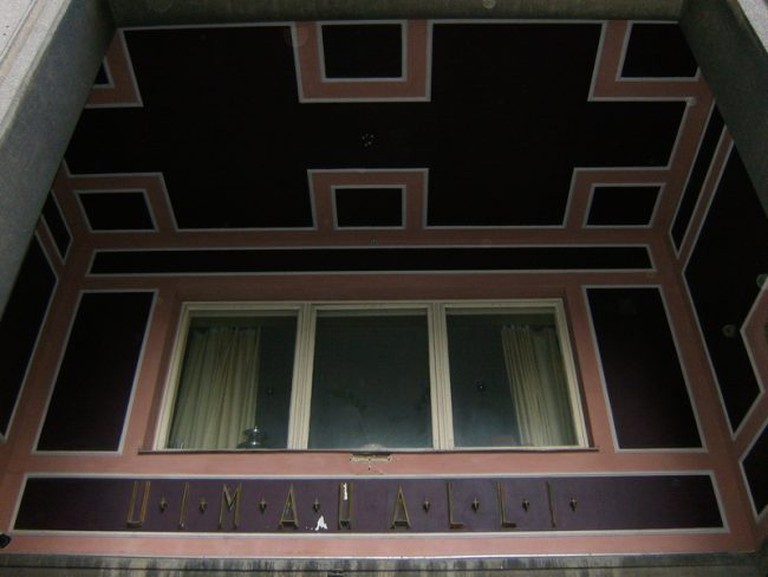 Part of the Swimming Hall interior | T Västinen / WikiCommons
Finland’s first public swimming pool was opened in 1928. Designed by Väinö Vähäkallio and based upon the Centralbadet swimming hall in Stockholm, it is a prime example of well-preserved Nordic Classicism architecture. The 2.8 metre high stove of the wooden sauna is believed to be the largest in Finland.
Open In Google Maps
21 B Yrjönkatu, Helsinki, 120, Finland
+358931087401
Visit Website
Give us feedback 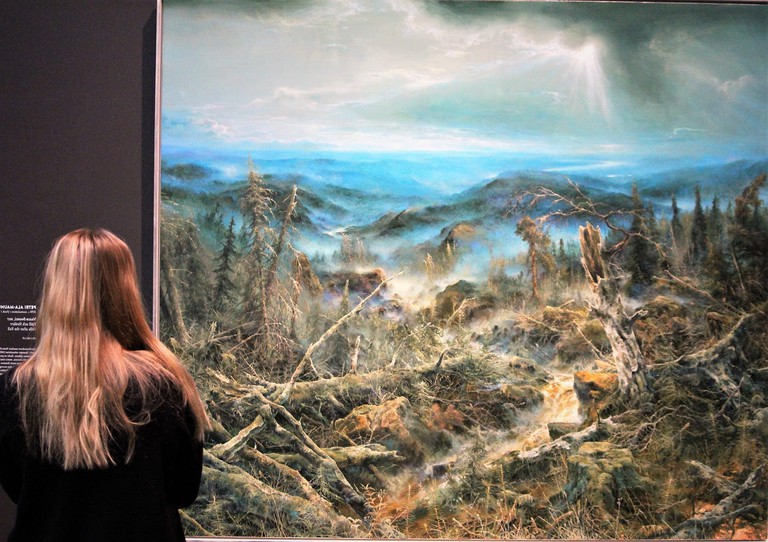 Exhibit at Ateneum Art Museum | © Ilkka Jukarainen / Flickr
The most impressive art collection in Finland is fittingly housed in one of the best buildings in Helsinki city centre. Opened in 1887, it is typical of the late Victorian period. The architectural plans were drawn up by Theodor Höijer and the exterior ornaments were made by sculptor Carl Eneas Sjöstrand. Above the main entrance stands a figure of the patron goddess of the arts, holding crowns of laurel which represent both arts and crafts. Today it is the main building of the Finnish National Gallery and contains mostly classic Finnish art.
Open In Google Maps
2 Kaivokatu, Helsinki, 100, Finland
+358294500401
Visit Website
Give us feedback 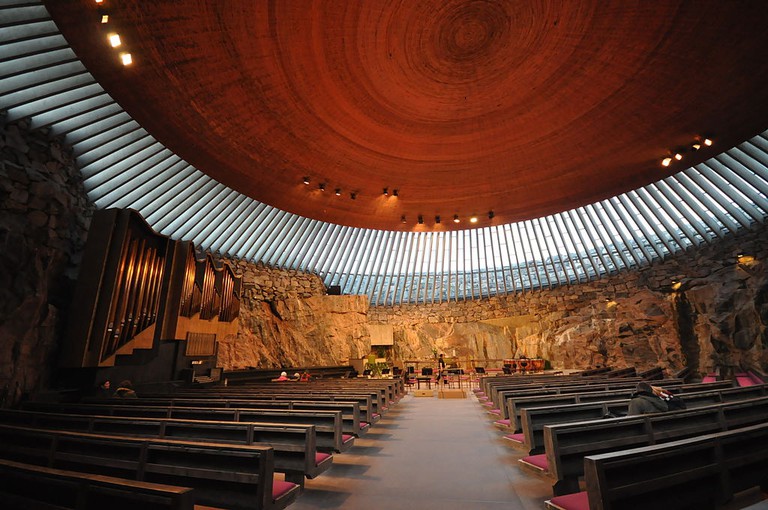 Interior of the Temppeliaukio Church | Jorge Láscar / WikiCommons
The ‘Church of the Rock’ is so named for its unusual gimmick of being built directly into its surrounding granite bedrock – which forms the walls of the chapel. The church came about after many failed attempts to build a church in the Töölö parish until the Suomalainen architect brothers Timo and Tuomo won the final design contest in 1961 and the church was opened in 1969. For such a small church, it still draws in droves of visitors who marvel at its architectural wonder.
Open In Google Maps
3 Lutherinkatu, Helsinki, 100, Finland
+358923406320
Visit Website
Give us feedback 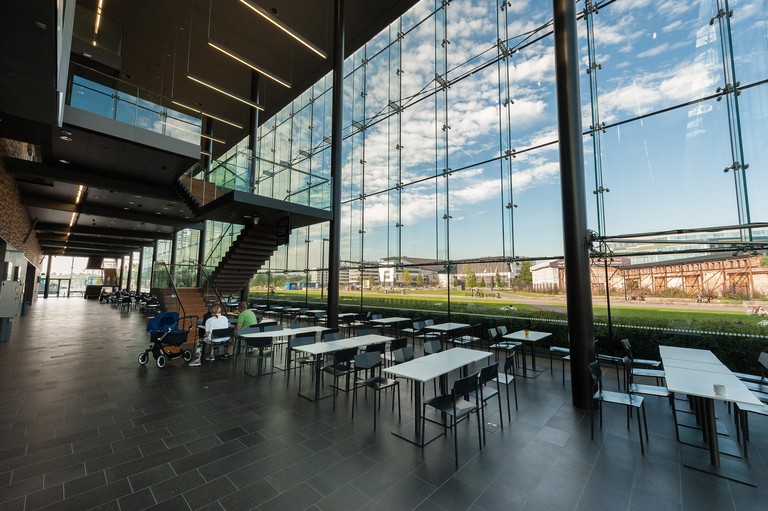 The open interior of the Helsinki Music Centre | Public domain / Pixabay
A good example of Helsinki’s modernist architecture, the Helsinki Music Centre is a concert venue made from a shining soundproof glass exterior and an open interior which allows for good acoustics. Plans for the building started in the early 1990s, when the Sibelius Academy requested the need for new premises closer to their existing buildings. Since the city lacked a concert hall, a design contest was held and won in 2000 by Arkkitehtitoimisto LPR-Arkkitehdit and the inaugural concert was held on August 31st 2011.
Open In Google Maps
13 A Mannerheimintie, Helsinki, 100, Finland
Visit Website
Give us feedback 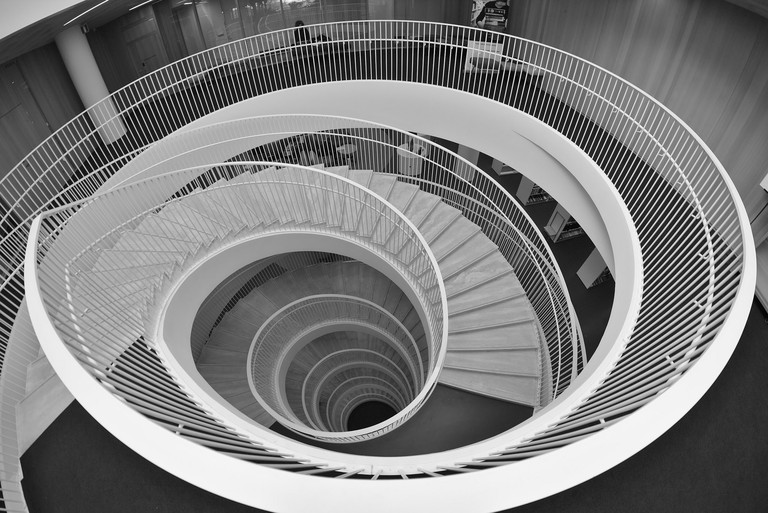 Staircase of Kaisa House | Lari Koponen / Flickr
The University of Helsinki contains many impressive buildings, but the award-winning main building of the University Library, known as Kaisa House, is one of the most notable for its sweeping modernist curves. Designed by Anttinen Oiva Arkkitehdit Oy and opened in 2012, it is now the largest university library in Finland and is open to both students and members of the public. The arched windows offer clear views of the city and a soundproofed zone allows for quiet study.
Open In Google Maps
30 Fabianinkatu, Helsinki, 14, Finland
+358294123920
Visit Website
Give us feedback

This private medical centre was designed by Lars Sonck and opened in 1905. It combines a golden stone exterior, a brown tiled roof, and a black granite bottom – all typical examples of Finnish Jugend architecture of the time period. The hospital and the area it is located in were named after the Icelandic goddess of medicine Eir. 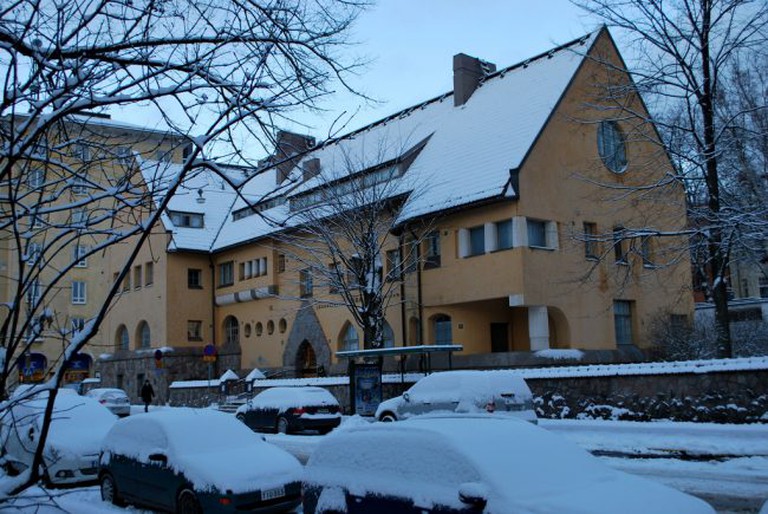 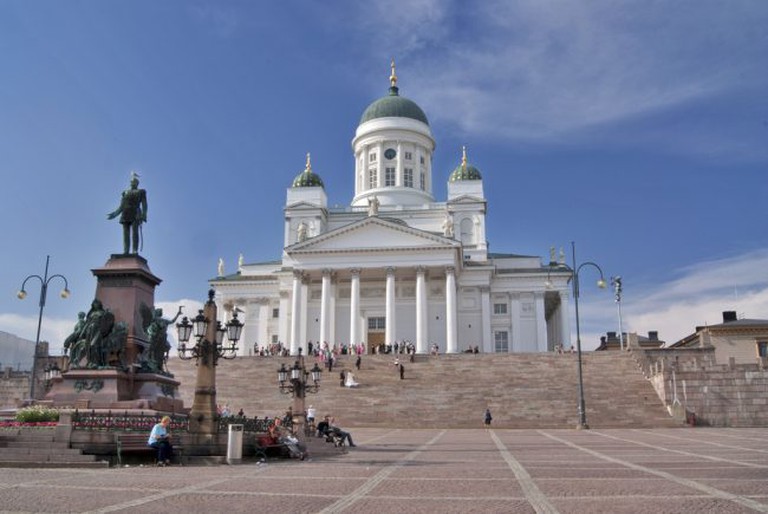 Helsinki Cathedral and the Senate Square | Anton Czernous / Flickr
One of the grandest and most recognizable buildings in Helsinki, Lutheran Cathedral is so impressive that it has become the symbol of the city and features heavily in its advertising and merchandising. The Cathedral sits at the top of the Senate Square, most of which was designed by Carl Ludvig Engel in a neoclassical style; with a white façade, a tall green dome and four smaller domes surrounding it. It was opened in 1852 as a tribute to Tsar Nicholas I, whose statue sits in front of the Cathedral, and was known as St. Nicholas’ Church until Finland’s independence in 1917.
Open In Google Maps
29 Unioninkatu, Helsinki, 170, Finland
+358923406120
Visit Website
Give us feedback

The telephone company building is known as Ympyrätalo or ‘Circle House’ due to its ring shape, and is the main office of the company as well as a multi-purpose building. It was opened in 1968 and designed by married couple Heikki and Kaija Siren; the influential architects who built and restored buildings not only in Helsinki but also Paris, Austria, Iraq and Japan. The restoration in the early 2000s was overseen by the son of the original architects. Another of their sons, Hannu Siren, made a minimalist sculpture which stands in the entrance to the building. 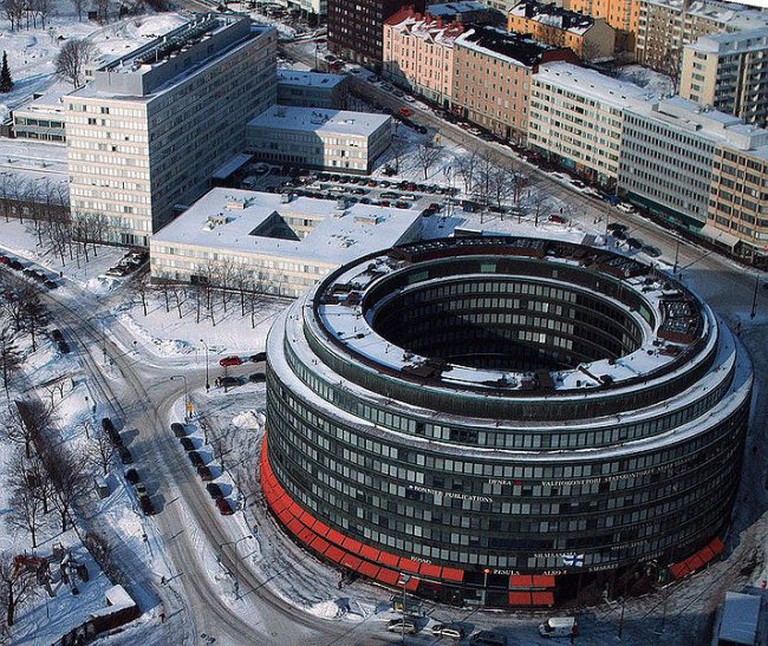 Ympyrätalo as seen from the air / Timo Noko / WikiCommons 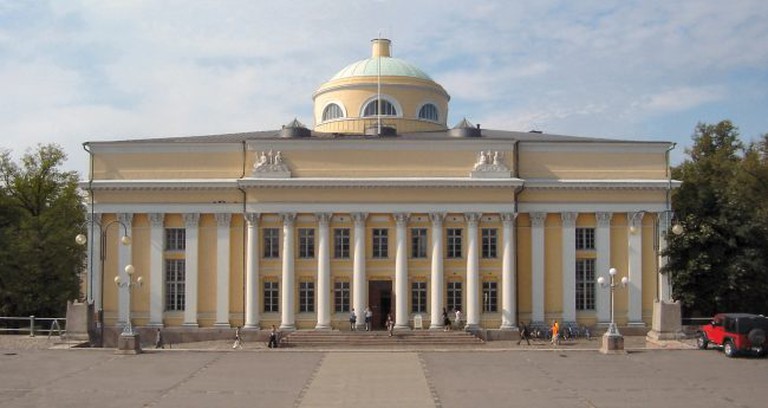 Exterior of the National Library | WikiCommons
The main building of the National Library is opposite the Lutheran Cathedral and also contains some of the finest examples of Finnish architecture. It was built in 1845 by Carl Ludvig Engel in the Empire style after the university and library were moved from Turku to Helsinki. The exterior has a golden yellow colour, Corinthian columns and a green dome. The interior is decorated with classical statues, paintings and marble.
Open In Google Maps
36 Unioninkatu, Helsinki, 170, Finland
+358294123196
Visit Website
Give us feedback
Give us feedback